You are here: Home / Feature / A testament to true love: David McLean honours his late wife with a long-lasting tribute

It was an endearing and enduring act of love.

After 14 hours of back-breaking manual effort over the course of three frigid days in the midst of a January cold snap, a beautiful stone bench now sits in a serene setting at the Dyer Memorial in honour of a beloved local woman. And though it was no small feat, it was but a blink in time compared to how long the result of those efforts will last.

Joanne McLean, co-owner of Soapstones and founder of the Enliven Centre for Well-Being in Cancer, died in July 2018 after a four-and-a-half-year battle with cancer. She and her husband, David, had many discussions about her wishes.

“In the last month of my wife’s life, I was giving her hospice at home and so was with her all the time,” says David, which gave them time to review all of her desires. Among them, “she wanted to be cremated and she wanted a tree to be planted on top of her ashes to fertilize the tree, essentially.”

In looking for a suitable location, David learned about the memorial tree plantings at the Dyer Memorial Forest, a property that is overseen by the Muskoka Conservancy. Although they don’t allow for ashes there, the McLeans still opted to have a tree planted in Joanne’s name. David and his son had planned to take her there in her last month of life to see where the tree would be, but she was too frail so David visited on his own.

“I was just blown away at how peaceful the setting was. And so I took video, I took still photos and I came back and I laid in bed with her and I showed her what I had taken and she said, ‘yeah, this is the place,'” recalls David. A small oak tree, her choice, was planted there in September 2018.

In his time there, David noticed that nowhere on the property was there a place to sit. And it so happened that another of Joanne’s desires was a memorial bench, similar in idea to one the family had made for their dog Spirit when she died about six years ago.

With the blessing of the Muskoka Conservancy, who approved both the design and the location, he enlisted local artist Rudi Stade to create a stone bench inscribed with a passage that David felt was fitting. It reads:

The Muskoka Conservancy doesn’t allow motorized vehicles at the Dyer Memorial, and the road to the site, which is tucked away in the woods north-east of Huntsville, isn’t plowed in the winter. So David and Rudi had the granite pieces hauled by trailer as close to the property as they could get. For the remaining one-and-a-quarter kilometres, they had to pull and push the heavy pieces on sleds. Uphill.

On the first day they got the stone up to the parking area below the memorial, as well as pulling some of the pieces up to the site. On day two, they hauled the rest of the pieces of the bench to its final location. And on the third day they assembled it. 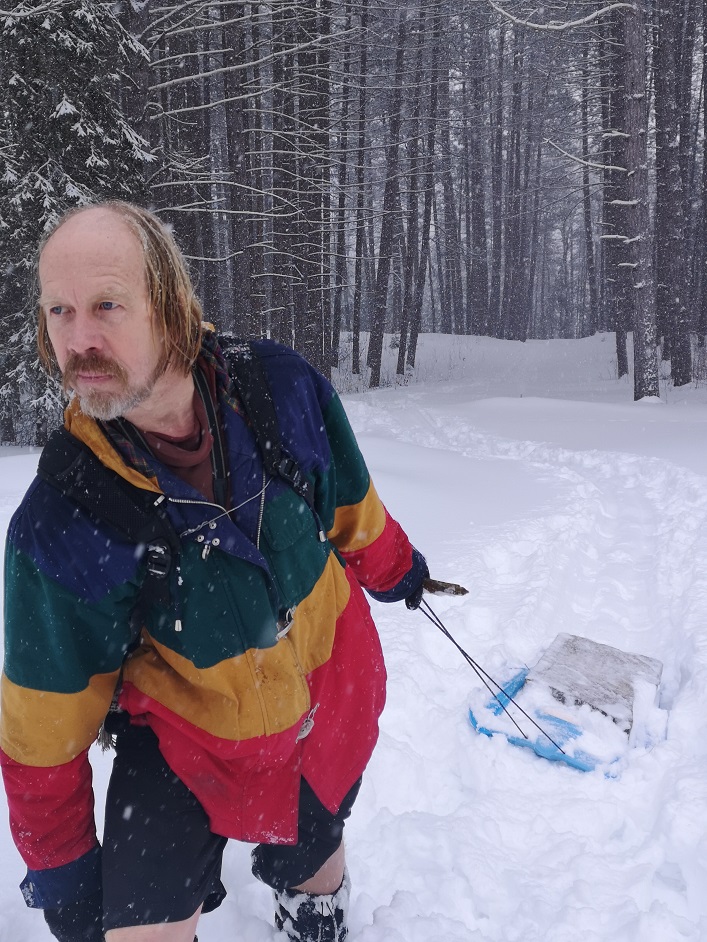 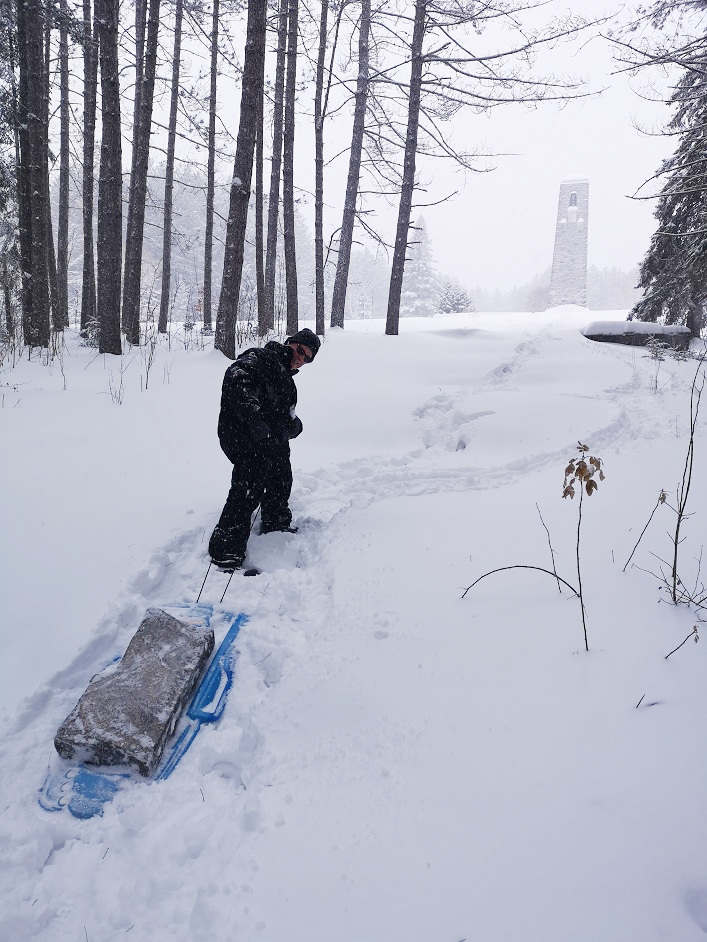 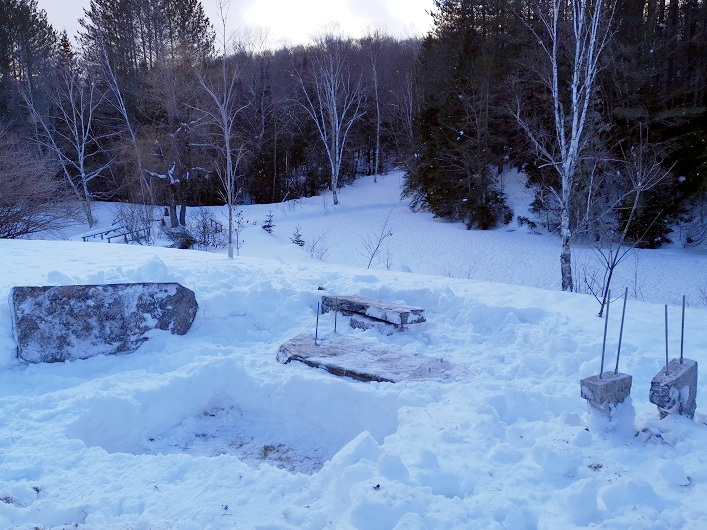 The bench overlooks a pond on the Dyer Memorial property (supplied) 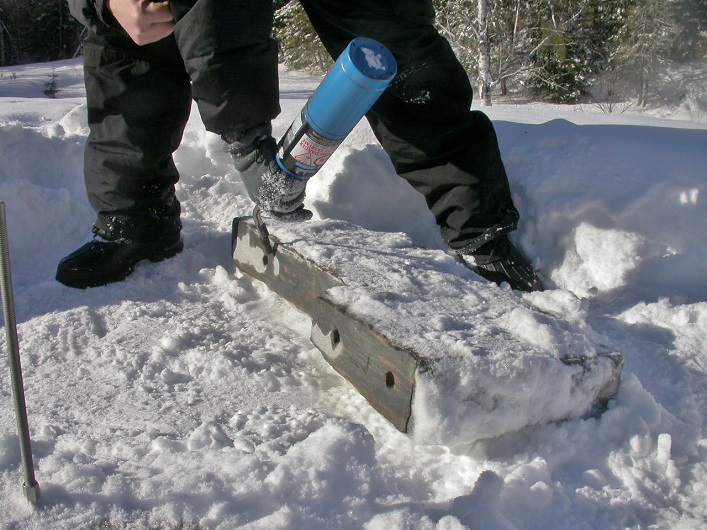 Rudi Stade flames the stone during assembly of the bench (supplied0 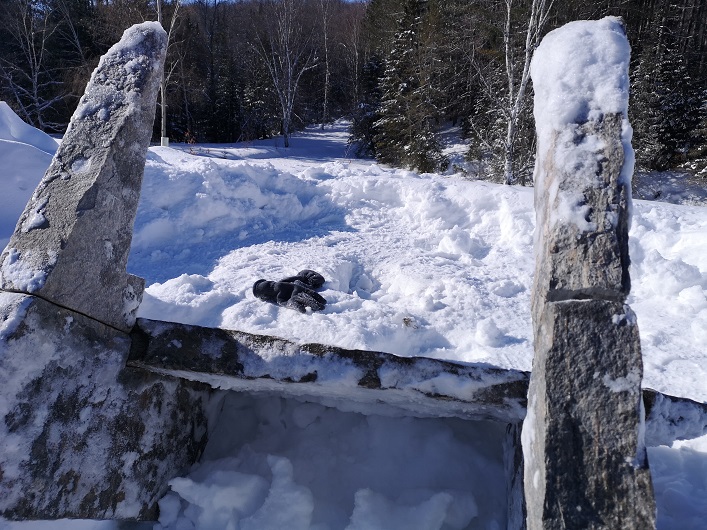 The bench had to be assembled in place (supplied) 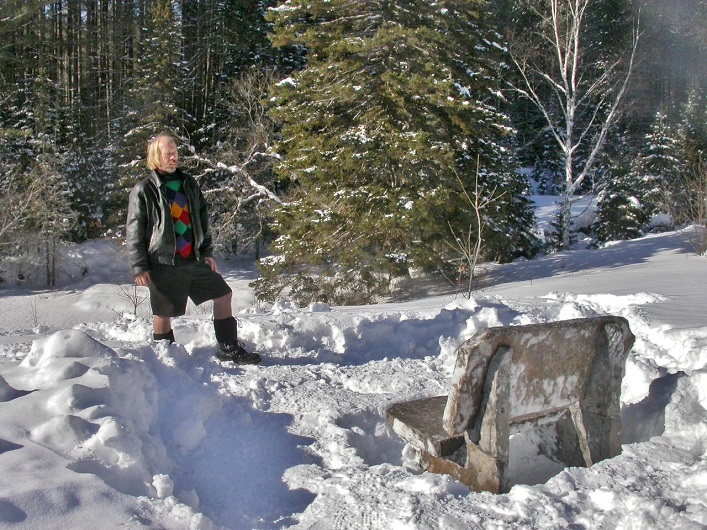 “Even for Rudi, who’s kind of famous for doing crazy things in his shorts in the middle of winter, I said ‘Have you ever done anything this crazy?’ and he said, ‘Well, I don’t know, this will be right up there,'” says David. “I’m 56 and he’s 61, and here we are taking all this granite up that distance and putting it all together. But I’m very happy with the results.”

Although it didn’t occur to him at first, the parallel between David’s act of love, and that of Clifton Dyer more than 60 years ago, struck a chord. After the death of his wife in 1956, Dyer commissioned a towering monument overlooking the Big East RIver in her honour. Both of their ashes are interred near the top of the tower.

“When (it was) complete, I reflected that one thing as powerful as Mother Nature is the strength of the human spirit,” says David. “I wanted to honour my wife with this bench, and I didn’t want to wait to do it.”

“It wasn’t lost on me at all that the Dyer Memorial itself is really a tribute of love from Clifton to his wife and that’s what this was for me and Jo,” David says. “Jo would be very happy to know that this is a place where people can sit and just reflect because it is such a wonderfully peaceful, tranquil area. I think if it serves to bring a little bit of peace into people’s lives because they can reflect, then that would be a very, very happy thing for both Jo and myself.”