You are here: Home / Feature / All the world’s a stage for Pamela Smyth

Pamela Smyth dismisses the idea of an interview at first, laughingly declaiming, “Oh, I’m really yesterday’s news.” She reluctantly agrees when she is reminded of the vibrant theatre community that exists in Huntsville today thanks to the foundation that was already there and to which she contributed along with many others. For Smyth, it began with the storied Rotary Club musicals that welcomed Pamela when she and Dr. Thomas Smyth arrived in Huntsville in the late 1970s.

The Smyths came to Canada after leaving Northern Ireland during “The Troubles” in 1972. Pamela was raised a Presbyterian and Thomas was an Anglican, which, as Pam recalls, “was the next worst thing to being a Catholic in my neighbourhood.” Pamela was working as a psychiatric nurse and they had a two-year-old named Tara who would be joined by sister Claire a few years later in Canada.

Directed by the Canadian government to an under-serviced area, the young family settled in Iroquois Falls, which Pamela loved. But the extreme cold bothered Tom’s ‘bad’ leg, which was a result of osteomyelitis in childhood. When they saw an advertisement by Dr. Dan Jones to join he and Dr. David Hillier in a clinic in Huntsville, Dr. Smyth applied and they moved south to Huntsville.

“I’ll be honest,” Pam recounts, “I was depressed at first and I missed Iroquois Falls terribly.” She explains, “Moving from Northern Ireland to Iroquois Falls I was introduced to an entirely new culture: I became interested in the archaeology of the area and therefore the First Nations who lived there. I admire the Indigenous peoples’ relationship to nature.” The knowledge of the natural world – the plants, animals, seasons and cycles of nature – has been a central tenet of their lives and worldviews since the dawn of time.

While Smyth is very sensitive to the issue of appropriating another culture, she believes that attending Pow-Wows and supporting First Nation, Inuit, and Métis art is a pathway to understanding and respecting their culture. The beautiful paintings and sculpture that adorns their more than century-old farmhouse speaks to the Smyths’ respect for the culture. 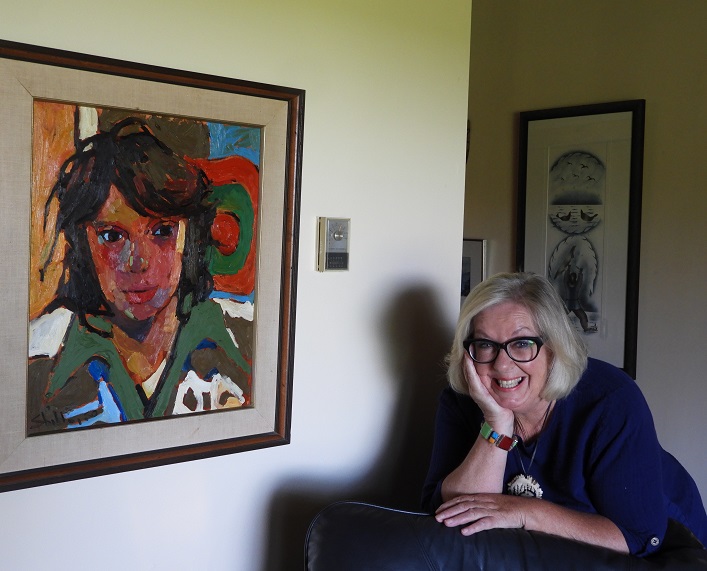 Pamela Smyth with one of the Indigenous paintings in her farmhouse 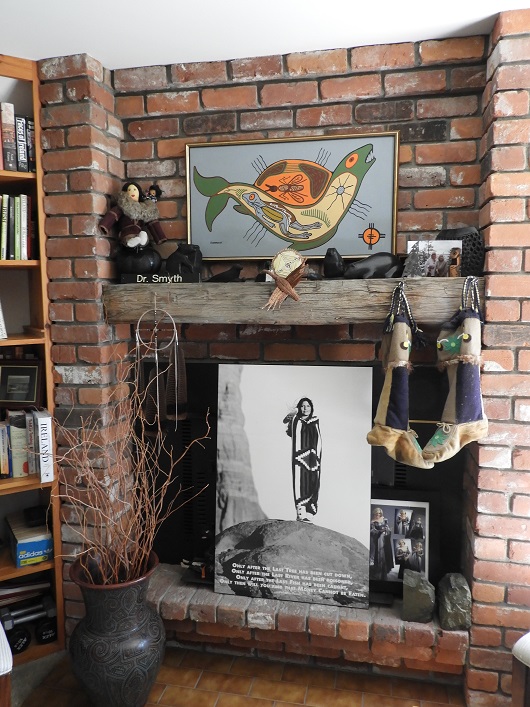 Pamela thinks back, “So, here I was in Huntsville and not too pleased about it when I decided that I’d better take steps to become a part of the community. Huntsville was much smaller back then and so was the medical community. Everybody knew everybody.” She laughs, “I didn’t drive so I rode a bicycle all over town, which wasn’t too common back then. People waved and I waved back and I began to settle in.”

She saw a notice in the Huntsville Forester where Dr. Lynn Sergeant invited people to audition for a Rotary Club musical of which he was the musical director.  Smyth was impressed that the notice said “No talent required. Just come out and prepare to have fun.” She had found her sense of community.

In 32 productions with the North Muskoka Players and three productions with Rotary,  Smyth usually played to her strength as a producer.  She says,“I love the production end of things. It is really where I learned the craft of theatre. Then you hone your craft by doing it.”

She adds, “I am a frustrated artist so there are certain aspects of putting on a play that I really love and set design is one of them.” But there is a downside to that, too.  Pamela and Thomas saw a renowned Irish play called Juno and the Paycock by Sean O’Casey. It is set in the working class tenements of Dublin in the early 1920s. Smyth says, “It was done to perfection…except…when the Captain undresses in one scene his undershirt is blindingly white when it should have been dingy.” She adds, “It jumped out at me like a red flag.” The couple stayed on for a question and answer period and Pamela questioned the director. About a week later, Smyth’s dear friend Stina Nyquist (Best Director at the Ontario Amateur Theatre  Awards) was in Stratford.  An acquaintance happened to recount seeing the same play and when she said, “There was this Irish woman that stood up and asked why….?” Stina laughed and said, “I know exactly who that Irish woman was!”

In my opinion, there is nothing quite like live theatre to bring out the immediate, authentic reaction in an audience.

The Smyths have attended numerous Stratford and other professional productions both at home and abroad. After one visit to New York’s Metropolitan Opera they became great fans in part because the acting in modern opera is both superb and more realistic than it used to be. Closer to home, they attend Live From the Met at the Cineplex in Orillia.   Pam chuckles, “And we get to do it with popcorn and a Slushy.” The initial inspiration for big productions in movie theatres was a global theatrical event featuring David Bowie, who launched his 2003 album “Reality” with a live performance transmitted to movie theatres via satellite.

As to the current theatre scene in Huntsville, Pam offers, “Most recently, we went to see When Winnie Knew at the Algonquin Theatre. It was excellent! I was reminded of how lucky we are to have a talented, professional actor like Grant Nickalls in Huntsville.” She also had high praise for Cydney Jones’ portrayal of Winnie Trainor: “Cydney was wonderful and she obviously did her research. She WAS Winnie!”

Smyth encourages anyone with some interest in theatre to develop it. She advises, “As an amateur, take your inspiration  from the very best. Go to the theatre, read, study and watch what works for you and then use it!” She smiles, “It’s easy to think of theatre as hoity-toity but honestly, it is more like a factory. There is a job to be done and a person and a place and a way to do it. It is incredibly detail oriented and that can help you in other facets of life.”

Smyth concludes, “Community Theatre brings together people from all backgrounds that you would never otherwise meet to work together, to create together and to have a heck of a great cast party when the final performance is done.”