Forty of Ontario’s best female hockey players have been selected to play for Team Ontario at Hockey Canada’s prestigious Women’s Under 18 National Championship taking place from November 4 to 8 in Huntsville.

The Championship is an eight-team competition featuring many of Canada’s prominent young players. Team Ontario Red will compete in Pool A with Team Manitoba, Team Quebec and Team Saskatchewan. Team Ontario Blue will compete in Pool B with Team Alberta, Team Atlantic and Team British Columbia. The schedule and information on the championship are available at www.hockeycanada.ca.

“We are expecting to have a ton of scouts in the stands,” said Wendy McConnell, chair of the Host Organizing Committee for the tournament. These scouts come from colleges and universities across Canada and the US, and could offer scholarships to the top players.

In addition to playing the games themselves, the girls will also be making a number of community visits such as stopping by local schools to talk to the kids about the female hockey program.

“We are also hoping to get some of the girls into local seniors homes to provide a little fun and let some of the seniors know whats going on,” said McConnell. “That always turns out to be a unique endeavour. It’s amazing how the older people really relate to these kids.”

The Ontario Women’s Hockey Association teams each consist of twenty players plus team staff. Eighty participants were selected to attend the July High Performance Selection camp. These players were selected through an extensive scouting/evaluation performed by the OWHA Head Scout and his team of evaluators within OWHA/Hockey Canada sanctioned events. There are several thousand players in the eligible age group who participate on competitive teams within the OWHA. In addition to showcasing exceptional players, the event will also feature high performance female game officials from across the country.

It’s a real coup for us to get a Hockey Canada event in the building, they are just blown away by the facility we have.Wendy McConnell, chair of the U18 National Championship Host Organizing Committee

“We have been bidding for the past three years to try and get the tournament in Huntsville,” said McConnell. “It’s a real coup for us to get a Hockey Canada event in the building, they are just blown away by the facility we have. They have been for a couple site visits and cannot believe what a great venue it is, the size of the dressing rooms, the layout of the arena, fitness facilities. I really believe if Huntsville wanted to bid on other Hockey Canada events in the future they would be successful given how impressed they are with everything.”

Many players who have competed on the OWHA’s U-18 teams have gone on to play for Team Canada at the U-18, U-22/Development and National Team levels. Players from all teams participating in the National U18 Championship in Huntsville are striving for a spot on Hockey Canada’s National U18 Team that will compete in the 2016 IIHF Ice Hockey U18 Women’s World Championship to be held in St. Catharines, Ontario this January. 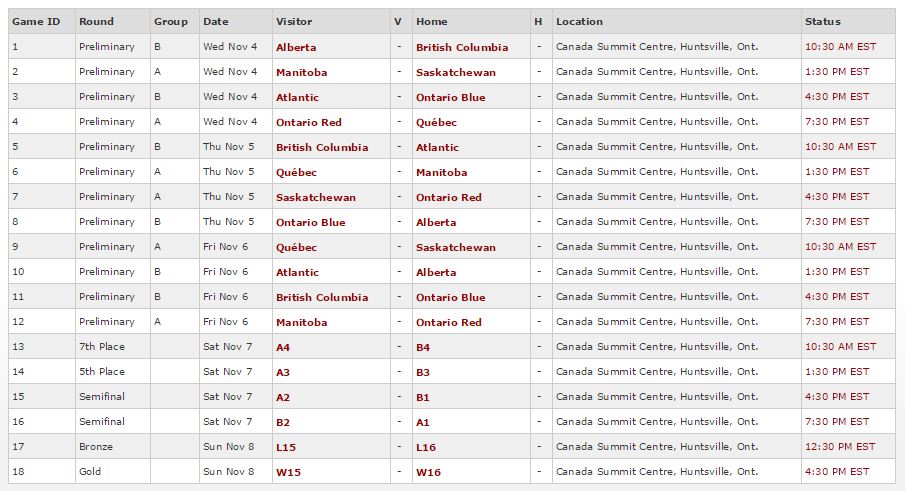