You are here: Home / Community / The forest is friendly and full of good eats

If you were ever lost in the bush, Laura Gilmour would be the perfect person to have with you.

She’s only in her 30’s but through her experiences she has acquired a vast knowledge when it comes to living off the land. Gilmour is a botanist, a herbalist, a naturalist, and is certified in permaculture design and wildlife tracking. She’s worked as an environmental consultant and has done large-scale ecological mapping as well as wildlife research. She could probably tell you something about any native plant species and she can cook a feast using Muskoka’s wild bounty. She can start a fire without flame and the other night she slept outside. Just because she wanted to.

She admits she’s a bit of a hippie-at-heart.

A year ago she started Wild Muskoka Botanicals and has been in the midst of creating and learning ever since.

She sells wild foods and makes herbal medicines using traditional recipes but, of course, adding her own creative element with her own unique blend of herbs and spices. She’s always experimenting in the kitchen. She will tell you that even when she’s not working, she’s still working.

“Make someone a cocktail out of wild plants and they’re hooked. There’s a connection. They’re not going to forget that.”

What she does is truly a labour of love. She enjoys being outside foraging wild edible plants and then turning what she’s plucked from Mother Earth’s ground into something that is natural and delicious.

She and her husband, Chris, offer nature education programs from their home, which is situated between Dwight and Dorset. He shares an affifinty for the great outdoors and they spend a lot of time doing things they love together.

“I was thinking about how I could live off the earth in a way that had a smaller footprint.”

To Gilmour, her property is perfectly suited for their outdoor needs. It abuts onto thousands of acres of Crown land and is surrounded by wetlands and loads of wildlife. She has gardens, beehives and chickens.

A little secret of hers? That Muskoka’s forests are full of trees that have medicinal properties and plants that are incredibly delicious. Take, for example, coniferous trees like pine, spruce and fir. All three are common in the area and have high Vitamin C content. White pine, a personal favourite of hers, has medicinal value that can aid lung problems and was once even used to treat scurry. Have you ever had a pickled milkweed pod? She’s an expert in wild mushrooms, too.

She makes an all-natural soothing throat spray, spruce tip sugar, wild leek vinegar and her own honey. And she can’t make enough of her Elderberry Syrup. Consisting of elderberries, honey, and her own mix of spices, it’s an immune system booster and has the potential to fight off cold and flu viruses.

“People will literally come up to me and say, ‘Oh my god, your syrup saved me. The thing is elderberries have been around for thousands of years and they grow native here in wetlands. I think they’re under-utilized. A lot of people don’t know they grow in their backyard.”

Her love for all things wild likely stems from a childhood spent immersed in nature. As a little girl she said she was always enjoyed being outside and was infatuated by nature.

“It feels natural. It feels like where I’m supposed to be.”

After high school, she moved to Toronto to study engineering. But 12 months on Jane and Finch and the country girl was longing to come back to her roots.

“I was like a fish in water and I didn’t know what the water was until I was taken out of it,” she explains. “I didn’t recognized the importance of what I had until I moved to an urban environment. It was a good wake up call.”

She enrolled in Sir Sanford Fleming’s environmental studies program and it didn’t take her too long before she realized that wasn’t her calling either.

“What I was learning wasn’t exactly what I wanted to learn,” says Gilmour. “I was thinking about how I could live off the earth in a way that had a smaller footprint.”

Instead of spending thousands of dollars going to college or university to learn about sustainable agriculture, she volunteered for people involved in permaculture and ecological design methodology, which puts care for the planet at its core – something that deeply appealed to her. She lived in California for a few months where she received certification in permaculture design.

Through her experiences, she met all kinds of knowledgeable people – herbalists and agriculturalists and people who opened her eyes to a new way of living. She learned about farming, animals, wild edible plants and plants used for medicine. To earn an income she did odd jobs like tree planting and sold her handmade jewellery. 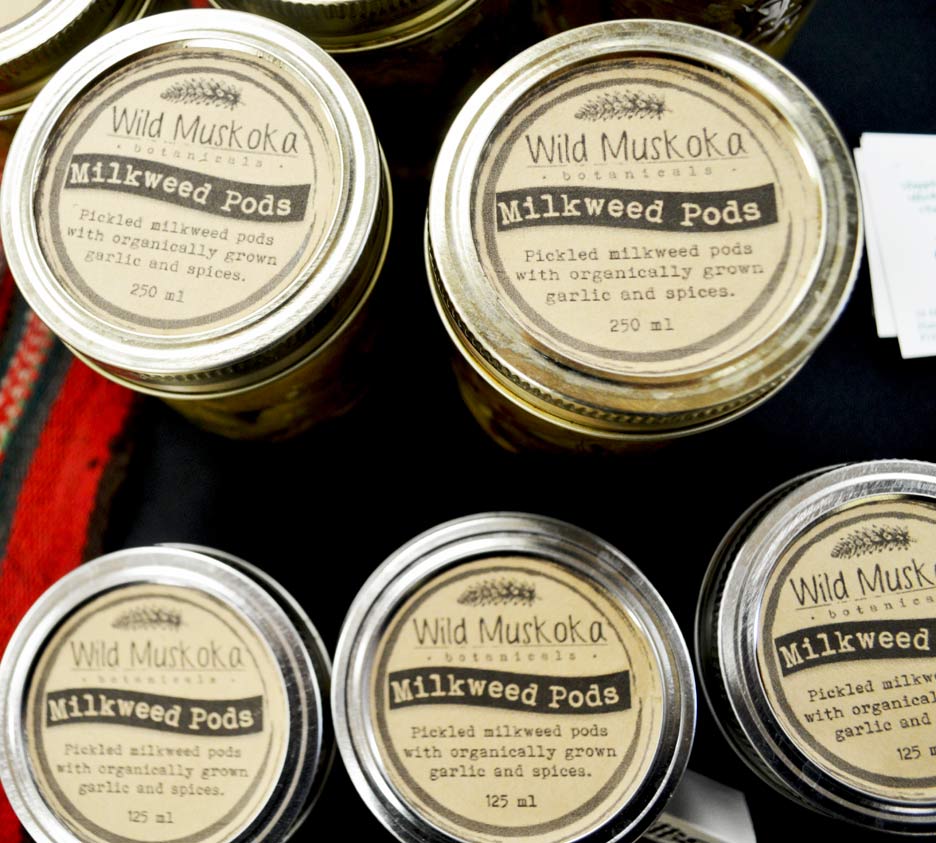 Who would have thought to pickle a milkweed?

“I love the plants so much,” she says, with a certain innocence. “I’m so passionate that plants are the basis for the soil and the air we breathe. A passion of mine, really, is to recognize the value of what’s around us.”

It might have taken her a few tries, but now it’s safe to say that Gilmour is on the path she was always destined for. Her business is starting to take off and she received funding from FedNor to have a booth in the upcoming Royal Winter Fair in Toronto. She’s taking it one step at a time but says things are taking off a little quicker than she anticipated.

“I’m terrified and excited. Everyone in my life is so supportive. I have no children, no major debt. It’s now or never.”