You are here: Home / Community / The art of imitating life: meet Ken Morrison

Ken Morrison can bring a bird back to life.

He can’t revive a dead bird or anything like that, but his craftsmanship as a taxidermist makes a bird that would otherwise be a carcass of bones and feathers a real spectacle. Ken is also an amazing woodcarver. His attention to detail combined with a whole lot of patience and determination makes him a master at what he does.

When I got the chance to go to his house the other day to see his work, I was truly astounded. He has the kind of house that immediately makes you feel welcome and cozy. Beautiful art hangs from the walls. I knew his wife, Betty, was an avid gardener but I didn’t know she was an aspiring artist. What really caught my eye was that in almost every corner of the house was something Ken has made by hand. Whether it was an amazingly realistic mounted bird or a hand-carved masterpiece like the Tufted Puffin he spent 200 hours carving for his son, it was hard to tell the difference between what has been hand-carved and what has been mounted. (Well, for me it was, anyway). Hundreds of birds – owls, turkeys, falcons, a few blue-jays, even a squirrel and a bear and a pronghorn – are displayed around his home. He’s made several of the glass cases that house them, too. I was able to draw a conclusion fairly quickly. Ken has got some serious skill.

A man in his early 70s, Ken still does a lot of interesting things and they all boil down to him having a deep appreciation for nature and wildlife. Every year, he and Betty travel to Point Pelee to take part in the annual spring migration. He’s also president of the Huntsville Nature Club, a photographer, a gardener and has a love for studying butterflies and dragonflies.

Even as a young boy, he found himself infatuated by birds.

“I would collect feathers and save them,” he says. “I’d find dead birds and saved parts and eventually when I was 14, I read an article in a Popular Science magazine on taxidermy and mounted my first bird. It turned out terribly. That was 58 years ago. I’ve been doing it ever since.”

It was the beginning of a life-long passion. Although he always enjoyed it as a hobby, Ken got serious about taxidermy and started a business when he retired from working as a Regional Wildlife Specialist for the Ministry of Natural Resources in 1997.

His knack for woodcarving is something to rave about. He’s been doing that for the last 36 years. He runs a business for taxidermy and his woodwork out of his Huntsville home. During the winter months, Ken spends countless hours tucked away in his workshop. Wood carving is a time-consuming thing to do. It takes a lot patience, but fortunately, for Ken, he tells me he has a lot.

I just love the feeling of taking an inanimate object and making it as life-like as I can. God is the only one who makes it life-like. I’m a weak copier of his ability. I’m creating something people enjoy.

Ken is an avid bird watcher, and birds make for the perfect subject. It’s quite obvious he’s paid attention to every detail of our feathered friends as his woodcarvings offer an uncanny similarity to a real-life bird. 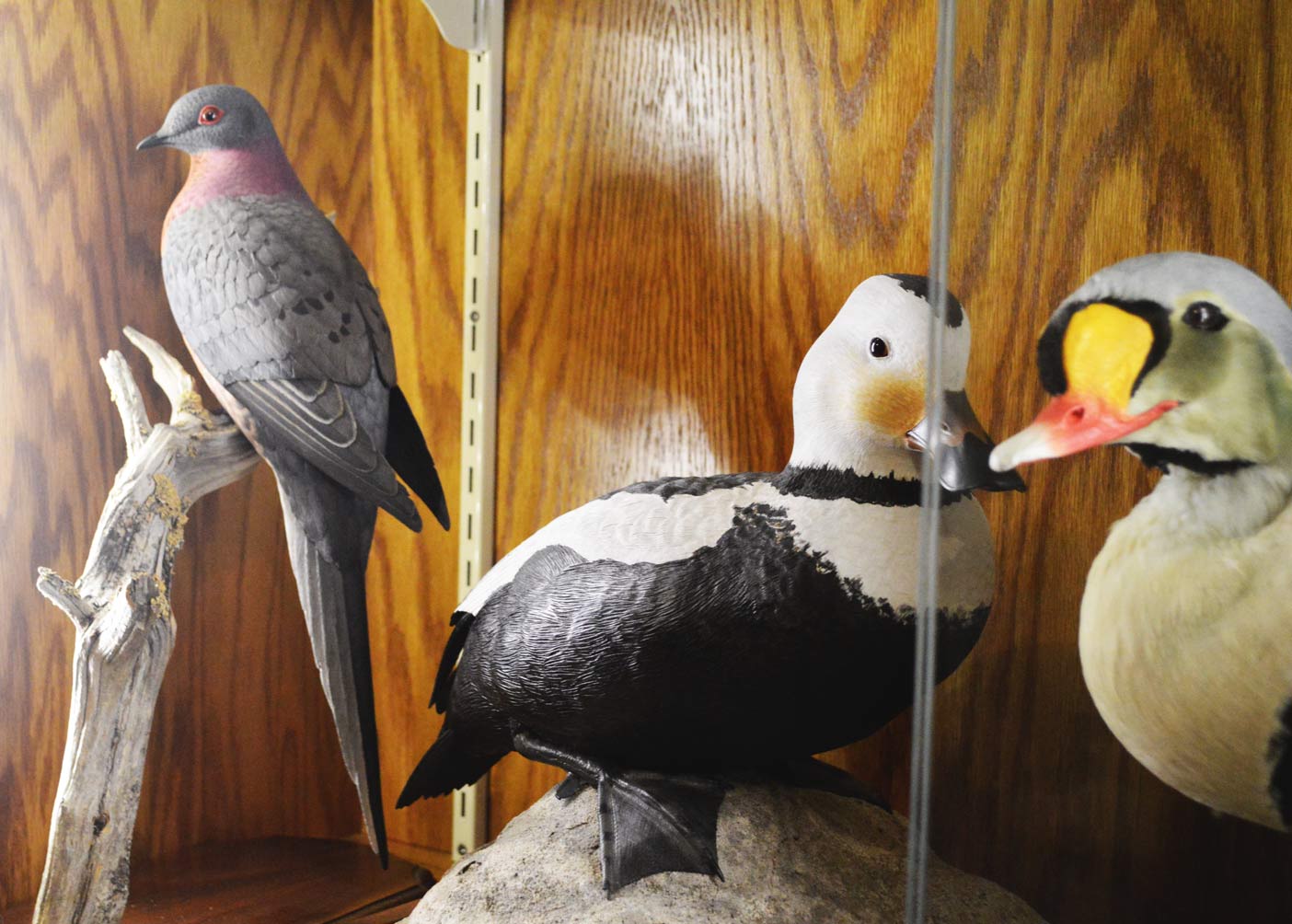 Some real works of art in Ken’s home: His carving of a male passenger pigeon (left) – a species that died out on Sept 2, 1914, reduced from an original population of billions – and the ever-popular puffin.

“To me, they are a striking animal. They come in a variety of shapes, sizes and colours, and that’s what I find so great about them.”

While his skill as a woodcarver has earned him all sorts of awards and recognition, being an expert at taxidermy hasn’t gone unnoticed either. Over last 10 years he has worked on several different contracts for the Royal Ontario Museum (ROM) and has restored and mounted more than 100 birds for ROM, some of which are extinct, including the Carolina Parakeet. Last year, he resurrected and repaired 12 passenger pigeons for a display that honoured the bird’s extinction 100 years ago as well as the ROM’s 100th anniversary.

“The ROM has one of the biggest collections of passenger pigeons in the world,” says Ken. “It was quite a big display of habitat and passenger pigeons that had been damaged over the years. That was a real privilege.”

In 2014, Ken mounted Huntsville’s significant Trumpeter Swan that died of lead poisoning from ingesting a fishing sinker. It is mounted beautifully downstairs in his home, and it makes me realize that there’s a certain level of importance in what he does. He’s preserving nature. In many ways, he’s keeping a copy, its legacy if you will, and bringing it back to life.