You are here: Home / Community / Tales of a time gone by: David Johns brings old Huntsville back to life

It might have something to do with being born in 1945.

The books, which feature some great history and stories, not to mention photographs, bring a time gone by back into focus when it comes to Huntsville’s first roads as well as the booming automotive industry.

“I loved Huntsville in the 50s and 60s. I was a youngster back then. I remember walking to Huntsville Public School and the blacksmiths would be shoeing horses and the roads were still being plowed by horses and buggies. Everybody walked. No one drove because they couldn’t afford to. You knew the store owners, so you couldn’t get away with anything. It was a great Huntsville. It was such a different time.”

It was the beginning of an era that introduced a lot of change to our town. The war was over. Pathways were becoming paved roadways and technology was enhancing the automotive industry. There were more radios in households than televisions. If you had to get somewhere, chances were you walked. Back then, says David, there was a whole different vibe going on in town. People were a lot friendlier. Store owners went out of their way to say hello to passersby. Kids walked to school by themselves. Everybody knew one another on a first-name basis.

David was born and raised in Huntsville and had a unique upbringing in the sense that much of his childhood was spent around cars. His father worked at a local garage and from a young age he was surrounded by mechanics. Back then, dashboards were a real work of art. There was a lot to look at and a lot of play with. Old cars broke down all over the place, says David, and the wrecker boys had to know where to go. David would jump at the opportunity to go with them.

Every Sunday, if the weather was fair, David and his two older brothers and their dad went for a drive.

“I loved it in the backseat,” he recalls. I can tell he truly enjoyed his childhood by the excitement in his voice when he tells me his stories. “And that’s how I got to know Muskoka and Lake of Bays. The roads were terrible. Cars took a beating. I’d say we’re pretty lucky today.”

He can tell you all about Huntsville’s first car dealerships and how many garages were operating and who owned them. He knows about the area’s first roads and watched the ongoing process of expansions and improvements. In his first book, he pays tribute to local automotive pioneers like Seth Grimes and Percy Mulveney.

David even got to witness the last steam train departing from the train station.

“A huge change was in 1959, when the bypass opened. You didn’t have everyone coming through town anymore. As soon as it started, garages and gas stations were gone… I’m talking 15 or 16 gas stations gone.” 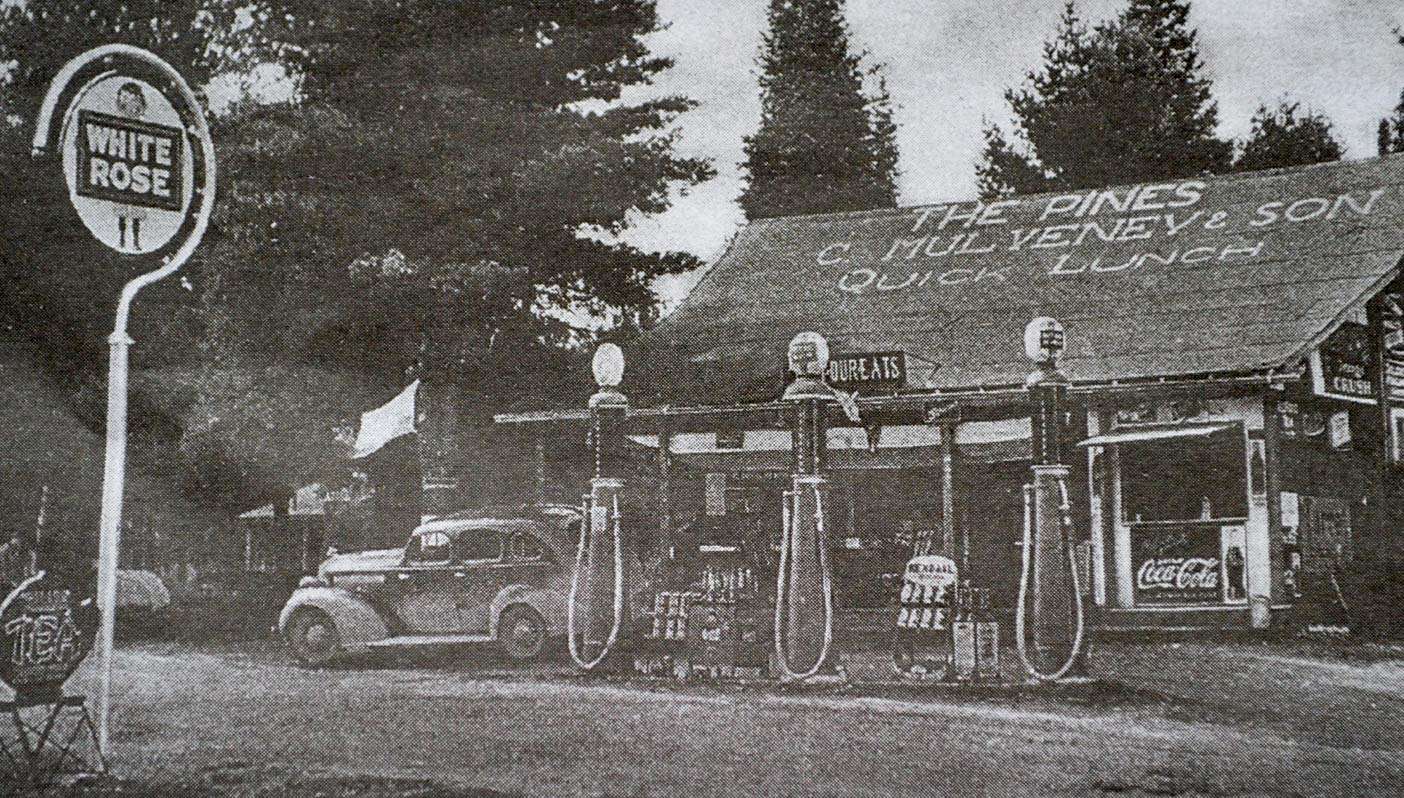 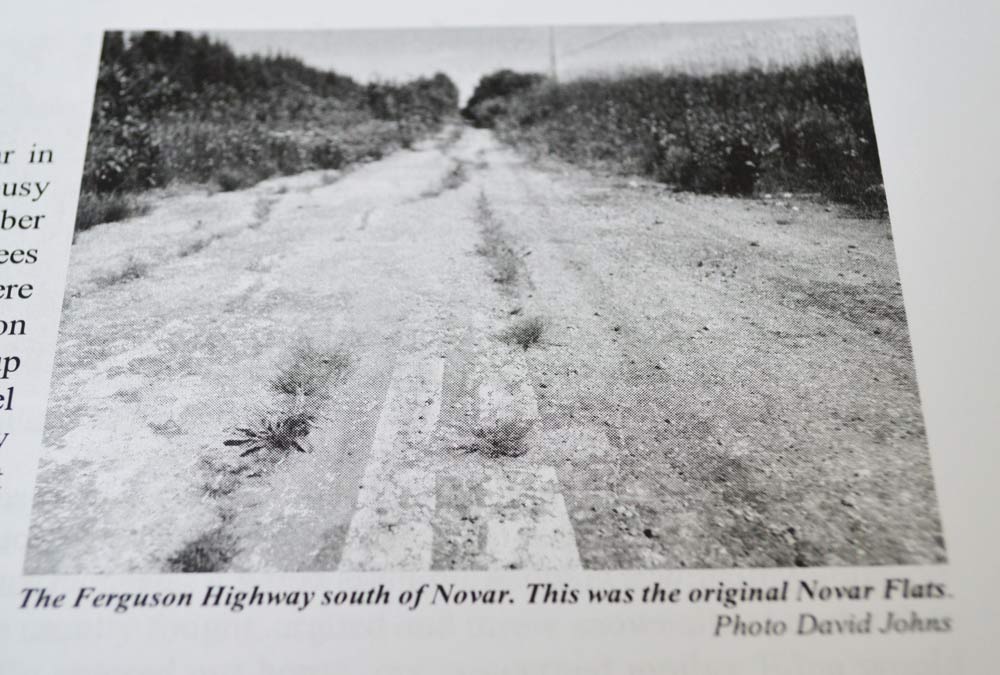 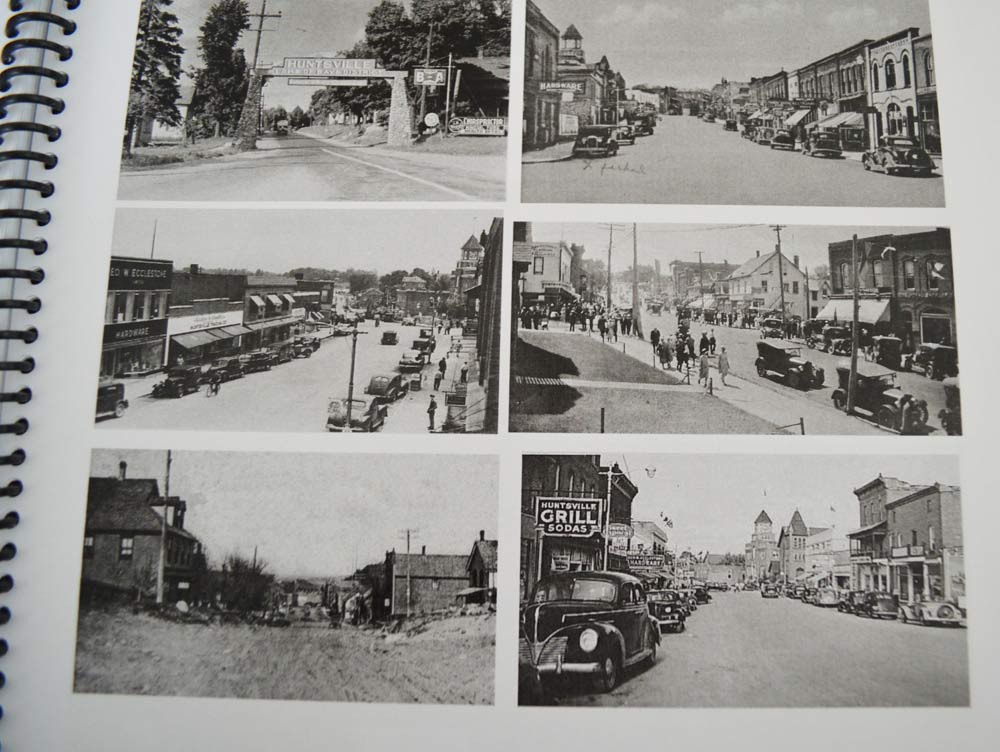 (Above, clockwise from upper left) The cover image for Pathways to Highways of Mulveney’s in the Pines gas station, which operated decades ago in Utterson.
Some images of Huntsville back in the day. David wanted his books to be a visual experience as well.
The Ferguson Highway south of Novar, originally known as Novar Flats.

When he retired from Kimberly-Clark 12 years ago, David had a little extra time on his hands, not to mention some serious drive and determination. Having always been inspired by the history of roads and the automotive industry, he got out his binders. Over the years, he had taken some notes on dates and facts about various local garages and the names of individuals and stories that pertained to them. Because his dad never really opened up about his job (back then, most guys left work at work and didn’t really talk about it) David went on a hunt. He needed to find the right people to help him put the pieces together. He spent countless hours doing interviews and collecting stories. He devoted a great deal of time to going through microfiche records of the Huntsville Forester at the Huntsville Public Library. Muskoka Heritage Place was another reliable source for valuable information. To David, what he was doing was a hobby. It was a labour of love. And before he knew it, he had written his first book.

The research was huge. I don’t know how many years I spent on it… thousands of hours. It’s mostly about ordinary people who worked at garages. There are a lot of pictures in it too, so it’s a visual experience as well. I think why people like it is that they relate to it. I had people asking me, ‘When are you going to write the next one?’ I knew right away that people enjoyed it.David Johns, author of Pathways to HIghways 1 and 2

It wasn’t too long after that David wrote Pathways to Highways Volume 2. The book focuses more on local automotive history beginning around the 1960s and up. There are real stories about local people and a section on muscle cars to make it “more interesting for the younger people.” How many of you know that in 1958 MacDonald’s Restaurant on Main Street started selling soft serve ice cream?  Remember the King Ferdie at Tasty Creem? Really, it was when Swanky Frankies were introduced that business really started to take off. 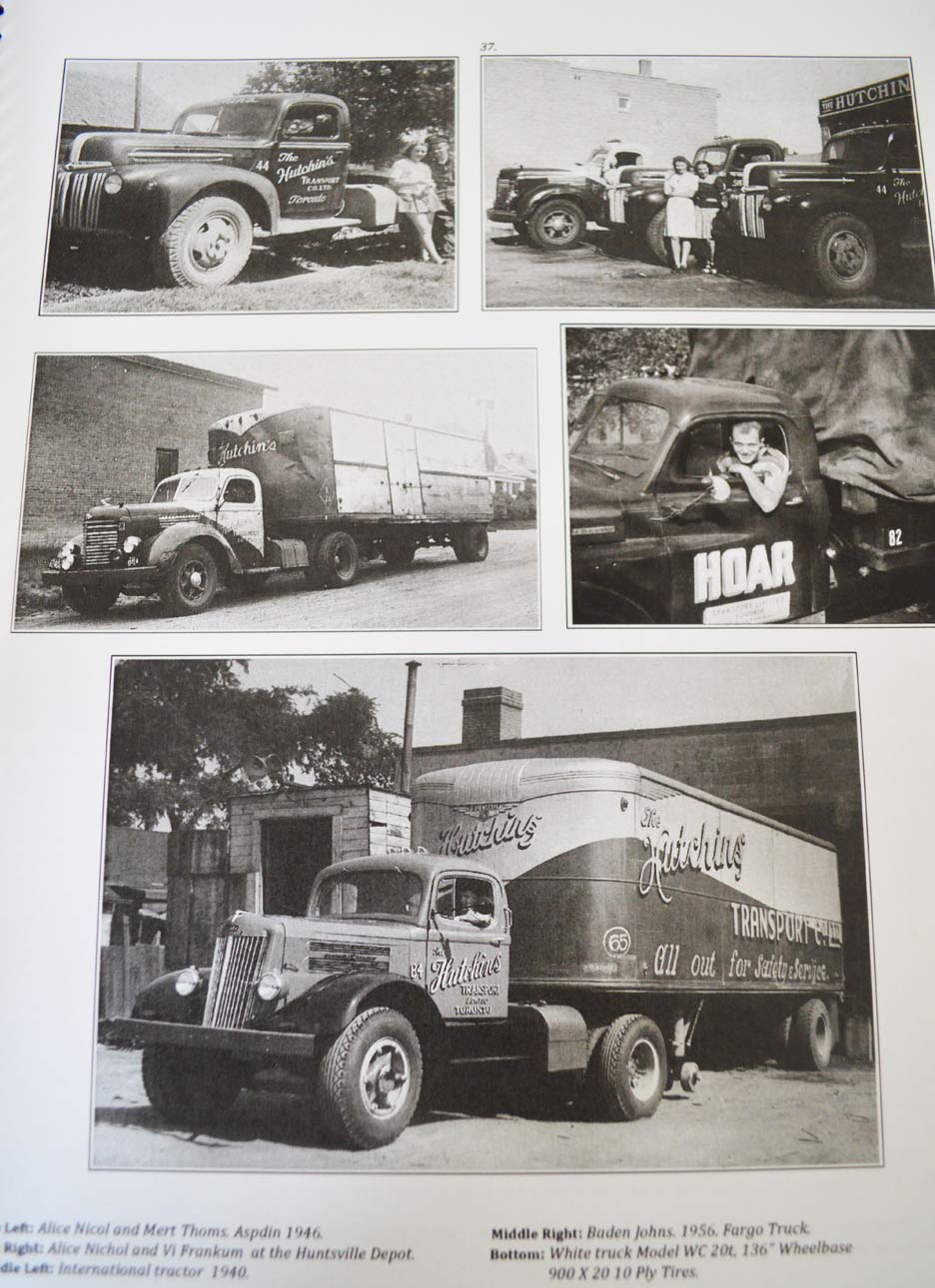 Some interesting photos of older-style delivery trucks, which certainly paint a vivid picture to how times have changed. 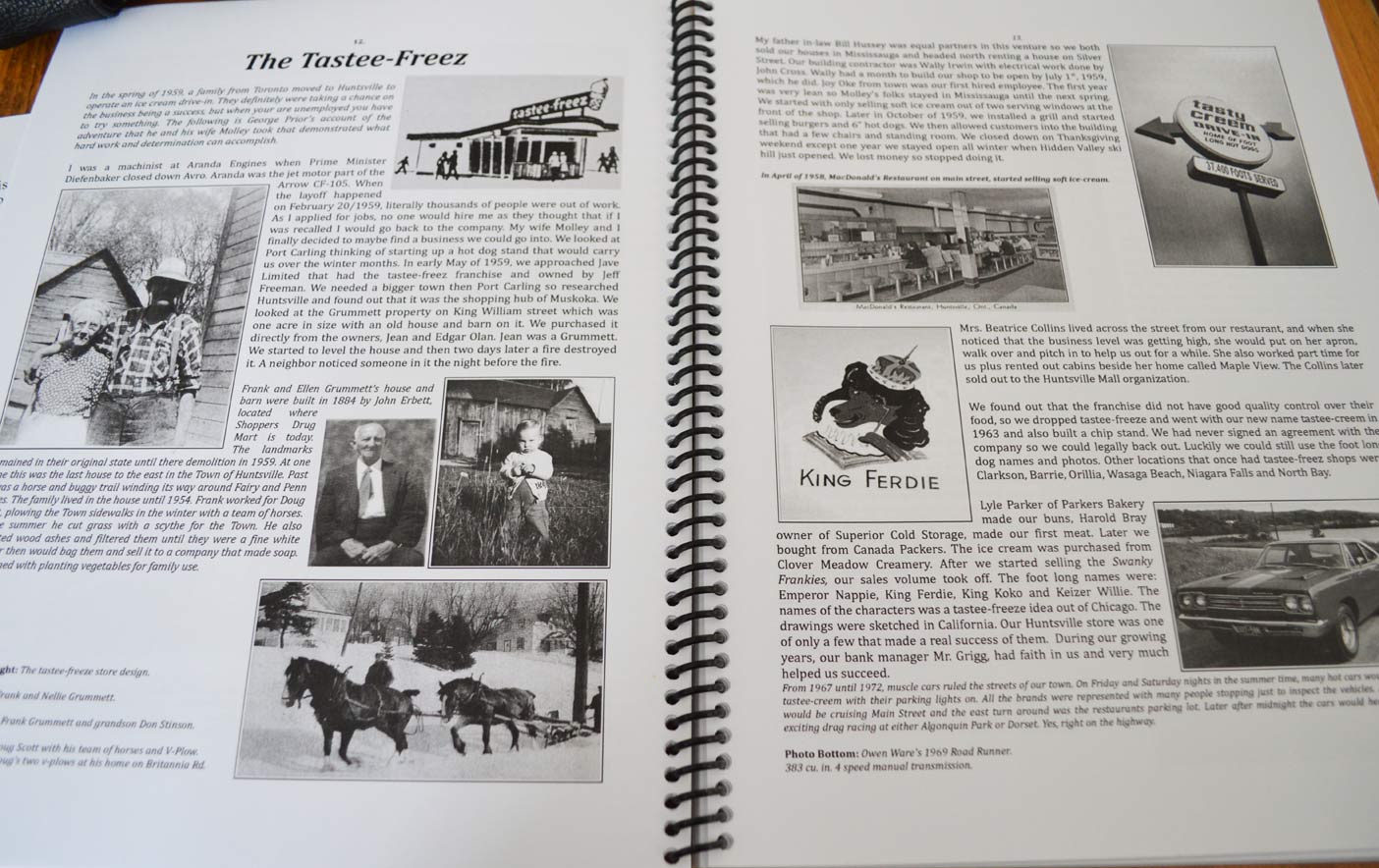 Who knew that Tasty-Creem was originally called Tastee-Freez? It was home of the foot-long hot dogs, including The Emperor Nappie and King Ferdie.

David’s certainly made a valuable contribution ensuring Huntsville’s historic past is embraced. He loved every minute talking with various local folks over coffee, gathering stories of yesteryear. He didn’t know how many books he was going to sell. And to be honest, he didn’t care. But sales have exceeded his expectations.  He was simply inspired to share everything he knew about our little town and the people who contributed to its success. Indeed times have changed. But to this day, he will attest, it’s still a pretty remarkable place to live.