You are here: Home / News / Students walk out for Global Climate Strike rally

With the youth demand for climate change action growing the world over, students from Huntsville High School came together today to stand up for what they believe in as part of a Global Climate Strike.

“I first heard about Greta Thunberg, the teen climate change activist that started the Fridays for Future movement, this summer,” said local teen activist and walkout organizer Annika Martin. “I was immediately intrigued and shocked I had never heard of her. I started following her on Instagram and discovered that this was a bigger deal than I thought! I highly look up to Greta for being the voice of Mother Earth. She’s only 16, which makes her accomplishments all the more incredible. Around a week before school started, I noticed that there was a global student strike on September 20th, and I knew that HHS needed to get involved.”

Martin then discussed the idea with friends at her school and classmate Sophia Andrew-Joiner agreed to take the project on with with her. From there they worked together to organize, plan, and advertise the walkout. One of the main ways they informed people of the walkout was through an Instagram page @change.HHS where Martin has been posting environmental updates, reminders, and sign ideas frequently.

Teen activist Thunberg recently stated in a speech addressed to US senators: “Some of you may have heard that we have 12 years as from 1 January 2018 to cut our emissions of carbon dioxide in half. But I guess that hardly any of you have heard that there is a 50 per cent chance of staying below a 1.5 degree Celsius of global temperature rise above pre-industrial levels. Fifty per cent chance. And these current, best available scientific calculations do not include non linear tipping points as well as most unforeseen feedback loops like the extremely powerful methane gas escaping from rapidly thawing arctic permafrost. Or already locked in warming hidden by toxic air pollution. Or the aspect of equity; climate justice.”

While the student walkout was just the beginning of the week of protests globally, it is predicted that this could be one of the largest climate strikes in history, said Andrew-Joiner.

The HHS group was just one of many around the world who walked out of their schools today. Although only a small group of 14 students, they were met at Town Hall by over 50 adults from the community who wanted to show their support. 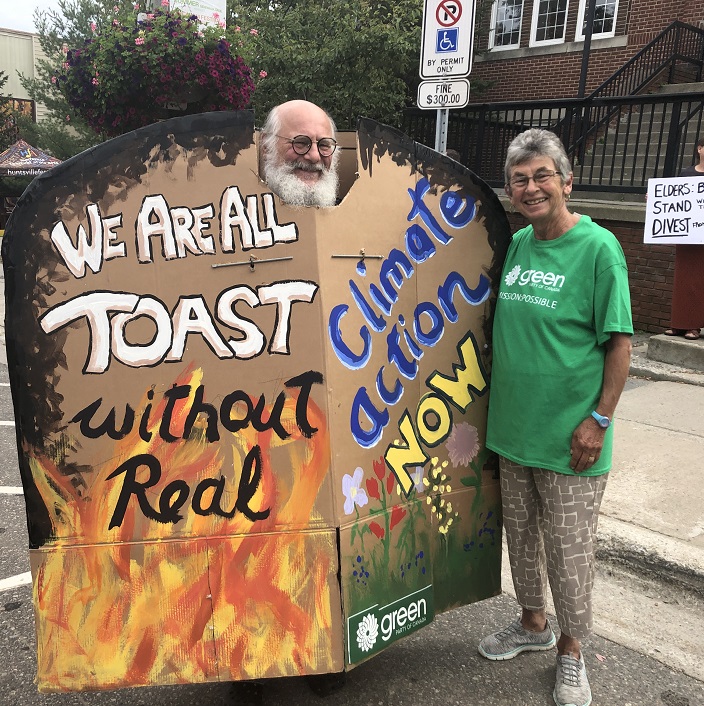 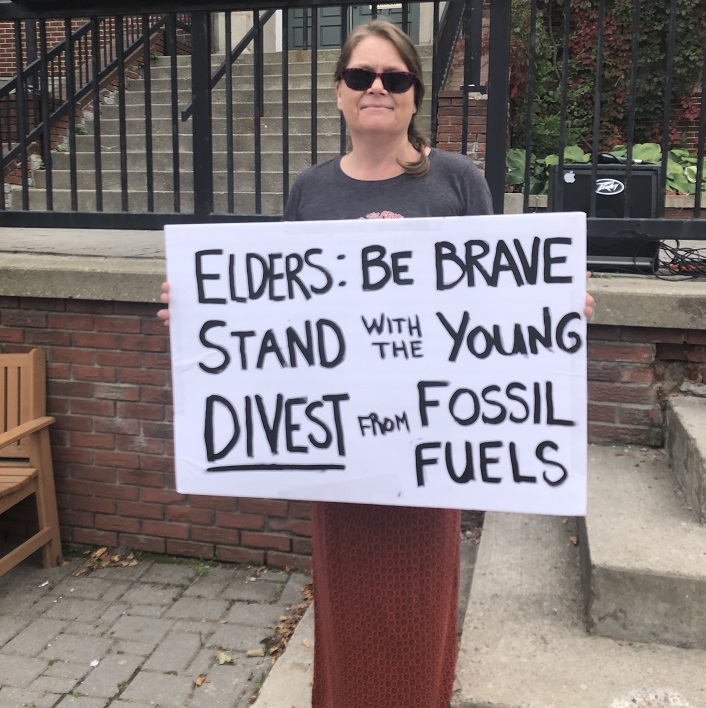 While awaiting the students at Town Hall, climate change activist Tom Cowan addressed the crowd. “Today we are here to lift our youth up and show support for Huntsville High School,” he said.

The students also expressed that many of the teachers at HHS were supportive of the cause and encouraged them to continue raising awareness about climate change.

“With strength in numbers we can make our message known to the governments internationally: We cannot keep living like this. As a society, we need to consciously make more eco-friendly decisions. Once we reach a certain point, there is no going back,” said Martin.

Martin and Andrew-Joiner want to encourage adults to join in the fight against climate change with young people.

“Students around the world are forming a sense of community. In the past, countries have had a lot of divisiveness between them as different people have different opinions. In the case, though, we’re all working together towards the same goal: to end climate change. I’m passionate about protecting our earth because it’s everyone’s home; there isn’t another one to fall back on if we screw this one up,” said Martin.

To and from their walk to Town Hall, the HHS students picked up garbage to show that “anyone can take little opportunities to make a difference,” added Martin.

If you missed the walkout but want to get involved there will be another rally held on Friday, September 27 from 11:30 a.m. to 1 p.m. at Town Hall, hosted by Muskoka Power of Many (MPOM), and will feature multiple speakers.