Barb Hartwick once made a dress out of a cargo parachute that showered an audience with real rose petals. She made one that blows up into a blueberry, too. She also created a caterpillar puppet that transforms from a cocoon into a butterfly to stimulate the minds of people who are recovering from brain injuries.

That’s the kind of stuff that feeds her soul. Being able to express herself through her creativity gives her the same satisfaction as it would for any kind of artist. It always has.

“It just comes natural to me,” says Barb. “It’s something I really enjoy. It’s funny because my siblings are engineers and scientists and it’s kind of like I’m the odd man out. But my dad’s an architect and my mom paints so I guess that’s where I get it from.”

She will tell you her job as a seamstress/costume designer and a rehab therapist for Brainworks is “a circle that works.” When she’s not designing a far-out costume for a hit stage production, she’s helping people who have acquired a brain injury rediscover their creative side. She’s found a satisfying balance between the two, and as hectic as life can sometimes be, she wouldn’t be able give up what she’s doing for anything. Her ability to “go crazy with her creativity” helps offset the emotional costs that can sometimes come with helping those who are suffering from the trauma of a brain injury.

She’s imaginative and has an eye for colour, detail, texture and patterns and that’s definitely reflective in the costumes she’s designed for plays and stage productions locally and abroad. Eleven years ago, Barb had a taste of the big league when she did her first show for Lucent Dossier in Los Angeles. Describing it as a cirque-style, avant-garde show, her unique style was a perfect fit for the LA vibe. She’s been on 42nd and Broadway in New York. Her work has been featured in the Coachella Valley Music and Arts Festival. In fact, the dress she made that showered an audience with rose petals was actually for a GRAMMYs after party back in 2010. She also did a season of costume designing with Guild’s Festival Theatre Company in Toronto a few years ago, but most of her work is done right here in her hometown.

The closer I get to the big entertainment industry, the farther away from Huntsville I feel. When you get down to the nitty-gritty, we’re all dedicated to our craft. We’re all the same. We’re all artists. We like to create and share what we’ve done and hope that people like it. It’s when you start losing your own voice and perspective when it comes to your art that the vibe starts to gets weird.

She’s been the lead costume designer for the last three musicals at the Algonquin Theatre, including Ten!, The Drowsy Chaperone and the theatre’s current stage production of Roald Dahl’s Willy Wonka (which runs until April 9). Her one-of-a-kind creations never go unnoticed. She’s built up a name and reputation for herself, and not just around town. A lot of heart goes into her work. It’s not hard to tell. She’s an artist and her passion is evident. Barb definitely has something special her going on. 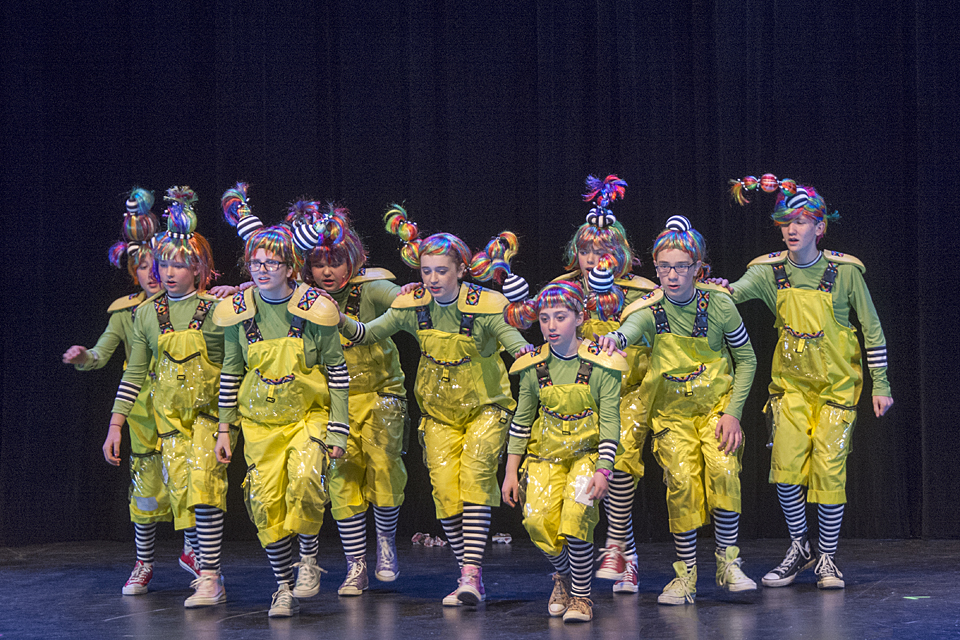 Meet the Oompa Loompas! Barb designed all the costumes for Willy Wonka and you can truly see what a gift she has. 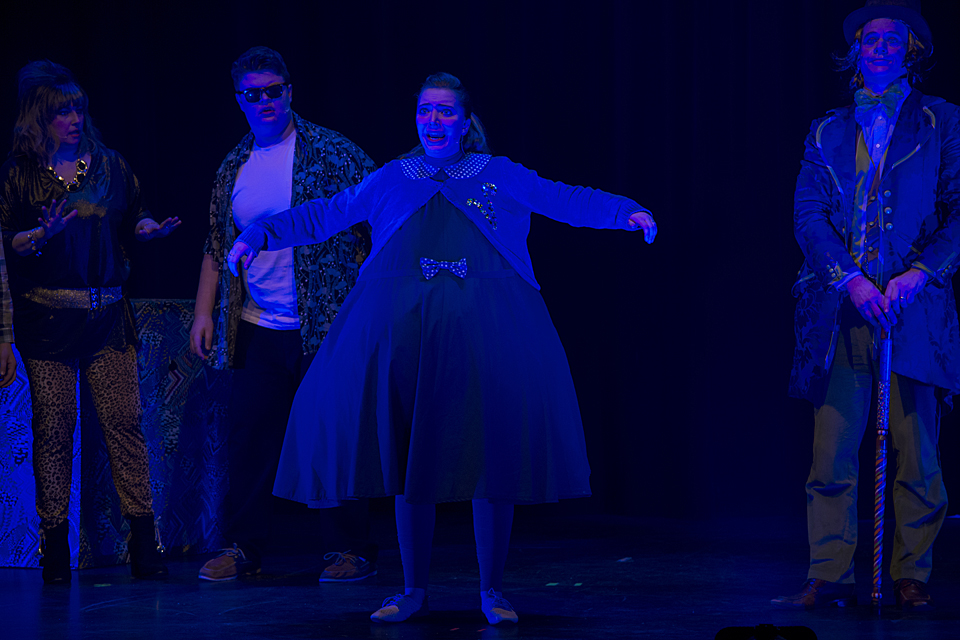 Her creativity was in full swing when she was thinking about how to make a dress become a blueberry. (Hint: special material, three battery-operated fans and some other tricks!)

She embraces any opportunity to be creative and that certainly applies to her job at Brainworks as well. Barb works with a team of specialists to devise programs that best suit individuals who are in the midst of recovering from a brain injury. She is able to incorporate her sewing, costuming and art skills to help restore the creative elements a client lost after their accident.

One of the projects Barb did for Brainworks before she became involved in the clinical field was creating a caterpillar that transforms into a cocoon before it becomes a butterfly. Used as a tool for clients enrolled in hope therapy, the puppet-like caterpillar was designed to illustrate the therapeutic levels in metamorphosis. A book was written to go with it, which tells a story of the caterpillar emerging from its cocoon as a butterfly and the feelings and emotions it goes through during the stages of its transformation. Brainworks officially launched it (it’s sold as a kit) in 2015.

If I could be a full-time costume designer that would be really great but I wouldn’t have the opportunity to build a clinical practice with the people who inspire me every day. The people I work with who are recovering from trauma and brain injury give me so much inspiration and I’m bouyed up by their courage of what they do everyday. It creates a wonderful work experience to include both professions.

Right now, Barb has the privilege of mentoring other rehab therapists at Brainworks through her role as team leader, and that’s a pretty big deal because it just shows how much she’s really progressed in the last nine years with the company. And aside from all the costume designing, she still finds time to teach sewing lessons to a group of kids and adults every Tuesday at The Otherside Studio in town.

Her flair for originality runs full throttle in whatever she does. She’s always got something on the go – one door is closing and then another opens. Barb can’t imagine a life that doesn’t have a constant beat. Perhaps that lends a hand to her being able to continue to draw inspiration so she can keep stitching, and sewing and creating. Life is rich in texture when you’re doing what you really enjoy and sharing it with other people in many different ways.