Sharon Dalrymple knows it. She’s got some big shoes to fill.

“I’d like to think that I’m picking up the torch that he carried,” she says.

She’s trying not to cry but you can hear how much she misses him. Her beloved husband, Doug, who was a well-known, well-liked, community-minded man, passed away two years ago. The two worked side by side at the Huntsville Salvation Army for more than four decades and now that he’s gone Sharon’s finding the festive season a little bit more difficult to embrace without him. The wound of him not being here is still fresh. In fact, Sharon says, she had a bit of an emotional meltdown last week.

One day it’s alright and then all of a sudden it seems things come upon you and you think to yourself, ‘Okay, I have to keep going’. Christmas was his baby. Doug enjoyed Christmas and the toy drive and food drive and everything else. He was involved in so many things.

And that’s the truth. Doug did everything from helping organize the annual food and toy drives, to collecting donations through the Christmas kettles and anything else that needed to be done. On more than one occasion, he personally delivered a car-load of gifts to a family in need. For Doug, it was always about the kids. It was his self-given mission to make sure that every family—and specifically every child—got to have an extra-special Christmas. And although he’s gone, Sharon is doing her best to spread Christmas cheer the way her husband did. (Of course, they met at a Salvation Army function and enjoyed 44 years of marriage!)

Being the Salvation Army’s administrative assistant/bookkeeper means most days are spent at her desk busy crunching numbers and doing whatever it is that needs to be done administratively speaking. But it also means that Sharon’s smiling face may be the first one to greet you when you enter the building. Her kindness makes her approachable and she genuinely cares about people. She is the perfect fit, just as Doug was.

You’re not to be proud, but I am. As you grow older, you learn to not judge people the way you do when you’re younger. I have to be unconditional. It’s my responsibility to the people and to the world.

Her eyes were first opened to the good of the Salvation Army when she was just six years old. That’s when Sharon’s family attended what they thought was a community Christmas concert. As it turned out, it was a Christmas concert, however it was being held by the Salvation Army church. That particular event was significant as it opened the door to Sharon then attending the church’s Sunday school which eventually led to her involvement in volunteering. She’s been a part of the organization for over 60 years and has done a little bit of everything over the years. In 2007, she was lucky enough to land a full-time job at the Salvation Army after a long career at Huntsville District Memorial Hospital.

As a woman of strong faith, the Salvation Army stands for everything Sharon believes in. Its motto ‘Giving hope today’ is one that Sharon knows is drilled into the hearts and souls of staff and volunteers. And at Christmastime, that motto especially rings true. She’s honoured to be working for such a valuable, worthwhile organization, which is fulfilling her on a soul level otherwise she wouldn’t be so happy to show up at work every day. 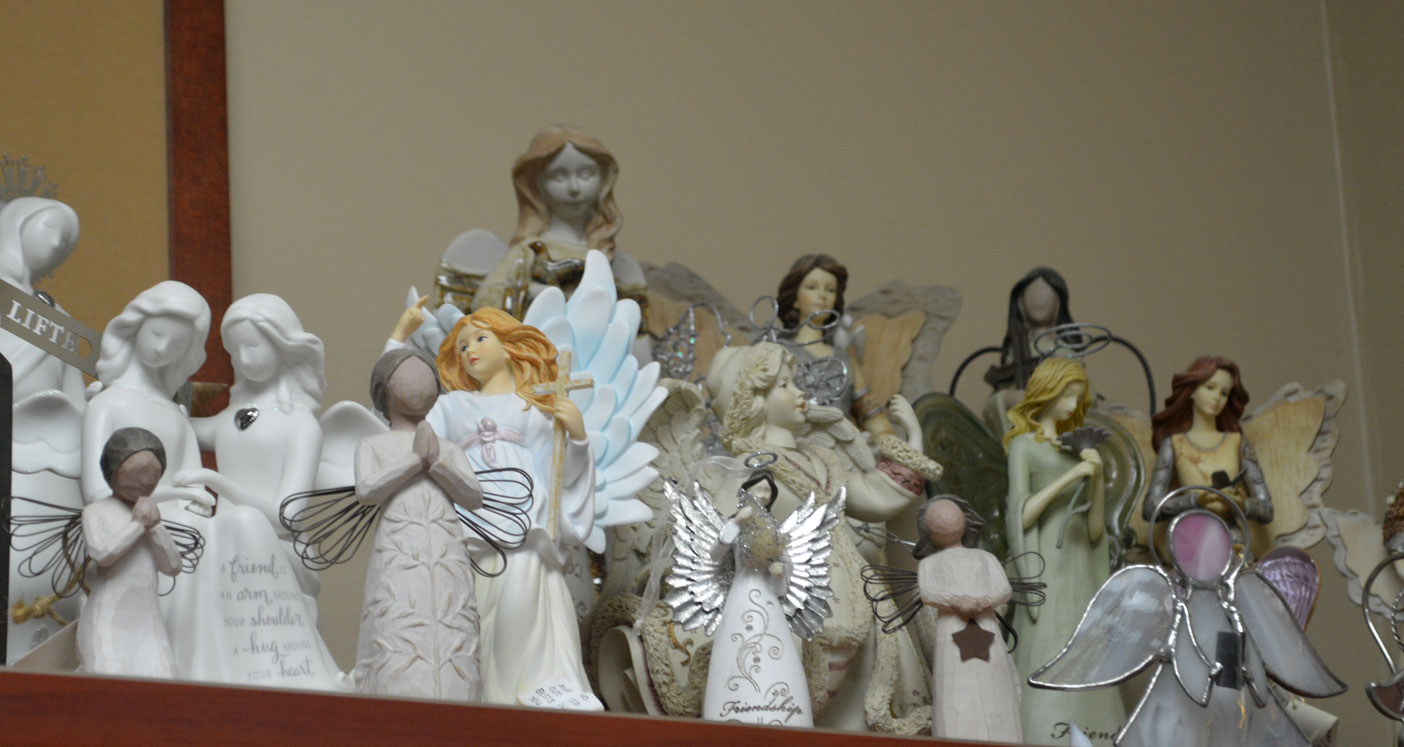 Her collection of angels is something to marvel at. She has dozens of the winged beauties! 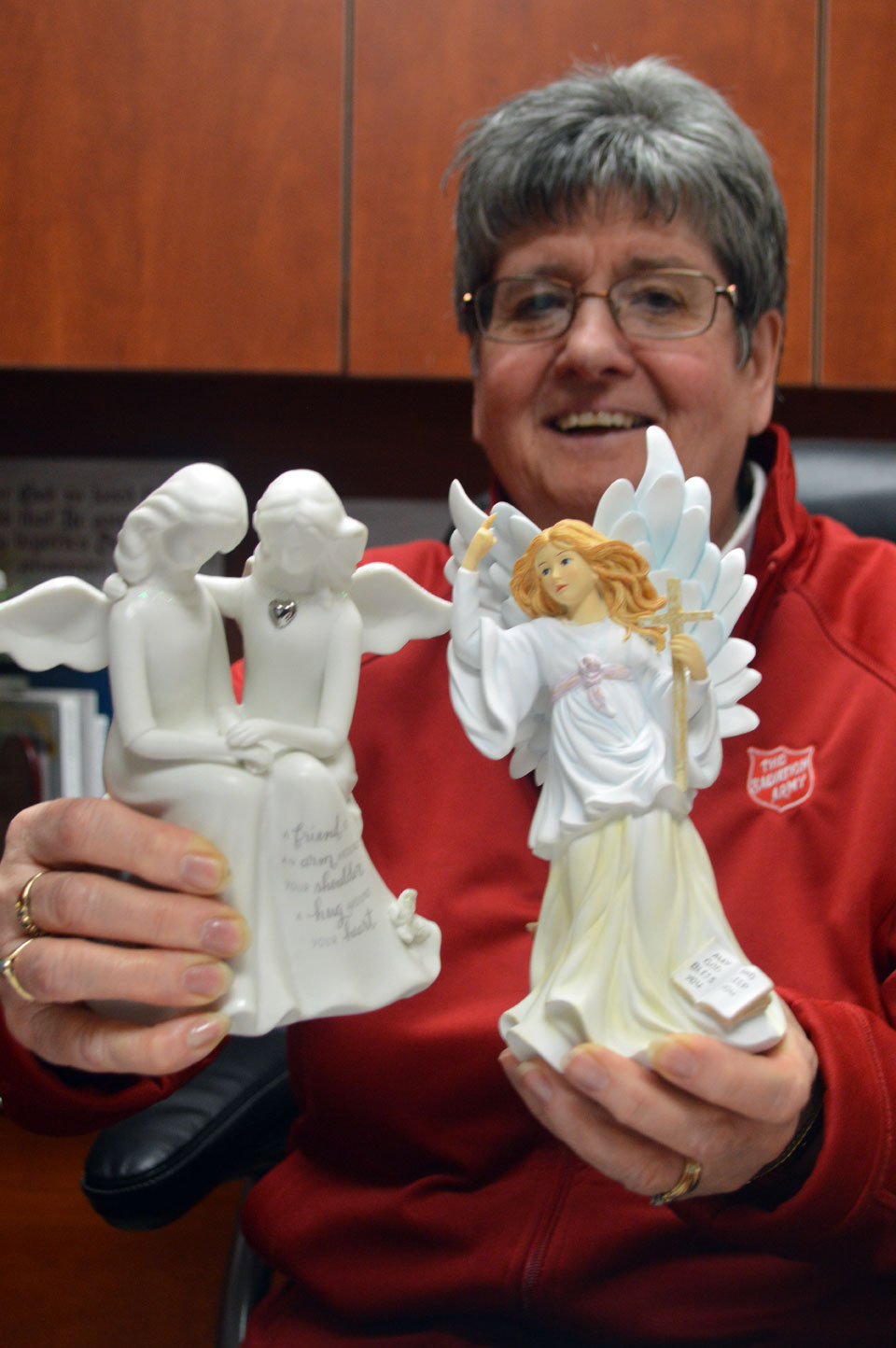 Each angel has a special meaning to Sharon.

“I miss Doug a lot but I try to keep busy,” she says. “I spend time with my grandchildren and my daughter-in-law and my son… they keep tabs on me.”

This year, the local organization helped well over 300 families (that means a hamper of food, a turkey with all the trimmings and gifts for the whole family). Food and toy donations were up from last year, a testament of the continued support and incredible generousity of this town. It never ceases to amaze Sharon, though. Some how, some way, when you put it out there to the universe, you get what you need, she says. Year after year, people step up to the plate to help, and in turn, that’s why the Salvation Army is able to help so many families in need.

“There’s a huge need here,” says Sharon, adding that she’s witnessed a surge in the number of people who need help. “I know that minimum wage has gone up but so has everything else.”

Sharon recalls a special memory when she and Doug personally went shopping for a family in need and then delivered Christmas right to their doorstep.

It makes you feel good knowing you have helped someone and it’s through the Salvation Army that God allows us.

At 67, Sharon says she won’t be going anywhere anytime soon. She enjoys what she does too much. She’s not ready to leave just yet but she doesn’t know exactly when that will be either.

“When God puts a roadblock in my way, that’s when I will give it up.”

And her co-workers, who Sharon speaks so highly of, return kind words about her.

“I honestly believe Sharon is a gift to me,” says Krystal Fuller, the community ministries coordinator as well as the food bank organizer. “She is always willing to jump in and help and she does it wholeheartedly. She’ll give you her all every time. She’s the most non-judgemental, kind and caring person I know. It’s a privilege to know her and call her a friend.”

There’s a real team sense among the Salvation Army staff, even at Christmastime when things get hectic. The last month has been extremely busy for staff and volunteers but this week is by far the busiest of the year.

The building has been bustling with activity as families come to pick up their food hampers and gifts. But as busy as the days are, the feelings of being able to help those who need it the most is the big reward at the end of the day.

“This is what I’m supposed to be doing,” says Sharon. “It’s a wonderful place to work. I’m very blessed.”