You are here: Home / Entertainment / Sound and Sight: Helena Renwick

Showing in the Partners Hall Gallery until January 27

In the fall of 1940, near the village of Montignac in the Dordogne region of southwest France, a teenage boy wandering the forest discovered a cave entrance through a hole that his dog fell into. He later returned with three friends. Descending a steep passage, the four boys found to their amazement that the walls were painted with the extraordinary images of large animals that ‘seemed to be moving’. Inadvertently, the boys had uncovered a cave system whose walls had been used by generations of painters, dating back to 15,000 BC. More importantly, these paintings depicted events and creatures, many long extinct―a pictorial history of the beliefs, magic and rituals held by ancient human beings.

Of particular interest is the means by which many of these 6,000 images were accomplished, not only their size and subject matter. Many of the works were painted using complex pigment and colours that were applied to the wall surfaces by dabbing or swabbing line and colour on the cave rocks. Some experts hold that the colour may have even been blown on, as if the artist were holding paint and colour on their hands, using their breath as a brush.

Having thus survived for so many centuries, hidden underground, these paintings obviously became of great interest to tourists and art historians. But the fragile environment in which they had been preserved and created could not withstand the exhalation from visitors nor the light and change of air circulation. The caves were closed to the public in 1963.

Helena J. Renwick, a Canadian painter working and living in Huntsville, believes that these cave artists, creating these vast works in deep sacred underground caverns, could not have been alone in their work. Since their hands were occupied with painting, there must have been those who shone the light for the workmen to see. Holding the Light as she has poignantly named her current exhibition, was inspired in part by that insight―that nothing comes without help. Such a rich metaphor conjures many interpretations that will draw viewers into the profound imaginative creations of a gifted painter. 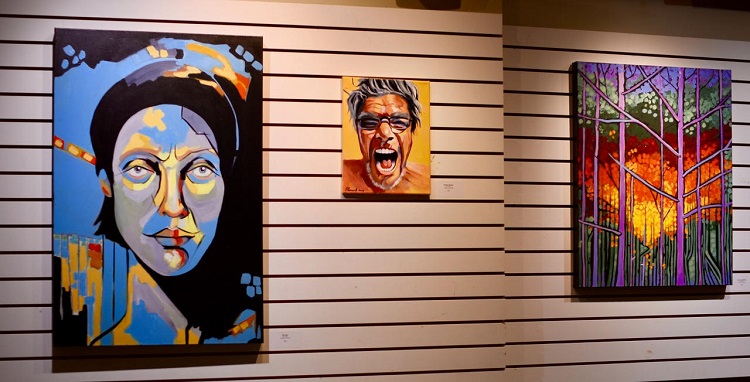 This exhibition of new works, comprised primarily of portraits, is of such striking originality that it cannot be missed. It is no accident that these paintings resonate so distinctly with the viewer. Every line, every colour, every bold stroke vibrates with resolve, insight, and purpose. The subject matter of each painted portrait is intimate, filled with allure in expression, action and detail.  The mystery of the human face and experience that informs these works is articulated through the various-sized paintings. Each face peers out of multi-coloured backgrounds, inviting contemplative speculation―what are they asking of us?

Helena Renwick has been a painter for much of her life and has been graced with the opportunity to work in her chosen field throughout her professional life. This last year has provided her a space to concentrate wholly on her art. Her current exhibition is testament to the discoveries she has made in technique, colour and composition, in what is clearly an exciting breakthrough perhaps or least a continuation of her strong sense of style as a painter. These works continue the broad stylistic exploration which began in her last showing 30 paintings in 30 days. 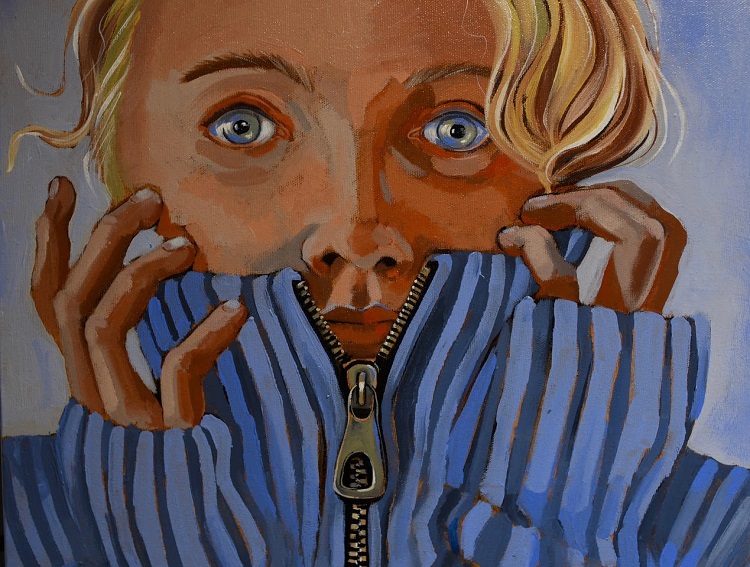 Growing up in Sarnia, Helena was raised by parents both encouraging of and dedicated to the craft and joy of pursuing art in its various forms. Her father, a potter, and her mother, a sculptor, gave Helena the foundation to explore and expand her abilities as a painter. Her childhood was filled with drawing and painting and with something always to chase creatively. She chose to develop her skill by attending art school at the University of Toronto where she also enrolled in the theatre school, specializing in theatre arts such as set design and lighting. She became theatre manager at Roy Thomson Hall after leaving university and through the theatre work met her husband. Together they moved to Huntsville some 24 years ago to establish her husband’s business.

Around 2005, Helena became front of house manager at Huntsville’s Algonquin Theatre, where she worked closely with various shows that came through the theatre, as well as contributing to set designs in theatre presentations. She became a very early member of the Huntsville Art Society. She became deeply involved in the Huntsville Festival of the Arts and has been an integral member of its development and progress in our community.

She was also general manager for many years of the Downtown Huntsville BIA, which has created such memorable events as the Muskoka 2/4 Craft Beer Festival and the Tiny Tots Halloween Parade, amongst many. While serving in this capacity, Helena often created set pieces, designs and artwork for street fairs and posters for many of the events taking place throughout downtown Huntsville. After an unsuccessful bid for town council in 2018, Renwick decided to step down from her role at the BIA after a ten-year term to dedicate herself to her own painting. She also teaches art classes at More Than Just Art in Huntsville and during the summer at Deerhurst Resort. 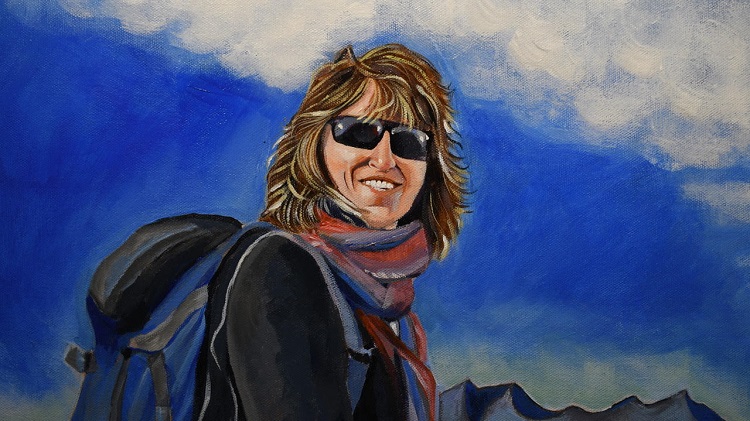 A year of work has produced her new show, Holding the Light. The title of the show is indicative of many of the values Helena holds dear. Harkening back to the light bearers of those ancient cave painters, discovered so many years ago, Helena reflects that need for each other’s help and support to accomplish most true endeavors. We need each other to overcome obstacles encountered and to rise to the challenges of daily lives.

But Holding the Light also conjures many other aspects of our living and experience. That theme is clearly evoked in this collection of deeply moving aspirational and inspiring paintings. Each one is characteristic of individuals being portrayed in their unique circumstance, but within each we are invited to see and participate in the light that creates all form and reflects back into and through us. 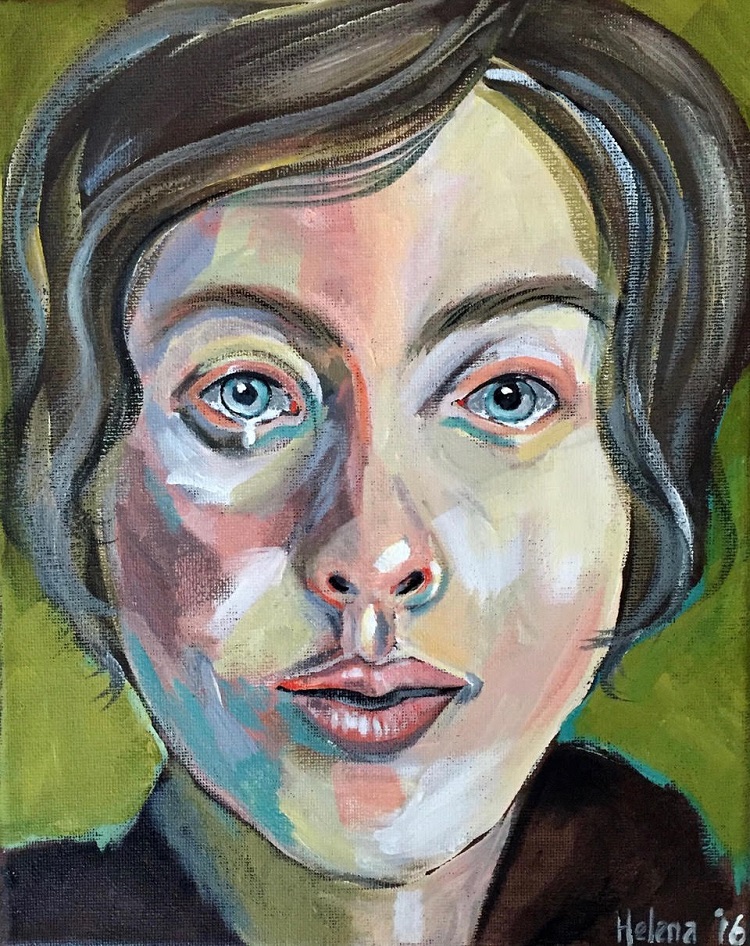 Holding the Light is being held at Partners Hall at Algonquin Theatre, Huntsville until January 27, 2020.

Nothing is what it seems. The contorted, angered faces, the vulgar verbal games, […]

Sometimes a void is helpful and sometimes it is useless.  Exclusion Blackwood helps to sort out the difference.

Since 1996, the Huntsville Festival of the Arts (HFA) has been selecting a local […]

This week we investigate Exclusion Blackwood, a more sophisticated version of Roman Key-Card. In it, players attempt to work around voids when trying for a slam. Sometimes a void is helpful and sometimes it is useless. Exclusion Blackwood helps to sort out the difference.

As more local residents self-isolate due to the COVID-19 pandemic, one local small business […]

Last week we reviewed how to use Blackwood to ask for Aces in a suit contract when your partnership is looking for a slam. The convention “Roman Key-Card Blackwood” is a more sophisticated version that we will investigate today.

What should happen when, from the bidding, you realize that your partnership may have enough points to investigate the possibility of a slam?