There are two very different sides to Jo-Anne Earl. She will be straightforward about that.

One day, she might be heading down the highway on her Harley Davidson with the wind in her hair and not a care in the world. The next day, in between greeting customers at her job at a local general store, she’ll be hand-painting a raccoon on a rock or making a cute, little leather satchel or bracelet.

“I have no stress in my life,” she admits, adding that it took awhile for her to get to the point where she’s absolutely content with herself.

Jo-Anne’s worked at the same little store for 20 years. You know, the one on King William Street that’s been there forever with all the moccasins and one-of-kind souvenirs and knickknacks. Jo-Anne’s the happy, free-spirited lady behind the counter with the green eyes and nice smile. She won’t tell you this right away but much of what lines the shelves and counters has been made been made by Jo-Anne herself.

When the owners went looking for some new Canadian-made souvenirs and knickknacks, they soon discovered they were hard to come by. Every cute little moose or wooden loon was made in China. That’s when Jo-Anne offered to make some things to sell in the store. The next day, she came to work with a few of her hand-painted rock creations. Her boss was impressed and he agreed to let her fill the shelves. (They made a deal where Jo-Anne could create on work time and the winter months are the best for that!)

“How I originally got into it was I came across a book about painting rocks,”she says. “I was sort of inspired by the techniques in the book so I tried painting a couple of my own rocks. Then I decided to paint my mom’s cat on a rock and it actually turned out pretty good. She just loved it. I guess it evolved from there.” 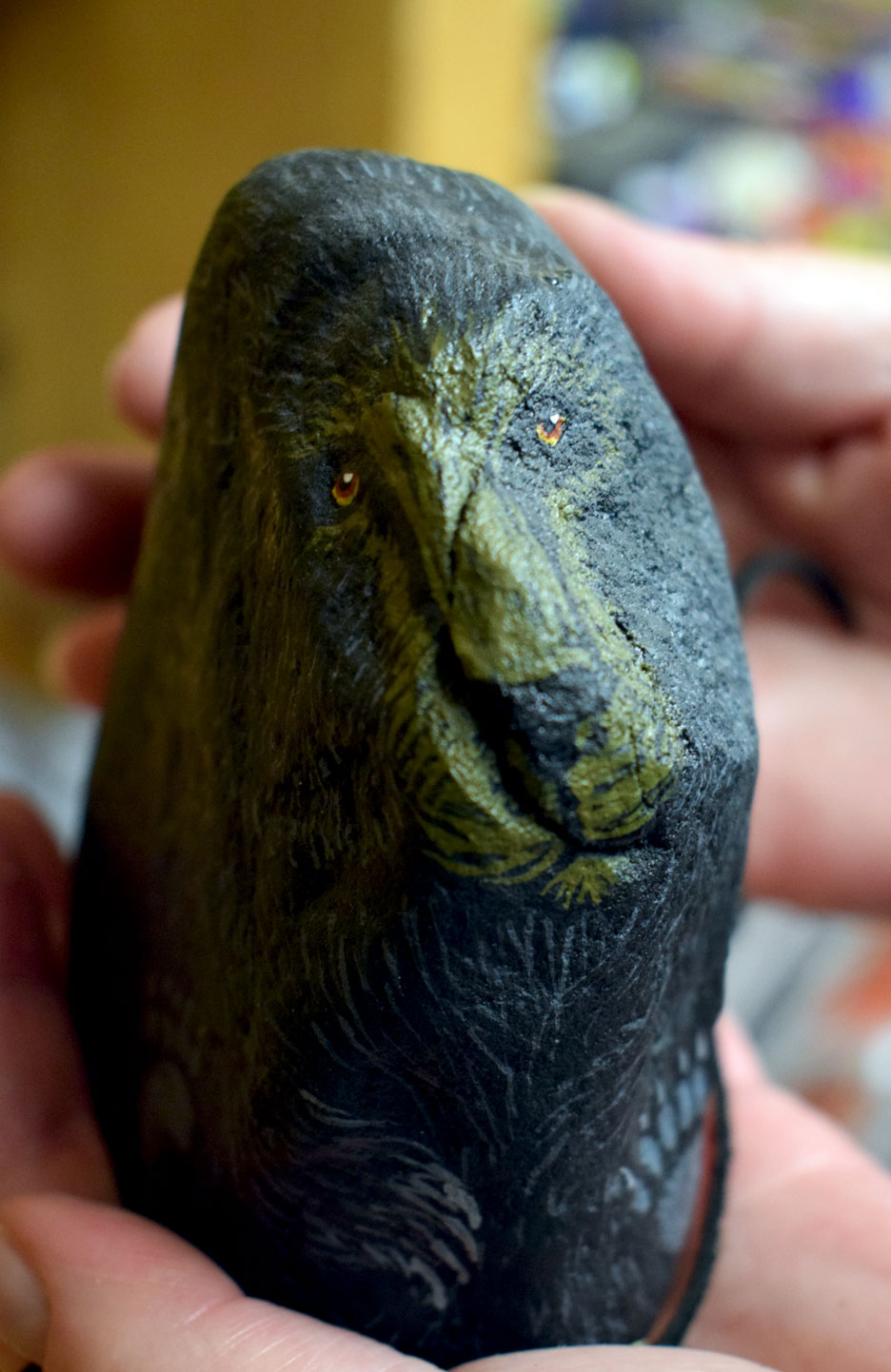 Jo-Anne can always see the animal in the rock before she paints it. In other words, she’s connected! 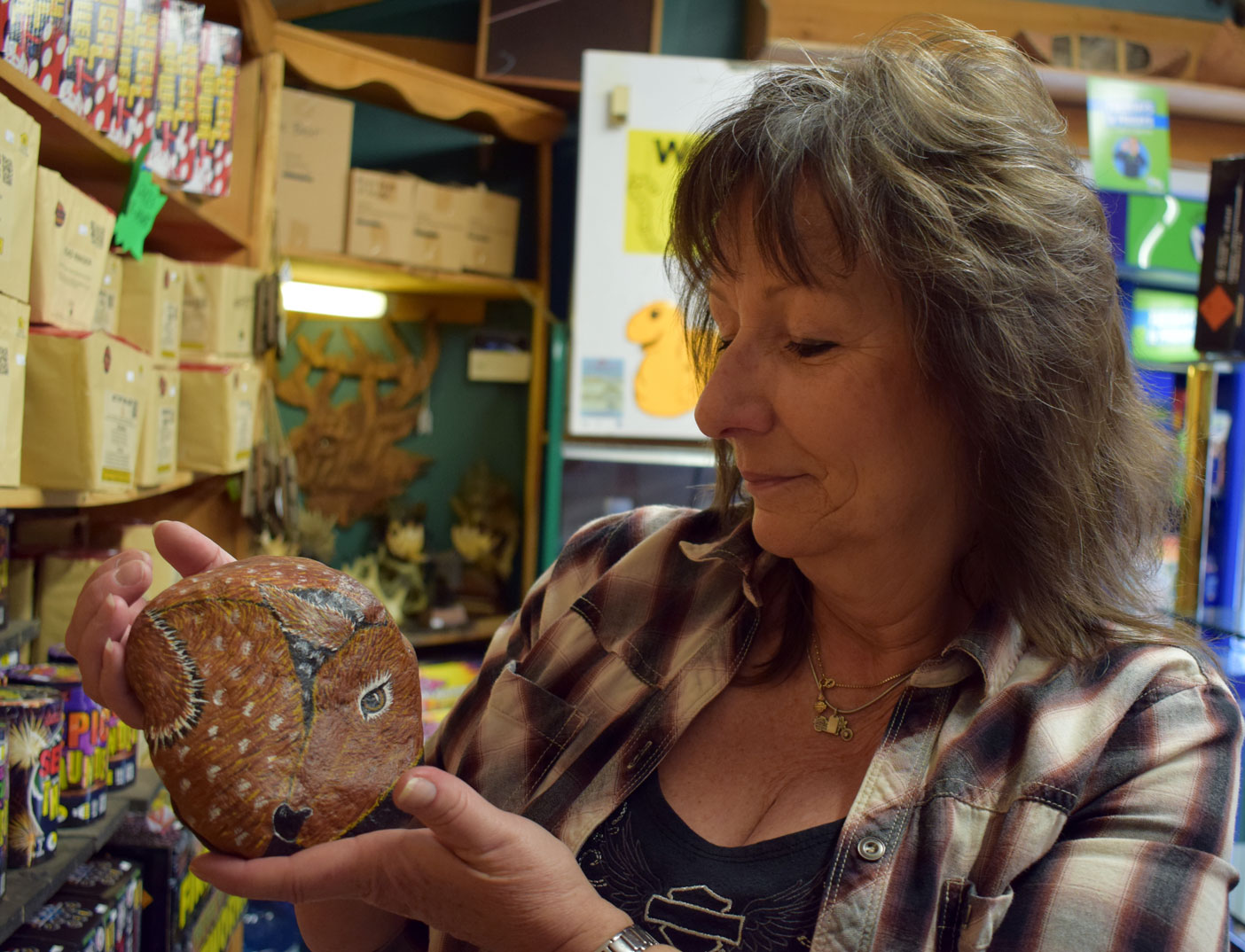 When she came across this rock she knew it would be perfect for a cute deer all curled up. 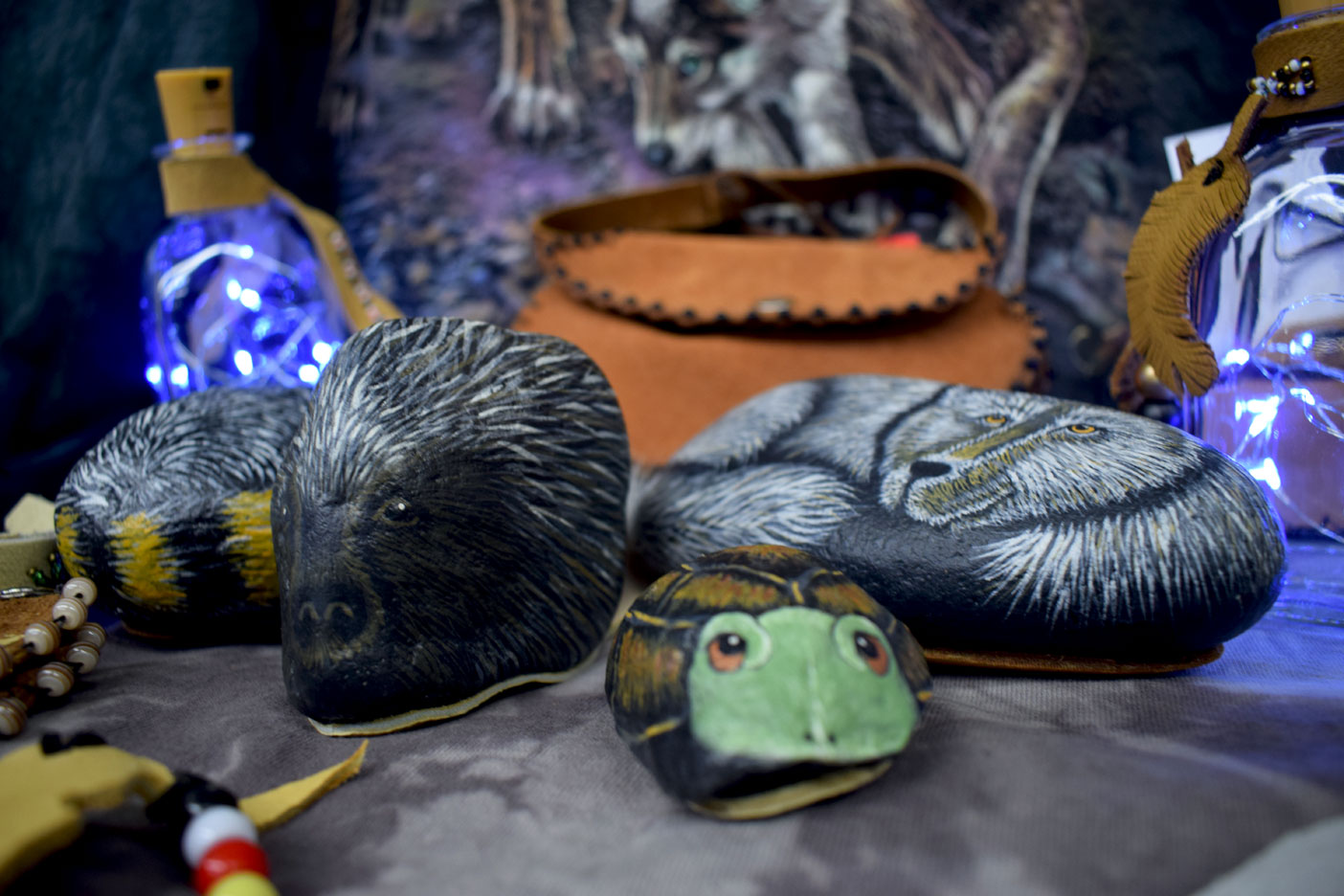 Just a few of her one-of-a-kind rock creations.

And indeed it did evolve. Over the years as she honed her craft she naturally developed an eye for finding the perfect rocks that will eventually come to life when she paints them. It all starts with an annual trip to her friend’s rock quarry with the goal to fill two milk crates.

I can look at a rock and see the animal I’m going to paint on it. I can actually see the deer curled up or the bear’s face. I like the ones that have a groove or an imperfection. Then I draw an outline on the rock with a lead pen. I’ll do the eyes and the ears and I might do that once or twice before I actually start painting it.

Jo-Anne uses words like “fun” and “relaxing” and uses her handiwork as an outlet to reflect and think. She’s not one to just sit and watch TV. Never has been. She would go insane, she says. Her mind’s always going. Always thinking about the next thing she could make. Sometimes ideas take months before they materialize.

And there’s so much more to Jo-Anne than just rock painting. She’ll try her hand at just about anything that suits her fancy. She’s become a master at making leather satchels and pouches, wallets, lighter holders, and bracelets. Her smudging feathers, beautifully hand-wrapped in leather and adorned with beads, have an almost magic look. 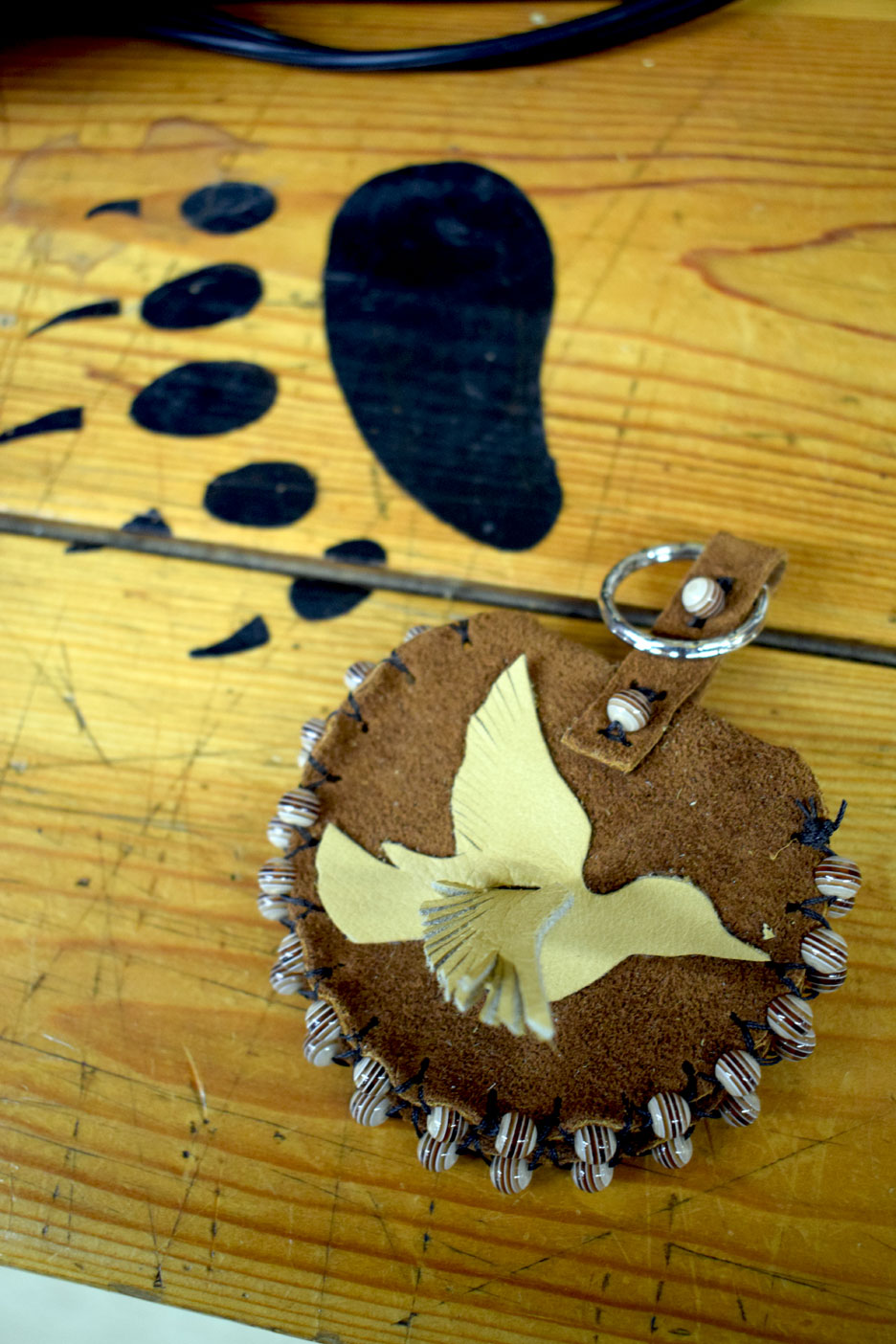 How adorable is this?! It would make for the perfect little change purse. 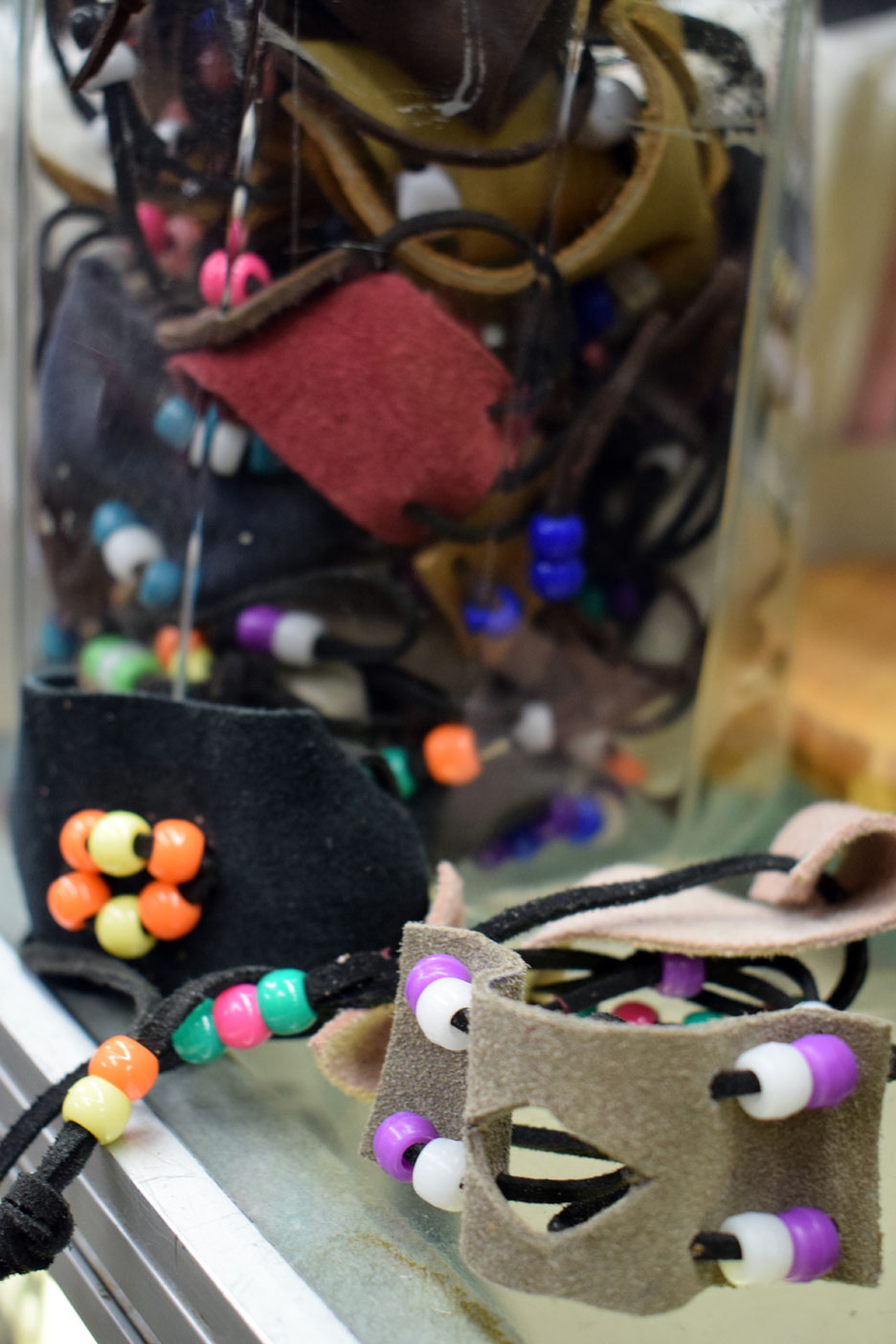 A bracelet or a hair tie, you decide how you want to wear it. 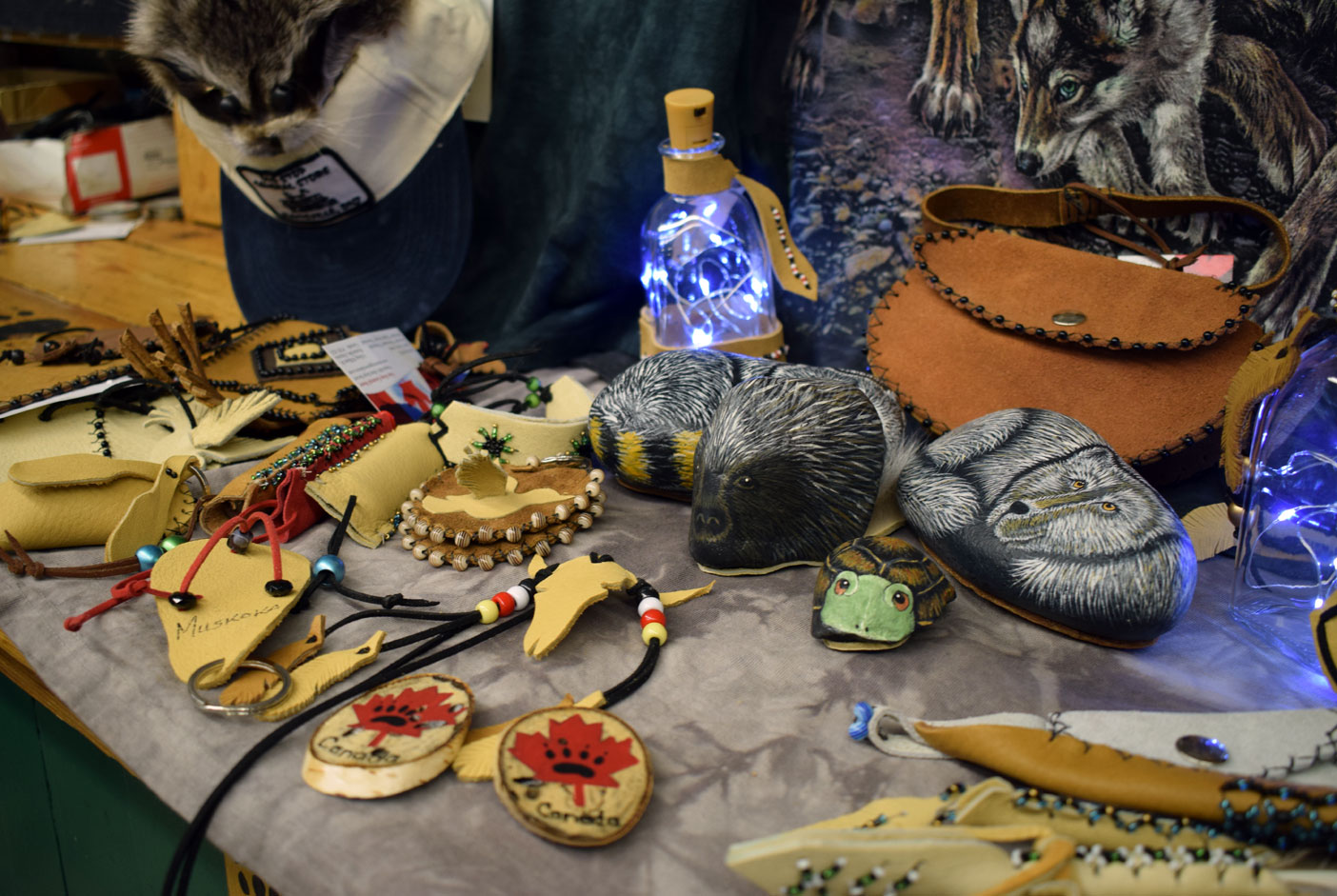 Her love for leather goes back to when she was just a little girl. If she had to pinpoint it, she was around eight or nine when she first got the creative bite. Her best friend’s family owned a tannery and she and Jo-Anne would use the scrap pieces of leather to make a variety of interesting things, like bracelets and slingshots and they even tried making halter tops and slippers.

Jo-Anne won’t come right out and admit that she’s an artist. But judging by the detail of the painted deer or fox perfectly curled up in the shape of the rock, or the ties and tassels and beading in her leatherwork, it’s plain to see that Jo-Anne definitely has artistic skill. You can tell that a lot of love goes into whatever she makes. That is evident on its own.

It just comes to me. I get these ideas. And the best part about it is that I really enjoy it. I’m lucky to be able to do what I love at a job that I love.

She wears a Harley Davidson shirt every day. Well, almost every day. And if she’s not wearing some kind of Harley Davidson clothing, she’ll have something on that bears the symbol. (She doesn’t even have room in her house for any of her creations because of all the Harley Davidson!) The iconic name means something special to Jo-Anne. It represents the best version of herself, which she discovered later in life. And, oh, how she loves her bike. She has put over 100,000 kilometres on it since she bought it. It’s opened her up to a whole new way of living.

“Unless you ride, you don’t understand,” she says, point blank. “You could have the worst day on the face of the planet, but once you head down that highway, there’s a real sense of freedom. It’s incredible. And no matter where you pull in, you’ll always find someone to talk to.”

Her job has given her the chance to meet people from all over the world and from all walks of life. That’s just one of the many perks. Another is the fact that she gets to be creative, too. And that is hugely rewarding for Jo-Anne. Combining business with pleasure certainly makes a life worth living to the fullest.