How far should officials go to keep residents and visitors to our town safe? Pretty far, it seems.

Thanks to a new Department of Fisheries and Oceans regulation, anyone using Huntsville’s public docks will be required to wear a personal floatation device (PFD) whether they plan to get into a watercraft or not. In Huntsville, the policy would primarily affect the Town Docks, the Hunters Bay boardwalk and the Locks.

“No water is safe water, especially if you can’t swim,” said Akiris Vin, a new Public Safety Officer with the DFO. “We’re adopting a zero tolerance policy on this to ensure that anyone using public docking areas will remain safe.”

When asked how many drowning deaths there have been to prompt this policy, he couldn’t cite numbers but said, “What kind of question is that? Even one is too many.”

Vin also highlighted the positive side of the policy. “It will create jobs because people will need to be monitoring people on the docks at all times.” Vin went on to say that at least eight people will be hired in the Huntsville area alone.

PFDs will be available at each location for use free of charge to those who forget to bring their own or aren’t aware of the policy, but Vin says the Department hasn’t ruled out the possibility of a user fee in future. “We’ll have to see how it goes. We’re hoping people don’t wander off with them and we’ll have to look at how long they last. It could be a significant budget item and we may need to offset that with some kind of fee.”

Town of Huntsville officials couldn’t be reached for comment, but the PFD supplier who won the DFO’s Request for Proposal said the ruling will be a boon for her industry. 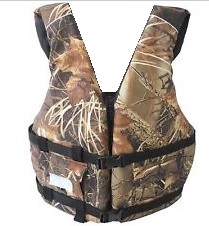 “I think I was awarded the contract because I came up with some pretty stylish designs and have a patent pending on an odour retardant that the DFO seemed very excited about. I have a leopard print for the ladies, camo for the men and a Sponge Bob motif for the kids,” said Mia Mono, owner of the aptly named When Your Boat Doesn’t Float PFDs.