Neighbours are up in arms over a single residential home on Cliff Avenue being demolished to make room for a parking lot.

The lot at 10 Cliff Avenue, which also backs onto Meadow Park Drive, was recently purchased and cleared to provide staff parking for the dental practice of doctors Sharon and John Koncan.

But area residents were before Huntsville’s Planning Committee on January 13 to oppose the planning approvals required for the parking lot to proceed.

Residents don’t want a parking lot in their neighbourhood

“They sort of put the cart before the horse here by pulling the house down,” said Meadow Park resident Tom Smith. He said the rezoning of the property to allow for the parking lot should’ve happened before the house was torn down. “I disagree with this whole process,” he added.

Other concerns expressed by residents included the parking lot’s impact on property values, privacy, more noise, more lights, the lack of privacy fencing and landscaping, loitering, the lot’s proximity to a school bus stop and its effects on the general feel and look of the neighbourhood.

Wendy Laver, an adjoining property owner, questioned what other proposals might come forward. “We need to take care of our residential areas and the people that live there,” she said.

Planner John Gallagher was before the committee on behalf of the Koncans and said the entrance to the parking lot would be moved so car lights don’t interfere with the school bus stop. He also said the area would not have additional lighting and noted that it falls under a transition area of the central business district, which allows light commercial uses.

“It should be noted that the transition area supports a variety of uses and those uses can include medium density residential as well as limited commercial development. So there could in theory be a commercial building on that property and still meet the requirements of the Huntsville Official Plan,” he said, adding no building is being proposed for the site, just parking.

Gallagher said the staff parking lot would house about 15 cars and free up additional parking space at the Sunrise Centre off King William Street, which houses the dentists as well as an orthodontist and optometrist. “I mean another alternative is having vehicles parked all up and down Cliff Avenue and Meadow Park and it’s completely legal because it’s not a no parking zone.”

He also spoke about putting in place a cedar hedge buffer. In terms of noise complaints, he said the contractor used to plow the lot already being used for parking does not have a beeper on the snowplow.

This parking lot is not going to be your typical parking lot. It’s actually going to be a grassed parking lot. They put down a certain type of base on that property that will allow grass to be grown, so the majority of the time it will have an appearance of a grassed lot. planner john gallagher

Councillor Nancy Alcock, who is chair of the committee, asked the residents to consider the fact that the parking lot would be more attractive than your standard asphalt parking lot.

A parking lot is a parking lot whether you dress it up or not. It’s like putting lipstick on a pig.  Cliff Avenue resident Luis Rivero 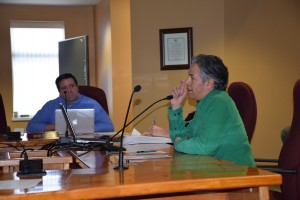 Patrick Ramirez, also a resident of Cliff Avenue, said, “If you walk this neighbourhood you would see that this lot is a very integral part of that neighbourhood… If that lot is rezoned and a parking lot is put in place, that neighbourhood is just not going to have that same feel.” He also said the house that was demolished could be considered affordable housing. “We need more properties like that not less.”

Councillor Bob Stone seemed to agree with the residents. “I understand it’s a transition area but it’s very much a residential area and obviously by the comments we’ve heard, they’re worried about the property values as well as the whole community,” said Stone.“I’m worried that if we approve this we’re going to be rewarding bad behavior by the fact that the house was demolished first before the use was approved,” he said, adding the approval is easier now that the house has been demolished and there’s a vacant property there now.

Councillor Karin Terziano had a different take. “We need to understand that the Official Plan actually supports this and this is a planning committee meeting,” she said. She likened the issue to the parking lot behind the Hometown drugstore on Main Street, which she said was once a residential home. “We have lots of areas that have transitioned into parking lots and into commercial from residential because we grow as a municipality and I think this is almost natural that we will continue to grow. And some day, not in our lifetimes, that entire side of that street may become commercial or something similar to commercial because that’s what happens when towns grow.”

In the end, committee approved the rezoning conditional on a site plan approval. The approval is contingent on several requirements: installing a privacy fence and a two-metre high cedar hedge, ensuring that the snowplow used to clear the lot does not have a beeper, not installing additional lighting on the property, and shifting the entrance more toward Morris Avenue.

The site plan will make its way back to committee before it is finally approved.