Joe Van Hoof still wears the same big smile and upbeat attitude that characterized his 28 years with the Ontario Provincial Police. Referring to his early retirement Joe chuckles, “The Harris government opened up a window and I jumped through it.” He retired from the Huntsville detachment in 1999 but according to the Facebook group, If You Grew Up in Huntsville, there are lots of people that remember him fondly and with gratitude.

Fifteen of the Van Hoof family members arrived in Canada from Holland in the 1950s. Joe grew up in Petawawa and recounts how he and some young buddies were accused of some minor vandalism, which he swears he did not do. “I was interrogated though and my dad was called down to take me home and discipline me.” He laughs, “Maybe that was when I decided if I couldn’t beat ’em I’d join ’em!”

He took to policing immediately. He laughs, “What wasn’t there to like? I was young, I got to drive around in a brand new car and meet people all day long.”

Before he was even assigned a uniform he was called to the scene of a bad motorcycle accident on the 401. He says, “I was wearing the only good suit I owned and I was asked to hold down a 6′ 4” guy with bones protruding through his skin to keep him from jostling in the ambulance. It was only a seven minute drive but it felt like seven hours.” He adds, “That was it for that suit!”

Van Hoof’s first real posting was just outside of Detroit in March of 1973. It was a tumultuous time in the U.S. and there was spill-over into the Canadian border towns. He shakes his head, “It was a busy, busy posting. Trust me, there was no Timmie’s or going home for lunch back then.” His wife Irena recalls, “It was so hot and humid and Joe was never home. I asked when we could leave almost immediately.”

Van Hoof applied for a transfer ‘north’ in part because Irena’s physician mother recommended a cooler climate for their son who suffered from celiac disease. (Joe and Irena have two sons: Christopher is an engineer in the U.S. and Julian works in finance on Bay Street.) Pelee Island was as north as they’d get for the next two years. It was a peaceful one-officer post with a tiny population. Joe recalls, “Some days I didn’t even wear a uniform.” He backtracks, “Maybe I shouldn’t say so since it’s against regulations. Irena wryly suggests, “You’ve been retired for almost 20 years. I don’t think it matters, Joseph.”

The family was happy to finally arrive in Huntsville, which Joe remembers as a much quieter community than it is today. He reminisces, “When you work in a detachment, it’s like family. We did lots of socializing with each other and out in the community too.”

Van Hoof feels that he was part of a golden age of policing. He recalls going into every hamlet and side-road in the large area the Huntsville detachment covered. He thinks that it should still be that way. He’s convinced that some areas never see a police officer unless there is a problem.

I think it has become too reactive. In many ways I’m glad that I retired when I did. I believe in a proactive form of policing and while I’m sure there are those who would disagree, I just don’t think it’s done that way now. That’s a shame in my opinion. Years ago if your mailbox was damaged or your lawn decorations stolen a police officer would come out and write up a report. Now you’re directed to your insurance company.Joe Van Hoof on how policing has changed

Joe was a fan of the small log Community Policing building by the swing bridge where OPP officers took turns being available in a friendly and non-intimidating way.

Sergeant Dick Wood asked Joe to act as a Youth Officer in a role that a Forester write-up at that time called “preventative policing”. Van Hood recalls, “If a young person came to our attention, he/she would have to deal with me. I never wanted to give a young person a record that would follow him or her around forever unless I really had to.” He explains that this kind of policing involves building relationships founded on trust that goes both ways. “Before this model we just applied the law in a hard-nosed kind of way.”

Prior to policing the halls of HHS, Van Hoof visited eight elementary schools, which were part of the Values, Influence and Peers (VIP) program, which helped students in Grades 6, 7 and 8 make informed choices related to values and the law. He calls Harry Brown, who taught at Spruce Glen, a “different kind of teacher”. Brown was also Joe’s much-admired mentor. Brian Wilson (probation officer) spoke to the students about his work and Canadian Tire manager Pat Lynch explained the real harm of shoplifting. “Some kids thought of it as a victimless crime and it opened their eyes.” At the end of the course the kids put on a play for the entire school dressed as judges, police officers and lawyers and shared what they’d learned.

Joe was a bit of a rebel. Wearing the OPP cap was a part of the uniform and you were to have it on at all times when you were working. “But you have to use common sense. There were some times when the cap might have seemed intimidating so I took it off.”

Irena says that she never worried about Joseph while he was at work until the awful day in 1981 when OPP Constable Richard Verdecchia was shot and killed by two armed robbers when he stopped to offer assistance to a vehicle that had entered a roadside ditch. That shift was supposed to be Joe’s.

Most of Van Hoof’s time in Huntsville was in some form of Public Relations. It suited his outgoing persona.

Van Hoof spent his last five years at Huntsville High School in Youth Policing. He knew everyone and they knew him. When he was thrown from his horse and injured, dozens of kids made a gigantic card and sent messages of encouragement. He was a respected and well-liked presence at the school. 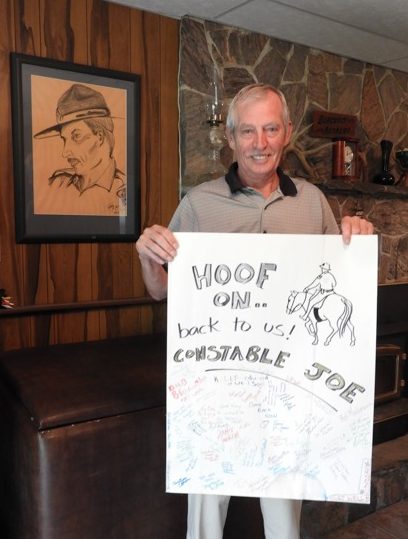 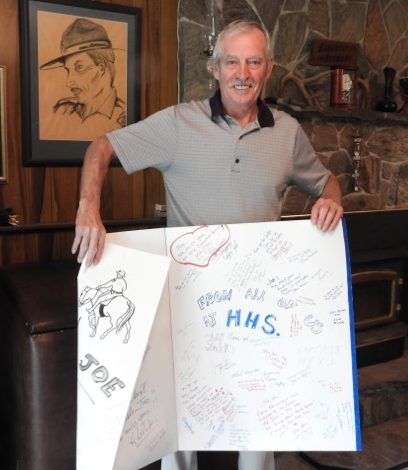 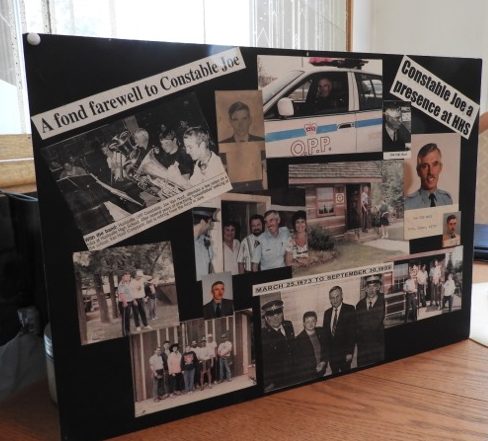 Joe loved spending lunch hour in the high school cafeteria. Kids would seek him out to ask advice and confide in him. The law had to be followed but sometimes applying common sense was the best approach. Joe remembers, “More than a few moms thanked me for setting their kids straight. I always told them to tell their parents what they’d been up to before I had to do it.”

Constable Van Hoof was no push-over. Charges were laid when called for but alternative methods of policing often did the trick for less serious infractions. Joe remembers one situation where a student’s skateboard had been stolen. “I knew who did it and I confronted him. He denied it but I made sure he knew that I knew that he was lying. I told him that if he didn’t return it, he’d be charged. He brought it back and avoided having a record.”

Joe says that he was easy going but he was always on the lookout for somebody skipping class or acting out. He says, “And if a classroom door was open, I took that as an invitation to walk in and to see and be seen.”

He smiles, “I never liked paper work so it was always better to handle things before I had to get my book out! In the old days you wrote something about a student or a family and it got filed and put away. Today it lives in the computer forever.”

Joe had two retirement parties but he would have been quite satisfied with the one he had at HHS. Some of his favourite teachers were retiring too and he was included. Spotting a drawing that a student had done of him, Joe asked if he could buy it. The student gave it to him and as thanks, Joe went to her house a few days later and gave her his last, brand new police cap.

As much as he enjoyed his job, Joe loves retirement. He and Irena spend much of the winter in New Braunfels, Texas socializing with other snowbirds, including a retired cop from Calgary. The town was founded by German settlers in 1845 and boasts an old world heritage that combines perfectly with its small town charm.

Joe loves the peace and quiet of his Huntsville country home but on the August long weekend, the Van Hoofs play host to 150 family members from near and far. Their property is dotted with tents, RVs and family across multiple generations. He cherishes this special family time.

Joe Van Hoof says, “I chose to stay in this community when I retired. I could do that because I didn’t have any reason to look over my shoulder. I treated people with respect and I earned their respect.”

Joe was a good cop and a good guy. He still is.