You are here: Home / News / Planning Committee turns down the addition of eight rental units on Madeline Street

A plan to sever a lot containing a single residential home on Madeline Street, off Sabrina Park Drive, in order to build two four-unit townhouses, did not go well for proponents Tom Harsanyi and Frank Van der Staay.

They were before Huntsville Planning Committee on March 16, along with their planning consultant Savas Varadas of Plan Muskoka.

The proposal called for the creation of an additional lot with an area of approximately 1,990 square metres in size and 24.6 metres of frontage on Madeline Street. The retained lands would have been approximately 1,435 square metres in size with 15 metres of frontage on Madeline Street and house the second four-unit townhouse proposed as well as the single residential home currently on the lot. The lands to the rear are steep and zoned Conservation. The proponents were seeking an exception to the rear-yard setback to reduce it from the required 10 metres to five metres.

Two letters opposing the development were received by the Town. According to Huntsville’s Manager of Planning Services, the objections included: the frontage on each lot not being equal, concerns about the increase in the density of the area and parking issues on the street, objection to the setback exception sought, additional traffic in a cul de sac, the poor condition of the road, water flow, and the condition of the existing septic system on the property and whether or not sewer services to the property would be available.

Varadas told committee that the new rental units would be designed and constructed to be categorized as affordable and would be geared to seniors. He said the character of the area is already mixed in residential styles and argued that Huntsville’s Official Plan promotes and encourages affordable housing in the core area of the Town. In terms of intensification, he said the OP sets out density maximums for the different levels of residential developments.

“Low density is capped at 20 units per hectare and this development calculates an approximate density of 23.5 units per hectare. It’s slightly over what you’d classify as low-density residential (development).” He also said should the request for a five metre backyard reduction be denied, the building’s positioning would cause greater impact. “The alternative would be to turn that building perpendicular to Madeline Street and I believe with the four units now facing the existing dwelling to the West, I think the impact of that would be far greater than what’s being proposed.”

Varadas said the lands behind the proposed townhouses are steep and zoned Conservation and comprise part of the planned Eagle Ridge subdivision. He said no development is proposed there other than a sitting area for residents. He also said that in speaking with the District Municipality of Muskoka “they believe it’s possible for a temporary connection to service the proposed severed lot with water and sewer without any need for extension. It’s the proposed retained lot that will require an extension of services. It’s the intent of my client to start the development on the severed lot and then work towards, in the future, developing the retained lot as well.” 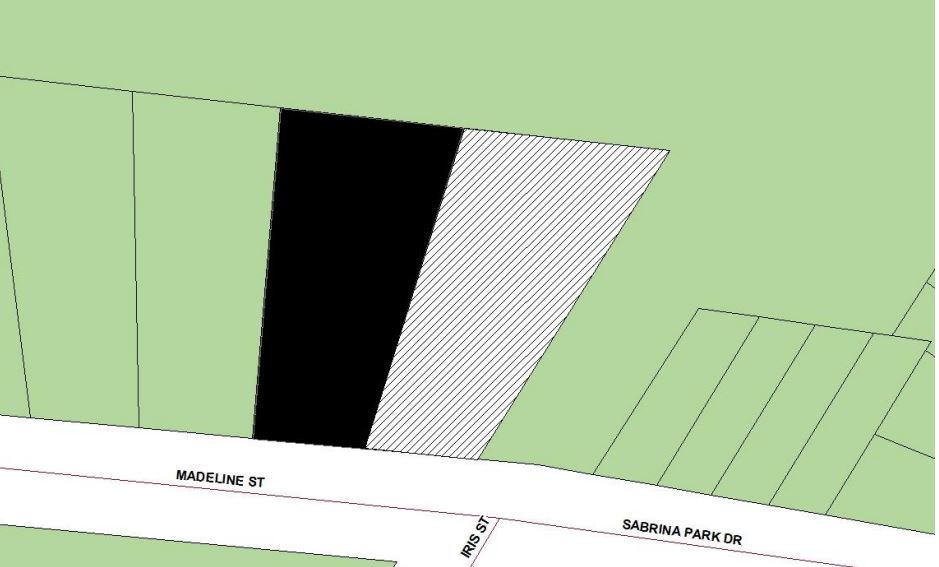 Adjacent property owners on Madeline Street were before Committee reiterating their opposition to the proposal. “We are not anti-low-income multi-unit housing, as I’ve stated our immediate neighbourhood already contains several buildings of this type. What we are strongly against here is adding even more multi-housing units to this already densely packed, highly diverse neighbourhood,” said Mary Love, adding that her bedroom window would be facing the proposed parking lot associated with the new development, a two-storey, four-unit building “that would tower over our bungalow. That’s not okay with us.”

She argued that affordable housing is not required to be stacked heavily in one particular neighbourhood. “Affordable housing should be mixed throughout a town. Huntsville is a growing town, if the Official Plan is such a driving force and the need for affordable housing, why are multiplex units not being built into the new subdivision plans on suitably sized lots prior to their development?” she questioned.

How can you say it is good planning to jam in two, two-storey fourplexes right at the end of the street of single family homes which provide the balance in this heavily populated part of town?
Madeline Street resident Mary Love

Love also said two-storey housing for seniors does not make sense. “They’re looking for housing without stairs,” she argued. She added that single-level handicap units are what this town really needs.

In the end, Committee turned down the proposal, despite staff’s recommendation for approval, without further comment.