You are here: Home / Community / On the dark side: Meet Kandis Sinister (and Troy, too)

Main image: For Kandis Sinister, embracing the darker side of life has allowed her to express her love for all things strange and unusual. Here, she sits in front of the Florence Street East home she shares with her husband Troy. They might get close to 200 candy-seeking kids tonight.

It’s Halloween! Some people love it, others despise it. For Kandis and Troy Sinister, it’s not just a one-night affair. Halloween is embraced all year long in their unique Florence Street East home where it’s all about bones, skulls and antlers.

Kandis Sinister isn’t afraid of anything.

Not spiders or ghosts or impending doom. And that also extends to include goblins, ghouls and zombies.

But on her front porch stands a six-foot tall werewolf, with big fangs and three-inch claws.

“That thing scares the hell out of me,” she says.

In every corner of the Florence Street East home that she shares with her equally eccentric husband, Troy, there is something to talk about. It’s a modern-day museum with a wide variety of the unusual and uncanny. Century-old keys that belonged to the Barton Street Jail in Hamilton hang by the front door. The ‘wall of death’ is always a conversation starter with any new guest. It’s a wild assortment of taxidermy pieces Kandis has managed to score over the years (picture the head of a barracuda and a giant barn owl that appears to be swooping in). 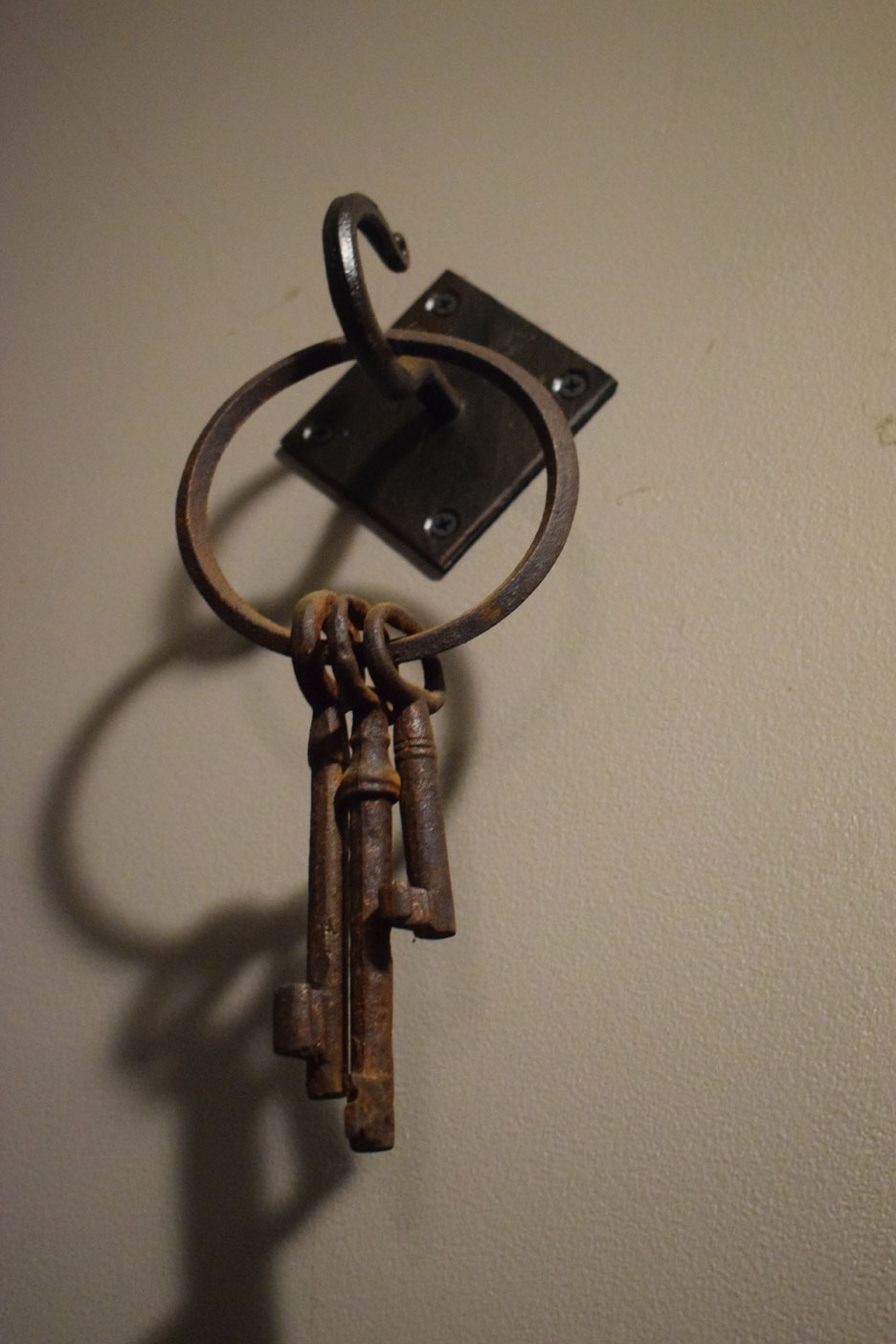 These keys are over 100 years old and came from a jail in Hamilton. Kandis and Troy appreciate the history of some of their unique finds. 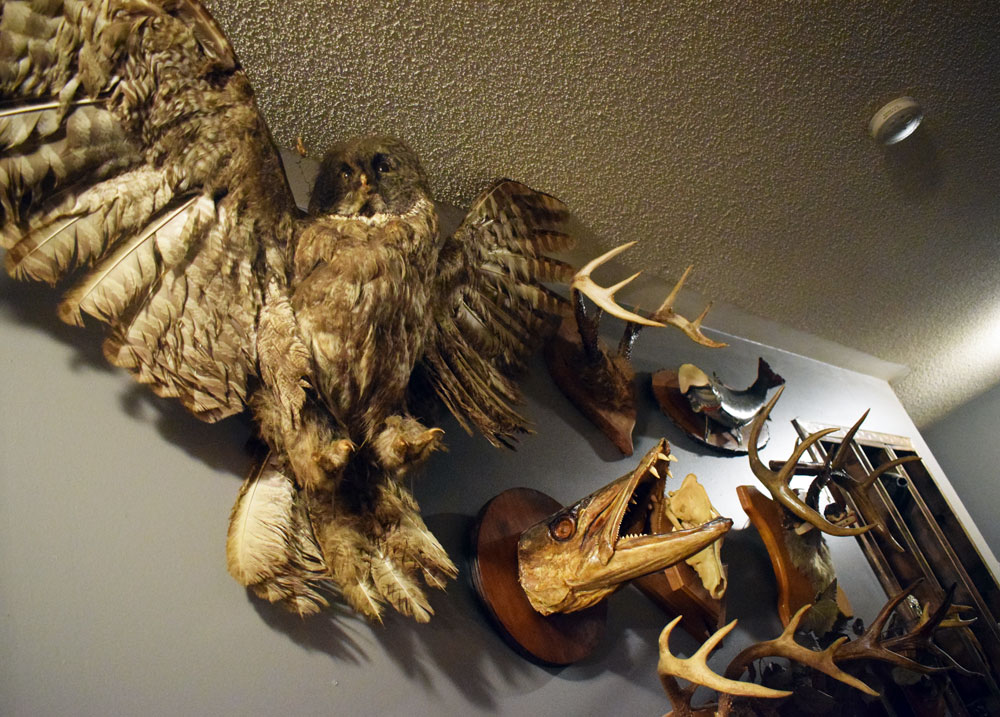 If you’re friends with Kandis and Troy then it’s likely you’re familiar with the ‘Wall of Death’, Kandis’s collection of one-of-a-kind taxidermy pieces. 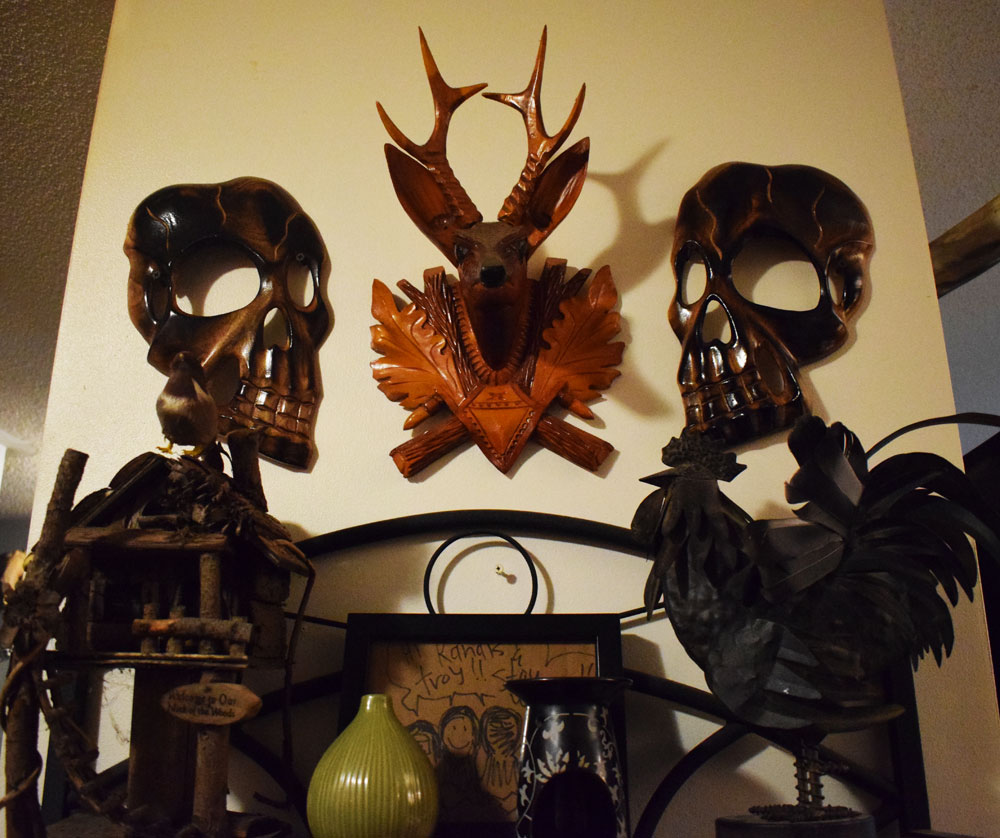 The skulls came from Cuba more recently and the wooden deer from Ukraine many decades ago.

The Sinisters’ collection of trinkets and knickknacks are tastefully—and most of all beautifully—displayed from one end of the house to the other. All three floors boast rare and unique finds. It’s the perfect blend of classy meets goth.

We call it sparkly cottage goth. There’s a lot of skulls, bones and antlers. It’s Halloween all year long in our house.

And that’s exactly what the Sinisters want. Because tonight, for them, it’s the best night of the year. Halloween means so much to Kandis and Troy. It’s a way of life, really. It’s become a part of who they are. The inside of their home in town tastefully matches the outside, except eventually everything outside will be taken down and stored away until next year.

“We put so much work into it it’s a shame to take it down,” says Kandis.

The property is decked out to the nines and designed to intrigue even the tiniest trick-or-treater. There’s a mini-graveyard with a glowing skull and hands coming out from the earth. The deck is adorned with hanging skeletons in tattered clothing. Other weird ghost-like creatures are blowing in the wind. Beside the scary-as-hell werewolf is a larger-than-life Tim the Enchanter (taken from John Cleese’s character in Monty Python and the Holy Grail.) There’s two skeleton dogs and several glowing skulls and a black cat with piercing yellow eyes that peers out from underneath the front steps. Up top, on the the upper balcony, are several giant blow-up ghosts and two big glowing pumpkins.

There’s so much to see and some of the decorations even make sounds. A few minutes won’t cut it. You’ll want to stay awhile to really take it all in.

“Some of the little ones stay at the bottom of the stairs looking pretty terrified. But the bigger kids always love it.”

It all started because of an urban myth…

When Kandis and Troy first moved to Florence Street they were warned of the possibility of their house getting egged or toilet papered on their first Halloween. They decorated, of course, but thankfully they didn’t get hit by the supposed vandals.

We hand out full-size chocolate bars so I think that earned us some brownie points. We’ve had as many as 200 kids some years, depending on the weather.

Every year since, Kandis and Troy have made it their mission to add something—or a few things—new to the outside of their home. To see what they’ve done in the last eight years is remarkable. Countless hours and thousands of dollars have gone into creating a visual Halloween masterpiece. Not having kids of their own makes the Sinisters that much more excited to see kids come to their door. 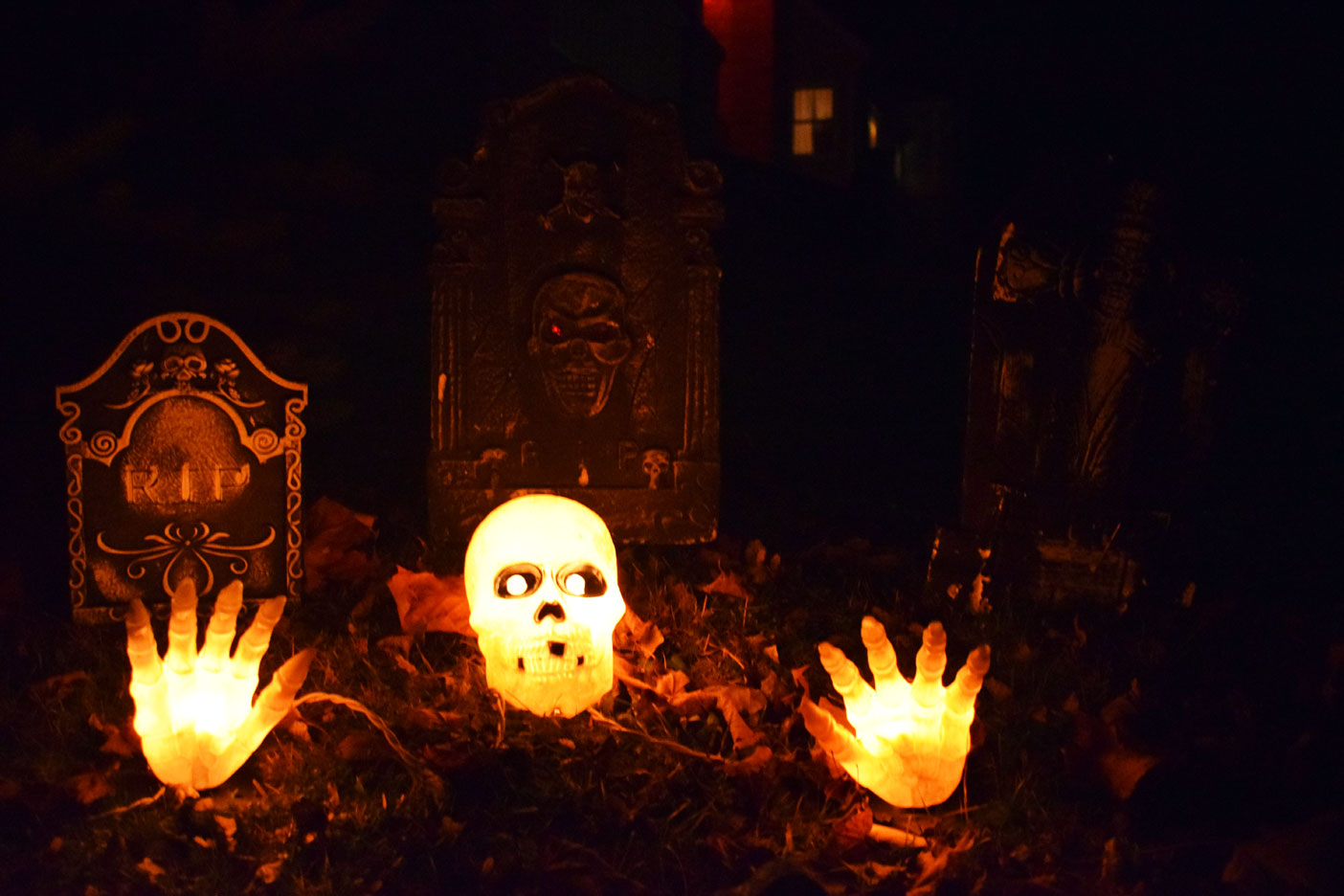 First, you’ll have to pass the mini graveyard with this weird-looking skeleton coming out from the ground. 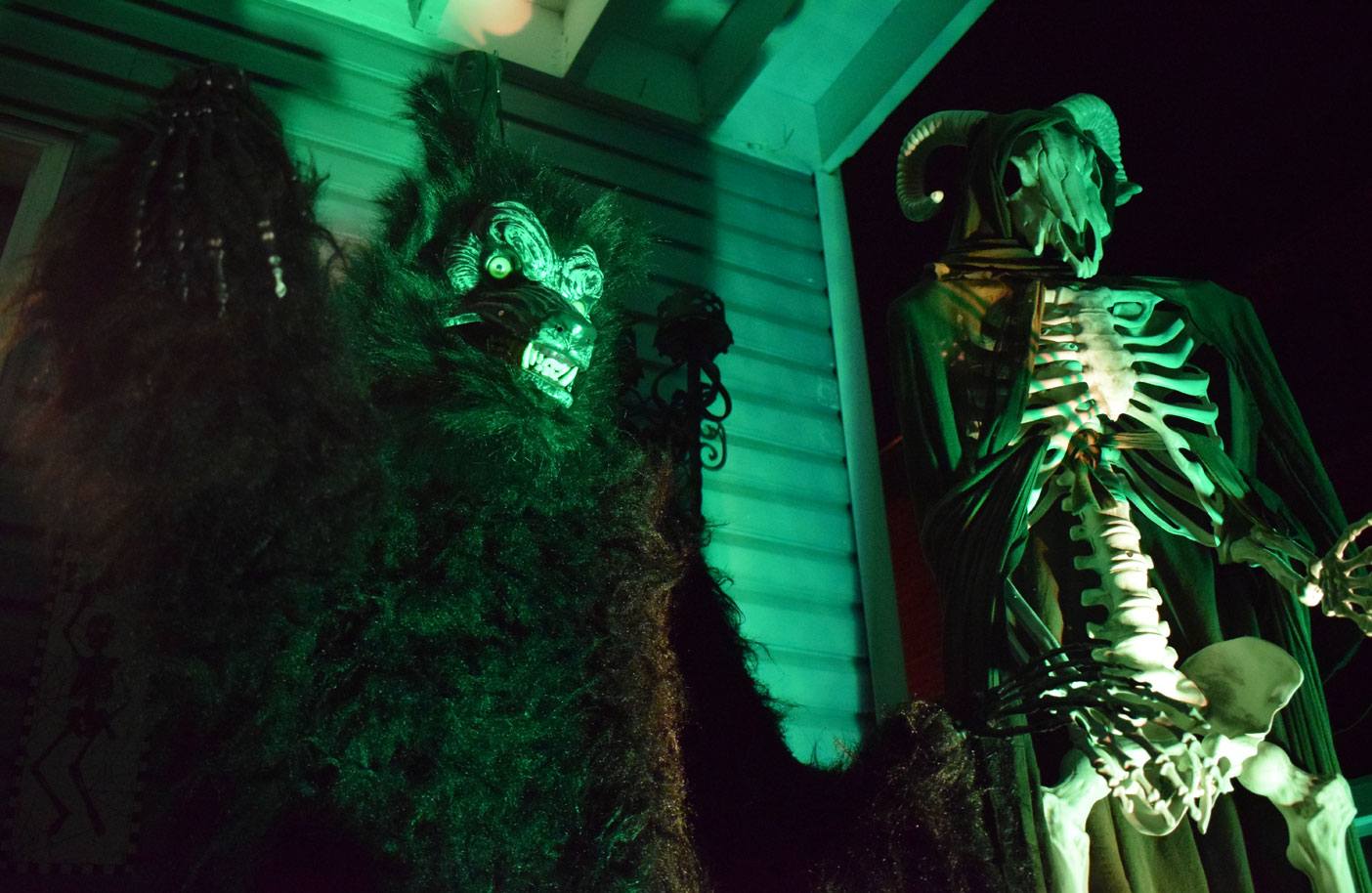 Yes, the werewolf is definitely scary as hell! Tim the Enchanter is just as creepy. 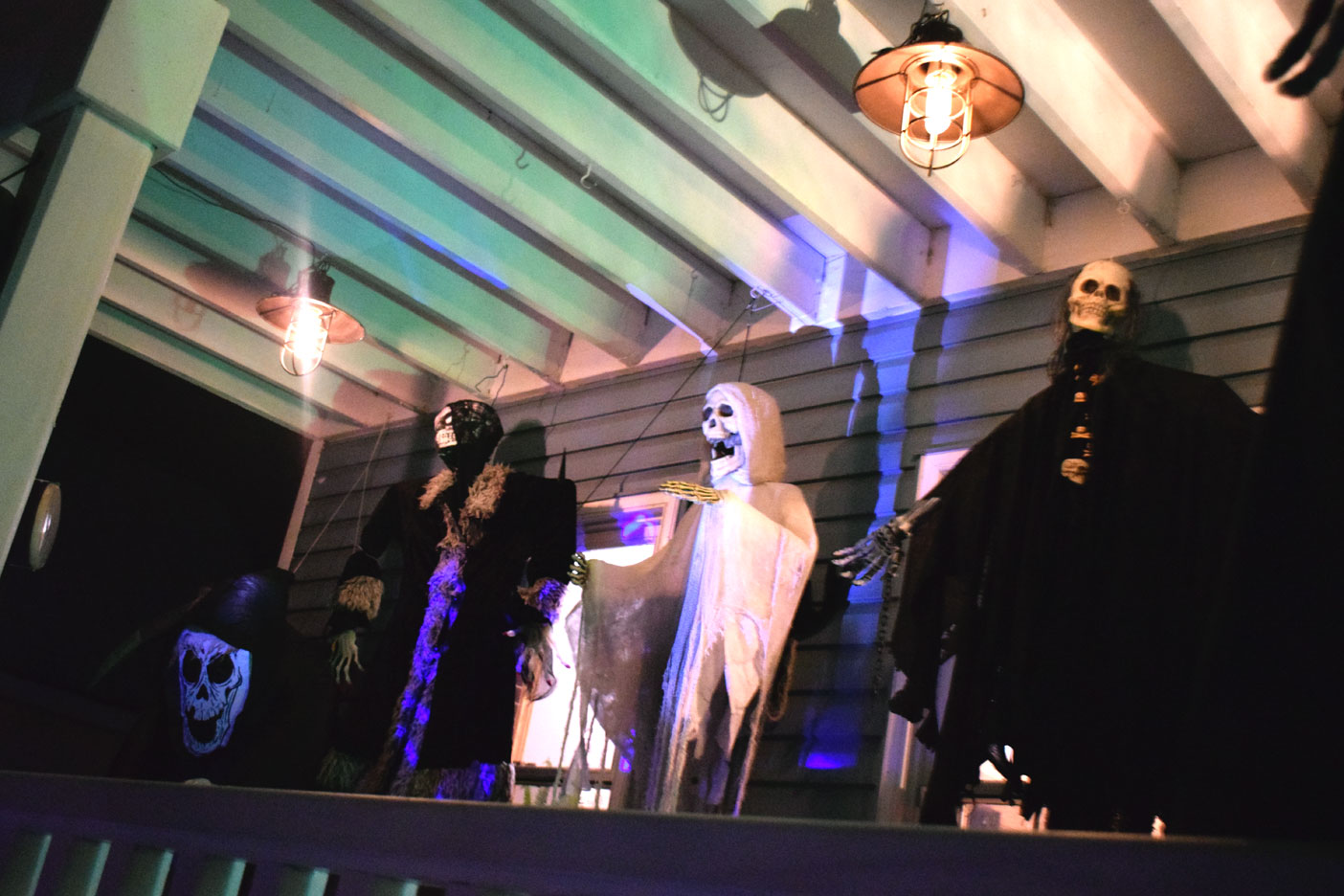 Kids who decide to go to the Sinisters’ Florence Street East home for candy won’t be disappointed. It is truly a sight to see. 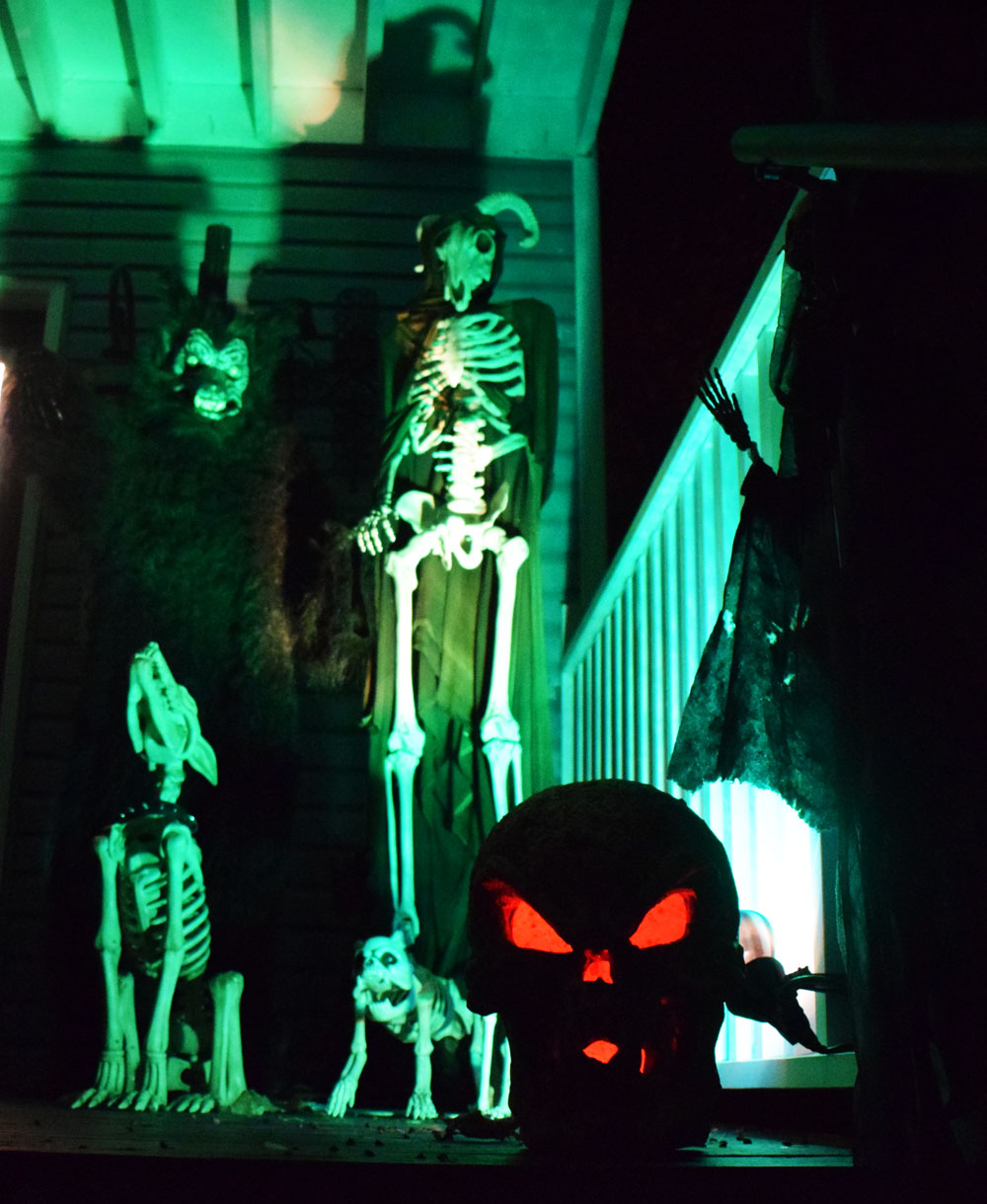 “I might not dress up but I’ll at least put on my witch hat,” says Kandis.

Kandis has spent almost all of her life embracing all things strange and unusual. It started with a puzzle she was given when she was just a little girl. It was of a haunted house complete with vampires, witches and other creepy creatures coming out of the windows. For years she obsessively pieced that puzzle together, over and over and over again. There was just something about it. Those fearsome creatures didn’t scare her at all. Rather the opposite. She was captivated.

And then came music. As a teenager she was introduced to Duran Duran’s first album, which had “a lot of spooky tracks on it.” Next, she discovered The Cure, “the epitome of goth.” And as Kandis got older, her fascination with things typically perceived as being dark seemed to grow as well. By the time she was in her 20s she was into casting spells and enchantments.

“Some of those spells would come to fruition. I learned pretty quickly you have to be very careful what you wish for.”

Kandis is 49 but exudes the playful youthfulness of a girl in her 20s. She doesn’t own a stitch of clothing that isn’t black but that says nothing about who she is, truly and deeply.

This whole Halloween vibe the Sinisters have chosen to embrace is only reflective of their fun-loving, down-to-earth nature and genuine appreciation for the often misunderstood ‘dark side.’ Dr. Seuss couldn’t have said it better: why fit in when you were born to stand out?

“We’re not evil people,” she says. “Just because I dress in black doesn’t mean I’m not happy. I’m probably one of the happiest people you’ll meet.”

The perfect word to describe her and Troy’s love for bones, skulls and antlers and everything in between.