Five kids, three dogs, a cat and a rabbit.

In the glory days of Barbara James’ life, that is what daily life consisted of. It was busy, to say the least, but as hectic as life was living in a teeny-tiny house with a big family, she was perfectly content. After all, she grew up an only child and fulfilled her dream of having a big family.

Raising five kids was hard work but it was a job she was cut out for.

“I was meant to be a mother,” says the 73-year-old, point blank. She’s sincere when she adds, “I never liked working, anyway.”

She’s naturally the caring type. In fact, her empathy towards others is what recently earned her Muskoka Landing’s Making a Difference award. When she was told she was this year’s recipient, she was completely taken by surprise. It was a real honour, she says. She even cried.

I couldn’t believe it. I’ve never won anything before. It was like, ‘Wow. This is really awesome.’

Barb is sweet and generous and follows a motto that you should say you can, even if you can’t. And if you can’t, at least you tried.

She believes no one should die alone, but a sad reality is that it happens. Barb has taken it upon herself to sit at the bedside of residents who are facing the end of their life without friends or family by their side. It breaks her heart. She does what she can so they aren’t alone. She says she’s befriended a woman in the nursing home who can’t say too much and easily becomes agitated. But Barb thinks she is lovely. Sometimes the lady tells Barb she loves her. She even cracked up hysterically when Barb made a video of her on her iPad.

“I would like to think that I’m compassionate,” says Barb. And clearly she is.

Barb is witty, quick with comebacks and loves to laugh. She has the kind of hearty chuckle that is infectious. She’s genuine; the real deal. She used to care what people thought about her, but being comfortable enough to speak her mind and not care what others think was something that only happened as she got older. It also makes her the perfect fit as president of the residents’ council.

It’s not really difficult. I just keep an eye on what’s going on around here. If someone is unhappy about something then I report it. I like advocating for the other residents.

Barb has called Muskoka Landing home since 2013. She shares a room with her husband, Michael. It’s an extension of a love story that began when Barb was just 15. She met him when she was walking down the street with one of her best friends. They both wrote their names and phone numbers on his dirty car. He ended up calling Barb. It wasn’t love at first sight for her, but for him it totally was. She started to realize they had a lot in common and soon they were spending every weekend together. A year later, they got engaged. A year after that they were married. Nine months and nine days later Barb had her first child. There were a lot of ups and downs but more good times than bad. They’ve been together for almost 56 years. They have separate beds in the room they share but they still hold hands any chance they can get. 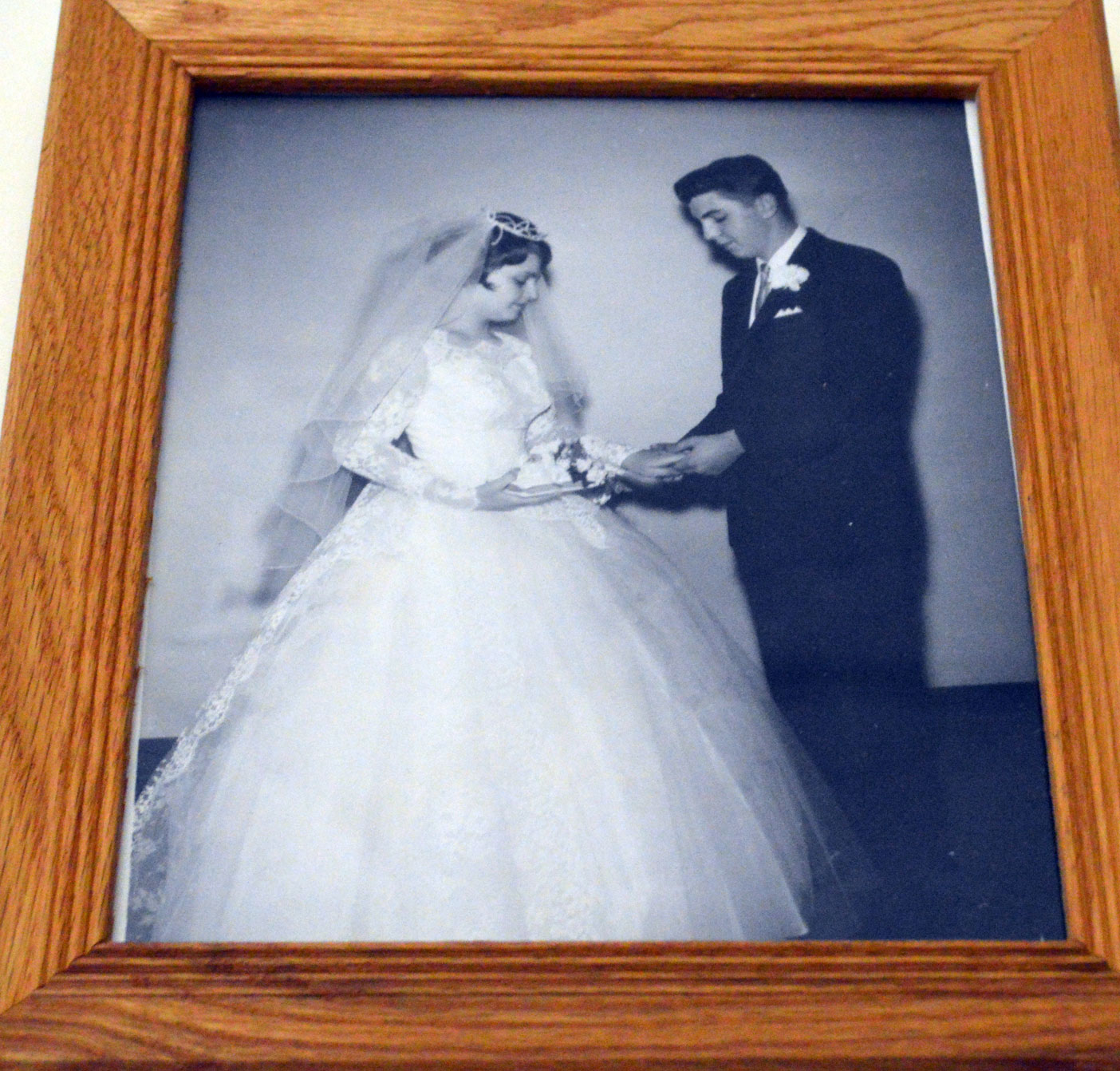 They were just teenagers when they were married but stood the test of time with their vows to each other. 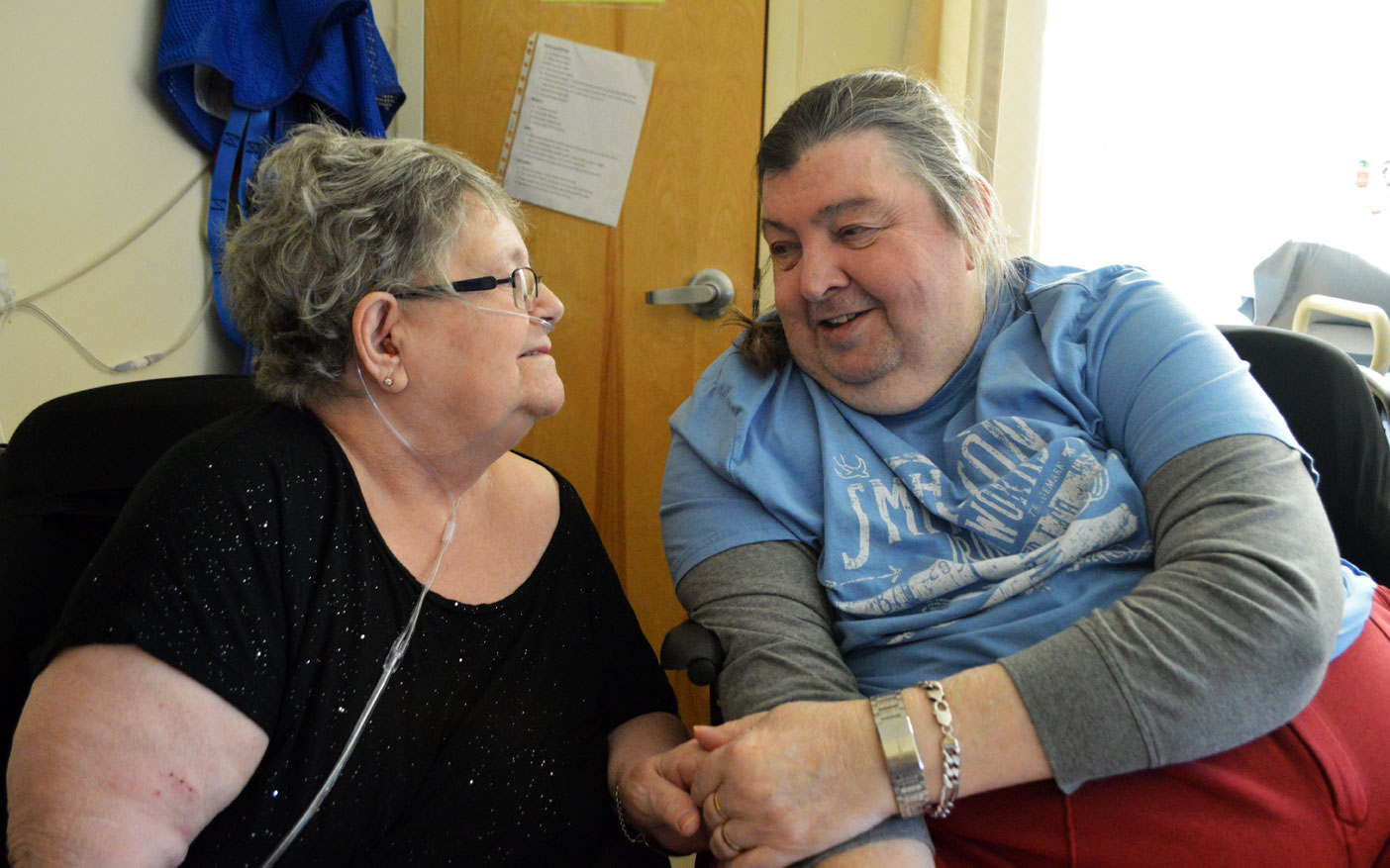 Well over five decades together, and they still have that look of love.

“When I first got here we had separate rooms next door to each other. It was kind of nice because I didn’t have to do anything for him. But we had these phones with intercoms and we would be buzzing each other back and forth. Then I got cell phone and put $100 on it and ran out of money two days later. Michael had been calling me six or seven times a day so we decided we would pay the $50 and get a regular phone.”

Although confined to a wheelchair due her arthritis, Barb likes to keep busy. She is a master at crocheting, a skill passed on to her from her grandmother. In her room at Muskoka Landing, a cupboard is filled with the most brightly coloured wool. She has a thing for colour. And when it comes to her handmade creations, her skill level speaks for itself. She can make just about anything. She gets ideas from searching Pinterest and browsing online on her trusty iPad.

“Everyone gets a laugh out of me because I sleep with my iPad. If I can’t sleep, I’ll be on it for two or three hours until I’m tired.”

Her one-of-a-kind shark blanket is nothing short of a masterpiece. She makes unique upside down dolls any kid would want to play with. Her Bunny Loveys are adorable and she’s made several camera lens covers that are perfect for getting a kid to look at the camera. In her collection of goods is the cutest, softest crocheted jellyfish. Being crafty is always something Barb has enjoyed. And now that she lives in a long-term care home it’s become more than a way to pass time. It’s an outlet for her creative mind. In the past, she generously donated baby hats to a London, Ontario hospital as part an initiative to remind parents not to shake their babies. She also donated a beautiful Afghan she made to go to a raffle for the Alzheimer’s Society of Canada. 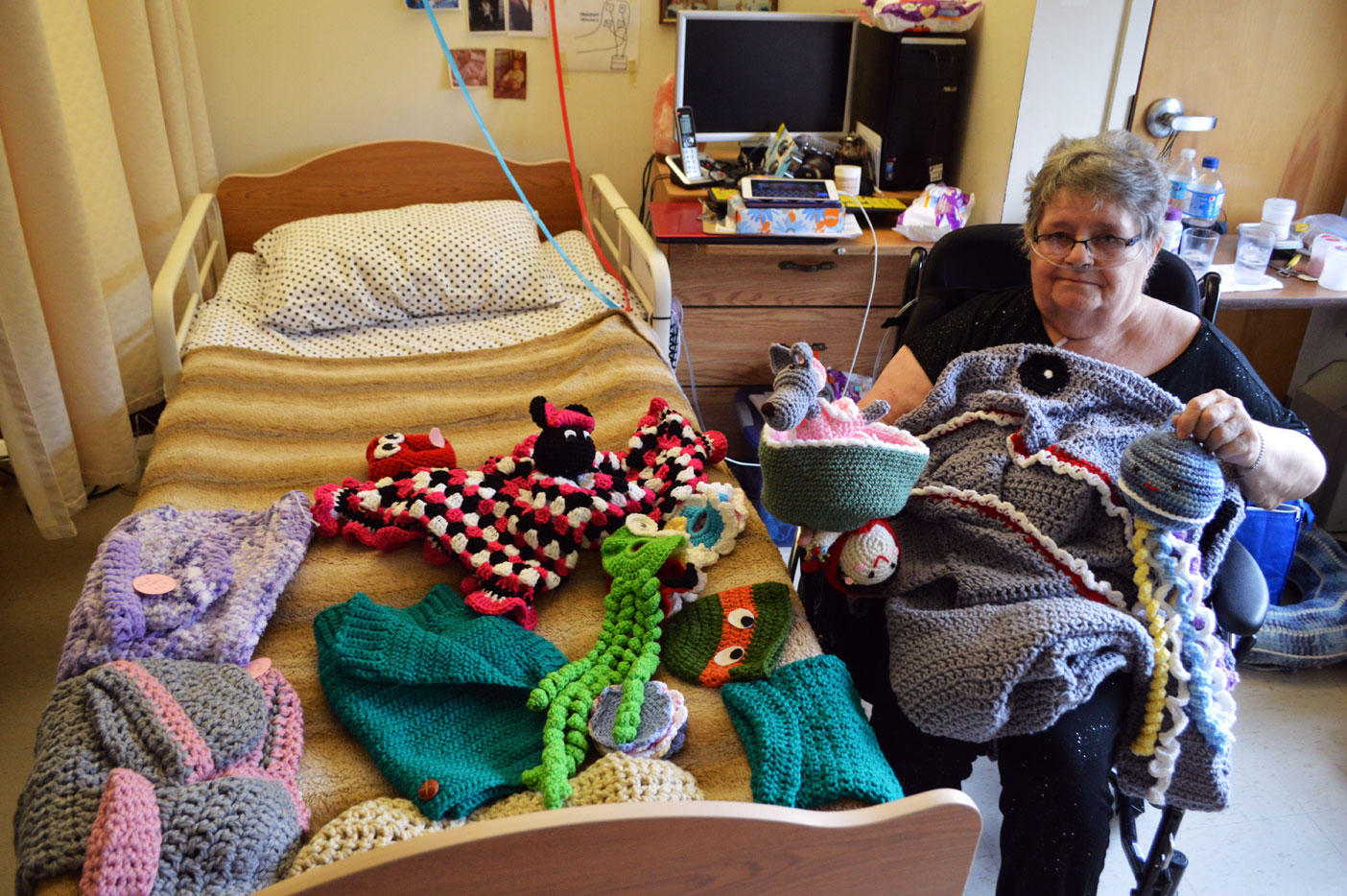 Crocheting is more than a way to pass idle time, it’s an expression of Barb’s creative mind. 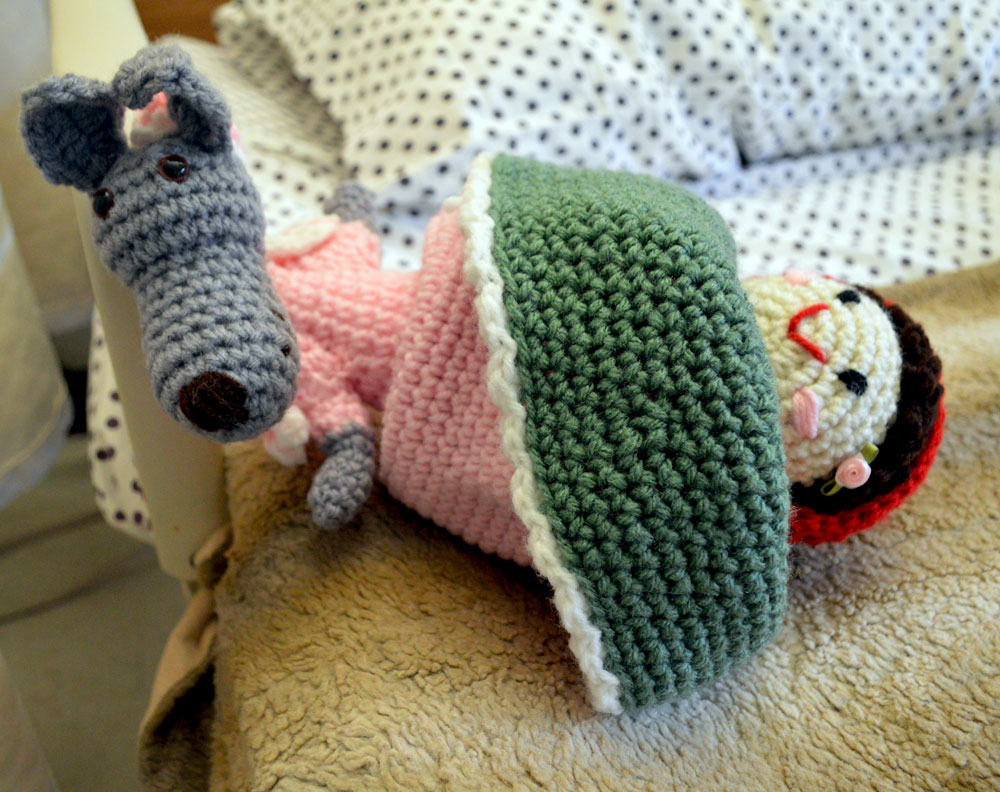 A lot of love goes into making her upsidedown dolls. She made a Cinderella doll as well that when turned upside down became a cute princess. 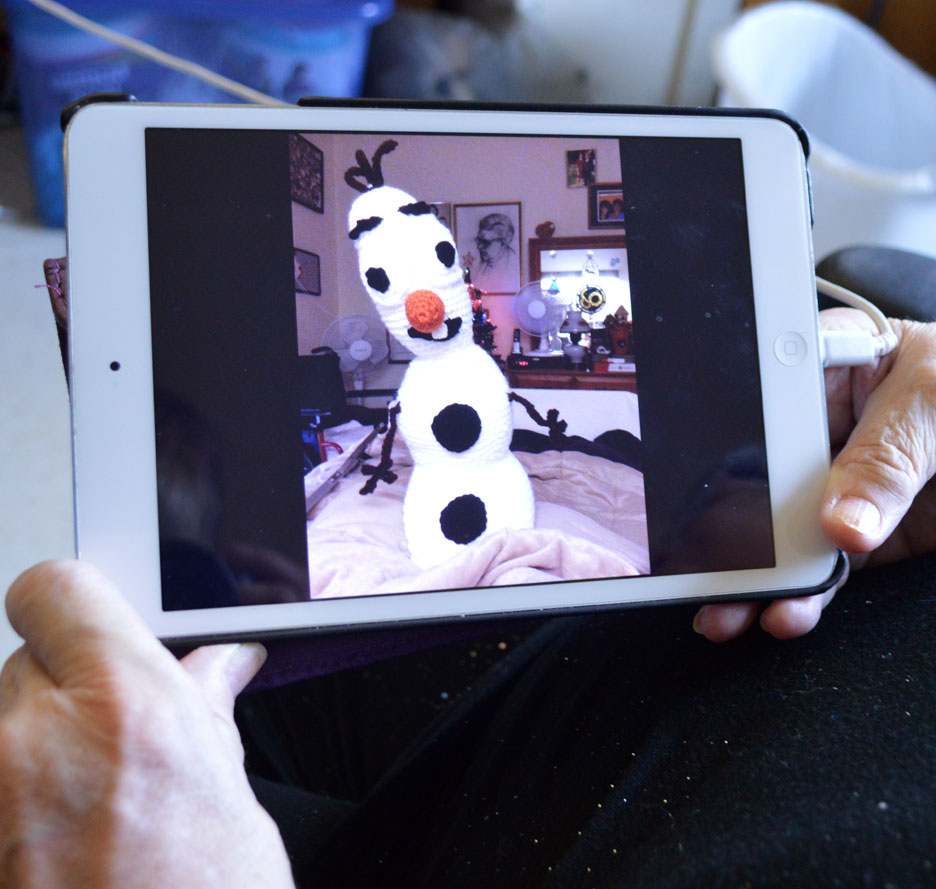 Her crocheted Olaf was a huge hit at Muskoka Landing. 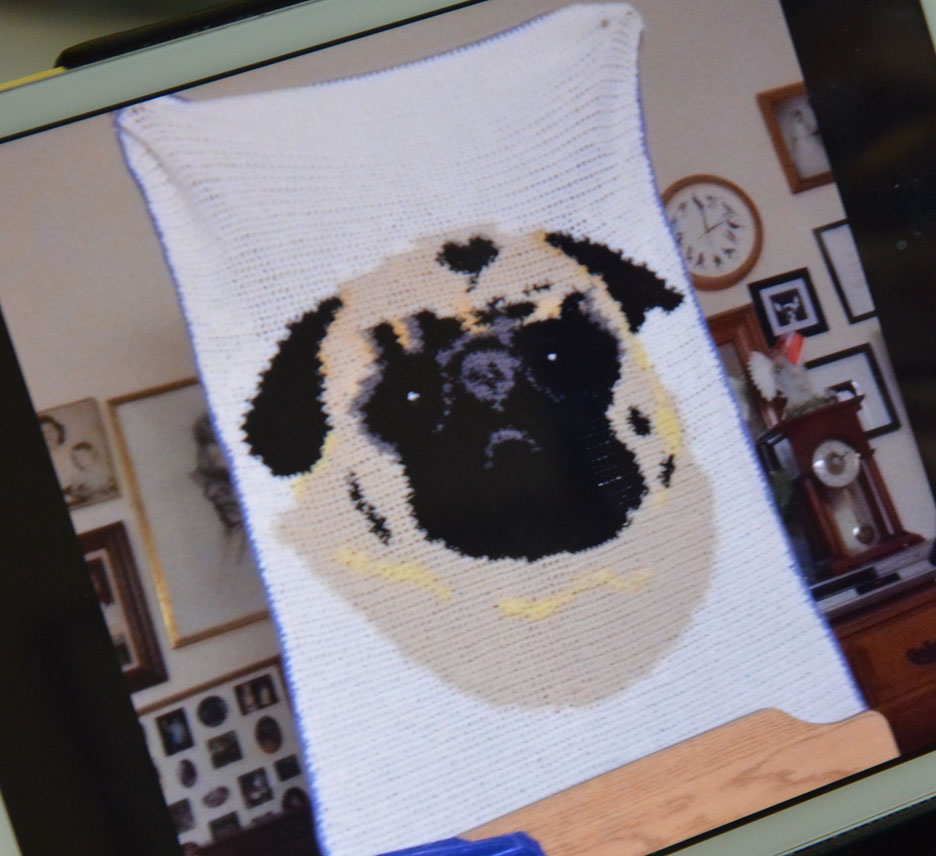 There isn’t anything Barb will shy away from making, including our beloved pets. 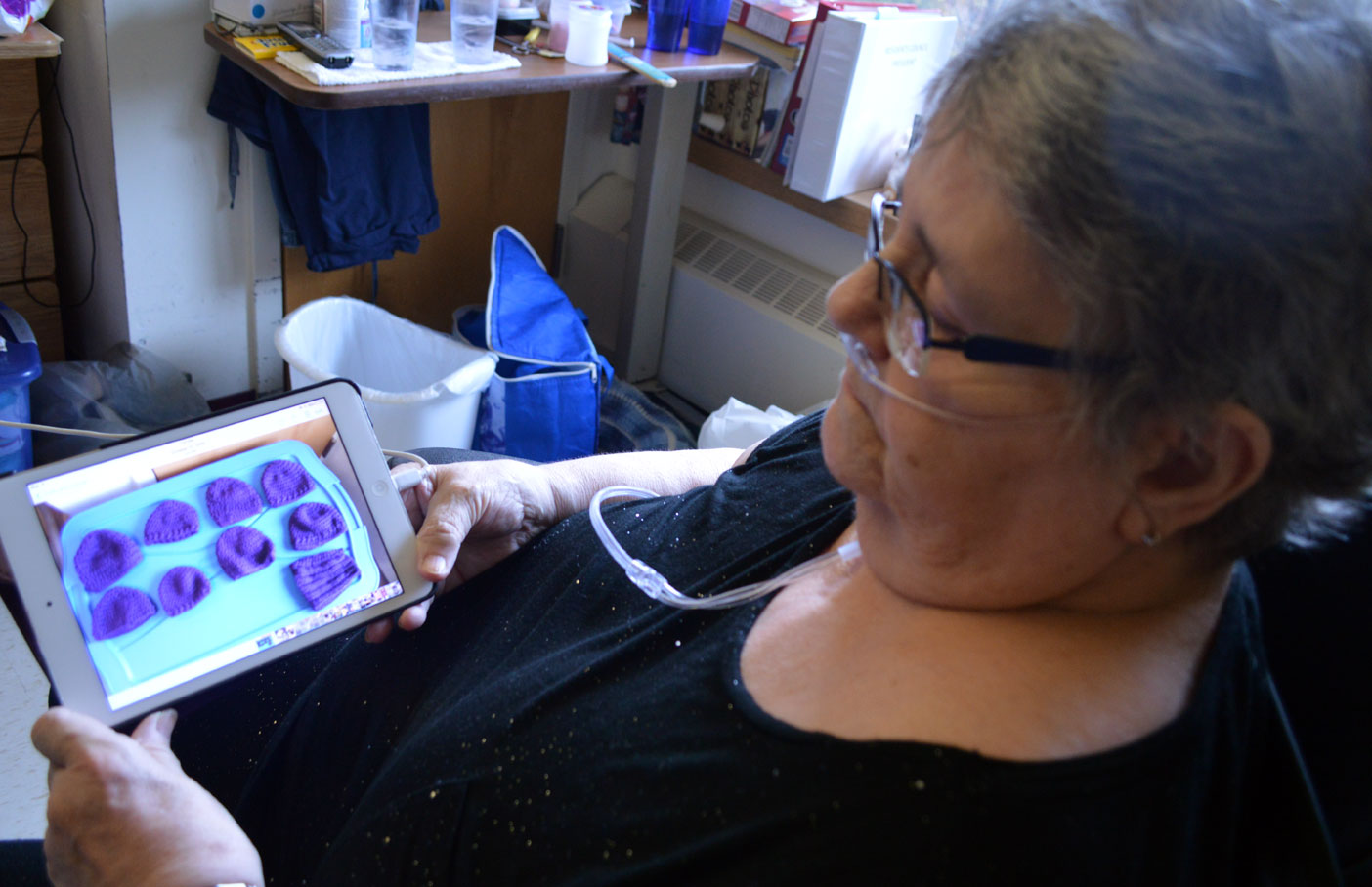 She reflects on the good old days a lot. Years ago, when she and her husband lived in Emsdale, they made lamps out of wood and stone and cleverly sold “cow seeds,” which were Lima beans with cow prints painted on them. They came with instructions that informed buyers to plant the seeds rightsideup because cows don’t grow upside down. People got such a kick out of those and bought into the humour of it.

“You know, we sold a lot of those lamps and I never kept one for myself,” she says with a laugh. “I wish I did.”