You are here: Home / Community / Nature man recalls life in the big open

Harry Brown’s life has been one enriched by the great outdoors.

He’s slept outside in a shelter he made in -40C weather, sipped pine needle tea and knows all about wild edible plants. Brown tracked the local weather for decades, tapped 200 maple trees and made 30 gallons of maple syrup annually. He used to facilitate a nature program and, for the admiration of all creatures, he learned taxidermy. He loves to give back to the community through volunteer work. The list goes on and on.

Brown has always used Mother Earth as a playground. He knows that these days people, especially children, are plugged into the world of technology and don’t get out to play as often as they should. But when he was raising his kids that’s what his family did. Quality family time was usually spent outside.

“I grew up with a love for the outdoors and I wanted to give them a chance to have respect for the outdoors… so they would be able to do as much as they can with that in their own life. I think being outside teaches kids a lot of different things.”

When I called Brown to see if he would be interested in being profiled, I wasn’t sure he remembered me. I’ve known him for a long time. He stuffed and mounted my then 9-year-old brother’s 22-pound pike pulled from Lake Vernon. I tell Brown my brother didn’t swim in the lake for many years after that catch. And then he laughs a little. Good, I think to myself. A successful icebreaker.

I knew he was the kind of guy who had a deep appreciation for nature. Back in my early days of reporting I did a story on him being Huntsville’s own weather man. For decades, he tracked the local weather filling countless notebooks with a daily recording of the temperature, highs and lows, and measured the amount of precipitation whether that was snow or rain. It was just something he did as a pastime. He’s given it up now, though. About two years ago, he moved from his Ravenscliffe Road home where thousands of memories were built with his wife, who passed away several years ago, and their two children. He lives in an apartment in town now. It’s a bit easier for him because he’s getting older. 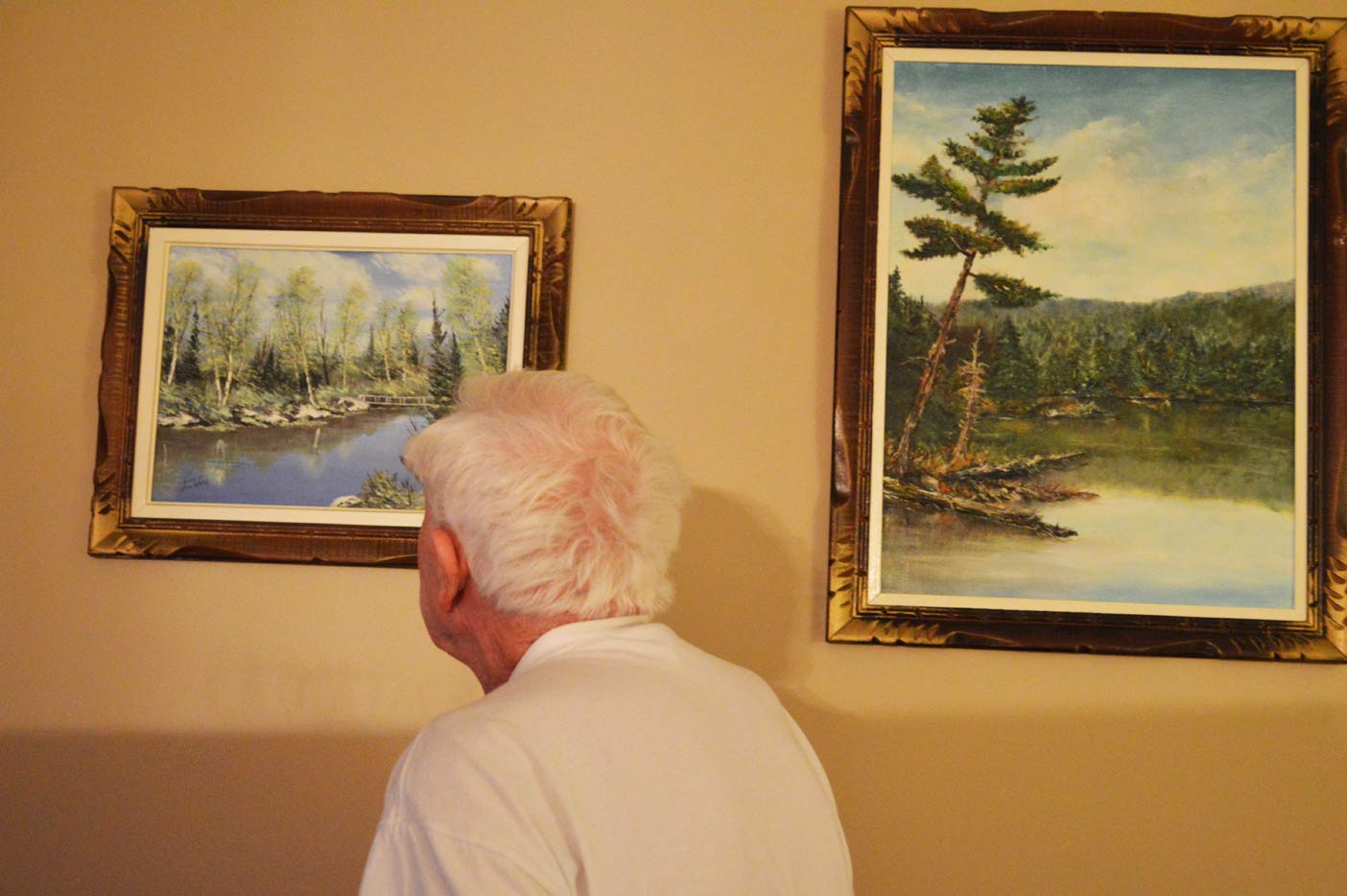 The paintings in his town apartment are vivid and reflect the beauty of nature.

“You have to listen to what your body is telling you,” he says.

Although he’s in his early 80s, Brown is still fairly active in the community. He might not get outside as often as he used to, but he still finds time to appreciate simple things like bird watching. He even measured the first snowfall on a picnic table outside of his apartment.

I think it’s really too small of an area to make exact predictions for what kind of winter or summer it will be. We’re in an area where the conditions can change drastically in a short period of time.

He came to Huntsville from Ottawa in the early 1970s. It’s no wonder he was drawn to the area. It was a giant playground for him. Even prior to him relocating, Brown spent many summers with his wife at Camp Tawingo. He was a local elementary school teacher and in the summer he ran a unique outdoor program at the camp, mostly for youth. He led nature excursions and wildness walks from SWAMP Lodge (an acronym for Stars, Weather, Animals, Minerals and Plants.) He offered stargazing opportunities, bird watching, a weather station was set up for kids to record the weather and make a forecast for each day and variety of outdoor programs.

One of the most popular activities he did was called the Dumb Blind Walk, which always occurred at night. Upon leaving the lodge, no one was allowed to talk and everyone was required to walk as far behind the person in front of them but still keep up with the line. In one particular instance, and luckily it was with an adult group, Brown was leading the way when he suddenly stopped.

“Everyone had to keep their ears open and figure out what they were being shown. That night it happened to be a mother skunk and three or four babies and they walked right in between people. I’m pretty sure everyone held their breath. If it had been kids I’m sure we would have all been be sprayed.”

Brown even took up taxidermy as a way to preserve some of the wildlife he or his students would often find dead at the side of a road or in the bush.

“It was always a shame when we couldn’t do something with it,” he says. “I got a book and learned how to do it. That’s how I got started. We had a fair collection of stuffed animals in my classroom.”

Eventually taxidermy became a part-time business for him and he’s stuffed and mounted everything from a baby owl and birds, to fish, and even a snapping turtle.

Brown has been active in the bird-watching community for many years. He still gets a thrill when he sees a majestic cardinal perched on his birdfeeder. The other day, he spotted the last of a “big, fat male robin.” A sure sign winter is upon us.

In his opinion, Mother Nature has been extremely generous with the mild weather we’ve been experiencing. He’s sticking with what the experts are predicting. It just might be a mild winter after all.

“It’s really hard to say, though, because the weather does go in cycles. It can be really cold winter, and then much milder but more snow the next. I think it’s really too small of an area to make exact predictions for what kind of winter or summer it will be. We’re in an area where the conditions can change drastically in a short period of time.”

Brown helped build a beautiful flower garden at Ravenscliffe’s St. John’s Anglican Church. When it came time for a major roof repair, he moved the garden to the entrance into Huntsville Hospital. To this day, he still maintains it.

He also porters at the hospital, where he helps patients if they need to be transferred to a different floor or wing and takes blood samples down to the lab.

“Basically I’m at their beck and call to do whatever needs to be done. It’s just something I don’t mind doing.”

Brown has also been a helping hand for Huntsville’s Meals on Wheels program. He used to be a driver and his wife was the runner. But now that he’s older, he’s become a spare. He says it’s something he’ll continue to do for as long as he can.

“Volunteering is a way to give back. Without volunteers program wouldn’t be able to continue operating. There’s a certain satisfaction in helping other people. And that’s why I keep doing it.”

As we talk for over a half an hour something becomes very clear to me. Everything he did with his life pretty much pertained to being outside. He’s not spending as much time outside as he used to, but he can still admire the birds from his apartment window.