Katharine Kristiansen is always eager to help out and she is really excited to explain the ways she helps people.

Through her time with People First she has had the opportunity to travel within the province and to meet many different people. She has been asked to participate on some boards and committees and she is currently on the People First Board of Ontario. Katherine’s work with People First has made her more confident and she is better able to speak in front of groups. She has also learned how to be a better advocate for herself.

Katharine has many interests and is very involved in the community. She has four cats, she is a writer, she enjoys painting and she has many crafting hobbies.  Katharine is also in many women’s groups and church groups in the Huntsville area.

For those who may not be familiar with the People First organization, it is an advocacy group for people with disabilities. They put people first. It started in British Columbia in 1974 and then spread across the country. The local People First chapter has approximately eight members and was founded in 2006.

People First advocates both for individuals and groups with disabilities in Huntsville.  Individual members of the community with disabilities can bring specific issues to the People First table, and then People First will figure out how to best help them. This might mean sending a letter or it might mean working with different groups like Legal Aid, Housing, the Health Unit, etc. to help solve their problem.

If People First learns about problems with things like accessibility, they talk with people at the local level of government to help resolve the issue. The Town of Huntsville has asked for the input of People First in projects such as the accessibility working group that worked on the transit study. Their work can take a lot of time and involve a lot of follow-up.

Through their involvement in the transit study, People First advocated for a new wheelchair-accessible transit bus that would work with different types of wheelchairs.

People First also manages a community garden in Huntsville as a way to give back to the community. Currently, they are writing letters and working to help with keeping  the hospital open.

There are a couple of ways people in Huntsville can support People First. If interested in helping out on an ongoing basis, they could become a board member. The next meeting will be held at the Huntsville library on July 8 from 10:30 a.m.-12:00 p.m. They can also donate baked goods for their annual bake sale and BBQ that will be held on July 6 from 8:00 a.m.-1:00 p.m. The proceeds of this sale pay for the room that they use at the library for meetings and for things like flyers. 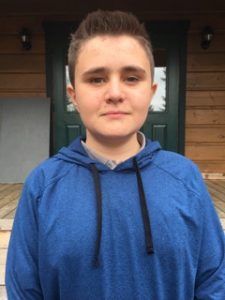 Jack Rast is twelve years old. He is currently a Tawingo College student in grade 7. Jack was born in Johannesburg, South Africa and moved to Huntsville just before he turned two.