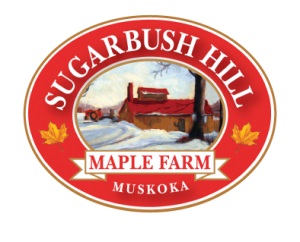 After travelling around the world as flight attendants for 40 years, Tom Stehr and his wife Pauline decided to fulfill their lifelong dream of running their own maple farm. Pauline’s family had owned many sugar shacks so the pair spent many springs amongst the maple trees helping with production.

When they retired in 2009, they bought 100 acres of land between Huntsville and Port Sydney and opened Sugarbush Hill Maple Farm.

Sadly, in 2016 Pauline passed away from cancer, however Stehr and his dog Boomer still live on and run the farm full time. He also has a team working with him to help with boiling sap, creating maple products from the syrup, and running the store front.

Stehr says he is one of the only sugarmakers in all of Canada to live in his sugar shack as many now have a separate building or property for production. He wouldn’t have it any other way.

Sugarbush Hill Maple Farm has 3,200 taps and uses the modern technique of tubing, a more efficient alternative to buckets for collecting sap.

Stehr runs tours from March through October and hosts visitors from all over the world including Asia, Europe, and South America. The farm’s unique tour is 90 minutes long and includes an in-depth history of how maple syrup production started and, of course, delicious samples.

Stehr shares many interesting facts with his visitors including that it takes 40 litres of sap to make just one litre of syrup, and that the first documentation of maple syrup was in 1604.

For the past four years Sugarbush Hill has hosted a Maple Weekend on the first weekend of April—this year it falls on April 6 and 7. The farm is also part of the annual Muskoka Maple Trail, which runs from March 8 to April 26, and the Muskoka Maple Festival which takes place on April 27 in downtown Huntsville.

New for 2019, Stehr is very excited to offer Maple Creemees—maple-flavoured soft-serve ice cream. After travelling to the U.S. to visit other maple farms, he discovered how delicious and popular this treat was so he decided to be the first farm to offer it in Ontario.

Something else that differentiates Stehr’s farm from others is his massive collection of maple-related antiques.

He says he has the second-largest collection of maple antiques in all of Ontario, and his dream is to one day preserve the history of maple and open his own museum on the Sugarbush Hill property.

“It never feels like work here,” said Stehr. “Everyone is always so happy to visit the farm and l love leading the tour and having everyone learn about maple.” He also joked that his clientele is much different and much happier than when he worked on planes, making his job much easier.

Sugarbush Hill Maple Farm is open Tuesday through Saturday from 10-4 and Sunday from 12-4. The farm is closed on Mondays.