I’ve discovered a bit of a theme with writing these weekly profiles. It’s generally the people who are behind the scenes doing all sorts of amazing, selfless things for others who are the most hesitant to want to talk. It’s like they don’t want to toot their own horn. But that’s okay because I want to do that for them.

And in the spirit of Christmas I want to bring long-time Salvation Army volunteer Doug Dalrymple into the spotlight. Last week, I spoke briefly to his wife, Sharon, about the possibility of writing a profile on him to highlight all the wonderful things he does for local families in need at this time every year. So, when I arrived at the Salvation Army Church Saturday morning for photos of Dalrymple I wasn’t sure why he was still sitting out in his van. Sharon hadn’t told him yet. When I went outside to introduce myself and tell him what I was after, I surprised him with my proposal. At first, he had to think about it. He wasn’t entirely certain he wanted the recognition. After a few minutes, though, he graciously accepted. He just wanted to make sure when I wrote my piece that I would be sure to include the fact that it takes many helping hands to carry out the work that the Salvation Army does.

Everyone knows that what makes the Salvation Army such a vibrant force in the community is a bevy of dedicated volunteers and a lot of willingness on their part. After all, it would be near impossible for one person to touch the lives of the hundreds of local families who are currently in need. Especially when it comes to making Christmas wishes comes true.

Dalrymple has been a big supporter of the Salvation Army for most of his life. He started on kettles when he was 13 in Detroit, Michigan, where he was born. When he was 16, and living Windsor, he became involved in food collection and helped pack the Christmas hampers every year. As time went on, so did his commitment.

“I needed to fill a void in my life,” he says. “I came from a broken home. I believed this was a way to open myself up.”

For more than 30 years, he has played a vital role in the annual toy drive. Even with his health not at its best, he’s still making a significant contribution as a volunteer. And more so these days. Because it’s Christmastime.

This is a wonderful community of people that give from their hearts.Doug Dalrymple

What Dalrymple likes most about this jolly time of year is making children happy. Seeing a smile on their face. Knowing that the good will services of the Salvation Army has helped make the season bright for a child who needs it the most. To him, Christmas is all about the kids.

“I believe in making it special for the children,” says the 66-year-old, who, alongside his wife and many other selfless volunteers put forth an extra effort to ensure a successful toy drive year after year. “I used to personally deliver a parcel to a family, which was usually to a single mother with four kids. I always found the mothers were so appreciative of the Salvation Army. I see a lot more of that need nowadays.”

This past Saturday, after the Stuff-A-Cruiser event wrapped up, the sorting and storage room at the Salvation Army Church on Mary Street was literally wall-to-wall and nearly floor to ceiling-high with donated toys. 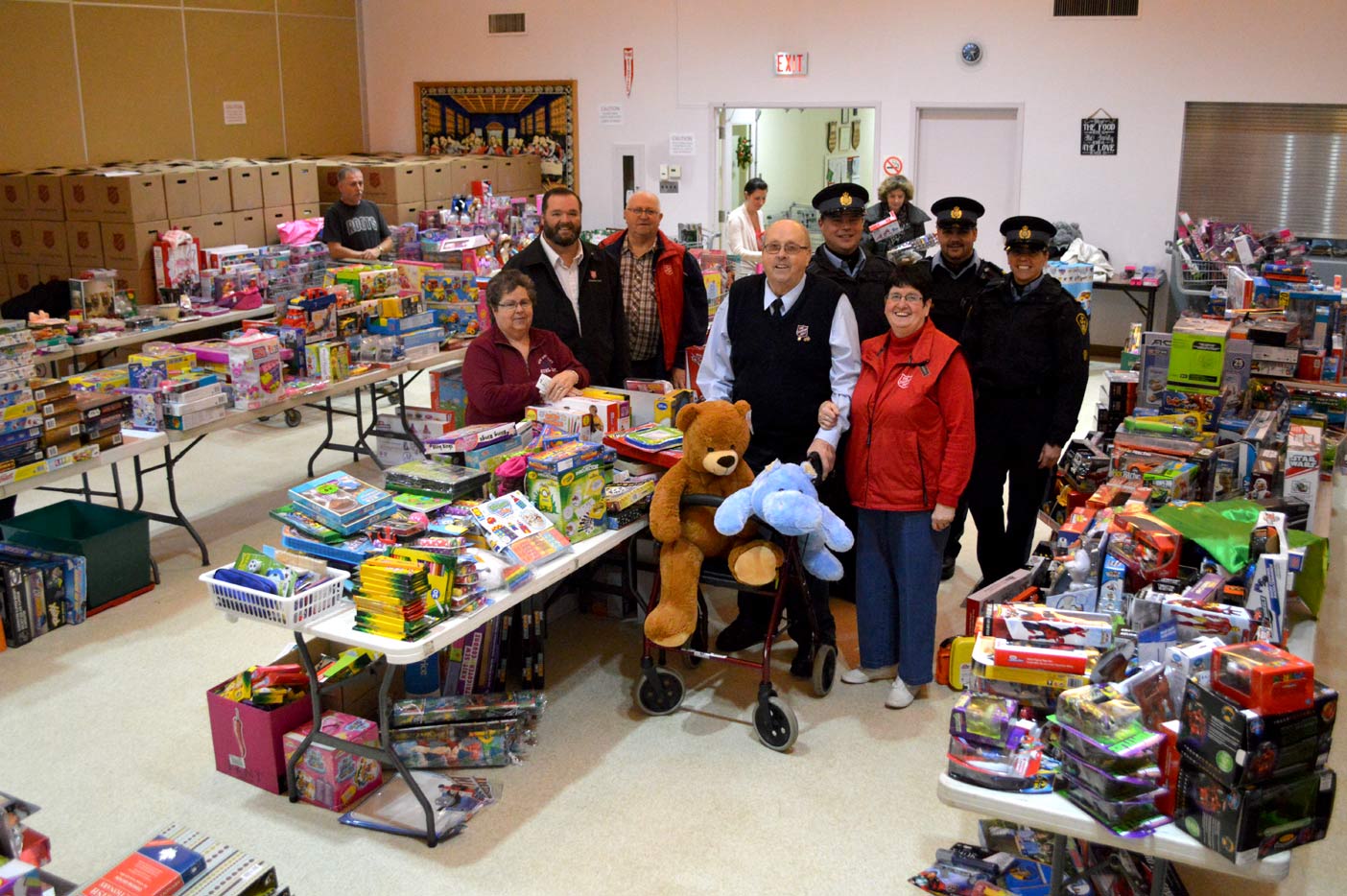 The Salvation Army has received more donations for toys and food than in previous years, a sure sign of an extremely generous community. 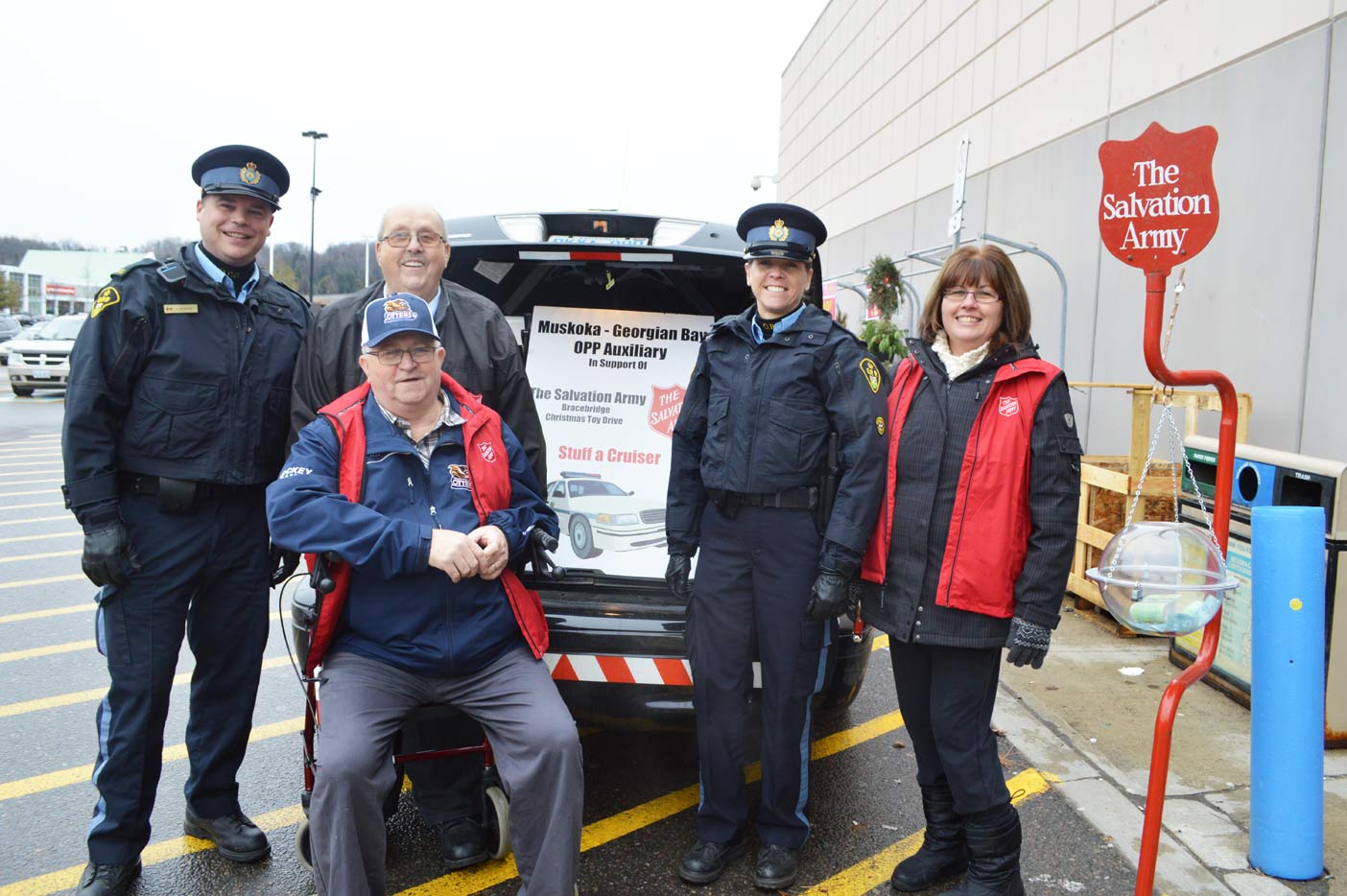 Dalrymple was out and about with Huntsville OPP auxiliary sargeant Jamie McBride and Tammy Whitehead and fellow Salvation Army volunteers Bill Patey and Cathy Gibson on Saturday collecting generously donated toys for the Stuff-A-Cruiser event.

Dalrymple added that the food drive is also a huge component of making Christmas extra merry for so many local families. Roughly 250 volunteers pitched in to collect over 28 tonnes of food this year with the Project Porchlight initiative.

“People are still bringing in toys, food, and cash donations into the church,” he says.

As usual, Dalrymple has been giving as much of his time as possible to ensure there’s a present for every girl and boy who might not have one otherwise.

“There’s hundreds of families who don’t have the means to provide for their families,” says Dalrymple. “People can buy a present, but we want to give them a little extra to get through the year. That’s what Christmas is about.”

This year, he says, the need is even greater. And the community has undoubtedly stepped up. There has been more donations of toys, food and money.

“Because of the people who see and hear there’s a need. They’re willing to give. The Salvation Army has a reputation. When the people give all this stuff, we have to prove to them we’re good stewards of everything and that what we’re giving is going to the public in need. This is a wonderful community of people that give from their hearts.”

He acknowledges that if it wasn’t for the many helping hands of hundreds of local volunteers, making Christmas wishes come true wouldn’t be possible.

He gives a shout-out to Salvation Army majors Darren and Suzanne Wiseman, calling them “great pastors of the Salvation Army” and to people like Sharron Harwood “one of the finest workers in the food bank.” His wife, who is the office administrator is simply “remarkable” with her support to him and the toy drive.

“One statement I always say at Christmas time is remember to keep the true Christmas spirit alive within your hearts and to keep ‘Christ’ in Christmas. I do what I do because I love the kids… and the families, really. I want to help make it easier on mom and dad.”