Susan Gammage can’t stop smiling. She can light up a room. It’s an ear-to-ear grin and most of the time she can’t even help it. It escapes out of nowhere and it’s the greatest piece of evidence that she’s truly happy. At long last.

Susan is surprisingly open about her horrific past, and that is exactly what makes her an inspiring and admirable person. She’ll talk about anything. Aside from having an infectious grin, she happens to be a great conversationalist as well.

“Cult,” says Susan when I ask her to give me one word that comes to her mind when she thinks of her childhood. It’s dead silence for a few seconds. I’m not sure what to say. Then I tell her that’s definitely not a typical answer when you ask someone to reflect on their childhood. Then she sighs before saying, “It was a horrific thing. I don’t even really connect with my childhood.”

The circumstances surrounding her youth were tragic. She grew up in a small town in Alberta. Both of her parents were heavily involved in a cult. Susan was subjected to ritualistic abuse – physical, sexual and emotional. That was a daily aspect of her life. When her father raped her and she became pregnant with his child at around 13, a backwoods abortion was the solution. I didn’t think I needed her to expand on what exactly that meant because I had a pretty good idea that it entailed heinous measures. She told me about how she watched her father murder her brother and how she longed to run away but couldn’t out of fear that they would find her. She endured things no child should ever have to go through.

The first 17 years of my life were absolute hell but from 18 to 55 it was worse. I was continuing to abuse myself with all these things I was putting in my hamster wheels. Flashbacks, anger, bitterness… It was eating away at me. I had to learn how to forgive. There’s been so much healing since then and forgiveness of my parents.

She tells me they have both passed away. I tell her I’m not so sure I would be so forgiving. “I have this sense that I’m free now. I’m not going to be hurt anymore. I’m more interested in living in the present and trying to do some good in the world.” 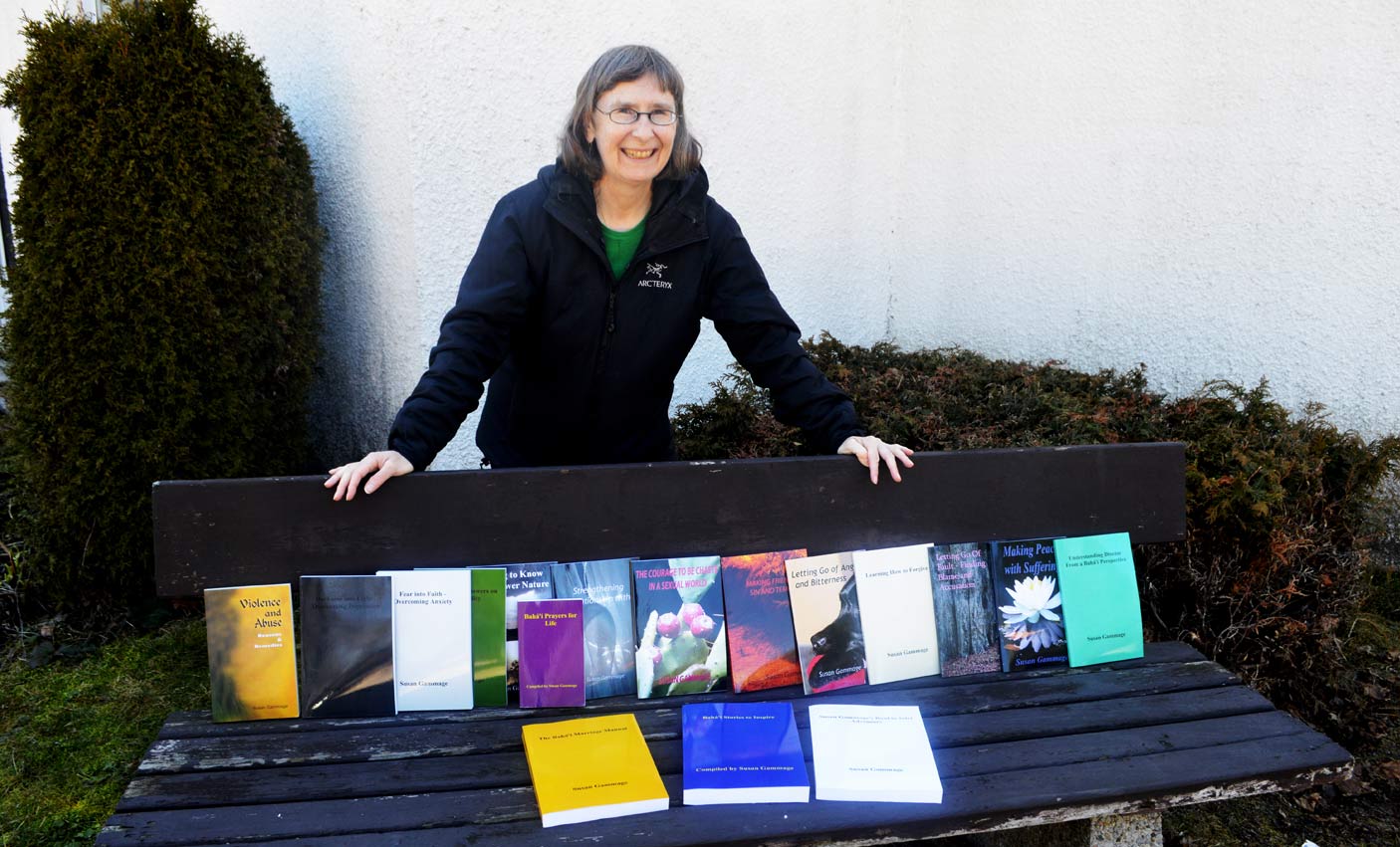 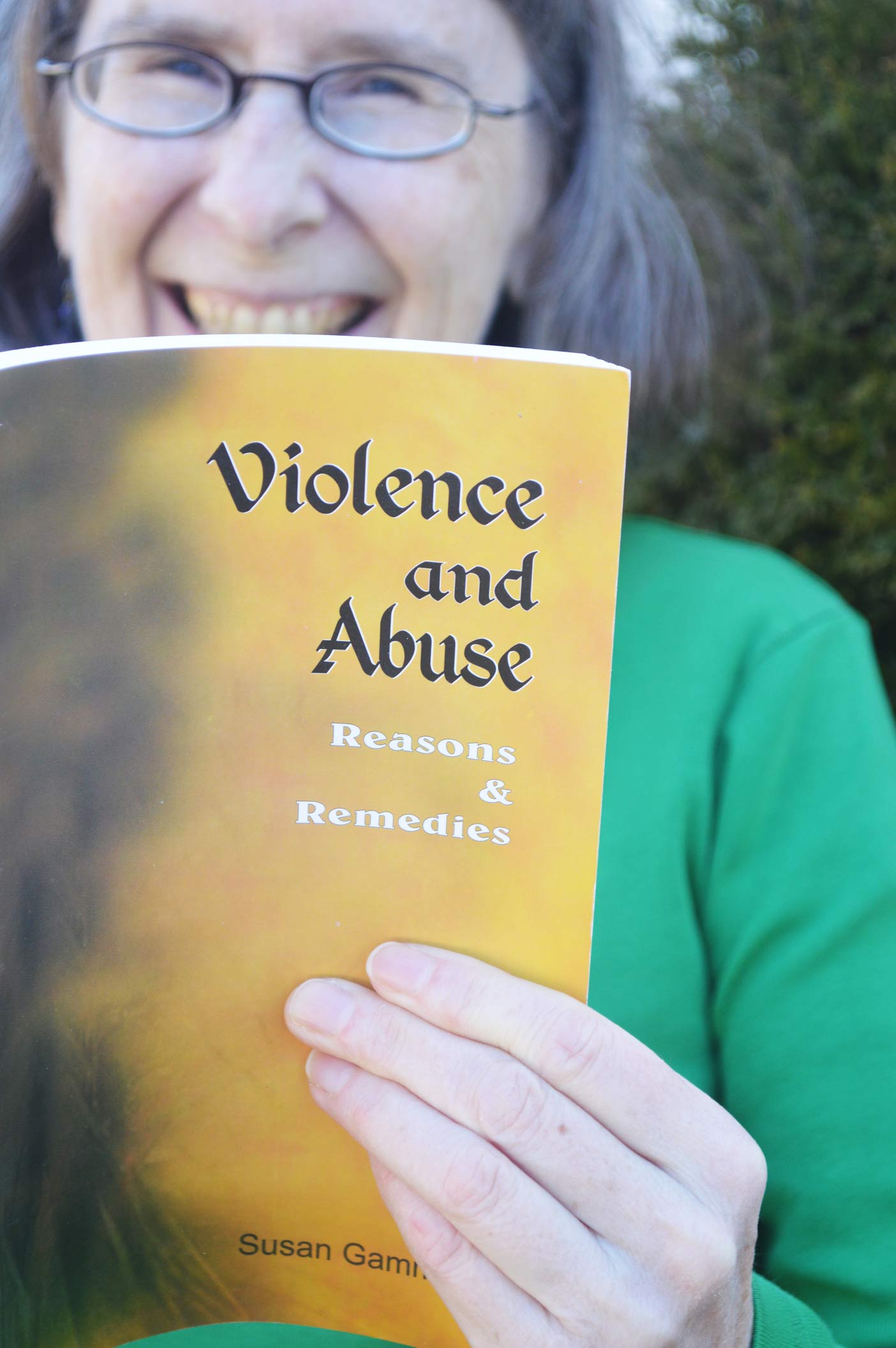 Local author Susan Gammage has published more than 15 books as part of her journey to healing. Her first book, Violence and abuse is a must-have for victims of the title.

For years, though, she lived in fear and was plagued by feelings that she was not good enough, for anything, really: not to laugh and have fun, not to look at herself as wholesome and beautiful, and not to love and be loved. She sought therapy and counselling and was on anti-depressants and anti-anxiety medication. She chose the natural route as well – homeopathy, acupuncture, meditation, core belief engineering, and iridology.

But it was when she came across the Bahá’í writings that she really started to merge onto the road to healing. “I truly believe the Bahá’í faith and writings are God’s message for humanity,” she says. “When I started taking the writings more seriously and applied them to my life, things started to change.”

The first thing she did was make a list. A long list. Of every single instance where she was hurt, mentally, physically and emotionally. She had to forgive herself for believing she was worthless. And then she had to work on forgiving her parents for what they did to her. In order to claim her life and accept what happened, she had to believe it wasn’t her fault.

“This was central to my healing. Forgiving my parents didn’t mean what happened to me was right, it meant I was letting go of that attachment, of poison, of bitterness.”

Susan started writing because it helped put things in perspective. It’s been a driving force to achieving clarity and acceptance and brings her a deep sense of accomplishment. She doesn’t do it for the money. She’s fulfilling the end of a bargain she made to herself. She’s letting people know they’re not alone. Because at one point, a long time ago, she thought that she was.

“People are finding me from all over the world. Every single day of the week I get fan mail from someone telling me they’ve been touched by my story. It’s very gratifying and that keeps me going.”

I’m still not sure how she manages to smile as much as she does. I guess she’s where she wants to be in life. The happiness she exudes sure says a lot about the strength of the human spirit. And Susan’s seems unbreakable.

To follow Susan’s blog or check out some of the books she has available visit www.susangammage.com.