You are here: Home / Community / Of light and love: Meet Laura Heming

When Laura Heming travelled to Machu Picchu, Peru, back in 2008 as part of a spiritual quest, she had a moment. A crazy, life-altering, eye-opening one. She felt something she’d never felt before.

“There was a moment in time where I actually experienced an expanded connection to everything,” she says. It was a total awakening and a pivotal moment in her ongoing journey toward enlightenment. After all, she is constantly striving to achieve a state of enlightenment.

It wasn’t the first time she’d taken part in a spiritual journey to a far-away place, and it wasn’t the first time she’d found herself at Machu Picchu either. Her first trip there was in 1976 and there’s been countless others around central and south America since. Over the years, she’s been part of many sacred, spiritual rituals that have a history of being performed for thousands of years. Right now, she’s in a cave in Mexico on yet another spiritual quest. She’s in Teotihuacan, Mexico, at the Pyramid of the Sun, and the reason why she’s there is extra special. It’s a continuation of her journey toward healing. Her son, Timothy, died when he was just 12 years old and today marks the 20th anniversary of his departure from the world. (Though his spirit lives on, Laura will tell you.) He suffered from spina bifida and Type 2 Arnold Chiari malformation, but he let anyone who came in contact with him know that he was more than just his body. Three months later, tragedy struck again when Laura’s husband left. She had two other children, Kate and Jesse, so she had no choice but to keep her chin up. It was never easy, but having a group of close friends was crucial in her ability to pick herself back up and get through a difficult time.

From an early age she was told by her father that she was going to make a great masseuse when she got older because she “always knew where the pain was.” Indeed, something stuck because for most of her life she has worked with people and her goal has always been to “awaken them to their greatest potential.” She owns The Freedom Place, a holistic healthcare centre, and while her practice has certainly evolved over the last 20 years, everything Laura’s been through has led her to exactly where she is today. She’s a councillor, teacher and facilitator. She’s a hands-on healer who uses a variety of techniques in her practice, including reflexology, massage and stone massage. She’s also a Reiki Master, and that form of energy healing has been one of her greatest joys in life.

Five years ago, she became a certified health coach in integrated nutrition. She’s constantly teaching courses and offering workshops to help people in the community gain control of their life. She also provides counselling for staff and family members of numerous organizations in town, including Huntsville District Memorial Hospital, TEMBEC, One Children’s Place, Fairvern Nursing Home and the Community Care Access Centre. Her goal is always to connect people in mind, body and spirit. In her own special way, she is able to open people’s eyes to the fact that there’s a reason for everything and everything is connected. In 2015, she was the recipient of the YWCA Women of Distinction Award for Health, Sports and Wellness, a real honour and proof of her dedication to her work.

We’re spiritual beings having a physical experience before going back to spirit. That’s always my primary directive. I’m helping people connect to that, and helping them be in charge or gain some sense of control over their physical being.

Her biggest piece of advice? People need to remember they choose. At any moment, you are in a situation where you’re making a choice. When she works with people, she wants to make them aware that they are not their body – that they have to learn to be in their body – and when they consciously create life from being present in the moment that’s the only place they can create their life from. Laura wants people to be aware of the joy that can be found when they choose to live in the now. It’s absolutely vital to living a meaningful and fulfilling life.

“When people live in the past, it brings pain,” says Laura. “When we worry about the future or what we’re not going to have, it brings the same pain as when we judge ourselves and others. When we go through life being present, every moment becomes a joy with how we engage.”

She’s highly spiritual, tapped in, tuned in and aware but that doesn’t mean she isn’t constantly on the lookout for opportunities to go more deeply into her own soul. She has some unique approaches when it comes to helping people mend from pain, whether that be physical or emotional. Laura usually treats people in blocks of time, and that entails a minimum of six sessions because any sort of change takes time, she says. If someone comes to her with an injured leg, she will try to pinpoint what exactly was going on in their life at the time they got hurt – there is almost always a connection. By the end of the six sessions, it’s not unusual for the individual to come back and tell Laura they feel significantly better or that they got their life back. In other words, she shows them the light. She strives to teach people to see patterns in their life, and when they see those patterns, they can “stop beating themselves up and learn to love themselves more.” 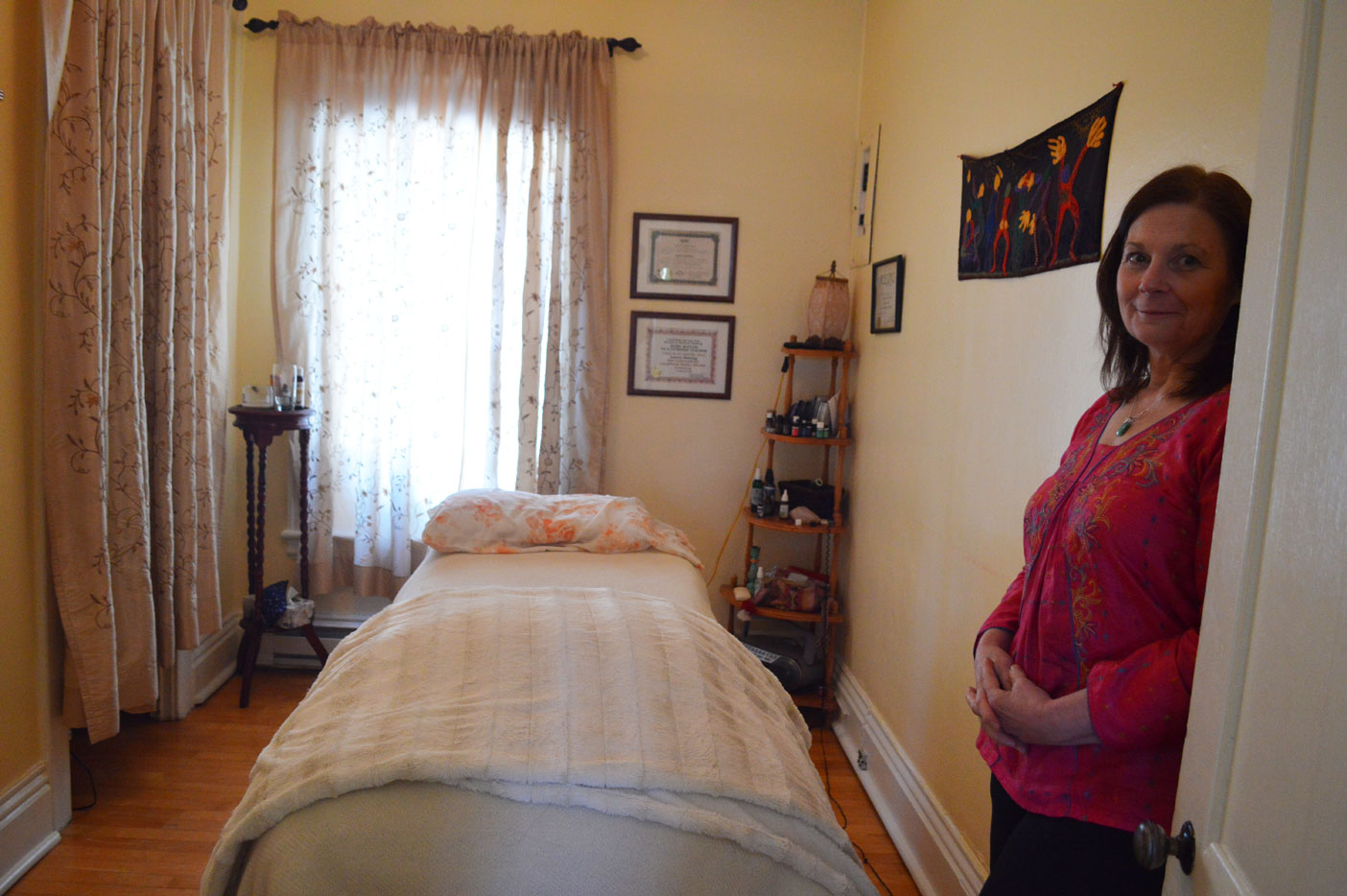 The room where magic happens! Laura has created a relaxing and inviting atmosphere in her beautiful Huntsville home. This bed has been where hundreds of people have received Reiki treatments and other hands-on healing treatments. 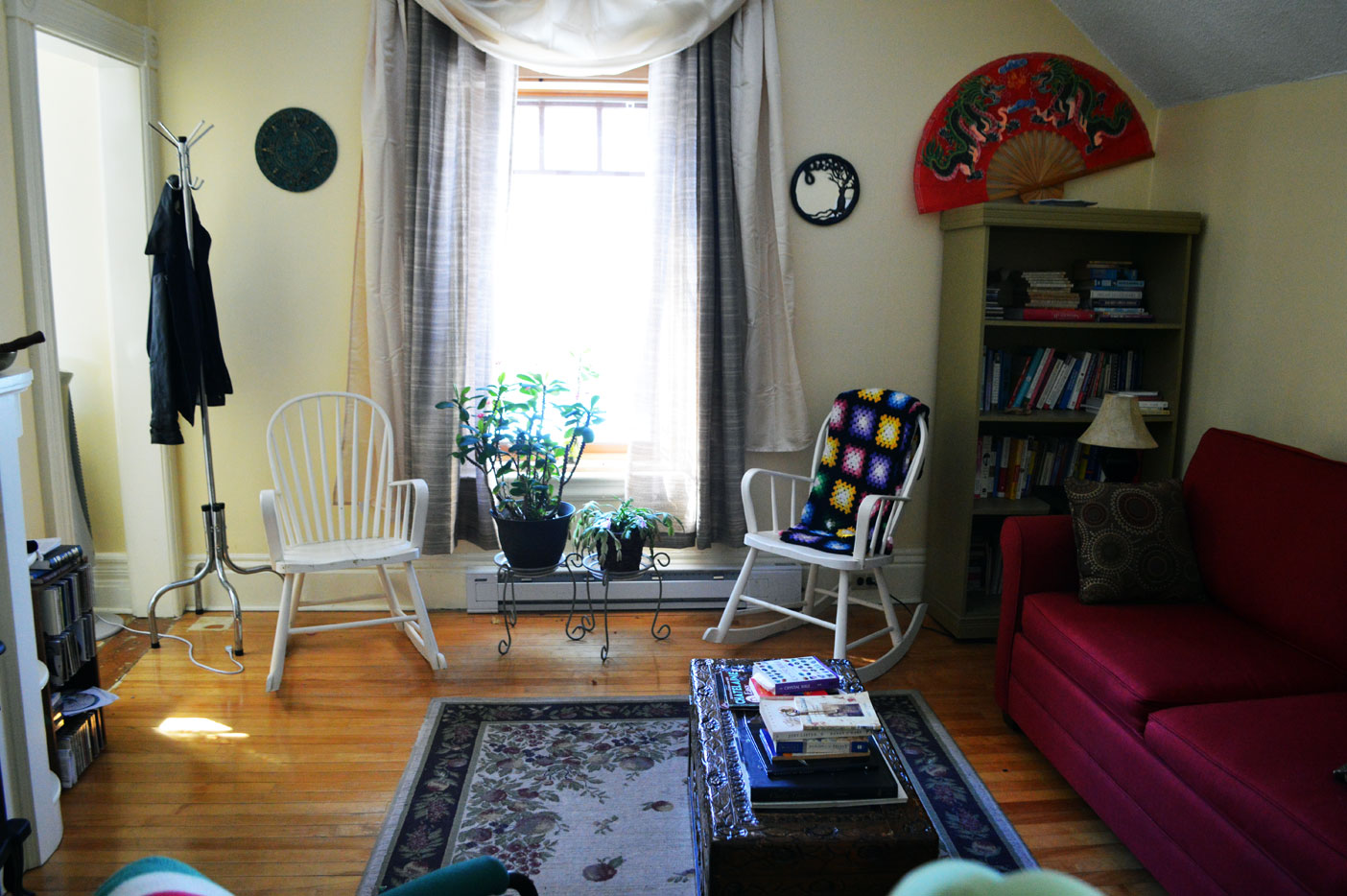 Even the sitting room has its own unique energy, thanks to Laura’s personal touches.

“I feel like I finally have enough things under my belt when people come in, it doesn’t matter what they come for, I can help them. Maybe it’s for regular counsel, or body work for chronic pain and disease… People just come to me in spiritual crisis.”

She’s intuitive when she’s healing and that’s probably because she’s guided by some divine force. And to be perfectly honest, it’s sort of like she is a divine force herself. She’s a natural-born healer and for Laura, helping people get the best out of life is what empowers her to keep doing what she does. Ultimately, she gives people the freedom to live their lives to the fullest.

“What I aspire to be is just open-hearted and loving,” she says.

On May 17, one of Laura’s greatest teachers, world-renowned Mexican healer Sergio Magaña, is coming to The Annex at the Huntsville Public Library for a book signing for his best-seller Caves of Power. The cost is $15. He is also offering a workshop that runs from May 18 to 19 at Hidden Valley Resort called Cosmology of the Aztec Calendar. For more information visit www.lauraheming.com.