All Highway 11 traffic once passed beneath this archway, which was located in Huntsville’s west end. At the time it was built, in 1932, the Department of Highways provided road signs identifying all the towns along on highways in southern Ontario, communities in Muskoka were left to their own devices. The idea for the archway came from Harold Briggs, chairman of the publicity committee of the Huntsville Board of Trade. Local families were invited to contribute stones for its pillars.

In July 1958, a truck carrying a bulky load struck the heavy steel beam that joined the pillars and knocked it from its moorings. An oil company had been pleading with town council for years to widen the arch or remove it because trucks could not get through town. Following the accident, the archway was removed.

(Image courtesy of Muskoka Digital Archives. Details from Huntsville: With Spirit and Resolve by Susan Pryke.) 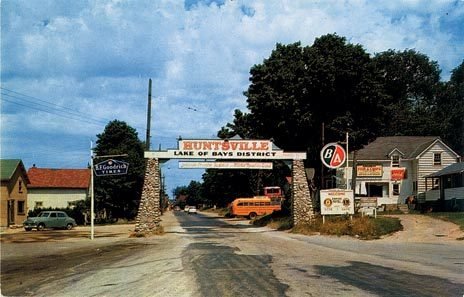