Santa’s a busy guy. Sometimes he needs the assistance of helpful people to be in all the places he needs to be in the lead up to the big day. Can you name Santa’s helper in this photo? 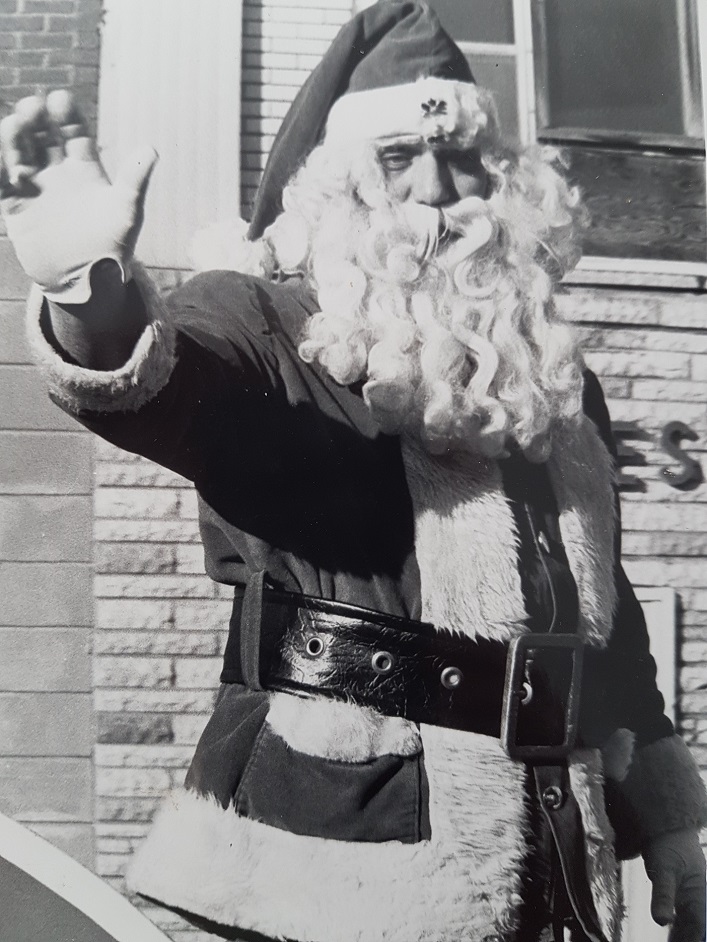 In this December 28, 1911 photo, firefighters work to control a blaze at the Wardell Building at 77 Main Street East.

Below is some early history about the Wardell family, courtesy of the Muskoka Digital Archives.

Matthew Wardell (1842-1934) was born in Canada. In his early years he lived in Toronto with his wife Mary Grace Smale (1845-1937) where he was listed in the Toronto City Directory as an auctioneer, jobber and dry goods merchant.

In 1895 the family moved to Huntsville. Matthew rented a store at 77 Main Street East [where Spectacles Vision Centre is today]  and in 1902 bought the building. The store is described in a 1906 issue of The Forester as follows: “The building is 40 x 62 feet in size…The very large stock of goods carried might very well fill a store much larger. Every foot of space obtainable is crowded with goods. There is a well-stocked dry goods department which contains practically everything usually comprised in the term ‘dry goods’. There are ladies’ ready-to-put-on skirts and blouses and white wear; men’s clothing and furnishings; boots and shoes for both men and women, house furnishings in carpets, oil cloths, curtains, etc. All kinds of produce is bought from farmers, and considerable quantities of butter are shipped. Many tourists and campers are supplied from this store, for a gasoline launch is owned and used to deliver goods to Fairy Lake and Peninsula Lake resorts. It is a steady satisfactory business that is being done at the store and the years have brought a good measure of prosperity to its proprietor.”

During the summer the family lived above the store, but in the summer they lived at their cottage called Bide-A-Wee on Fairy Lake.

On December 28, 1911, tragedy struck when a fire caused by an overheated box stove destroyed the building. The family rented the building across the street at 86 Main Street East [the present location of Algonquin Outfitters}, which had been occupied by Hanna and Hutcheson Brothers, and resumed their business. After paying rent of $600 per year and installing hydro, the Wardells bought the building in 1920 for $6,000.