You are here: Home / Community / HPS students do their part to keep Huntsville clean

During Earth Week, Huntsville Public School students were out in force to clean up downtown Huntsville and the area around their school. On Tuesday, April 19, about 40 grade seven and eight students cleaned the blocks surrounding Town Hall.

Then, in a whole-school effort on Thursday, April 21, classes took turns cleaning up the streets around their school, including Natalie Banks’s grade four class and Gina Gefucia’s grade five class who cleaned up the Empire lot.

“Lots of people really litter,” said student David Robinson. “They should use garbage cans more and recycle, and maybe crush plastic bottles and put them in their pocket until they get home if they can’t find somewhere to put it.”

Maeve Young agreed: “Some people are being weird. There’s a garbage can right here but they don’t take three extra seconds to put their garbage in it.”

The students picked up cigarette butts, plastic bottles, pieces of plastic and paper, and rusty metal but were instructed by their teachers to leave dangerous items like glass and large items like the bathtub they found alone. 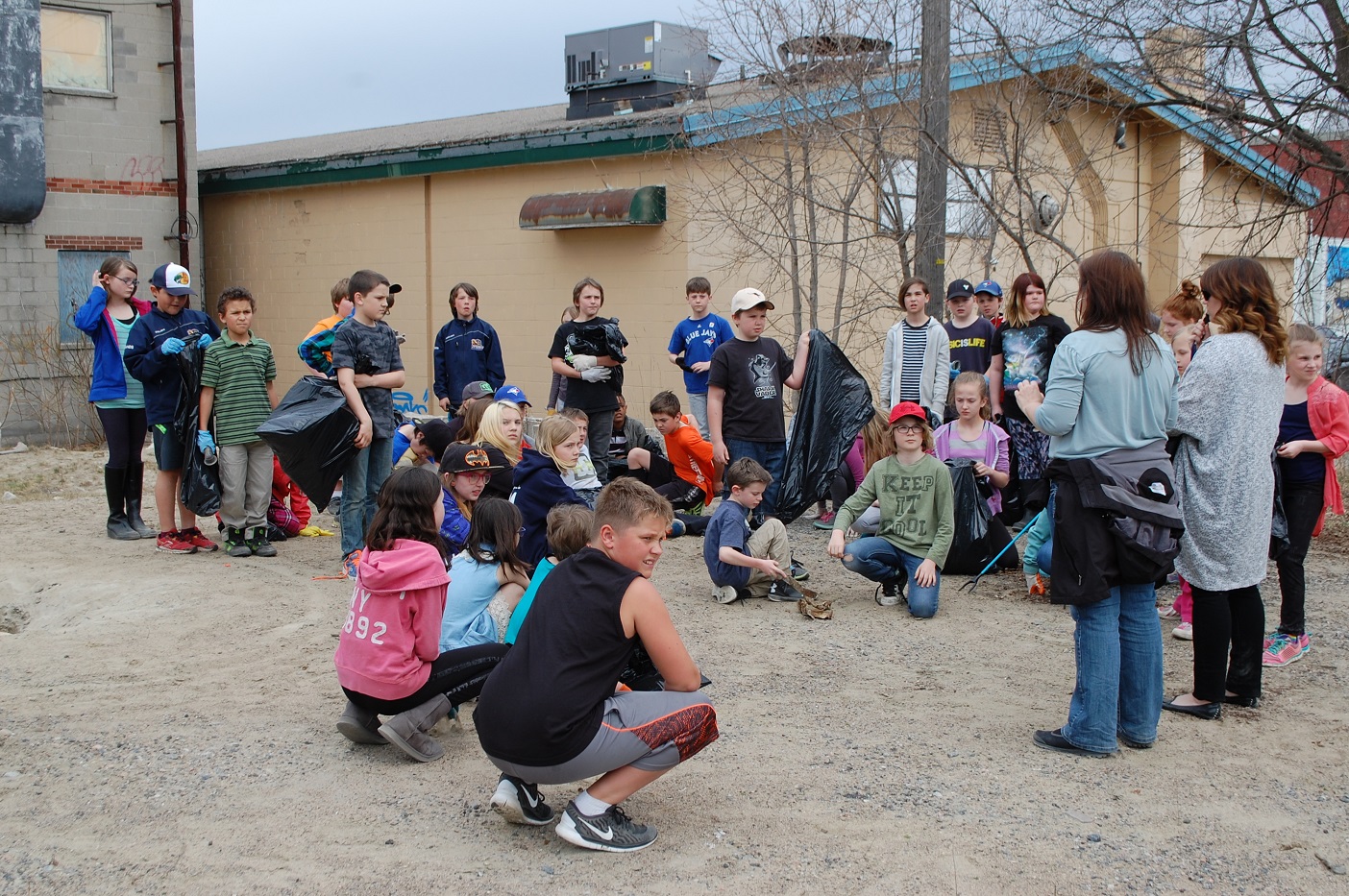 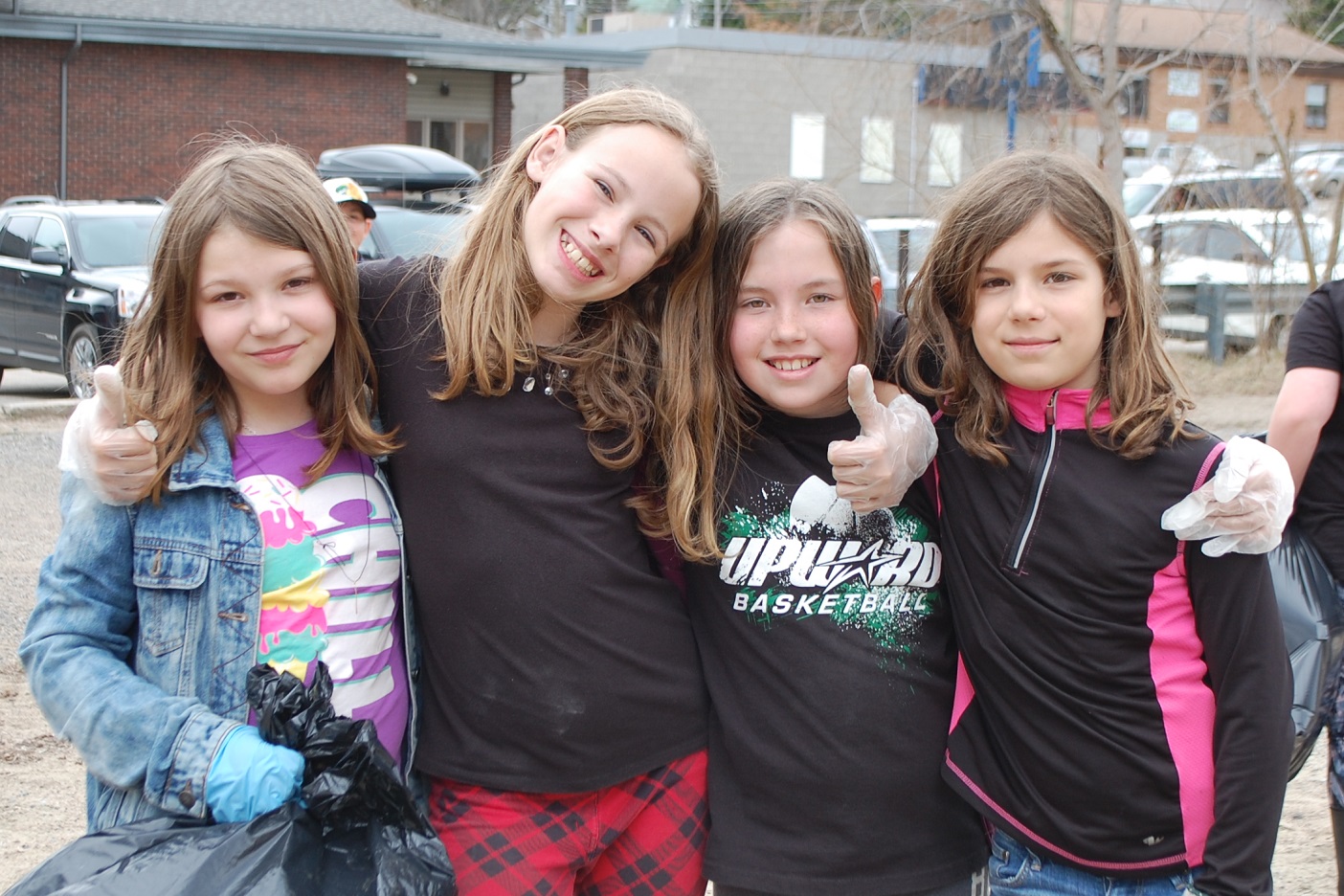 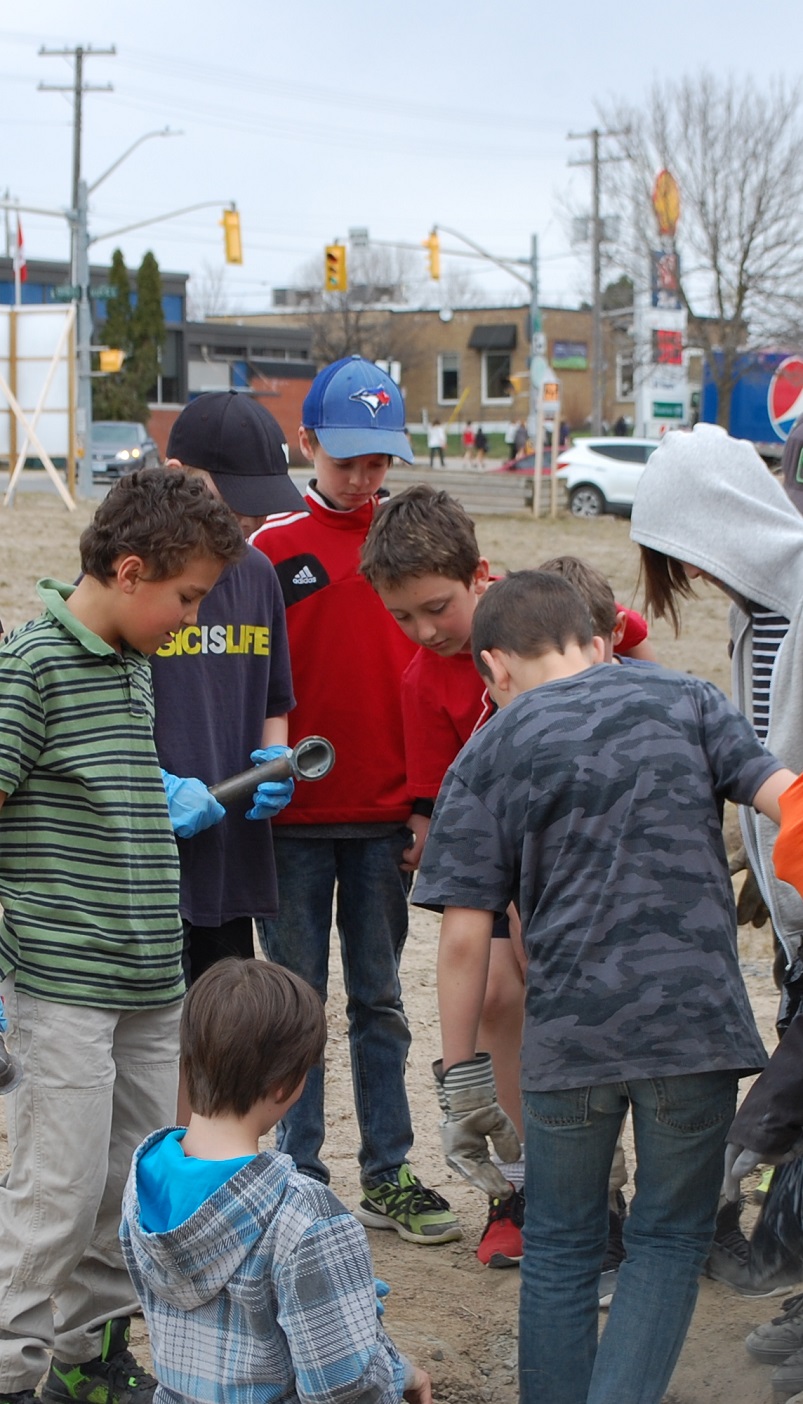 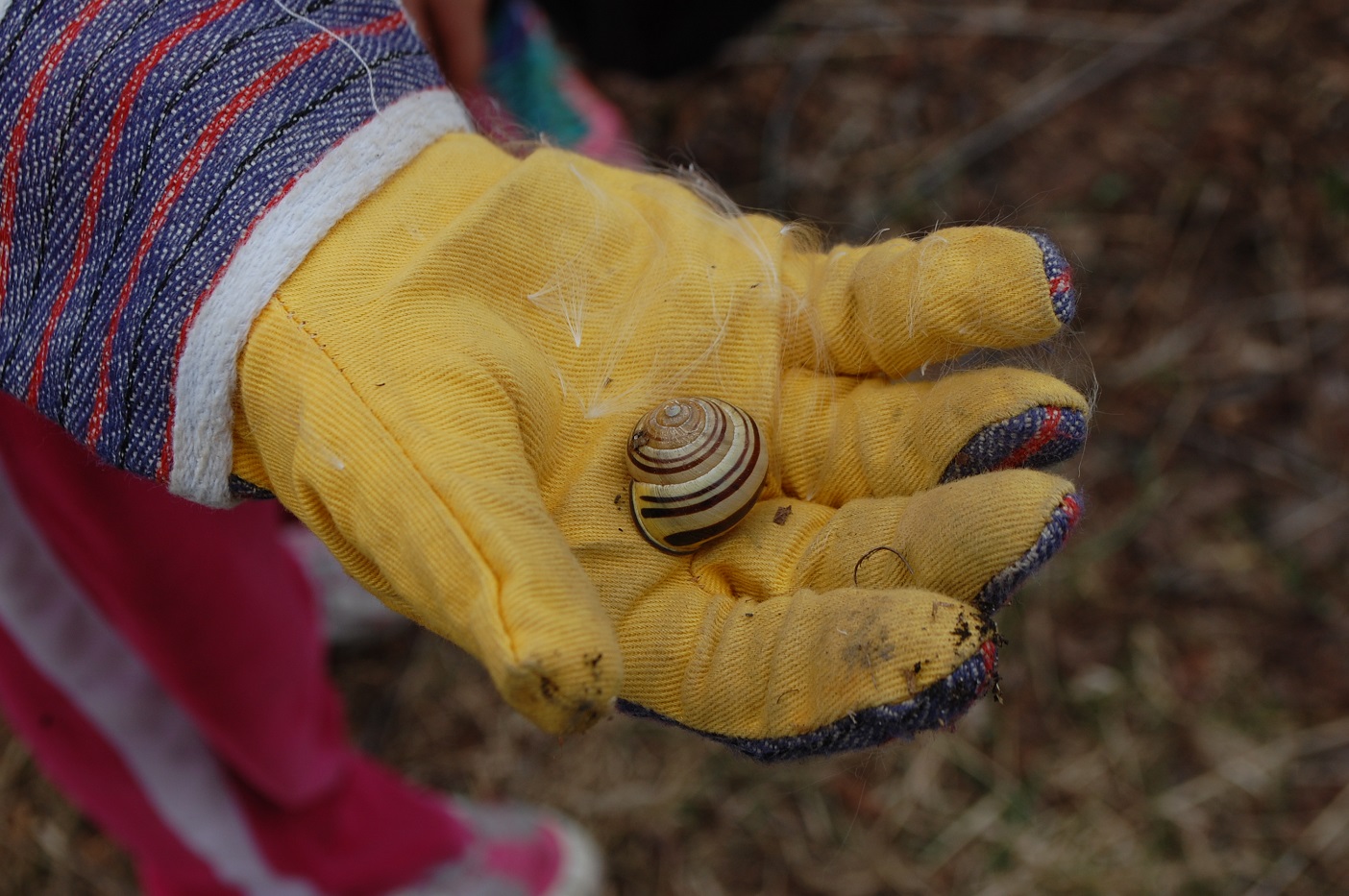 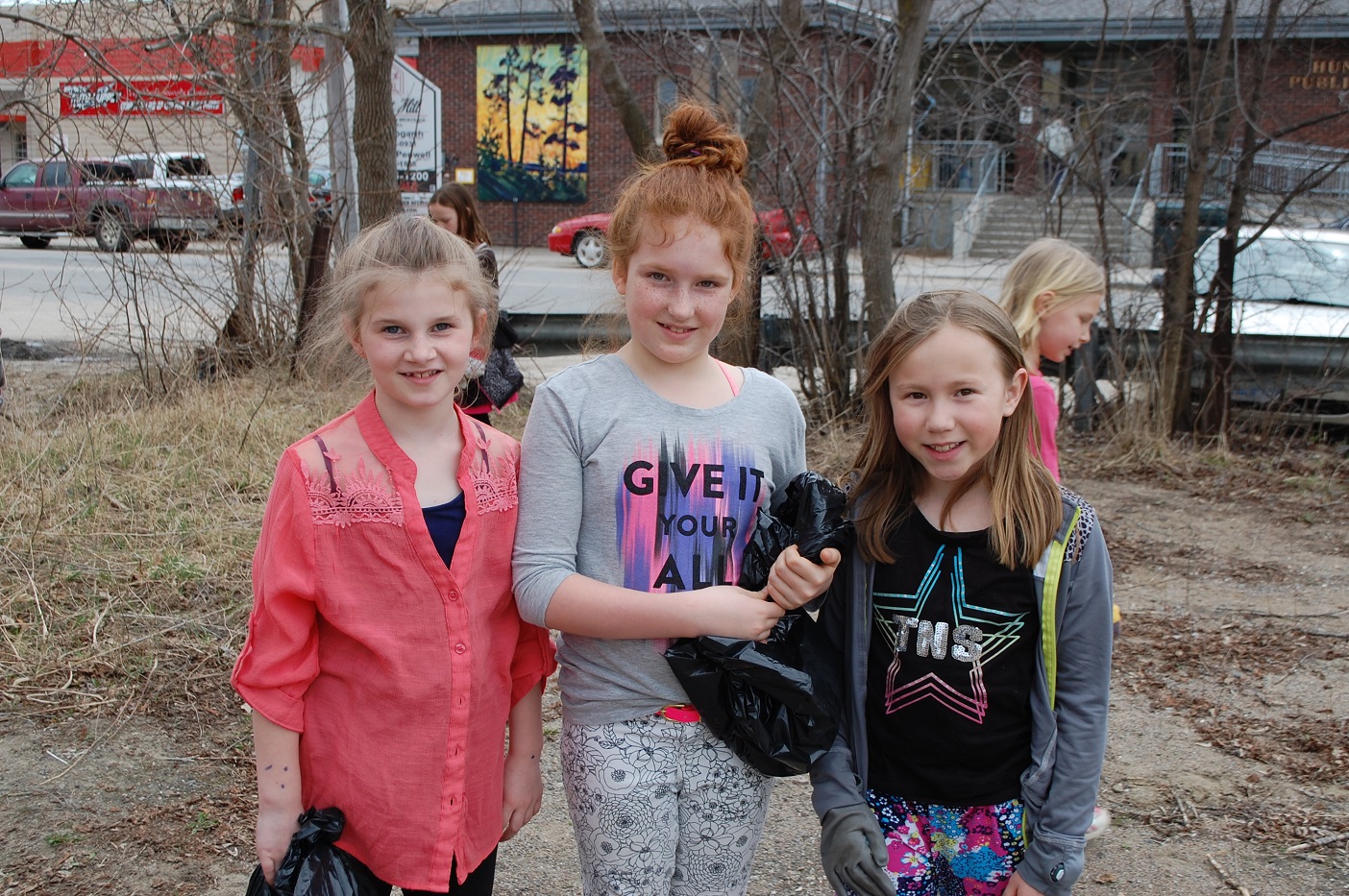 (Clockwise from upper left) Students gather for instructions from their teachers; kids being kids, a sinkhole was one of the most exciting things they found; Olivia Jones, Keely Reid and Sophie Leeder; Samantha Percival and Ashley Lowis; not everything was garbage – Megan Koop was excited to show off the shell she found; Hailey Ellas, Trinity Lemay, Ally Frankland, and Erin Shipston

“There’s a lot of smokers around,” noted Megan Koop. “They should put their butts in the garbage. If we don’t stop polluting Earth, Canada will become a big dump.” When asked what she thought a good solution for all of the garbage would be, she said, “we should put it in a rocket ship and fly it into space forever!”

Community clean-ups are happening around Huntsville tomorrow (April 24) and in coming weeks – watch for one in your neighbourhood.