You are here: Home / Community / How do you paint a tree using only a canoe? Ask Tyler Muzzin.

How do you paint a tree using a canoe but no paints? New media artist Tyler Muzzin plans to do just that as he completes a 200-kilometre canoe journey from the site of Tom Thomson’s grave at Canoe Lake to his Thomson’s shack – where he lived and painted until his death – which now sits at the McMichael Gallery in Kleinburg.

“I’m not really interested in representing landscape traditionally – I don’t paint,” says Muzzin. “The project is called How to Paint a Tree but I’m thinking how to put a slant on it and ‘paint’ something politically or sociologically or economically.”

Muzzin has spent a lot of time in Muskoka – based out of his grandparents’ Harp Lake property – and  Algonquin Park. In good traffic, the trip from Toronto to Algonquin Park takes three hours. Muzzin wondered what it would be like to see that route at the speed of a canoe. “Anyone who has driven a route and then walked it, it looks completely different. You notice very small things, smells, sounds, that you would never notice otherwise.”

And when Algonquin Outfitters stepped in with the use of a Swift Prospector canoe, he had his means.

As a contemporary artist using new media, Muzzin will be exploring how the landscape is relevant without painting beautiful pictures. He calls his concerns ecological – not so much environmental as examining what we do in the areas we occupy. “Why do people still call Algonquin Park wilderness when it’s essentially a lumber company’s preserved tree area? As beautiful as it is, is it nature? Can you take a weekend off and go up and feel you’ve connected with something and then go back to Toronto and live your consumer lifestyle?” 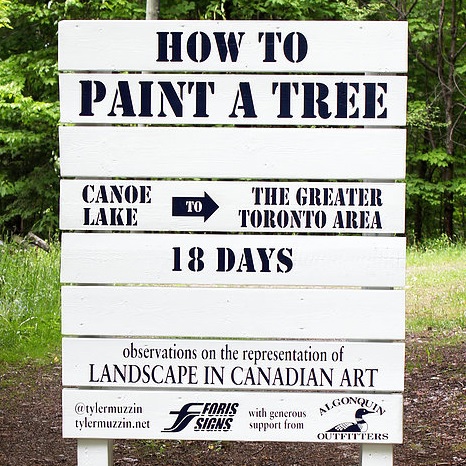 Muzzin plans to document both on video and in a journal what he encounters – the people and the infrastructure in particular – and use it to generate a body of work for exhibition and a film that he plans to submit to the Reel Paddling Film Festival in Huntsville next year. “I want to keep it as open as I can, I want it to be a spontaneous project. I want to acknowledge the tradition even though I don’t do the landscape paintings – it’s not something I can just ignore – but it’s going to be looking intensely at development and infrastructure along the way.

“Being an artist is a filter of what you see, rather than just miming and copying. I don’t want to make work in a vacuum.”

The project started June 11 and, if all goes as planned, the trip to the McMichael Gallery will take a total of 16 days even with some significant portages. He may even continue on to Lake Ontario from there – it’s only another 34 kilometres via the Humber River.