Every month, I will be profiling an extraordinary human being who lives in our community. If you know someone who is doing something interesting with their life or has an inspiring story to share, I want to hear about it. Send me an email at [email protected]

He’s only 19 but he’s got a life story that would make for an epic best seller.

His smile is sweet and his eyes have a worldliness to them. He’s bold and eccentric and he’s got something important to say. Because once upon a time Riley was assigned female at birth. He’s aware of the misconceptions. He knows first-hand that they come from a lack of understanding.

The light in his eyes and the pep in his step is reflective of how good he feels these days. He’s a trans man and he’s proud of it. He had to hide his true self for too long, sort of sweep it under the rug that he wasn’t in the right body. It was no way to live. In fact, there were many times when he didn’t want to. But now that the cat is out of the bag, Riley is on top of the world.

“I’m golden,” he says. And you can actually hear the truth in that statement. “It’s taken me a long time to feel comfortable in my own skin.”

Just the other day he went swimming for the first time in three years. He couldn’t wait to take off his shirt. It was a liberating and exciting moment because it was only eight weeks ago he had top surgery (a bilateral mastectomy). The scars are a reminder of how far he’s come in his journey toward becoming a man.

When I looked down at my chest, with the bandages still on, I just bawled. It was the first time I felt at home in my body.

When he thinks back to his childhood, things were pretty normal. Riley was just a typical tomboy who liked playing outside, making mudpies and waking up early to watch Pokemon. He loved video games and he wore baggy jeans and all his friends were guys. 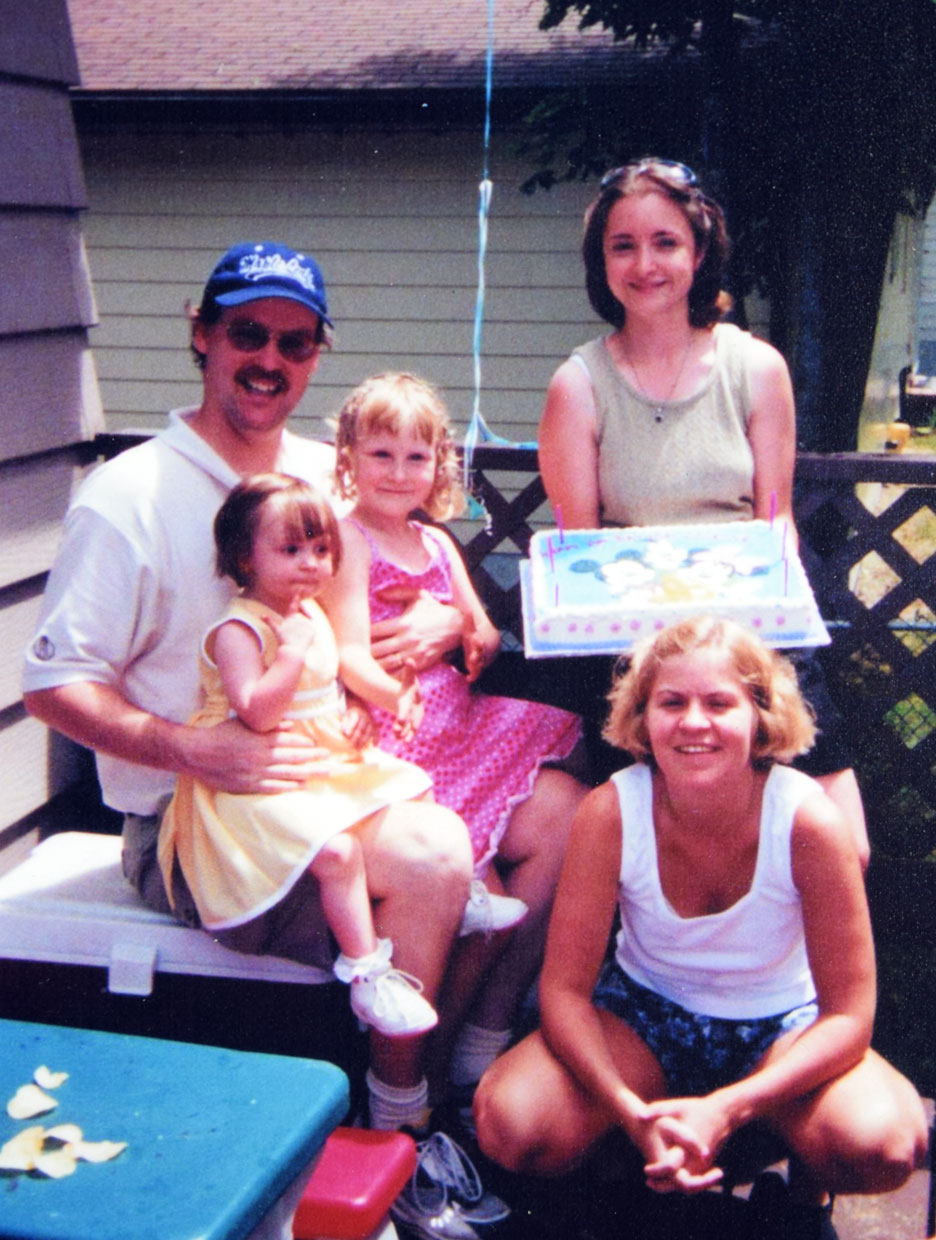 Riley grew up with a loving family and says he was a typical tomboy (he’s sitting on his dad’s lap with his sister). 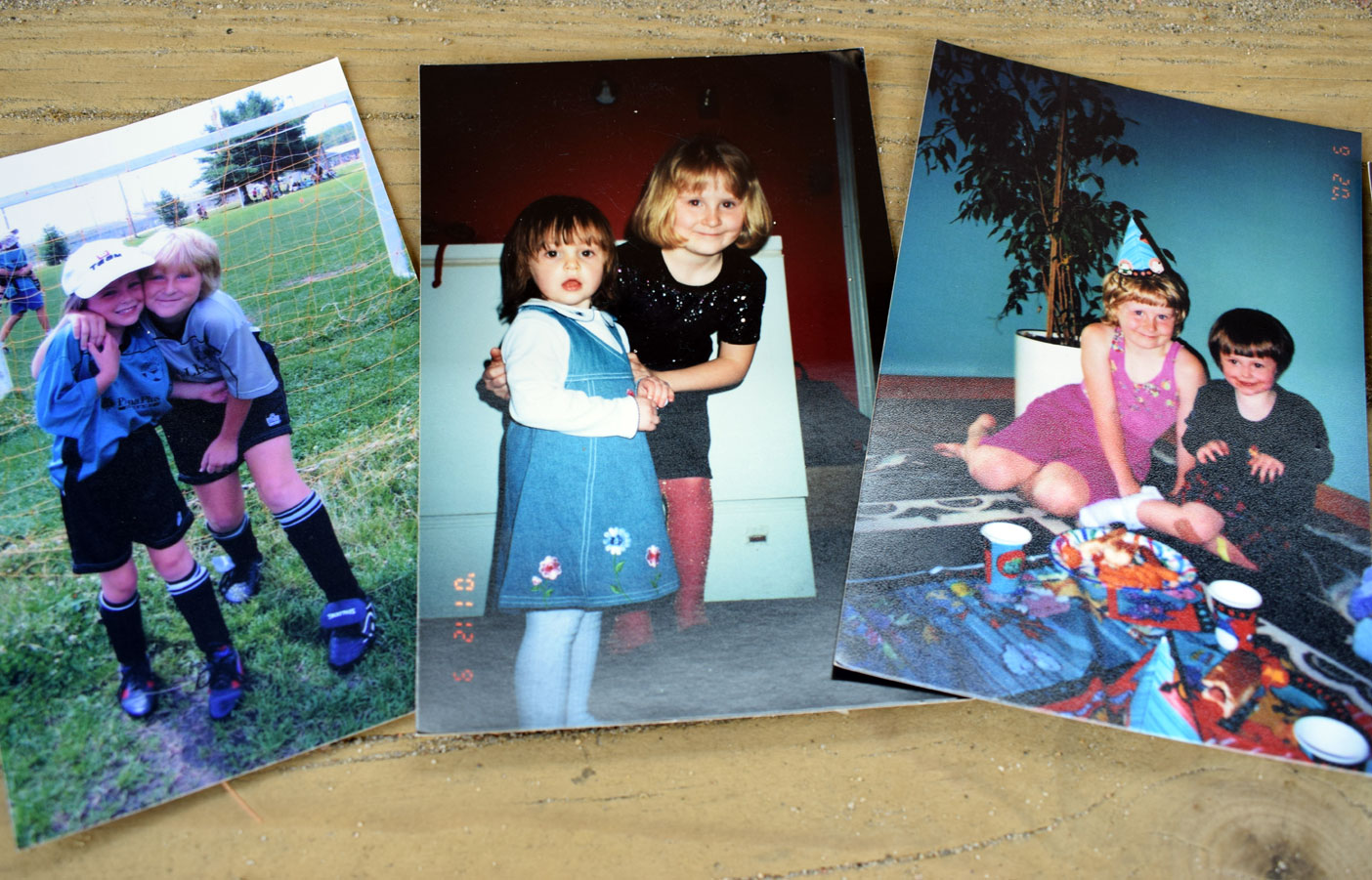 Riley is able to reflect on moments from the past with love in his heart. He is finally who he wants to be. (Photos supplied by Riley McEntee)

Riley grew up with a loving family and says he was a typical tomboy (he’s sitting on his dad’s lap with his sister in the photo above left). He is able to reflect on moments from the past with love in his heart. He is finally who he wants to be. (Photos supplied by Riley McEntee.)

High school wasn’t exactly a breeze, even though he liked school and got good grades. But his early teenage years were a complicated time. He had mixed feelings about who he was. Deep down he knew he wasn’t in the right body. He couldn’t shake the thoughts of being in awe at a guy who had the ability to grow perfect facial hair. That stunning individual with all his masculinity and manliness was an idolizing thought for Riley. But never in his wildest dreams would he have thought he could change who he was.

The moment it clicked that I could be a man, the thought of having to stay in the closet never occurred to me. I knew it would be hard at the beginning to come out, but once I did I would feel so much better.

His last year at Huntsville High School can go down as the worst time of his life. He came out on March 3, 2017. He could hear the snickering and nasty remarks from other students. It hurt so bad it left a mark. He was always on the receiving end of a bad joke. He contemplated suicide a lot. It would be easier to be gone than to deal with what he was going through.

“I don’t think I’ve ever felt so unwanted, unloved and alone in my entire life.”

It was even hard for Riley’s parents to accept that their daughter wanted to be their son. Luckily his sister was by his side right from the moment he told her he wanted to change. Her unconditional love and support was a guiding force in helping him get through an emotionally turbulent time. And, thankfully, he got that same love from his childhood best friend. It took some time but eventually his family came around. Their ‘daughter’ became their ‘son’. It was ‘he’ now. It was ‘him’ not ‘her’.

Not every trans person takes hormones or gets surgery. I’m on the extreme side. I want all the surgeries, hormones and legal changes.

Six months after Riley came out to his family is when he started getting hormone injections in preparation for the big change. Over a period of time, the testosterone doses were increased. He started getting hair everywhere, making the whole transition start to feel more real. His voice got deeper and deeper. That was the ultimate high. Never before had he wanted to open his mouth to speak. But now he liked the sound of his voice. Now, he wanted to talk. And he was no longer misjudged. Last year, he had his birth certificate changed and it officially declares Riley Xavier Tiberius as a male. That was another glorious stepping stone.

I tell people my biggest accomplishment in my life so far has been learning to love myself. I deserve every good thing I’ve ever got. I deserve just as much respect as the next person. I don’t want to be praised as a good trans person. Ideally I’d like to be a good person who also just happens to be trans. I want it to be known my identity doesn’t define who I am. It’s not my personality or lifestyle. It’s as simple as I like white chocolate better than dark and I have two cats.

Feeling as though you’re not in the right body is a complicated matter and one that is often misunderstood. Riley knows that, but that is why he wants to talk about it. He wants to lay it out on the table. Open, honest and raw. He will put himself out there, totally vulnerable, so others who are going through what he did know they are not alone. The topic of being trans does not have to be off limits.

And being trans blends in beautifully with Riley’s love for politics. He’s the Equity Director for the Ontario New Democratic Party Youth. He also has a position in the local NDP riding as their youth representative and is a voice for the LGBTQ2+ community.

“I don’t want people to go through the same shitty things I did,” he says. “I have a voice and I’m not afraid to speak. Being in politics gives me the chance to make change. I believe there’s so much that needs to be changed. I don’t want to sit and complain. I want to be able to do something about it.”

(A huge thanks to my wonderful editor Dawn Huddlestone for suggesting this month’s extraordinary person. You were right, Dawn!)