You are here: Home / Community / Forced to fight, determined to survive

Let’s be honest. I knew I was going to get emotional writing this profile. I lost my mom three-and-a-half years ago to cancer and I’m still a mess. She was 58.

Dave MacDonald is only 38 and he has cancer. I’d never met him prior to our interview and photo shoot, but had heard a lot about him. There have been some fundraisers around town for him. I went to high school with his wife, Karrie. He struggles with the disease every day. And it makes me realize how much I take my health for granted. Here’s a guy who didn’t abuse his body, who always enjoyed the simple things in life like an ice-cold beer and spending time with his family, and now he’s fighting for his life. He doesn’t know how long he has left. He takes it one day at a time.

“I’ll be happy if I make it to my 40th birthday,” he tells me as we begin our interview.

Right away, I sense a gentleness about him. Obviously, he’s bummed out. He didn’t ask for this to happen. Life simply threw him a nasty curve ball and he has to deal with it. I immediately try to stifle the tears. I’m going to start bawling and he knows it. I tell him to give me a moment so I can collect myself and get a hold of my emotions. For some reason, I feel selfish.

I can tell, not just from the things he says about what life is like now compared to what it was even a few years ago, but from the tone of his voice that the cancer is taking a toll on him. Lately his days haven’t been that good. He tells me all about what it’s like waking up in the morning in excruciating pain. He’s on a list of pain meds. Sometimes it’s difficult just to sit up in bed. He has two young kids, Piper, 7, and Lochlin, 5. They are both as energetic as they are cute. He can’t get down to play with them anymore so they usually settle for a card game. His wife is pretty much running the household. She takes care of him, the kids and whatever else needs to be done. She goes to Toronto with him for overnight stays at Princess Margaret. He tells me he doesn’t know how he’d be coping if it wasn’t for her. She means the world to him.

He was just 14 when he was diagnosed with thyroid cancer. He had the cysts removed out of the left side of his neck along with muscle, tissue and lymph nodes and the thyroid itself. He’s been on medication ever since.

“Obviously, when I look back, I don’t remember a whole lot about the experience,” he says, attributing that to blocking out those memories and chalking it up to a “shitty time.”

“I was just starting high school, I spent two or three weeks in the hospital and had a radiation treatment. After that, we thought I was 100 per cent clear… and I was for 23 years until the spring of 2014, when I ended up with pneumonia.”

The pneumonia wasn’t going away. After running some tests and a CT scan, doctors discovered some swollen lymph nodes and a biopsy revealed the cancer was back. Further testing revealed four tumors in MacDonald’s chest. The one that was the size of a tennis ball was crushing the upper lobe of his right lung.

“If I didn’t get pneumonia, who knows when we would have caught the cancer,” says MacDonald. “It might have been too late to do anything. So after I had surgery to remove the tumors, I had 33 treatments of radiation that fall and throughout the winter and into 2015. I did it for seven weeks. I healed up, felt good, went back to work but I had to go back from tests and scans, and that’s when the cancer started showing up other places.”

The cancer has now spread to MacDonald’s liver, pancreas, and made its way into his bones. It’s on his left femur, his hips and both sides of his pelvis. At the beginning of September, he had eight spots in his brain which were treated with 10 rounds of radiation. At the same time, he underwent five rounds of radiation treatment to his hips.

One of the biggest hurdles has been dealing with the pain. His legs ache constantly. Walking is becoming more difficult. He needs a cane to get around and if he has to walk more than a couple hundred yards he needs a wheelchair. He can barely do a lap around the grocery store.

I’m starting to decide is it about quality or quantity? That’s what it’s come down to unfortunately.

MacDonald can’t speak highly enough of his wife, who has been by his side every step of the way. The two have been married for six years. They spent their six-year anniversary in Vegas because he was in the hospital for their five-year anniversary the year before. The things he can no longer do, Karrie makes up for. She is running the household 99 per cent of the time.

“It’s like she’s a single mom with three kids,” he says. “She has to look after me. And that breaks my heart. If it wasn’t for her I don’t know how I’d get through this. I don’t know how many nights she’s spent beside me in the hospital. We get admitted and then end up having to stay and she’d be sleeping on an uncomfortable cot. But she was there.”

He will be on chemotherapy indefinitely.

“Basically all this is doing is buying me more time. There is no cure. There are days when I wake up and I’m a freaking mess. I mean, I’m done with this. Not being able to do anything anymore and if I do get out of bed, what am I going to do? I just can’t do anything and it’s driving me crazy. My mobility issues are getting worse. With the pain meds, [the doctors] are just trying to make me as comfortable as I can be. But at the same time, I don’t want to just hang out in bed. I’d rather have one year to get out and do things rather than spending the next three years doing nothing or being stuck in bed. I’m starting to decide is it about quality or quantity? That’s what it’s come down to unfortunately.”

MacDonald tells me about how his life was just getting to where he wanted it to be, having kids and his business starting to take off, when the cancer returned with a vengeance.

I was hoping after I had that surgery things would somewhat go back to normal. I never made it that far.

A positive aspect through these trying times has been the support the family has received from the local community. Last September, before his first surgery, a fundraiser was held at the Legion to raise money for the costs he and his family have faced during his ongoing battle with cancer.

More than a month ago, another fundraising event was held at Boston Pizza. Friends of MacDonald’s also initiated a F-ck Cancer t-shirt and sticker campaign where 100 per cent of proceeds continue to go to MacDonald. On December 10, Pete Corbett, owner of East Side Mario’s and a friend of MacDonald’s, is holding a Kick Back Night for him, an event at the restaurant in which a portion of proceeds from meal sales will be directed toward the family. 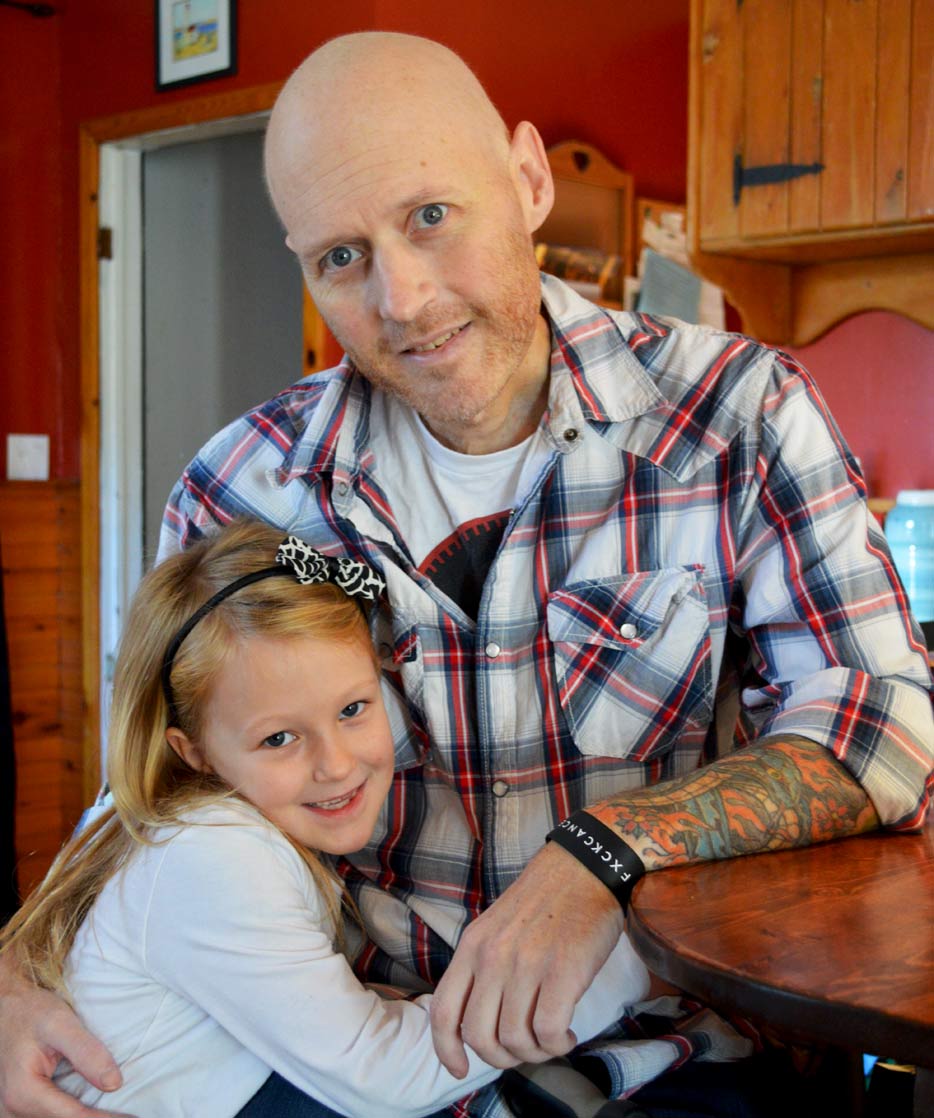 Piper shows some serious love for her dad. 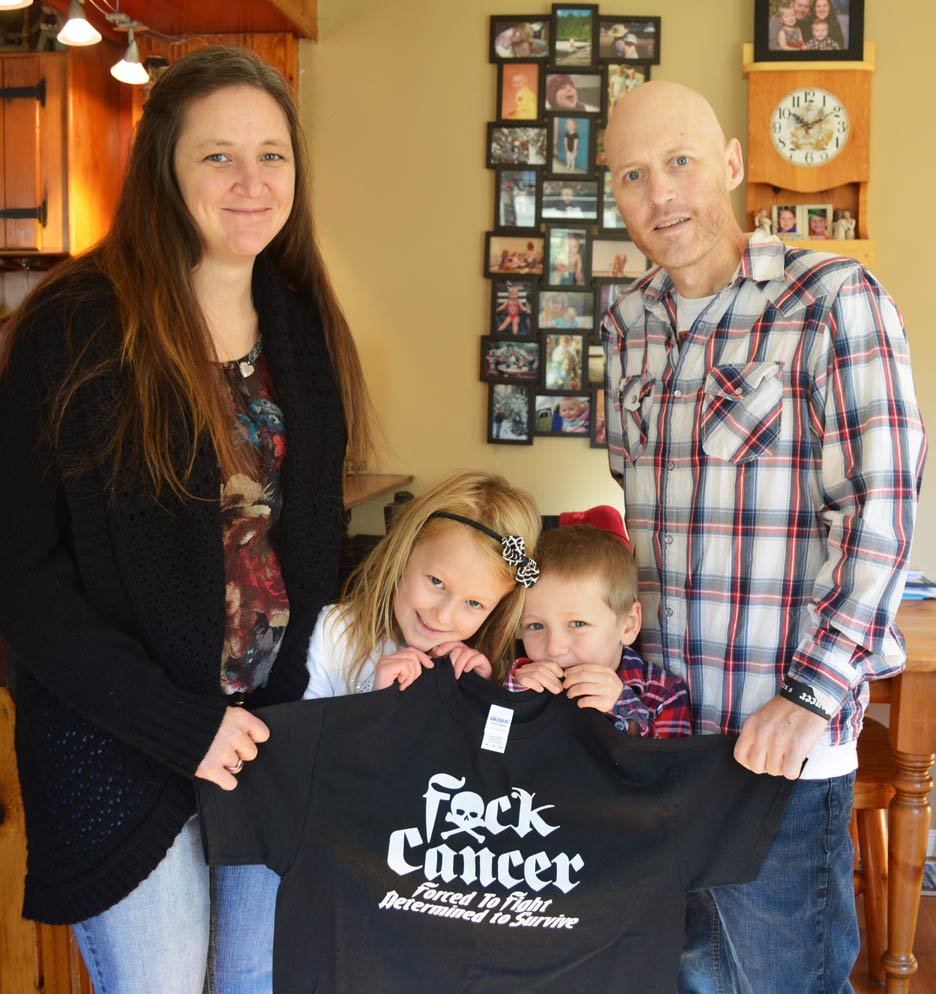 The MacDonald family with a F-uck Cancer t-shirt. 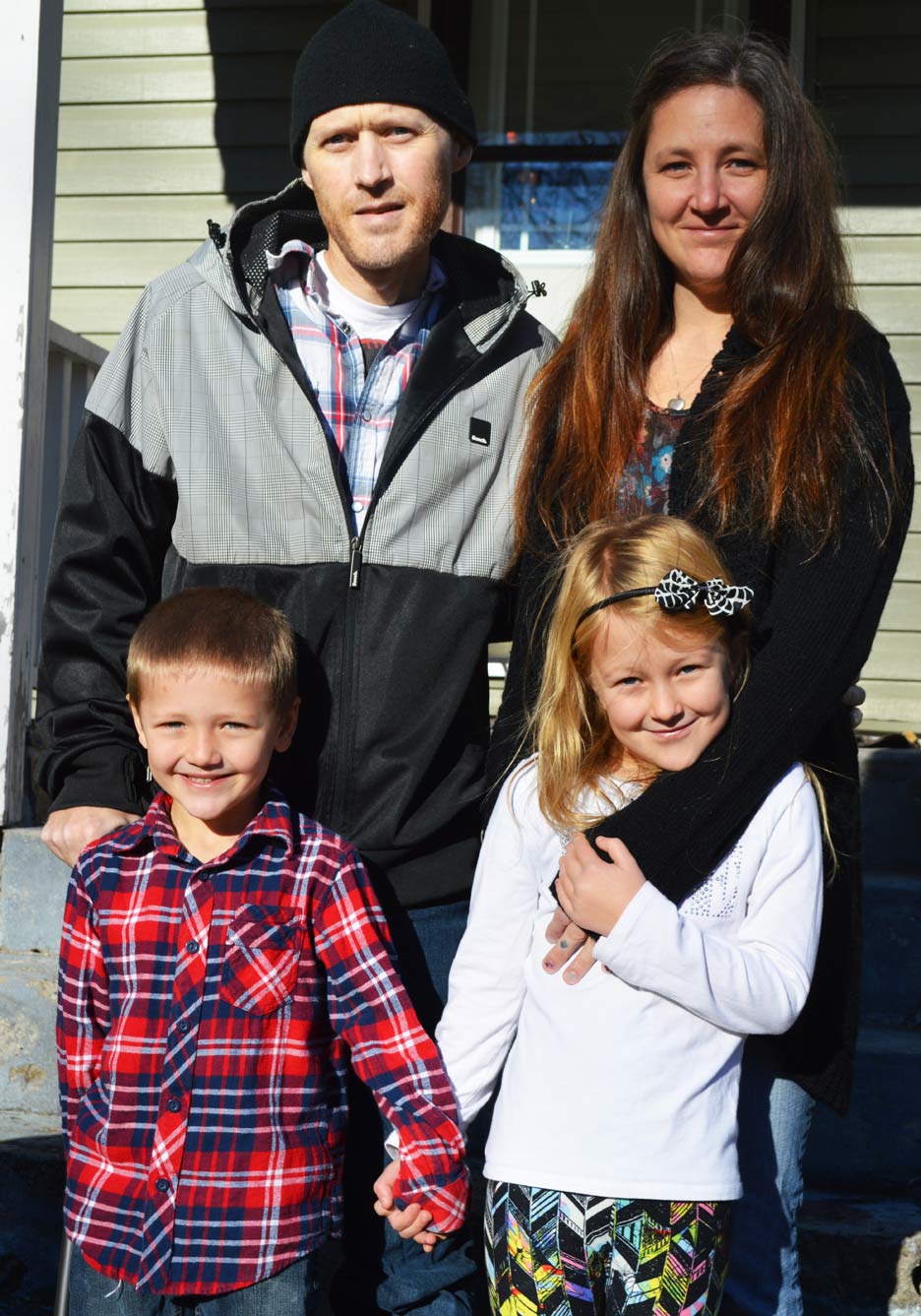 The ties that bind… 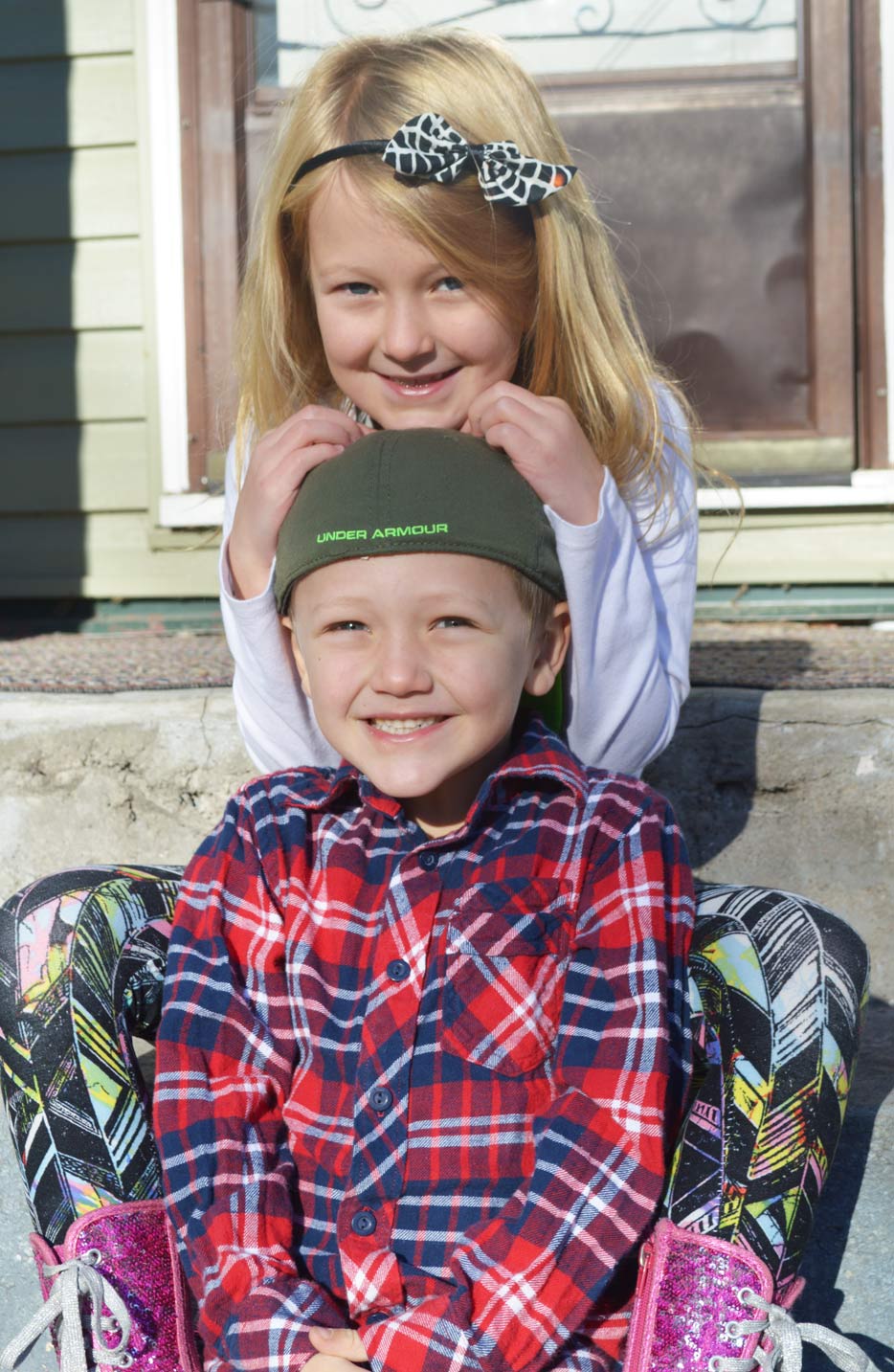 Piper and Lochlin ham it up for the camera.

MacDonald tells me people he doesn’t even know from the church his parent’s attend have helped. Whether it’s a homemade dinner, or a gift certificate, random people are constantly reaching into their pockets to help him. And that, he says, is extremely uplifting.

So what is MacDonald’s biggest fear when it comes to this disease that has utterly destroyed his life and taken away so much of his livelihood?

“Not knowing how this is going to pan out in the next year or two…I’m afraid of the unknown. Every test or scan we do, something new shows up. My biggest fear is not knowing where this rollercoaster is going to end…when and how.”

He has, however, adopted a motto that sheds light on days that can often seem grim and full of despair.

“Forced to fight, determined to survive. I’m forced to fight. I had no choice. This was 100 per cent not my call to get cancer. Really all I can do is survive as long as I can… until it finally takes my life, which it will, we just don’t know when.”

A trust fund has been set up at Scotiabank (account number 652760406481) for MacDonald. Donations are graciously accepted and will go to the costs the family faces with his ongoing battle with cancer.