You are here: Home / Community / Eye of the tiger: Meet Adrian Schmidt-Fajlik

This town is jam-packed full of extraordinary people! If you know someone who is walking to the beat of their own drum or has an inspiring story to share I want to hear about it! Shoot me an email at  laura.maclean@doppleronline.ca

It’s 9 a.m. on Tuesday morning. Adrian Schmidt-Fajlik has got beads of sweat rolling down his face. He’s been working out for the last two hours. His adrenaline is roaring before most people have had their first cup of coffee.

This routine is not unusual. In fact, it’s been the norm for the last two years. He often works out for four or five hours before he heads to the Huntsville LCBO for an eight-hour shift.

We’re at the 24-hour gym Adrian pays a lot of good money to go to and I’m apologizing profusely. I just made him lift a nearly 100-pound weight over and over and over again so I could take some photos. He assures me it’s no bother.

Prior to this incredible weight-lifting I’m witnessing, I watched him punch a speed bag. He did it so fast and with such precision the ball became nothing but a blur. He points out that it’s actually pretty deflated, the result of his repeated whacks to it. He uses it consistently throughout each workout and in between sets instead of resting. Sometimes, he just practices a new move on it. But he uses it a lot. He thinks it’s as awesome as I do.

He’s not tired. Not the least bit. He’s conditioned his body for rigorous workouts like this. He also did some crazy moves with an almost 125-pound weight where he held it up above his head while he kneeled down. And then he did what seemed like an endless number of push-ups first on a dumbbell and then with his hands cusped in front of him. He’s got all the gear: wireless headphones to pump beats that in turn pumps him up even more; he’s got on a Pink Floyd t-shirt and fluorescent shorts that bear the face of a ferocious lion. The shorts are everything. They are totally and completely symbolic of this ambitious 26-year-old. 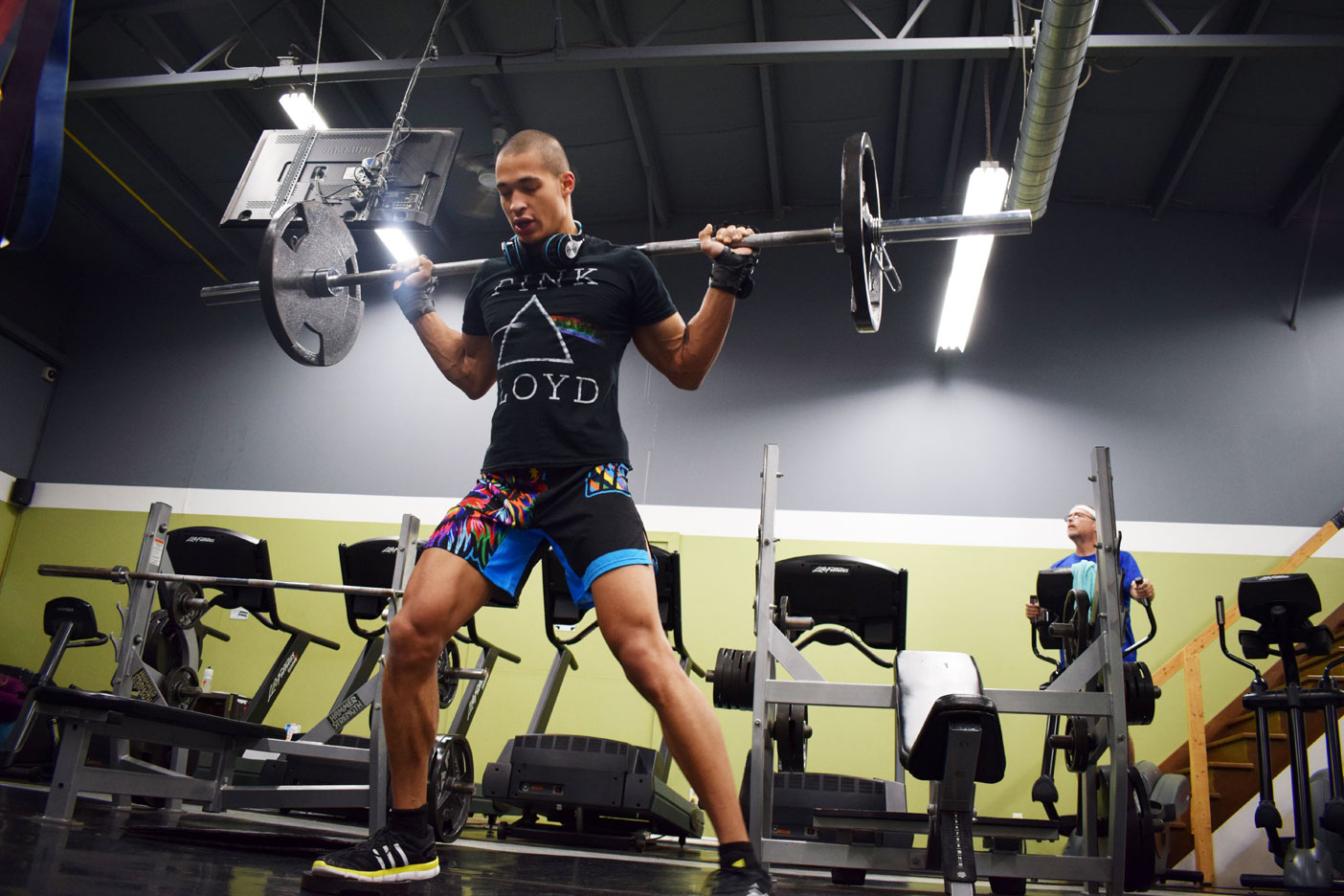 He’s got only seven per cent body fat on his 6’1 frame. All the strength of a big-ass man, he says. 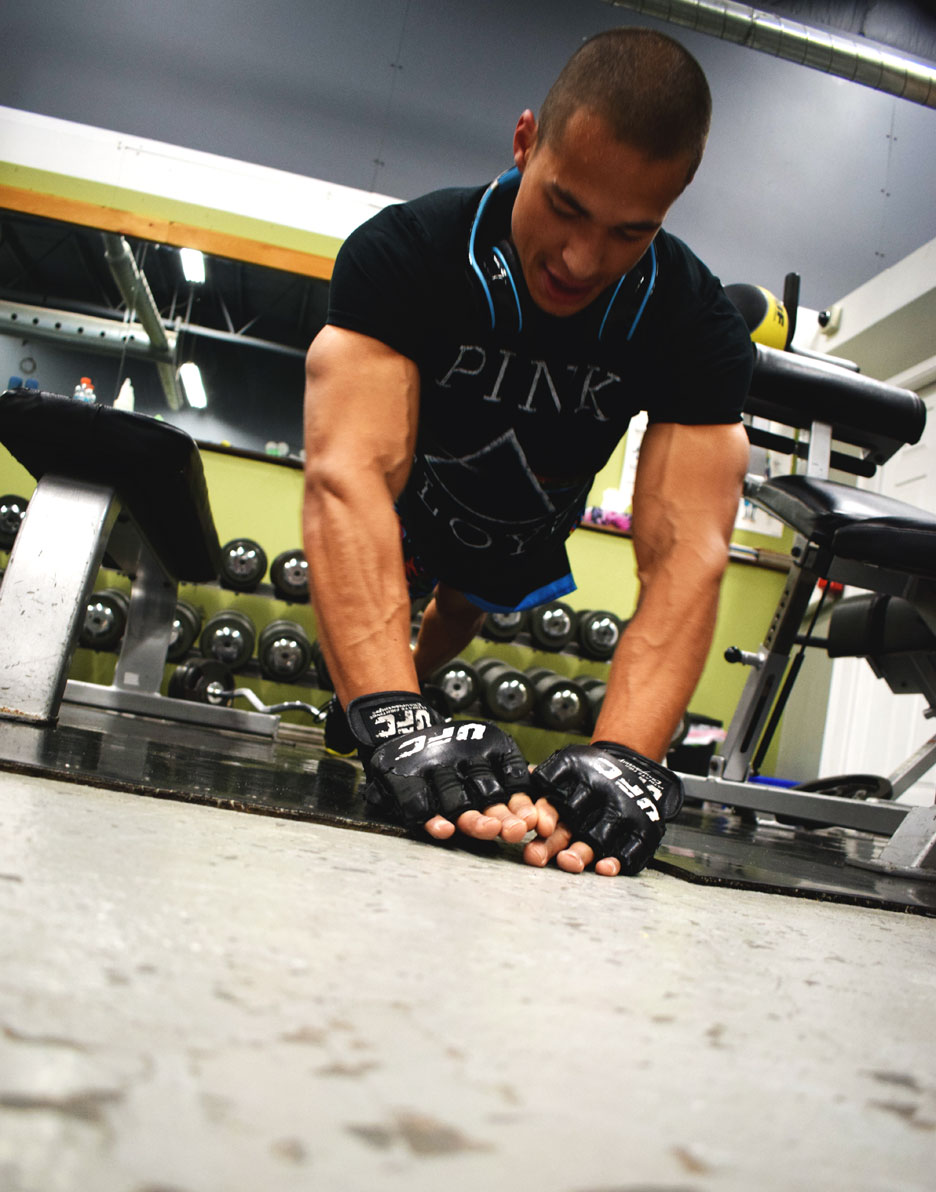 This kind of push-up is much more difficult than a traditional but for Adrian it’s no problem. 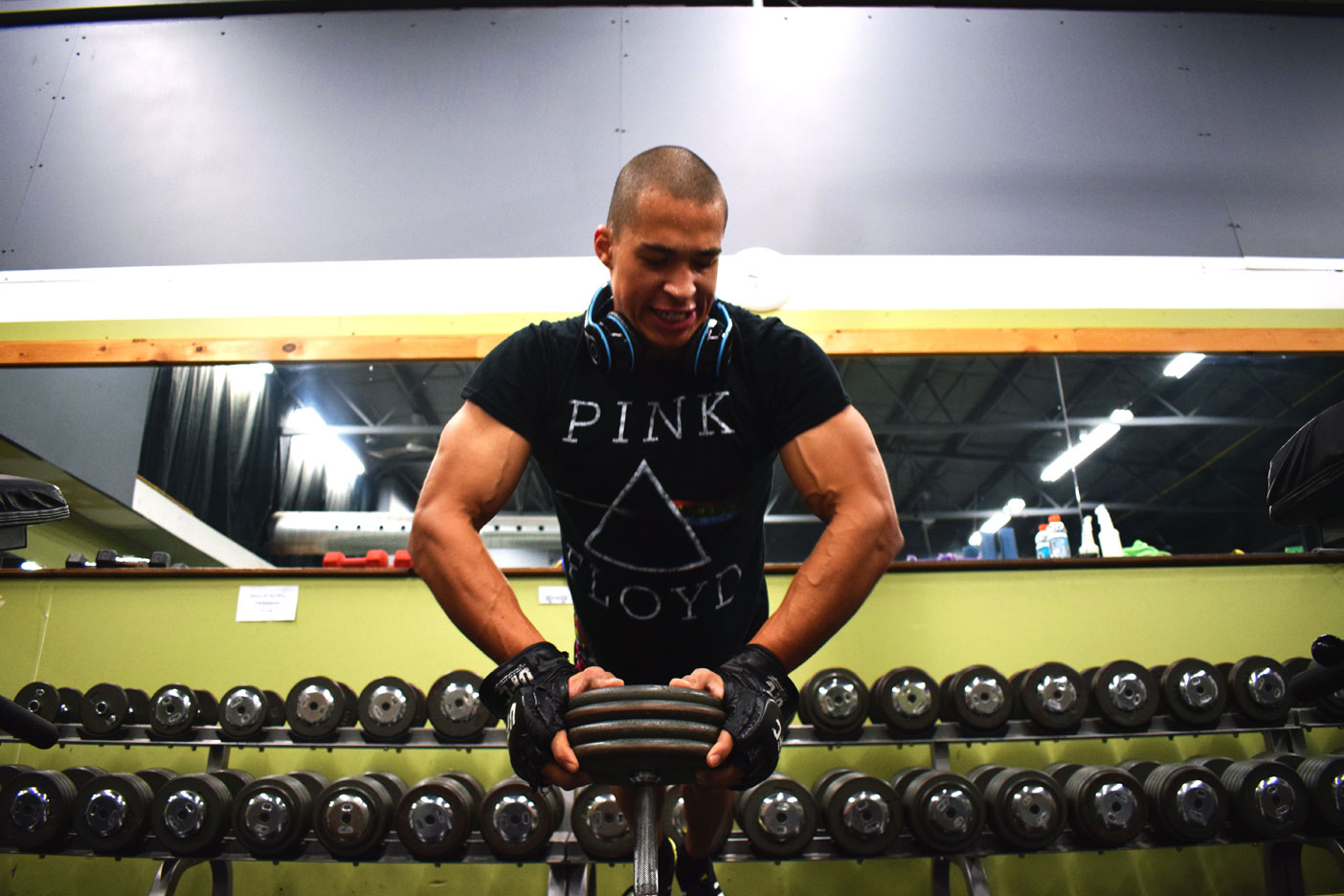 It’s all about breathing. That is huge in getting Adrian through his four-hour (or longer!) workouts.

I remember the first time I saw Adrian at the liquor store. Tall, dark and handsome; he was soft-spoken and always helpful and sweet. In my head I knew this guy definitely hit up the gym on the regular. I could just tell by his bulging biceps and perfectly fit physique. About a month ago, I finally decided it was time to ask him about  his buff bod. I laughed nervously as I sputtered out my question.

“Why are your muscles so big?’ You’re totally jacked. Do you go to the gym? What’s your story?”

Adrian didn’t mind my burning questions. He smiled and seemed humbled that I was asking.

“Training? For what?” I asked.

“To be the best MMA fighter in the world,” he replied.

I blinked and stared for a brief moment. What the hell was MMA? I asked him what that stands for and he told me. Mixed Martial Arts. Wow. My interest was piqued.

He nodded his head and assured me that it would only be a matter of time.

Practice makes perfect. That little statement packs a punch. Literally, when it comes to Adrian.

There isn’t a shred of doubt in his mind he will make it to the top. His positive mindset drives him. Constantly and consistently. He doesn’t need support or any kind of reassurance. This is his path. One day, he’ll be fit to fight. He’s just gearing up for that. He’s not cocky or egotistical and he’s not full of himself. He isn’t doing this for any sort of fame or fortune or ulterior motive or to be recognized or ogled. He’s merely confident in the notion you can be anything—do anything—if you believe in yourself.

Will power is so powerful. You can take it and apply it and you can literally achieve anything. I totally believe it and I’ve proven it to myself over and over again.

His training methods are hardcore. Adrian is copying “the highest form of Navy Seals training and pushing that.” He hits the gym every day; and usually it’s for four hours. And it’s there, at that 24-hour gym, that he does a regimented routine of weight lifting and cardio exercises. Everything he does is designed for strength and endurance. His fit frame can take a lot, but he admits he has pushed the limits too far and more than once. There are days when he is sore. Where his body aches and he is utterly and completely exhausted. When his mind feels gone.

“But I just look at that as reaching a new limit,” he says.

A big part of his training also entails being mentally strong as well. Take, for example, the cold therapy he practices. At first, he started by taking cold showers, as cold as he could endure for longer and longer periods of time. Then he challenged himself to swimming in the lake and never wearing a jacket in the winter. Sounds crazy but the practice has gained popularity for its health benefits. For Adrian, it always starts with a breathing technique.

“I can’t recommend that people do it but it’s like awakening a part of your body that’s been sleeping for a long time. We’ve sheltered ourselves by wearing sweaters and coats. It’s been proven to boost your immune system. I started two years ago and I haven’t been sick since. It makes your body extremely resilient and adds clarity to the mind.”

His intense workouts are almost always followed by a run. Sometimes it’s 20 kilometres, other times 30. He’s forever breaking down the barriers in his mind. That is such an important aspect of this preparation to become the best MMA fighter in the world.

“I’m always seeing what my limitation is and then breaking through it. But you have to listen to your body and you have to give it time to recover. The whole point of it is so that you’re constantly reaching a new level so that the next time you’re not getting broken down. You’re getting stronger and stronger.”

His deadline to complete his training is a year from now. That’s when all of his hard work will pay off. On his days off from the liquor store he usually drives to the city. He wants to find the best coach to train under so he’s willing to put in the time exploring his options. Travel distance does not matter. He’s already been to places like Stoney Creek and Niagara Falls. He’ll go to Montreal if he has to.

Every hour of the day is accounted for. There’s no wasted time. He carefully and mindfully carves out each day so he makes the most out of it. In between his full-time job and the hours he spends training he still manages to find time to do what he loves. Writing. Poetry is his passion. It has been for most of his life. He’s into writing hip hop lyrics. He loves hip hop music. Back when he was a city boy, before he moved to the quiet of Huntsville eight years ago, he used to read poetry in front of people at Spoken Word events.

But the one thing about this small town is that it has allowed Adrian to connect with himself. His true self. He’s aware of his surroundings and uses the peace and quiet to his advantage.

“You can learn so much from nature. You can improve your mind, body and spirit. It allows you to disconnect from your life… Cleanse your mind. There’s an ease of access to that here.”