Dave Coulson can talk to a dog without saying a word.

“They treat me differently than anyone else,” he says. “I’ve been doing this for a long time.”

He’s the owner/operator of Dave’s Dog House, a no-kill rescue centre out Hwy 60 at Hillside. Basically, he’s like the dog whisperer. He takes aggressive dogs, makes them nice and then finds them a forever home. His goal is to keep them “out of the system.”

Since he opened his doors back in 2015, he has re-homed more than 40 dogs and helped train more than 150. He’s a helping hand to other rescue organizations that can’t find homes for dogs. He has a lifetime of experience under his belt. And here’s the remarkable twist: he does it all for free. His love for our furry, four-legged companions overrules the dollar. Plus, he’s big on karma. What you give, you get back. He has a lot of faith in the way things unfold.

“I’m a weird guy who believes as long as I stay on the right path, everything I need will come to me,” says the 56-year-old. “And somehow I always end up getting what I need.”

Dave figures that people will be more inclined to get their dog(s) help if there isn’t a cost associated with his assistance. And that probably just coincides with the simple fact that he genuinely cares about the fate of even the most hostile canine. Honestly, Dave has never been one to ask for anything. Especially when it comes to money. He even shies away from fundraising for Dave’s Dog House. He knows he should. But he just can’t find it in his heart to ask. 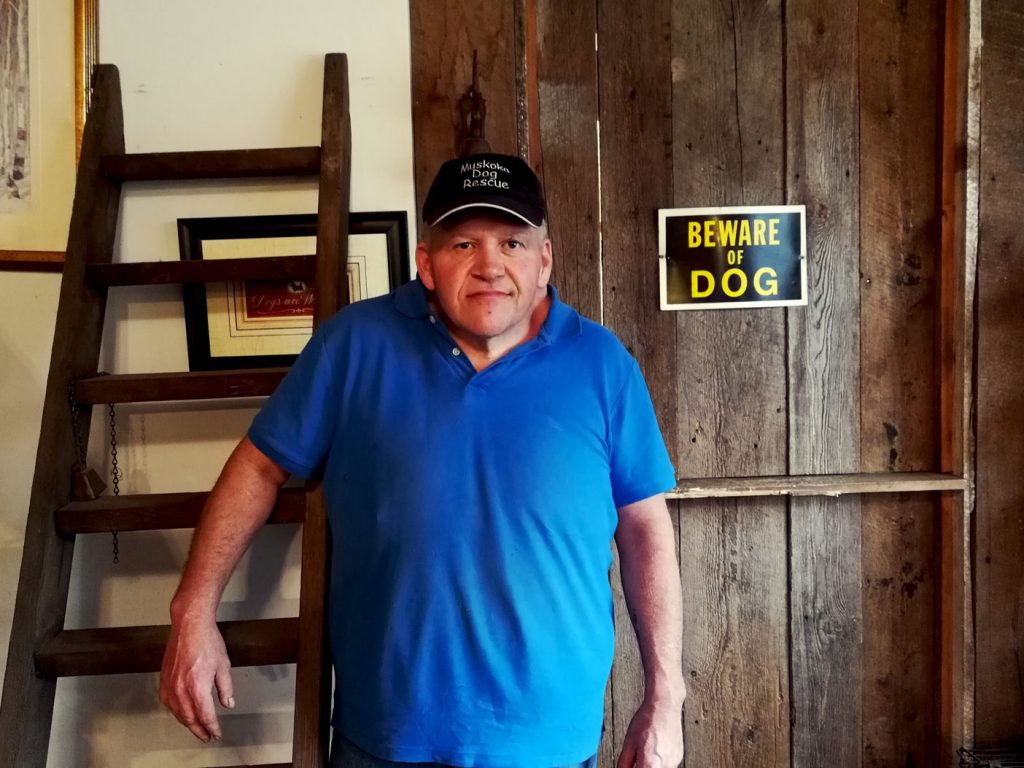 He wants people to be able to live in harmony with their beloved pooches. Most importantly, he wants the human to be in control.

He’s there for anyone who has a snappy pup or unmanageable senior. The only rule Dave has is that if you’re going to ask for his help, you follow his advice. If you don’t, he’ll ask that you hand the dog over to him so he can successfully conquer its behavioural problems at his home. And that has happened many, many times over the past two decades.

Right now, there are 11 dogs around me waiting for me to tell them what to do. They read my body language and they listen to the sound of my deep, loud voice. I have four that I’ll never find forever homes for because they wouldn’t be compatible with anybody else, unless someone has experience like I do.

He has plenty of success stories. He could call 50 people and they would attest he saved their dog. The saying ‘third time’s a charm’ doesn’t apply. There is no third visit. Often one, sometimes two and he has made his mark. 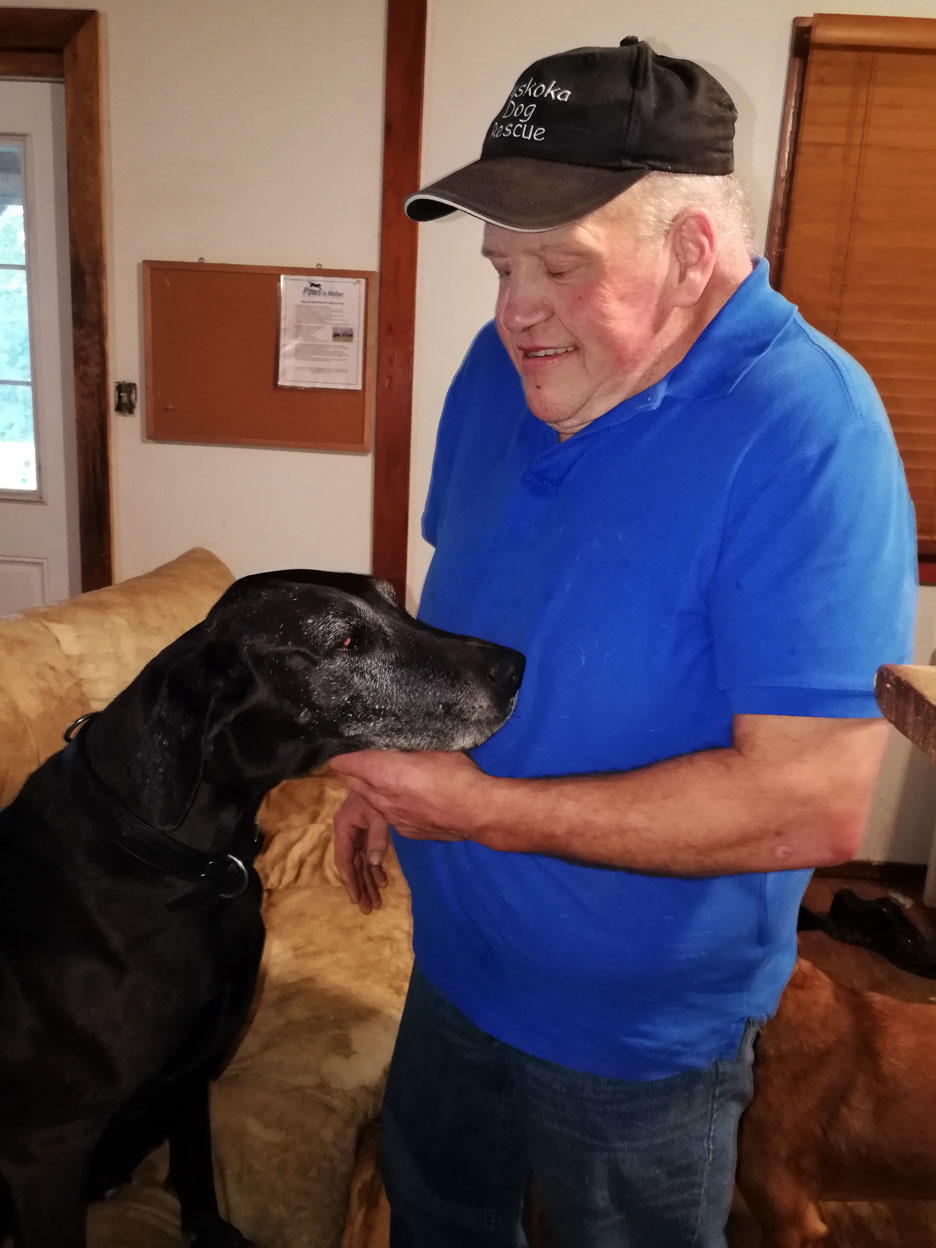 His beloved Julianna, a Great Dane/Doberman mix, was surrendered to him for being aggressive. She is his baby and he will never give her up. 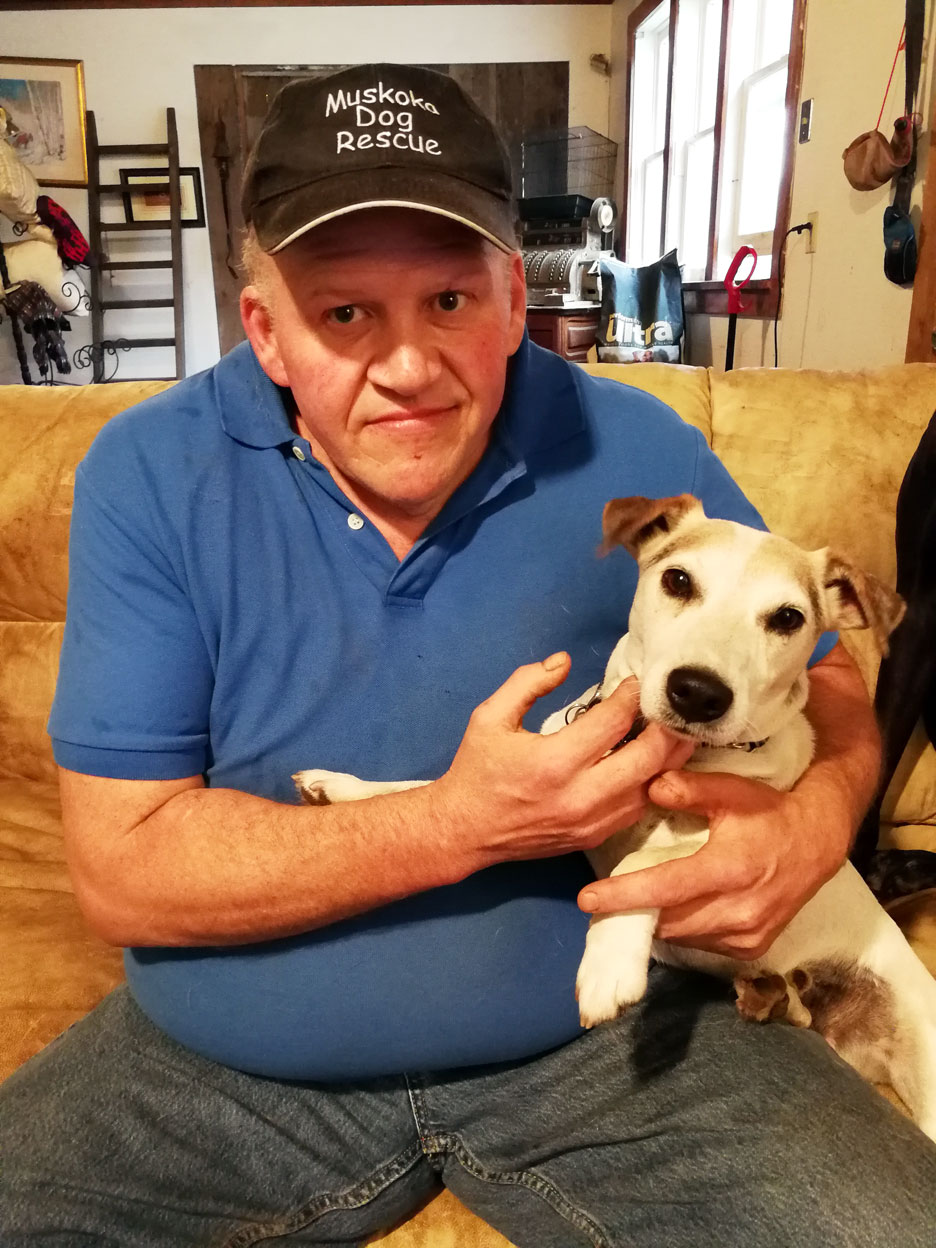 Meet Jack. He was surrendered to Dave from concerned people who didn’t think they could take care of him. Dave thinks he’s going to keep him, as he recently lost his Jack Russell Terrier. 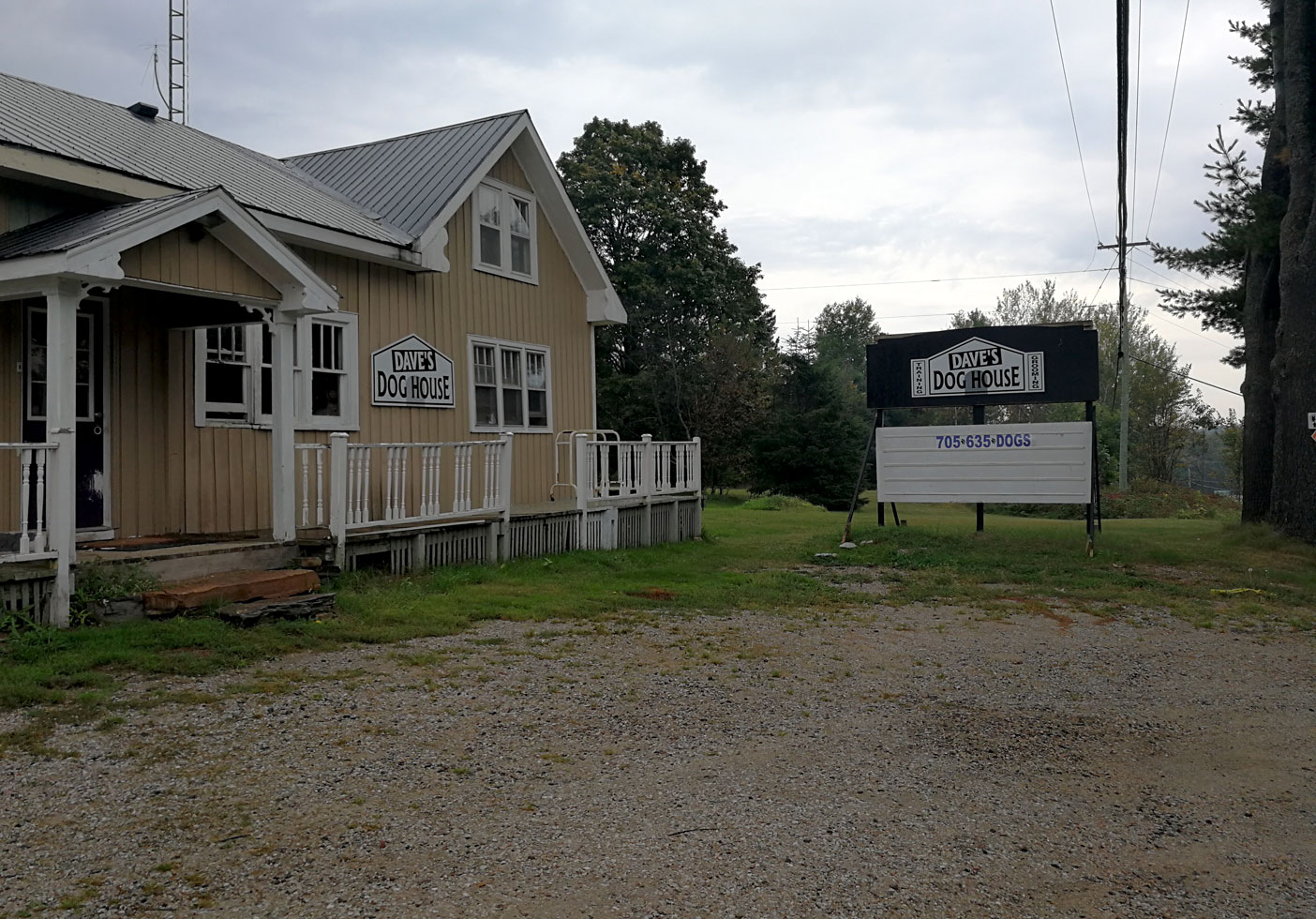 Dave’s Dog House is out Hwy. 60 in Hillside. 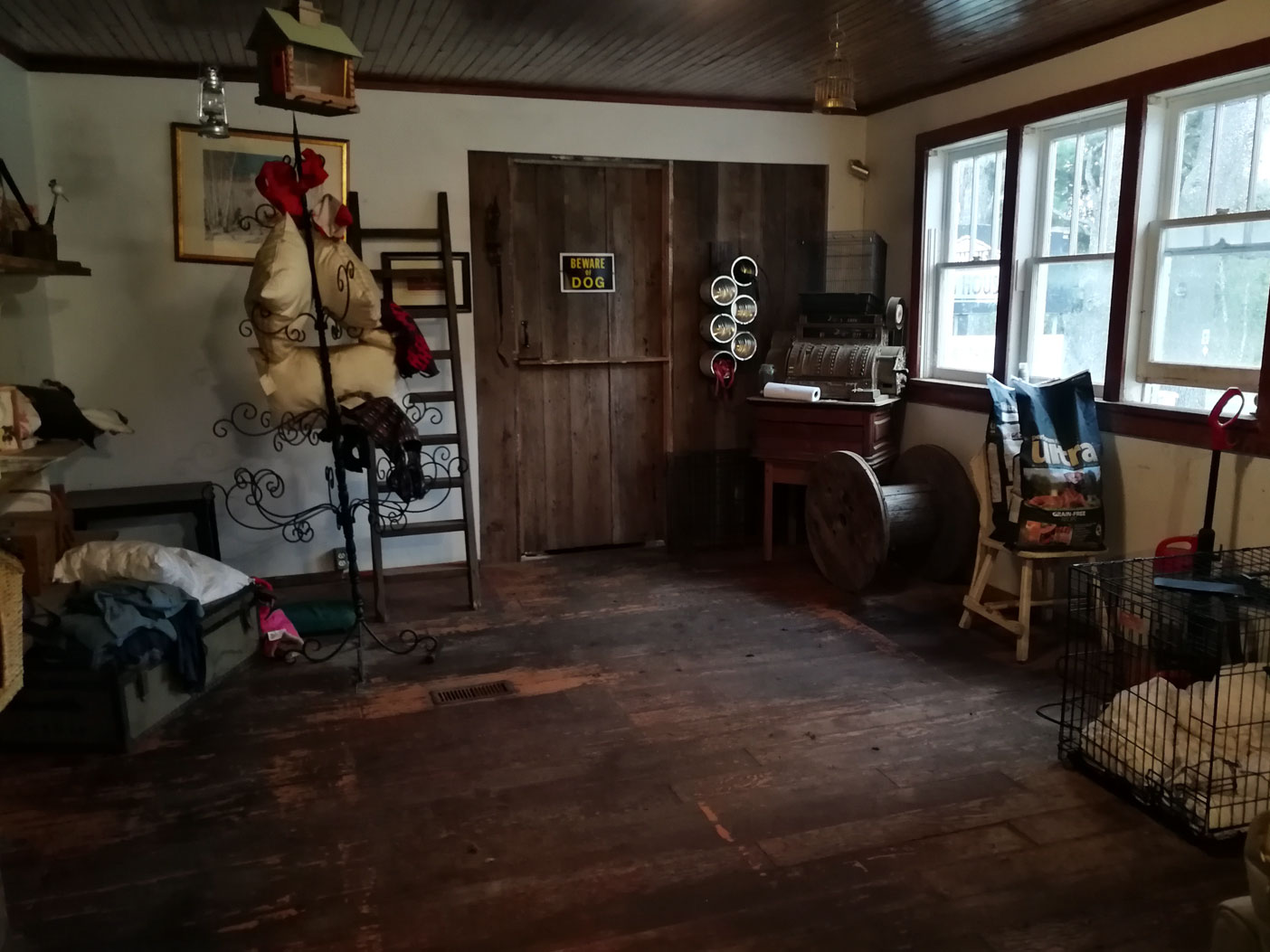 The dogs have lots of room to roam inside and there’s a fenced area outside for play. Dave spends almost a half hour every day petting each dog that’s there. And there’s 11!

Dave’s currently helping a young couple from Gravenhurst with their 16-week-old coon hound who’s just “full of beans.” Another dog he made nice just went home to his owners. He spends his days visiting people who have made a call for help and loving the dogs that are in his care. He has seven of his own. One he has never left for longer than a few hours.

My number one rule I profess for anyone who gets a rescue dog is do not feel sorry for it. Dogs can sense that. They sense weakness and therefore take the upper hand.

Some of his tips might take you by surprise, but if you have a dog that bites, doesn’t like to listen and is highly aggressive, you’re going to want to follow Dave’s simple rules. The style in which food, water and walks are administered are the key aspect to constant respect “in the pack”. Spitting in its food to leave your scent, only feeding it once a day (at night) and never feeding the dog at the same time or in the same spot on the floor will teach it some self respect and, in turn, the dog will learn to respect its owner as well. These techniques are only used until you have the dog you want, says Dave.

“Another thing I’m going to tell you is to ignore the dog, which will be the hardest thing in the world,” he says. He knows how people like to humanize their animals. “It shows the dog you’re dominant. You don’t show any emotion that creates weakness in you. That’s when the dog loses respect. What one person considers is mean, the dog considers it as dominance.”

His remarkable ability to make a bad dog good again is indeed a rare gift and it’s one that comes from within. He’s naturally a calm person, and dogs can sense that. He grew up on a farm in Orangeville and spent his youth surrounded by 50 corgis, one of the only breeds that fight until the death. He learned from a young age how to have the upper hand. His mother, who was an active member of the Canadian Kennel Club, shared her knowledge with him. Some basic psychology combined with consistency will reap serious rewards when it comes to training a dog.

“Everything my mother taught me about dogs is common sense. And I have zero vet bills, because of my way of thinking and because of how I treat the dogs.”

Dave’s understanding and unconditional love is having a profound effect on the local dog community (and on humans, too). Indeed, he has his work cut out for him. One dog leaves his side, completely transformed, another one is sent to him. He hasn’t taken a holiday in over 20 years and he has no intentions of taking one any time soon. He says he doesn’t really care about getting away. He doesn’t need to disconnect from what he’s doing. It makes him happy.

“To me, dogs are family. I live with them, eat with them. I play with them. They are my family.”