You are here: Home / Sports / Chad Barber had to abort Yukon Arctic Ultra, says it was ‘a fantastic experience’

Mother Nature has her “rules” which she enforces consistently and dispassionately. Chad Barber violated one of her rules and she asserted herself causing him to abort his attempt at the Yukon Arctic Ultra (YAU) marathon with only seven miles to go.

“I ran out of gas,” explains Chad. “Over the last 60 kilometres of the race, I was feeling very strong. I had beautiful weather and I was enjoying the trail so I was pushing the pace. Unfortunately I made a poor judgement call and went against my plan of taking a break with 30 kilometres left in the race to rest and eat an expedition meal. Instead I chose to continue moving and eating my smaller foods as I moved, and with seven miles to go in the race, I totally ran out of gas.”

Mother Nature demands that “calories out must equal calories in” or the body’s systems will shut down.

Chad describes what it means to “run out of gas” and why he had to abort:

“I quickly felt drained, and when I stopped to get a thermos of water out of my sled bag, I noticed my legs were feeling weak and trembling. In any other race, this would likely be no big deal, and I would continue to eat and drink and move forward at a slower pace. However in this race, I was tired, the weather was getting very cold very fast, and I knew that I was isolated and that the next race competitor was likely three hours behind me. I had been moving for nine hours straight without seeing another person (competitor or race volunteer). With these factors playing a major role in the mindset, a small issue can become a major issue in no time. The situation can escalate in a hurry and the consequences can be quite significant. I went from a racing mentality to a survival mentality. For those reasons I knew I had to hit the help button while I was making rational decisions and had the ability to keep myself warm and safe until the snowmobile guides arrived.”

Chad was taken out by snowmobile, checked out by the medical team and given a full medical release.

He knew weather would always be a huge consideration. Chad describes the weather conditions. “The conditions during the day were ideal. Mild, no wind, and blue skies, but the temperatures dropped significantly at night which made it tough for competitors. Some low lying sections of the race were close to -40°C.”

He was not the only one to be scratched from the race. “Many racers were scratched due to frostbite, and several were scratched due to exhaustion from the conditions of the course,” explains Chad. “The first 30 miles follows the Yukon and Takhini rivers, which is normally hard packed and icy so it’s the fastest and easiest section of the race. This year the entire trail was snow covered with soft and loose snow, making footing very difficult, and adding more resistance to the sleds we were pulling behind us.”

Although he was deeply disappointed at not being able to cross the finish line he received a wonderful surprise at the finish. “My wife and her sister surprised me and flew to the Yukon for the race finish. Although it was extremely tough to not cross the finish line after she came all that way, it was great to have her there for support after my race came to an end.”

Chad’s wife Laura describes their reunion at the finish line. ”The next thing we knew he arrived at the finish by snowmobile. We were surprised to see him and, in that moment, a bit worried about why he arrived by snowmobile. But I knew he was okay. Knowing what he put into this race I knew how much it meant to him to complete it so, I guess in the moment I saw him, my heart sank a little for him knowing that he wanted to cross that finish line on foot. The first thing I did was hug him and tell him that I am so proud of him. Overall the feeling when I saw him was pride and happiness that he was there. What he achieved was incredible and I was thankful that he was safe and made the decision to put his safety first. I was also hopeful that he would feel the same pride in himself that I did in knowing what he achieved.”

His kids were equally supportive of their dad. “My eight-year-old told me that it doesn’t matter if I finished or not, they were still proud of me and would love me no matter what,” recounts Chad. 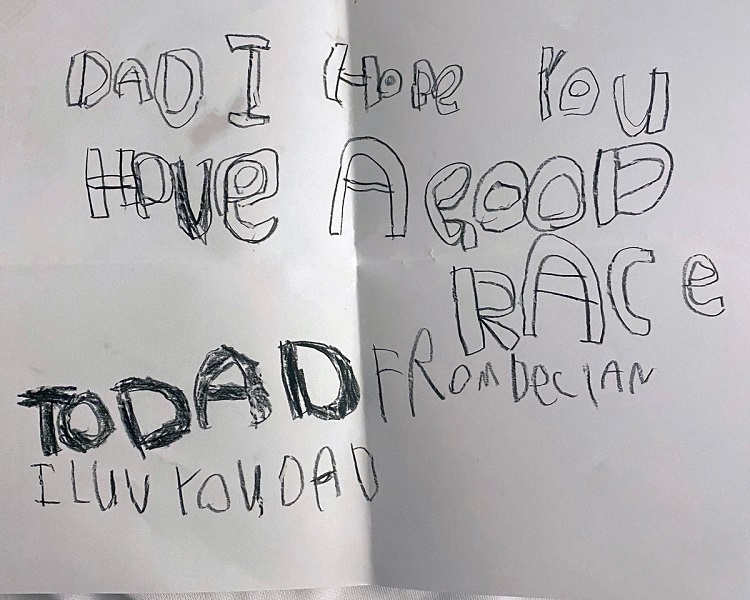 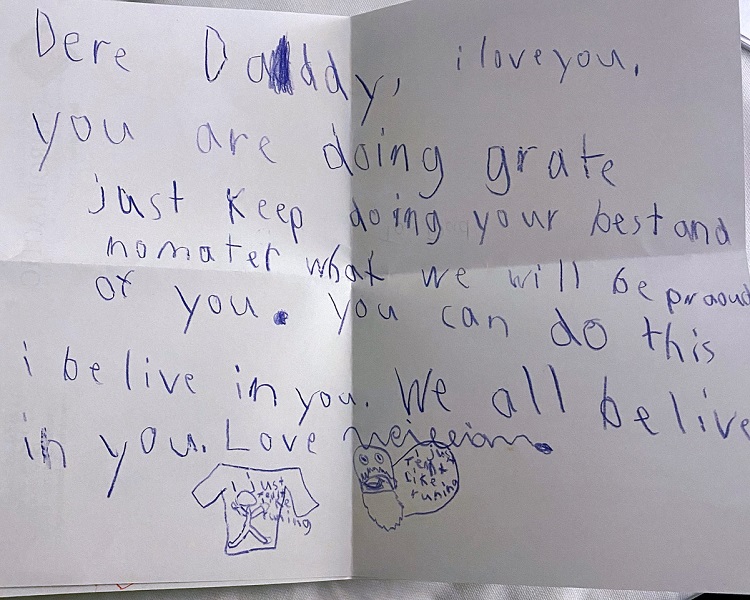 Above: Words of encouragement from Chad Barber’s children (supplied)

In retrospect, Chad believes he was well prepared physically and mentally although, not having experienced a similar kind of race before, “I don’t think anybody could actually prepare for the mindset you are in when you are completely isolated, remote and exhausted,” explains Chad. And, he was very well-served by the clothing and equipment he had.

Was it all worth it?

“I had a fantastic experience. I met great people from around the world including Sweden, Germany, Spain, Denmark, Ireland and Amsterdam. The trails were fantastic, the scenery was spectacular, and we had the bonus of watching the northern lights as we raced through the night,” says Chad.

“I believe you have to constantly challenge yourself to do things that scare you or seem nearly impossible in order to grow and find out what you’re truly capable of. This race was the ultimate challenge. I learned a lot about myself and what I am capable of. In this extreme event with world-class athletes, at the point I hit my help button, I was in third place and on pace to finish in second place.”

Would he do it again?

Chad feels the race is “100 per cent doable” for him and is already speaking about “if and when I do it again.”

And a final word from Chad. “Over the past few weeks, I have been overwhelmed with the support I have received from people across Muskoka. I have literally had hundreds of messages from friends, family, and even people I’ve never met. I truly appreciated every single message and it really made me feel like the entire community was behind me during the event. I just wanted to say thank you for that.”