You are here: Home / News / Canvas Brewing Co. launches its first beer in time for summer, with more to come 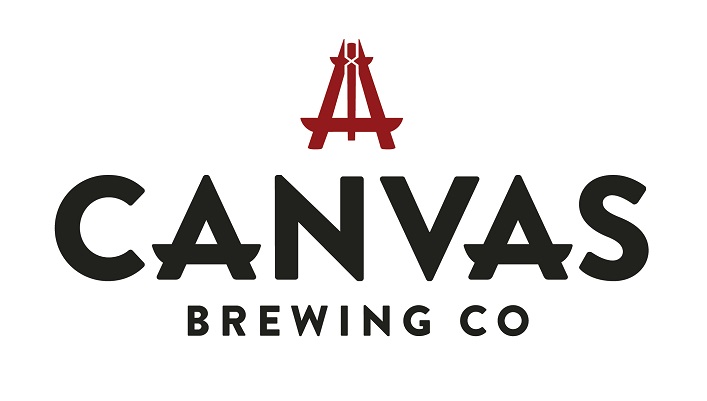 Something new is brewing in Huntsville.

Later this year, Canvas Brewing Company will open in the former Dollarama location at 12 John Street. In the meantime, it has already produced its first beer, Canvas Kölsch, brewed offsite.

“The style is from Cologne in Germany,” says brewmaster and co-founder Jeffrey Woodworth. “It’s a lagered ale―it has the flavour of an ale but finishes crisp like a lager—so an easy-drinking, well-balanced beer that anyone can really enjoy.”

He and Canvas Brewing Co. president and co-founder Steve Koncan will launch the new brew at the Muskoka 2/4 Craft Beer Festival this weekend (Saturday, May 19 in River Mill Park). Through the summer it will be available at local licensed establishments.

“We can’t wait to add our craft beer to the growing arts scene in Huntsville. We want this to be our contribution. It’s our creative outlet,” says Koncan.

The pair grew up in Huntsville and played hockey together. They both spent time living in Scotland. And it was over a beer that they started talking about opening a brewery in their hometown.

Construction is underway at the new location, where they plan to have an 80-seat taproom with 20 taps of primarily their own brews.

“We’ll have the capacity to brew a variety of different styles,” says Woodworth, which could include barrel-aged beers, porters, stouts, barley wines, IPAs, Belgian beers, saisons, lagers, and blonde ales. “Our goal will be to have a beer for everybody. We’d also like to bring in guest taps, and collaborate with other breweries not just in Ontario but we’d like to go as far reaching as we can and bring the craft beer world to Huntsville.”

The plan also includes a 3,200 sq. ft. event space, 750 sq. ft of which can be closed off for private functions. The brewery will also have two patios, one facing John Street where the new entrance to the building will be, and a rooftop patio with views of the Muskoka River.

“I grew up in Huntsville and it’s a dream come true to be able to do what I love, brew beer, and give back to the town we call home,” says Woodworth. “The riverside location in the heart of downtown Huntsville is a perfect spot for locals and cottagers.”

True to its name, Canvas will offer a large space—its east-facing exterior wall—for a rotating mural painted by local artists. They are accepting proposals now and hope to have the first mural completed this summer.

“We are very excited to make an exterior wall of the brewery available for a community art project. We want our brewery to be a canvas for local artists,” says Koncan. “This artwork will be changed year to year for as long as we have interest in the project.”

The pair say their aim at Canvas is to both celebrate local landscapes and highlight the vibrant arts and trades community.

“We hope Canvas becomes a hub for the community, not just for great locally crafted beer,” says Woodworth, “but also as a gathering place to enjoy local art, music and community events.”

More details can be found at canvasbrewing.com.