It will make you laugh. It might make you cry. You may even squirm in your seat a little.

Those who attend The Vagina Monologues will be captivated by an all-star cast that features a slew of local talent. Robin Clipsham, Pru Donaldson, Amy Bridle-Phillips, Emma Gibbs, Karen Thorn, Greg Perras and Jeanine Spring have teamed up to bring Eve Ensler’s play back to life in a new and refreshing way.

“We’re going to talk about a lot of things, but all of it’s about the vagina,” says Spring, who co-directed the play alongside tech director Bridle-Phillips.

Muskoka Parry Sound Sexual Assault Services (MPSSAS) executive director Lauren Power produced it and Spring indicates it’s really been a collaborative effort to bring an idea to fruition and a labour of love for all involved.

And this is not a play men should shy away from. In fact, Spring encourages men to seriously consider coming out to see it, as they will leave with a better understanding of women.

Any man I’ve been talking to will agree that feminism is a term that came from the 1960s when women first started to take a stand. Men are feminists now. If you believe in equality for race and gender, then you are a feminist. You’re not an activist.
Jeanine Spring

The Vagina Monologues aims to bring awareness to sexual assault in general. It blends comedy and tragedy on the stage as well as love and disgust, and combining those elements, says Spring, are the ingredients for some of the best plays. In other words, the audience will be laughing hysterically one moment and then possibly weeping.

This is the second production of an Eve Ensler play MPSSAS has used as a fundraiser. Two years ago, The Good Body helped raise funds for the organization and a portion of the proceeds also went to the YWCA.

“I think it’s an important play to see because of the current situation that has been coming forward over the last year since the Jian Ghomeshi trail,” said Spring. “When he got off, there was an outcry. People were disgusted. And where I work we saw a huge increase in the number of crisis calls. It’s like a trigger went off.”

The Vagina Monologues opens tonight in Parry Sound at the Stockey Centre, and plays November 10 at the Algonquin Theatre – with a gala reception beginning at 7 p.m. – and November 17 at the Gravenhurst Opera House. Tickets to the Huntsville show can be purchased online at algonquintheatre.ca or by calling the box office at 705-789-4975. 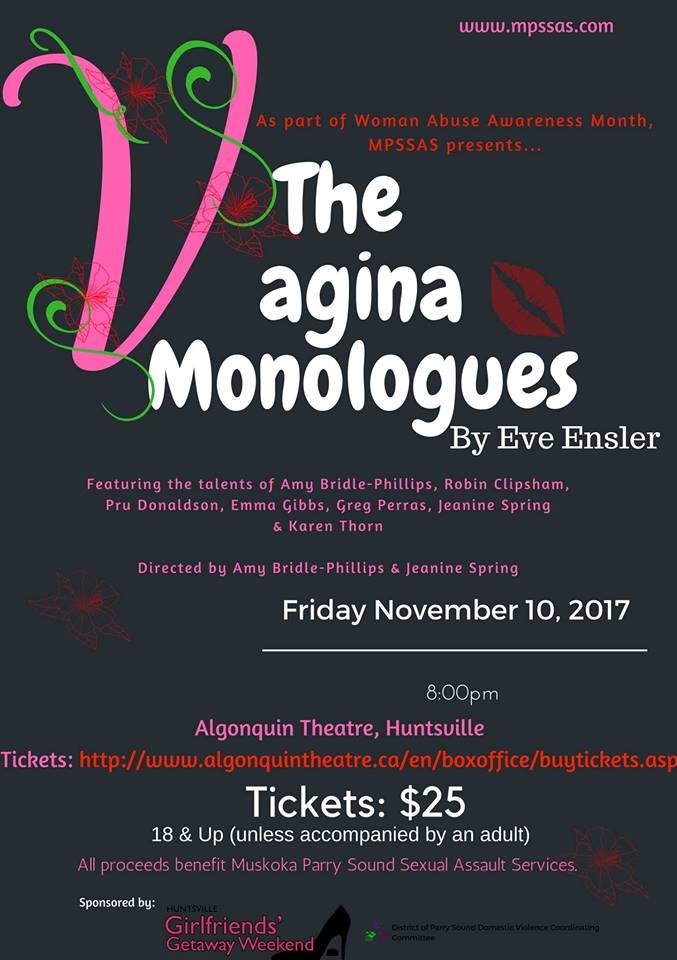 Lots of people turned to birdwatching during the past year, seeking enjoyment and relaxation. […]

Bonnie Boyd has been running a home daycare in Port Sydney since 2012. But […]

Of all the musical gifts bestowed upon the human family, the most precious, […]