You are here: Home / Commentary / Of course all lives matter: obviously that’s not the point – Opinion

Recently, the Canadian group The Tenors were given the honour to sing our national anthem at the MLB all-star game in San Diego. One member took the opportunity to change the lyrics from ‘With glowing hearts we see thee rise, the True North strong and free!” to “We’re all brothers and sisters, all lives matter to the great.” He held up an All Lives Matter sign to the crowd.

Although worthy of a head shake, this controversial act could be easily brushed off as a single case of ignorance and white fragility. What is truly concerning to me is the number of comments I see locally on social media that follows suit with the sentiment of All Lives Matter.

All Lives Matter is essentially a spin on Black Lives Matter: an important and widely effective movement that works to peacefully resist violence and discrimination against Black folks. All Lives Matter was borne from the idea that Black Lives Matter was being too ‘Black-centric’. The elementary concept that all lives matter is undisputed. The issue is that from a current cultural, political, and institutional standpoint, black lives do not. Pushing for the awareness of the value of a life living within a Black body does not mean that we are negating the value of a life living within a White body.

Seth Myers currently holds the spot for being the creator of my favourite analogy of the phenomenon of All Lives Matter. He compares an All Lives Matter advocate to someone who sees a ‘We Sell Lottery Tickets’ sign outside a convenience store and stupidly assumes that the store sells only lottery tickets. Yes, black lives matter, and yes the store sells lottery tickets, but the store also sells other things, and other lives still matter.

As someone who has lived in Muskoka for the entirety of my culturally conscious life (I moved here from Switzerland when I was four), I have been so immersed in White culture that I did not even notice the absence of Blackness. Thinking back to my favourite TV shows and movies as a child, they almost exclusively contained White bodies.

When there were Black characters, they were often shallow roles: sassy, theatrical side-characters with their ‘Blackness’ used for comedic effect; or the ‘magical negro’ black men that seemingly appear out of nowhere to aid the white character with some special talent or skill (think Morgan Freeman); or they played thugs, pimps or thieves. Although there are exceptions, Black characters are almost only allowed into the North American mainstream media if they are light-skinned (unless thugs, pimps or thieves) and fit these stereotypes that are palatable to a White audience.

Conversely, we have reached a point in White culture where we are appropriating Black culture even as we appear not to understand or respect it. Kylie Jenner sports cornrows; terms like “ratchet”, “on fleek”, and “bae” are riddling the captions of our youth’s Instagrams and Snapchat stories; everyone is twerking; and I counted four dashikis on White people at the Pride BBQ and Midnight Madness two weekends ago.

In a utopian world in which every human is given equal opportunities and treated without racial bias, this exchanging and fluidity of culture would be perfectly fine, perhaps even beautiful. Except this is our world and it is 2016 and Black folks are still being shot dead for next to no reason at all.

And we, White people with our Black-appropriated clothing, hairstyles, slang and music, are running off the streets and into Starbucks, bumping our heads to hip-hop and treating ourselves to pumpkin spice lattes, too willfully ignorant to stand in solidarity with those whose culture we love so much.

Before jumping on the All Lives Matter bandwagon, we need to recognize that a Black person’s experience of the streets and the workplace is much different from a White person’s. Every time we rep ‘All Lives Matter’ or rave about ‘reverse-racism’ or say that ‘we don’t see colour’ in response to Black anger, we are silencing Black folks. Every time we deny the existence of the racism within our culture, we are contributing to the problem. 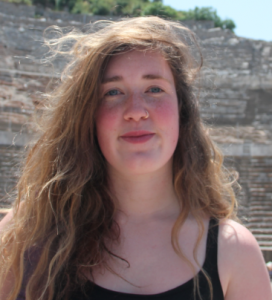 Note: In this article, I am only speaking to racism towards Black folks perpetrated by White folks – this is a rather short article and thus must have a narrow focus. I wish to acknowledge that many other types of bodies also face oppression within our community.

I am a 20-year old liberal arts student with an affinity for fluffy dogs and fluffy facial hair. I consume almost exclusively breakfast foods and chocolate. I enjoy exploring new places, yoga, chasing and capturing virtual creatures on my phone, painting, and lying in the sun. Obsessed with Sylvia Plath, Audre Lorde and Adrienne Rich.