You are here: Home / Community / The birds and the bees (and fish, too): Meet Heather Van Duuren

A picture is worth a thousand words.

Heather Van Duuren was around six years old at the time that it was taken. Perched atop her head is a monarch butterfly. She has that look of innocence, only seen in children who haven’t yet been tainted by the stresses of growing up and becoming an adult. If you look closely at her beautiful brown eyes, you can just tell she’s intrigued that this magnificent little creature found the perfect spot to rest its wings. She was captivated by nature then, and now, at 33, that wonder and enthrallment hasn’t lost its momentum.

Really, Heather hasn’t changed a bit, except now she’s a whole lot smarter and more aware of what’s going on. She knows nature is struggling. Every day precious ecosystems are destroyed, and that inevitably leads to the destruction of habitats for the birds and the bees and all creatures great and small. Whether they are furry and four-legged or winged and bug-eyed with antennas, it doesn’t matter to Heather. She has an affinity for animals. And when it comes to her love for the planet, she hopes that by doing what she loves to do and sharing it with people, it will have a positive impact even if it’s a small one. That matters to her greatly. And the only thing she can do to ensure her seven-year-old son does the same, and grows up with the same morals and respect for the environment she did (and does!), is to lead by example. Heather says he’s already a nature nut, just like his mom.

She’s a wealth of information when it comes to anything she’s passionate about. Birds, horses, what kind of native plants and shrubs you should plant on your property if you want to attract an abundance of wildlife, including insects that aren’t as pesky as they are beneficial. If she wants to know about something, then she follows through with research, and that, in turn, ignites a desire to want to share that knowledge. Her Facebook posts are all relevant: David Suzuki’s message that Canada must ban the use of neonicotinoids, four things you can do to save the monarch butterflies, tips on perennial garden must-haves, and a wonderful message for humanity from Dr. Jane Goodall. And then there’s this eye-opening article on the horror native pollinators are facing with loss of habitat and what we can do to help save them. Heather actually wrote it. She believes we need to be doing a lot more to protect the thousands of dwindling species we are carelessly killing every single day. But the difference between Heather and so many people is that she is trying her best to do something about it.

“If every homeowner made an effort to plant a patch of native perennials or even one native flowering shrub, together we could change this fragmented landscape into one large connected garden. A paradise for life to feed on,” she wrote in her story. Which, by the way, is to-the-point and bang on when it comes to not only insect extinction but our own demise if “we don’t wake up and care for the only complex ecosystem that we have. We are not the only creatures that need space and sustenance on this planet and its high time we stop treating it as if we are.”

Heather has turned her beautiful Huntsville property into a little piece of paradise. She’s planted all the right native shrubs and trees and wildflowers for wildlife to thrive on. It’s two-fold: she gets the chance to see the animals come back year after year and the animals and insects will actually stand a chance of surviving. She knows about the negative effects deer feeding is having on the ecology of our local forests. Cedar trees aren’t regenerating anymore; as soon as a seedling starts to grow deer will eat it. Unless dogwood trees are above reachable height, the deer are going to eat that, too. And dogwood is essential to many of the pollinators. She doesn’t agree with feeding the deer. It’s not healthy for them and it’s destroying habitat for countless other species as well. 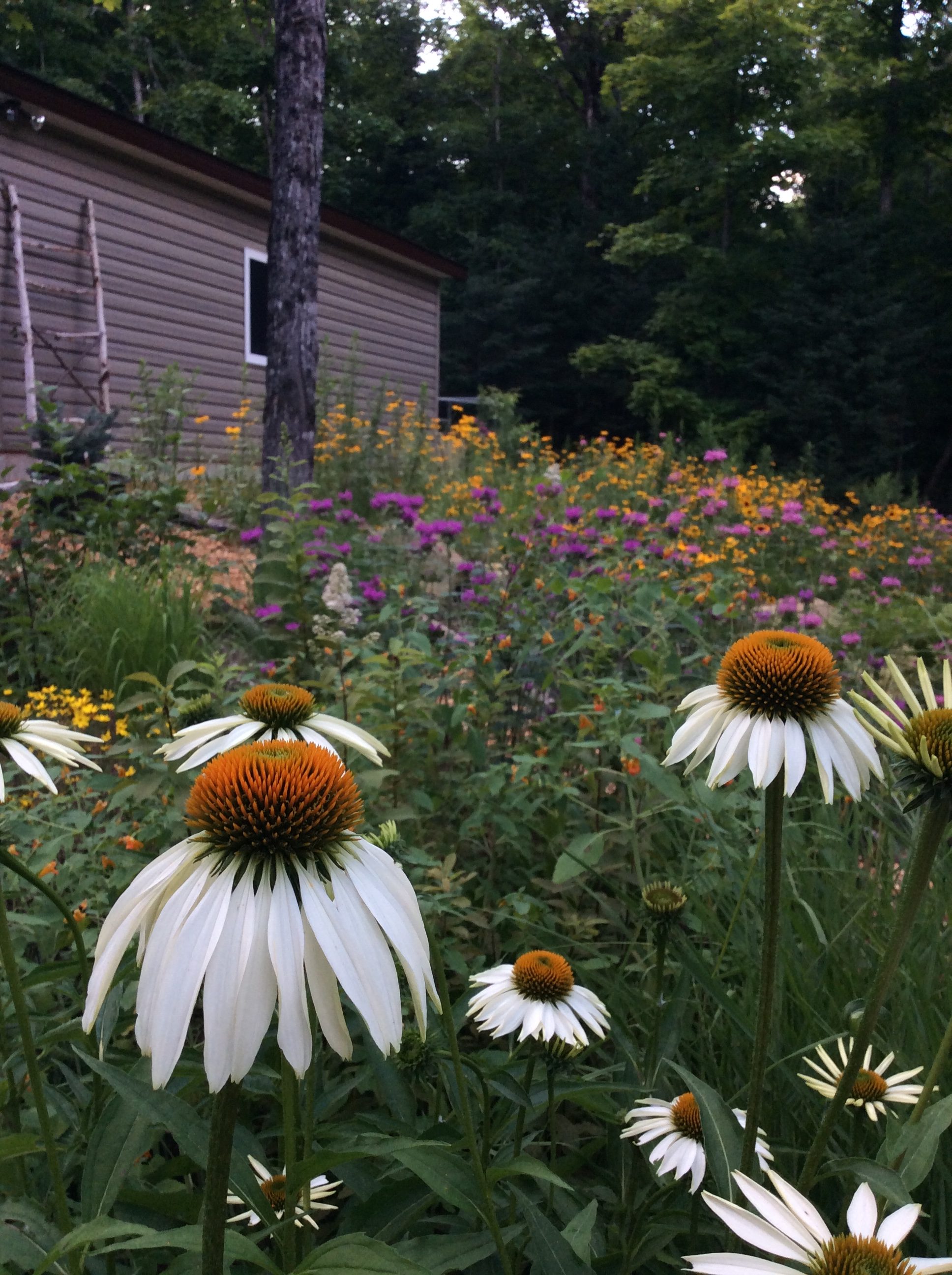 Heather handpicked the seeds and planted a beautiful meadow of native wildflowers on her property. She has been reaping the rewards ever since, as the flowers attract an abundance of precious pollinators. 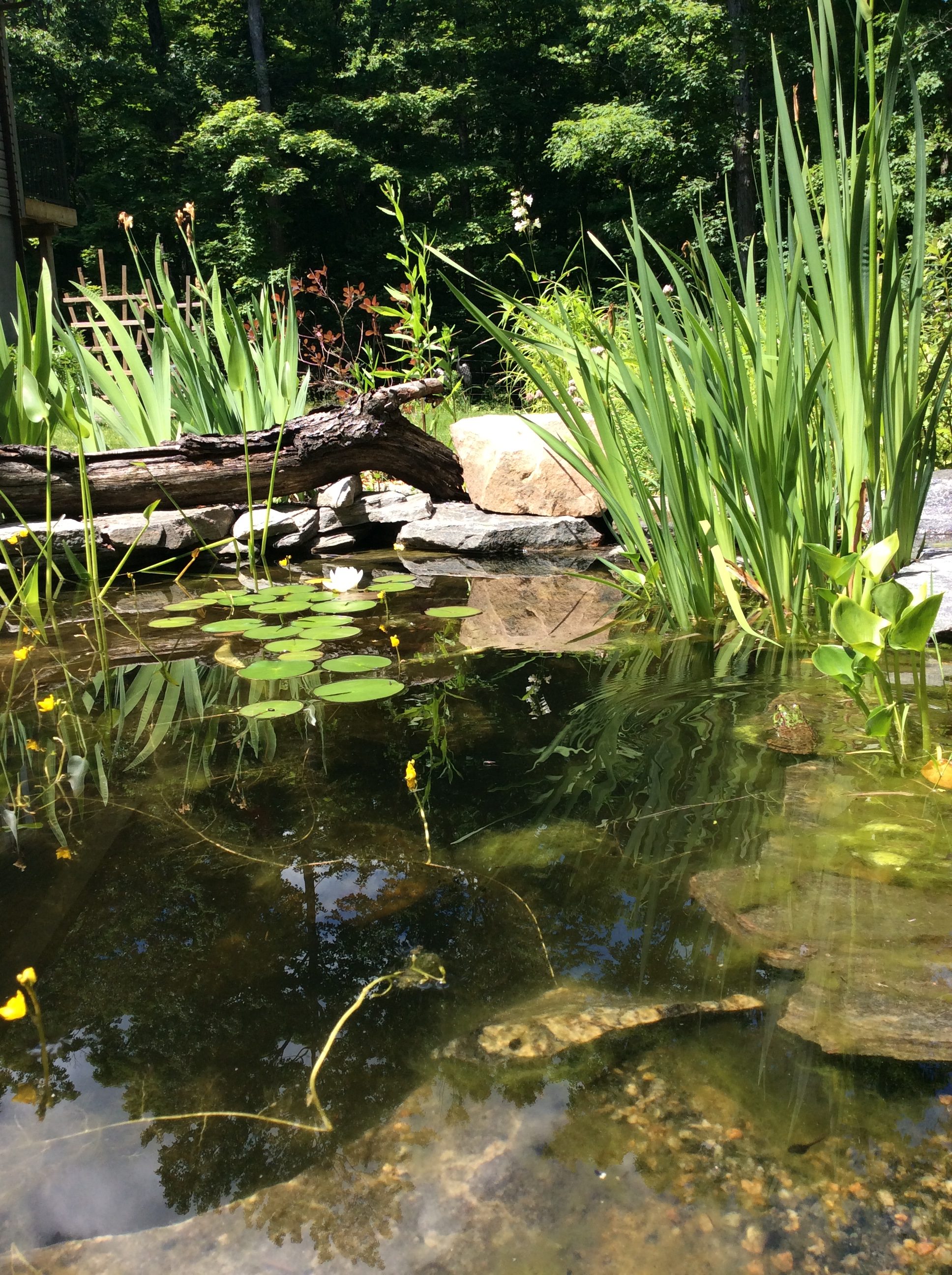 This backyard pond Heather built was originally intended for her goldfish. Instead, it became a spawning ground for salamanders, peepers and toads. (Photos courtesy of Heather Van Duuren)

And then there’s the aquariums, which is a whole other story. First, it begins with Heather always loving fish. Not to eat, necessarily, or to catch but to place in a bowl and watch swim around. Fish have always fascinated her, but like with so many people the poor finned creatures end up dying before the realization sinks in that you probably weren’t taking care of them properly in the first place.

I don’t think people intentionally kill fish, I just think there’s so much lack of information and they don’t know better.

For years, she struggled to create the perfect setup for her fish until one day she decided to get serious and try something new. She started researching and came across the Walstad method, which is a low-tech and effective way to make a natural planted aquarium. It starts with a soil base, which is then capped with gravel and plants are placed in it. Seven years ago she made her first one and “it was rocking.” And then she made another, and that one did well, too. Before Heather knew it she had a new-found passion. She has five aquariums in her home, including a 20-gallon planted tank with shrimp and guppies, a 10-gallon with guppies, and a 300-gallon tank downstairs (which someone could easily mistake for a hot tub or small swimming pool). Just recently she finished creating her newest planted tank, which will be the home for dozens of blue dream shrimp. She’s also got an amazingly colourful Betta fish who is absolutely thriving (has been for years!) in his planted bowl. She’s become a guru at making mesmerizing planted aquariums and may even take a stab at aquaponics in the future. 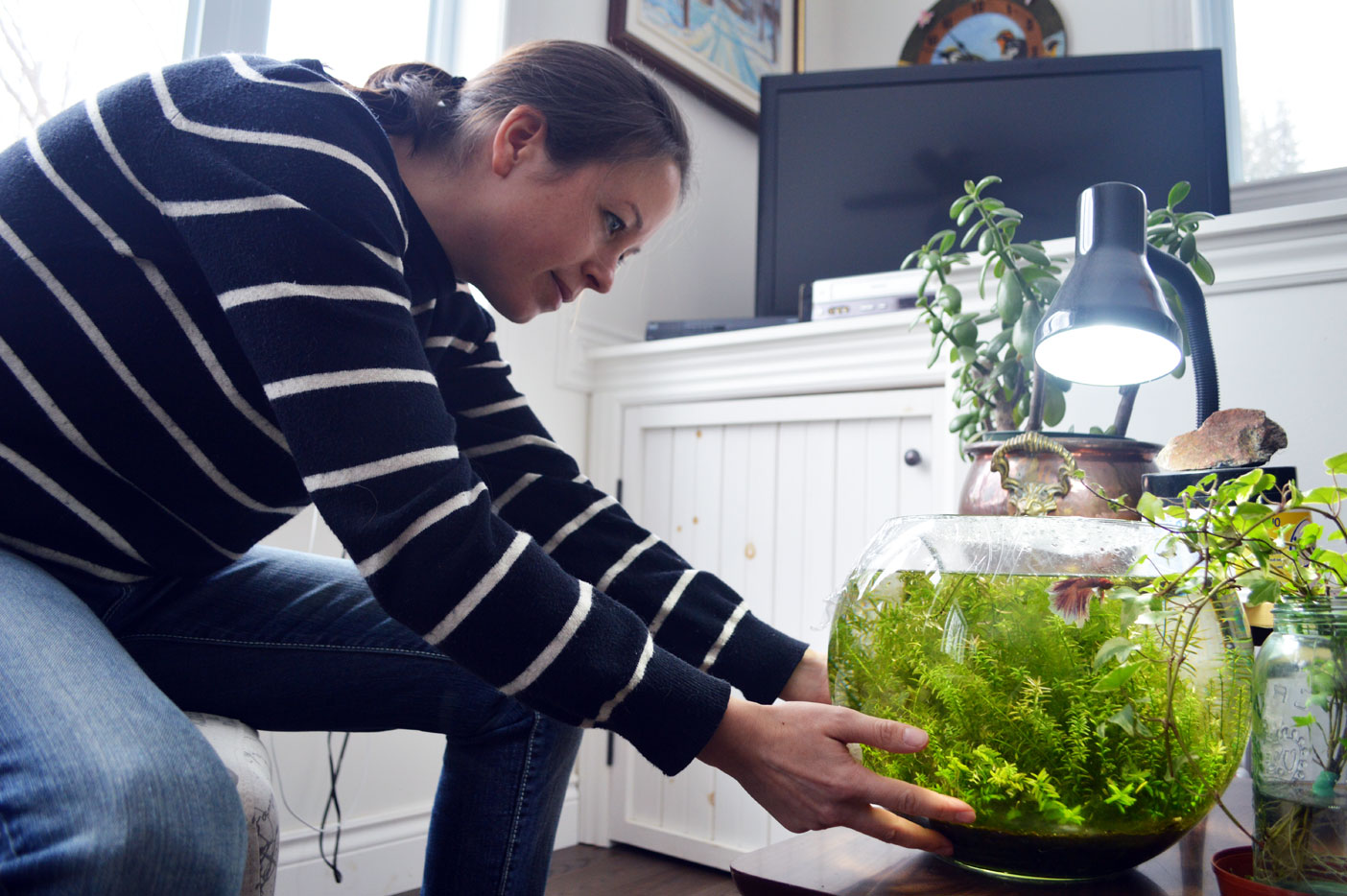 Her male Betta is loving his planted bowl. The species of fish is typically aggressive, but he didn’t eat the two guppies she put in the bowl with him. 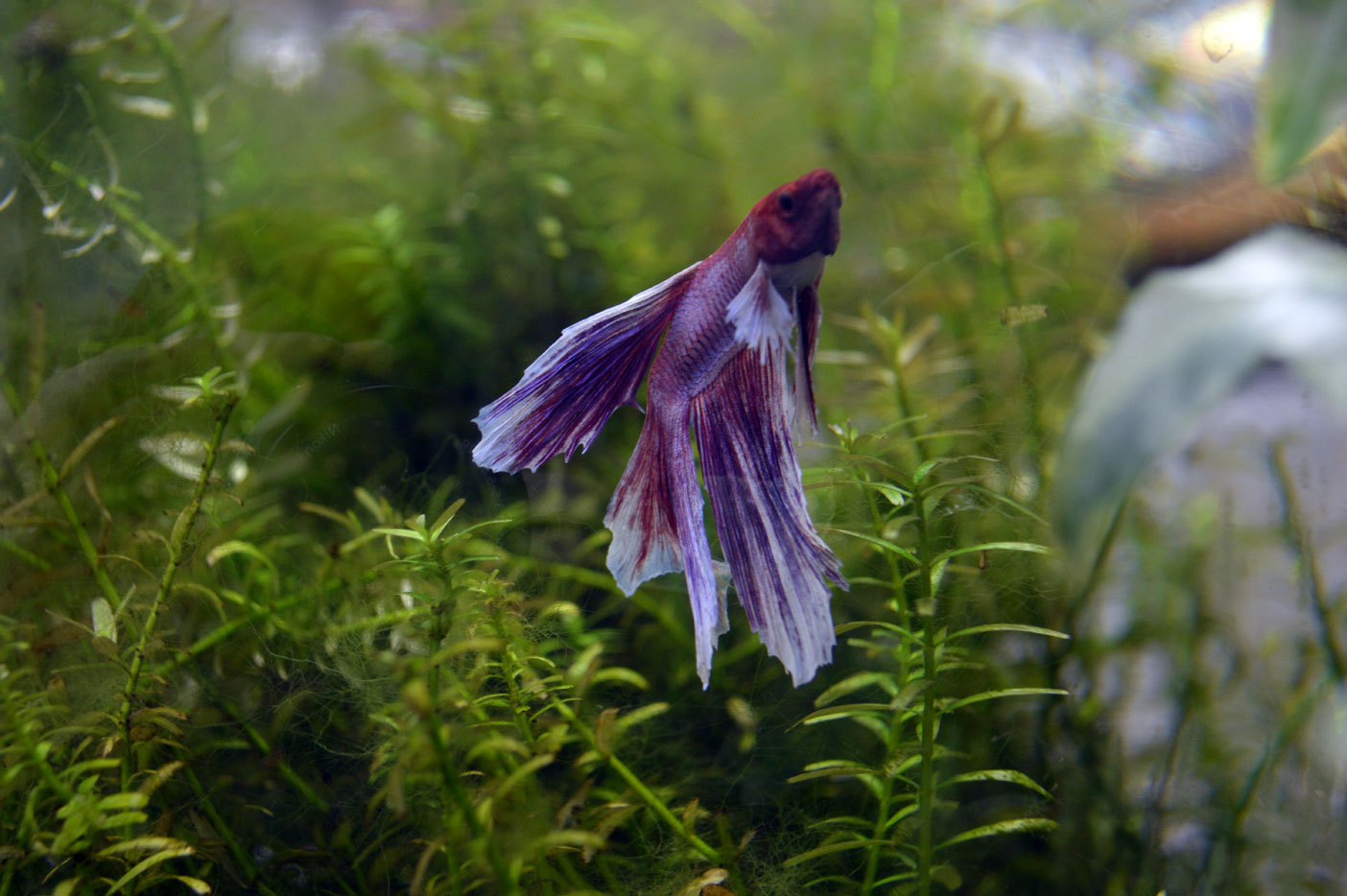 You won’t find a happier fish than Peter Bob the Betta (proudly named by Heather’s son). 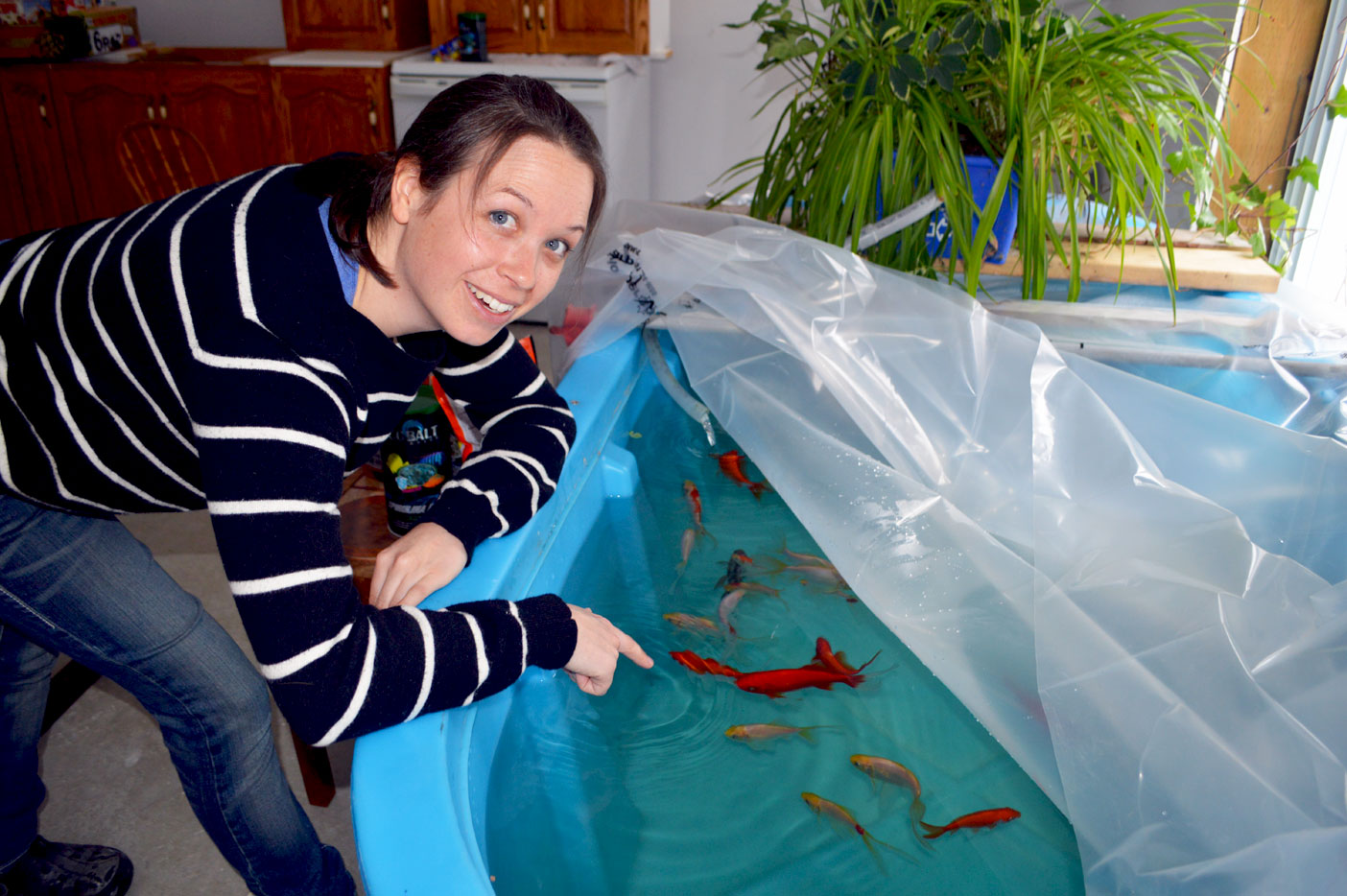 Heather has named every single goldfish in her 300-gallon tank. She has over 30. Obviously, her fish are well taken care of. 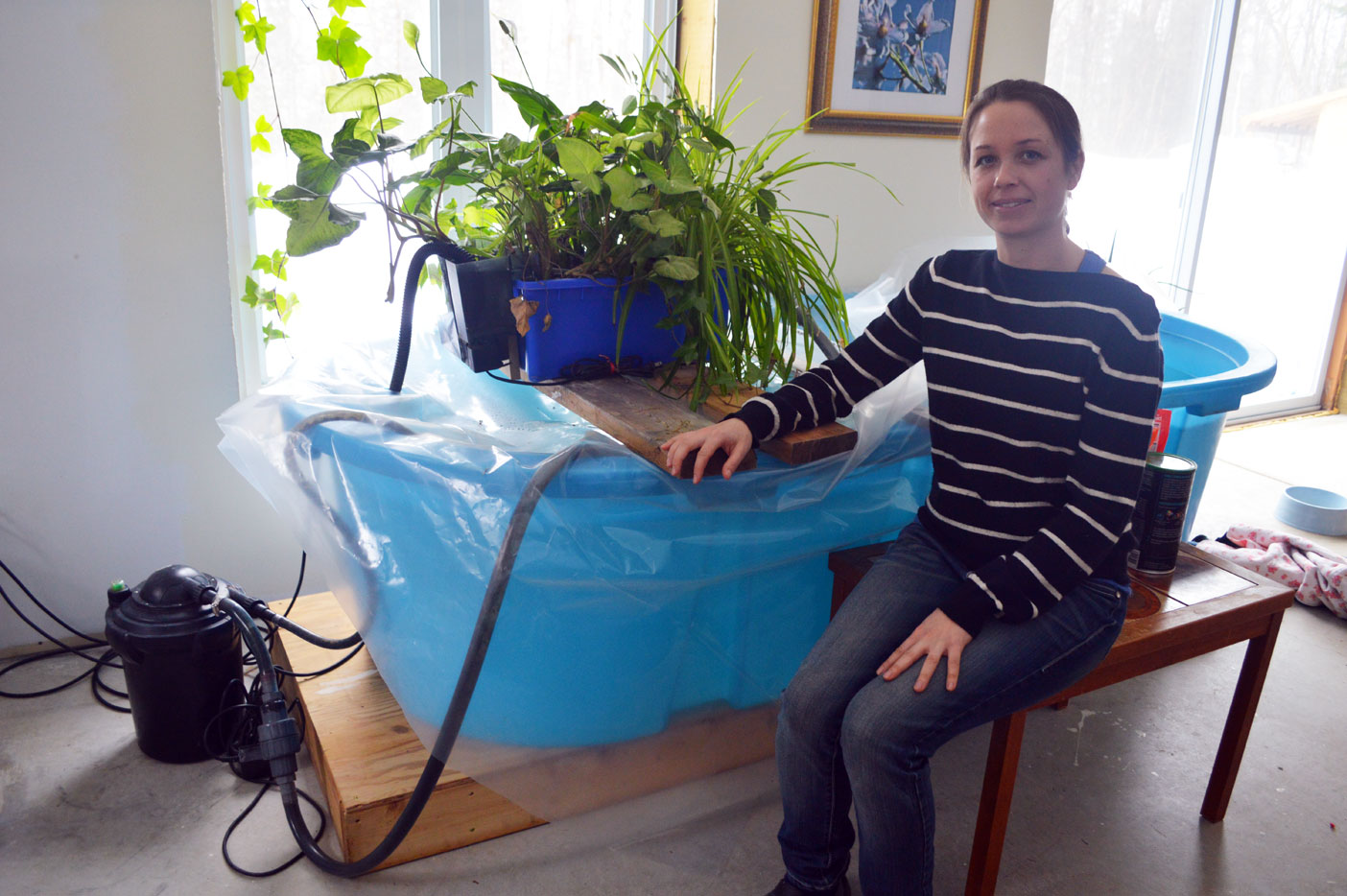 Creating planted aquariums has so many benefits, says Heather, with the potential to even grow food. lettuce and herbs. Here, she is pictured in front of the 300-gallon stock tank., which has a bog filter that helps to clean the water. 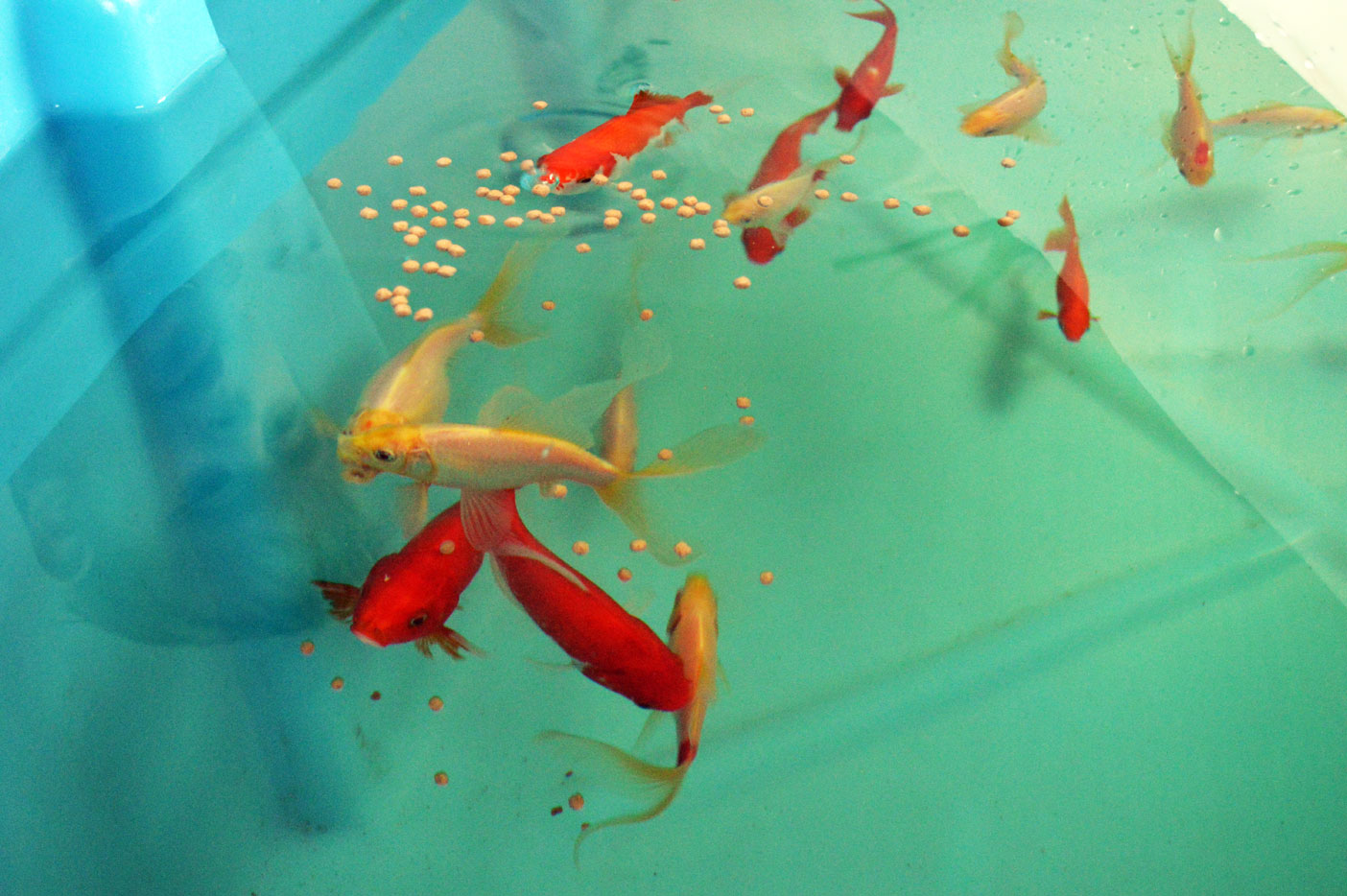 The fish are fed twice a day and Heather only has to clean the stock tank once a month due to the plants acting as a filtering system. 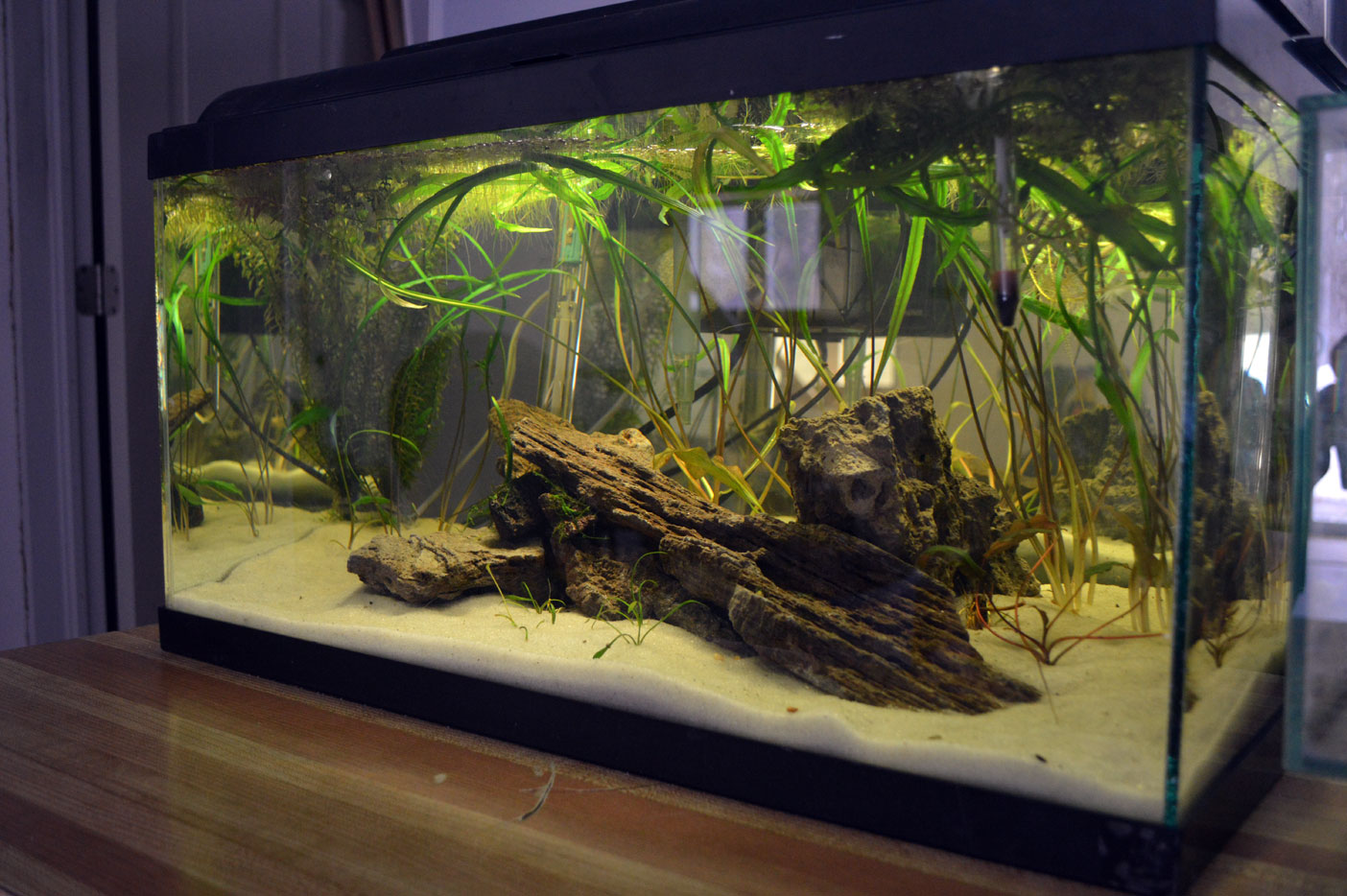 Her newest planted tank will be the home to dozens of blue dream shrimp. 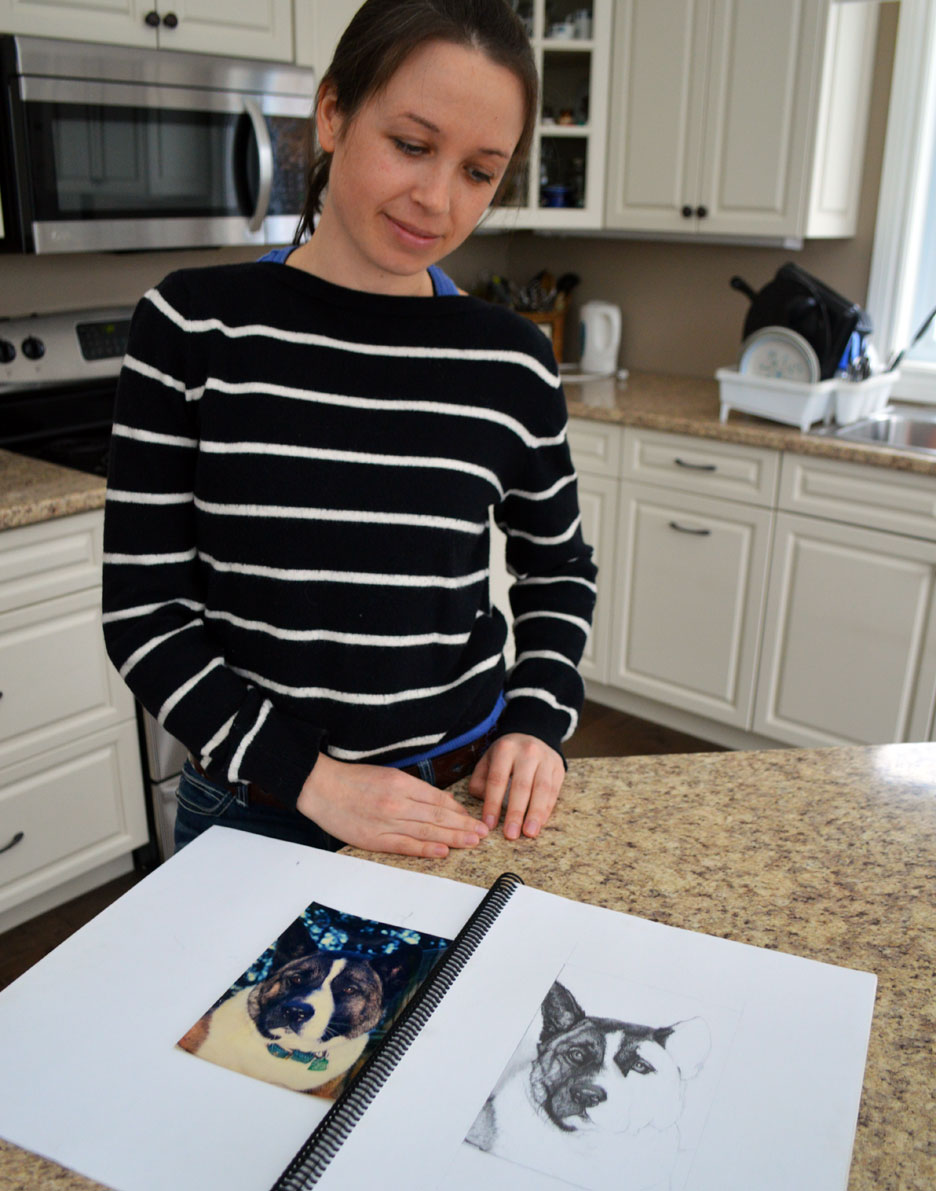 And guess what else Heather does? Draws. She has an amazing eye for detail but tends to not finish her pieces. (She really should! She’s amazing!)

“They’re really awesome. They basically become an ecosystem in an aquarium. They eliminate the need for frequent water changes, and if you have a lot of fish you’re going to have to do a lot of water changes to keep them healthy. The plants take out the excess nutrients and help them grow and fish waste feeds the plants… it’s the whole cycle. Plus, I love being able to see all the green growth inside the tanks especially at this time of year when outside looks a little bleak.”

A few years ago, Heather built a 400-gallon pond (complete with native plants and even water lilies) outside, which was going to be for her goldfish. Instead, it became a spawning ground for yellow-spotted salamanders, grey tree frogs, spring peepers and American Toads. Backyard ponds will attract all kinds of wildlife, says Heather. Come the summer, she will have more than 30 frogs in hers. And not just that but they’re aesthetically pleasing.

“I really encourage people, it doesn’t have to be big to make a difference,” she says.

Every week, I profile an extraordinary human being who lives in our community. If you know someone who is doing something interesting with their life, I want to hear about it. Send me an email at laura.maclean@doppleronline.ca.