You are here: Home / Sports / Athletes of the week: MUSAC Marathoners

The Muskoka Aquatic Club (MUSAC) swim team has been missing their time together in the pool, but the COVID-19 pandemic has not kept them apart.

They still wanted to be active and creative ‘together’, though, so the club’s coaches put together a socially distanced fun run—the MUSAC Marathon—for their athletes.

“It’s been difficult for everyone to find ways to stay active as a team while maintaining physical distancing,” said Coach Heather Lee.

The club’s original idea was to divide participants into teams and have them each collectively run a marathon distance (42.2km), with the fastest time being named the winner. But the fun run on May 13 drew in so many participants that each team could have run almost two-and-a-half marathons.

“Not only did our swimmers participate, but in many cases the whole family took part,” added Lee. The athletes were encouraged to wear their MUSAC swim attire as well as their wackiest costume to entertain spectators.

The MUSAC marathon had 70 participants who were divided by age and distance to run in four teams: Red, White, Black and Gray.

The teams committed to run a combined total of 311km—a distance chosen because it is the equivalent of the distance from the Summit Centre in Huntsville, past the Bracebridge Sportsplex, and all the way to the Wayne Gretzky Sports Centre in Brantford, just as though the team was travelling physical-distancing style.

In total, the teams logged more than 385km for the one-day event.

“MUSAC Marathon was a booming success!” said Lee. “A beautiful day of running in the sun with family and friends across Muskoka. Our participants came out in full force and represented MUSAC with pride.”

The runners sported hair dye and wigs, costumes and onesies, snorkels and swim suits. Overall, the beautiful sunny day brought the team together virtually with smiles, laughter and a lot of hard work with a little bit of sweat.

“By running on the same day, as a team, submitting photos, and putting together a video of the day’s highlights, we were able to run together while staying apart,” said Lee.

Team Gray led the day with the fastest average speed. A special shout-out to Phebe Gray, who ran 21km in exactly two hours for her team.

Team Red was by far the best dressed, with three-quarters of their participants decked out in wacky outfits.

And Team White had the most canine companions participating.

Organizers had planned a prize for the MWP (Most Wacky Participant) as well, but the runners had so much creativity that it was too difficult to pick just one winner. So instead, there were several: Mason Beaumont as Captain MUSAC, Loren Kidd as the Angry Bumblebee, Lucy Chapman as the Witch Doctor and George Kierstead as the Speedo Bandit. Honourable mentions go to Spencer Kmiec for Best Hair, the Sumo Squad (the McClellans), and the Man in Black (Ross Graham). 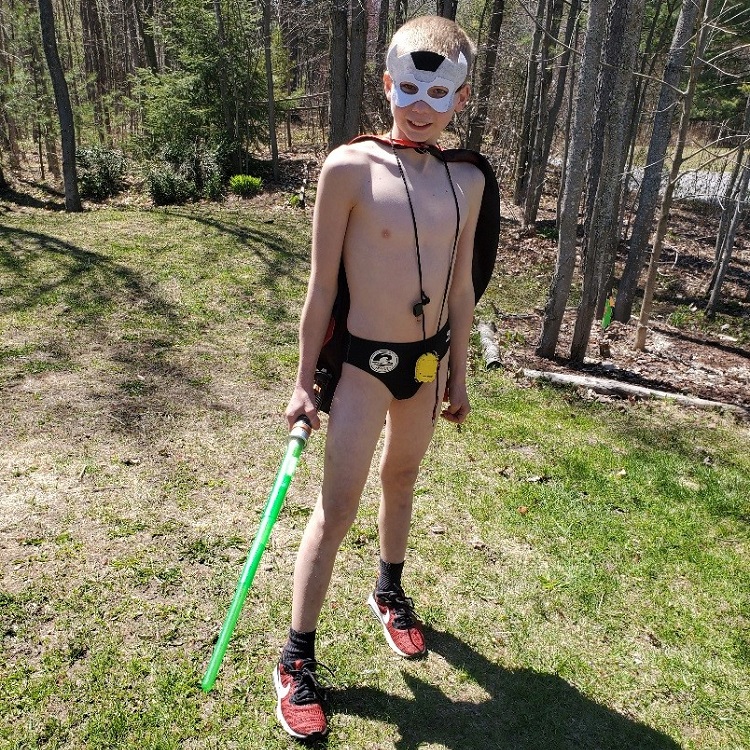 George Kierstead (above left) as the Speedo Bandit and Lucy Champman (above right, at right) as the Witch Doctor (supplied)

“I was excited about this event from the beginning, but couldn’t predict the goosebumps and smiles it would create,” said Lee. “Thank you to everyone for making the MUSAC Marathon a success.”