You are here: Home / Sports / Athlete of the Week: Summer-Rae Dobson

Summer-Rae Dobson, a Huntsville native who plays NCAA Division 1 hockey at Mercyhurst University in Erie, Pennsylvania, has been named Player of the Month for College Hockey America.

“I had five goals and four assists in two games and I ended up second on my team with points,” said Dobson.

Anyone who knows Dobson, knows what hockey means to her. She has played the sport since she was three years old and feels very fortunate to have been able to continue to play. “Hockey is my favourite sport; love the game,” she said.

Her love for hockey began with the Huntsville Minor Hockey Association before she moved on to play for the Aurora Panthers and then the Ridley College Tigers.

Hockey has not always been easy for Dobson. It takes a lot of commitment and discipline to balance her schooling and hockey, she said. “Hockey has made me a stronger person. I’ve had to deal with a lot of ups and downs but again as I face each new challenge I always push forward building on the previous hurdle. My mom’s famous saying…’always look forward don’t look back’. ”

Dobson is all about teamwork and loves that hockey is a team sport. She said that her teammates from the past and present have all contributed to her success along the way. Her team at Mercyhurst University has had a very successful 2019/20 season, going undefeated on their home ice 12-0-4—a record for the Mercyhurst women’s hockey program.

The most memorable hockey moment for Dobson is her team’s most recent success as she scored the overtime winning goal. They won the CHA (College Hockey American) regular season title and were awarded the title CHA Tournament Champs last weekend in Buffalo. “Our first game we beat Penn State 4-1 and the championship game against Robert Morris ended in an overtime goal which fortunately,with the help of my teammates, I scored.”

That win would have sent Mercyhurst to the NCAA championship tournament today, where they would have faced number-one team, Cornell University. The NCAA announced yesterday, March 12, that the championship was cancelled due to COVID-19 concerns.

Dobson shared how much she appreciates everyone who has supported her along the way in her hockey journey. Definitely her parents, who travelled endless kilometers to be on the sidelines cheering her on. “I have had a lot of people in my life that [have]  helped and contributed to my hockey journey and I will be forever grateful.” 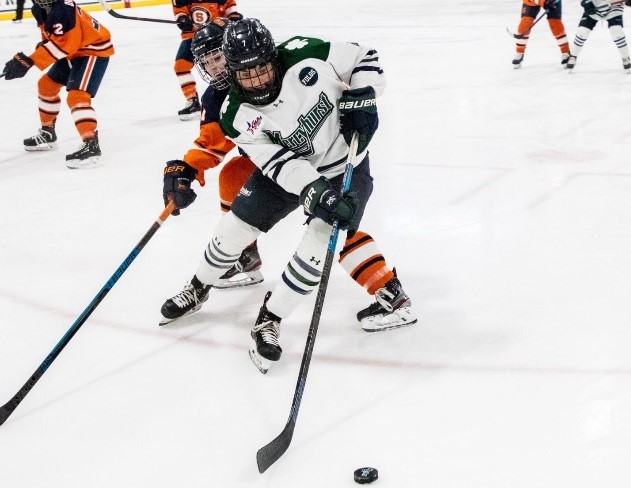 She hopes to continue to play hockey after university, she added.

“I’m hoping there will be more development in the women’s professional league that may open up some doors,” she said. “If not, I would love the opportunity to maybe try to get on a hockey coaching bench, or become a recruiter for women’s hockey. I would like to pass on my experiences on to the younger girls and put them into the right direction of school selection and hockey programs.”

From Ridley College to the NCAA, Summer-Rae Dobson is one step closer to her hockey dreams