You are here: Home / Commentary / Alarming that Huntsville placed in the bottom 12 per cent of communities in Canada | Commentary

“Oh, would some power the gift give us, to see ourselves as others see us.”
~Robert Burns, 1786

The longer one lives in a community the more difficult it becomes to be objective about that community. We live our lives with the same friends and family, often with the same routine—year in and year out. It all becomes so familiar. I think that it is often useful to try and imagine how others see us.

To that end, this past summer Environics Analytics and Maclean’s magazine published an analysis of the Best Communities in Canada 2019. They looked at the 415 most populous communities (a community was a Stats Canada “census subdivision”) in the ten provinces of Canada. They then ranked communities based on the following  ten categories (weighting towards overall score in brackets):

As the authors note, the whole idea of what is a “best community” will vary from person to person. I, for example, would not have weighted “Weather” so highly… but that is me. So, we can all quibble (or even argue vociferously) about this study. But what makes this so compelling is:

• It is absolutely unique to have a “national” comparison of such a small community as Huntsville. In and of itself that makes the result noteworthy; and

• Maclean’s magazine has readership of 2.4 million. So, 2.4 million people may have this opinion of Huntsville.

Huntsville was ranked the 367th Best Community in Canada.

This places Huntsville in the bottom 12 per cent of communities in Canada.

I have committed to myself not to editorialize on this article. But to say that I found this result shocking would be an understatement. Whether one disagrees in whole or in part with the methodology of the study, it bears consideration. To be publicly named one of the worst communities in all of Canada should start a conversation throughout the community and especially at the level of the local government.

As I move to look at the reasons for such a poor showing I will provide scores for Huntsville, and for comparison, the scores of our sister communities in Muskoka (Bracebridge and Gravenhurst) and for the six communities in Ontario which are most similar in population (Owen Sound, Wasaga Beach, Essex, Cobourg, Thorold and Port Colborne). For example, the overall scores were: 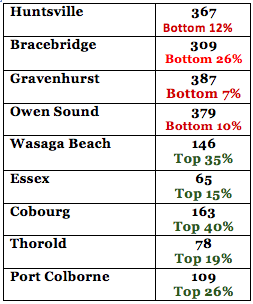 The take-away from this table is twofold. The Muskoka region has itself some structural problems. And secondly, the size of the community is not a barrier to “success”. There are clearly best practices out there that create “best communities”

The Wealth and Economy Factor is heavily weighted, comprising 20 per cent of the total score. It is comprised of local unemployment rates, household income and average household wealth.

On the Wealth and Economy Factor, Huntsville ranked 331, or in the bottom 21 per cent in all of Canada.

Again, the Affordability Factor is heavily weighted to comprise another 20 per cent of the overall ranking. It is comprised of rent affordability, home affordability, average value of a house and discretionary spending.

On the Affordability Factor, Huntsville ranked 287, or in the bottom 31 per cent in all of Canada.

The name of the third factor is somewhat misleading. Factor 3 is entirely about five-year population growth. The greater the growth the more points on this factor.

On Demographics/Population Growth, Huntsville ranked 224, placing it just about halfway through list of Canadian communities.

In a category that most adults are interested in, Factor 4 tracks a range of taxes. Included in this category are provincial sales tax, provincial income tax (remember this was a national study) and local property tax.

Probably due to the nature of our small town, Factor 5 seems to be over-weighted in this analysis (garnering a full 10 per cent of the weighting). Communities received points in this category for the percentage of people who walk, bicycle or take public transit to work.

On the Commute Factor, Huntsville ranked 337 across Canadian communities placing it in the bottom 20 per cent.

I would imagine that everyone would agree that Factor 6, Crime, goes a long way to define the quality of a community. This factor is based on the five-year average of the crime severity index for the police service covering each community. The lower, the better.

On Crime, Huntsville ranked in the top 35 per cent of Canadian communities with a ranking at 146 out of the 415.

While I suppose some seek out communities with the “best weather”, as it is not a factor that anyone can do anything about, I think that this is over-weighted.

Compounding my skepticism, Huntsville ranked 330 in the weather category, to place it in the bottom eight per cent in all of Canada. (For those interested, without the weather factor, Huntsville’s overall ranking rises from 367 to 347; the latter still in the bottom 20 per cent across Canada.)

In light of current discussions around future local health care provision, Factor 8 provides for an interesting view of how health care is provided in Canada. This is a largely objective measure including doctors (family and specialists) per 100,000 population, proximity to a hospital and wait times.

Huntsville ranked a decent 110 in all of Canada placing it in the top 25 per cent of Canadian communities.

Factor 9 is kind of a catchall. Points are awarded for locations near a college or university, having a movie theatre in town and the number of restaurants per capita. (Mercifully, Amenities is not a very heavily weighted factor in the overall “Best Community” score.)

On Amenities, Huntsville ranked 251 to place it just lower than the midpoint of the listed communities.

The last factor used to create the overall “Best Community” score is really about arts, culture and community involvement. This again is a factor that only contributes 5 per cent towards the overall score. I am sure that there are many who would favour a higher weighting, but probably just as many who would disagree.

Huntsville placed in the top third of Canadian communities with an absolute ranking of 127 on Culture and Community. 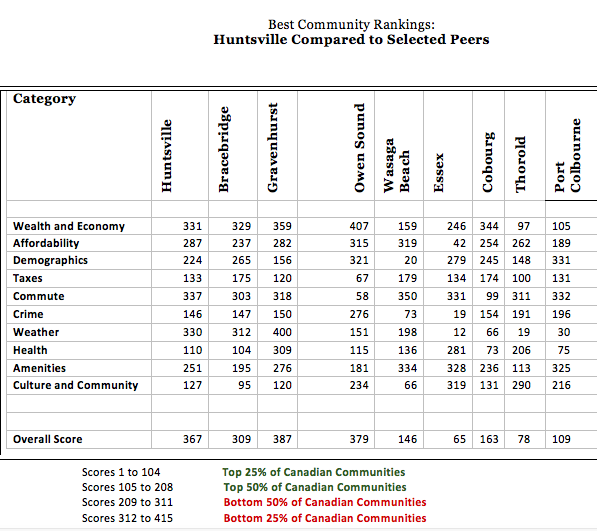 While the Environics Analytics/Maclean’s “Best Community” study is certainly not flattering to Huntsville (nor indeed all of Muskoka); and while the study may not be as rigorous as one may want, the results provided bear serious consideration. Firstly, it’s rare for a small city to be able to objectively compare itself to its peers across Canada. Secondly, it is what 2.4 million Canadians have read about Huntsville.

Council and all community leaders need to consider what it means to be ranked in the bottom 12 per cent of all Canadian communities. There are, after all, local solutions to the problems that this study suggests. We see other communities which are very similar (e.g. Wasaga Beach) using “better practices” to create “better communities”. My read of the data suggests that after the boom years of 20 years ago, growth is stalling in Muskoka (probably capped by the issue of affordability). Perhaps Huntsville needs to be more focussed and strategic in addressing these issues. (It is insufficient to simply write a Strategic Plan.)

Whatever the cause of these results and whatever the ultimate solutions, nothing happens without acknowledging and discussing the findings.