You are here: Home / Feature / After 40 years with the Huntsville Lake of Bays Fire Department, Mike Cook is retiring

Many kind and generous people in Huntsville volunteer their time and expertise to help others. But not too many can claim that they have volunteered with the same organization for 40 years. Mike Cook is one of those people; he has volunteered with the Huntsville Lake of Bays Fire Department for four decades, has achieved the rank of District Chief, and will soon be retiring.

Like many things in life, serendipity played a bit of a role in Mike’s decision to become a volunteer firefighter. Mike and his family had just moved into a new home in the late ’70s when they had a chimney fire. Mike recalls, “One of the guys who showed up to put out the fire was a former customer of mine. After the fire was extinguished he asked me if I’d ever considered volunteer firefighting?”

He jokes, “Back then, they’d take anybody!” He adds more seriously, “Requirements are much tougher these days but most people who want to do it can.”

Mike recalls, “When I showed up at my first meeting I learned that there would be a six month probation. If they liked you, that was it.” He considers, “It actually wasn’t so much about ‘liking’ someone. It’s more that in firefighting you need to be a good fit with the team. Of course it is different today as there is a stronger Human Resources approach to staffing of volunteers but that’s the way it was then.”

Other things have changed over the years too. Mike remembers, “In the early days there was stuff going on all the time. It was a smaller group of about 20 men – no women in the department at that time – and we were 100 per cent volunteers. There was no paid staff. So it was easy to be a tight-knit group at that size and we were always getting together socially.”

He chuckles in remembrance. “I was one of the young guys then. We had some men in the group who’d been volunteering for 20 and 30 years. It’s rare these days to see long terms of service.” He adds, “This is no criticism – our team today is a great bunch of people. But everyone is so busy these days. It’s hard to hold on to volunteers for more than five to seven years. People today have stuff going on all the time. There are kids to drive to activities, both partners are working full time, and people are working long hours. All of the volunteers have full-time jobs.”

While he likes and respects all of his co-volunteers, he singles out one young man in particular. “Greg Miller came to us when he was just 19 years old. He is a one-of-a-kind kid. He is smart, hard-working, dedicated and has absolutely no attitude at all.” He adds, “I may have thought that a certain – more mature – age group made an ideal volunteer at one time, but Greg has demonstrated that there can be true excellence at any age.”

Changes in construction standards and safer vehicles made a big difference over the years in the types of calls responded to by firefighters. “Years ago we had lots of structure fires, car fires and chimney fires but improvements in standards and educational outreach has reduced that tremendously,” says Mike. He quips, “I keep telling our Prevention Officer that he’s putting us out of business!”

Mike makes a point that family support is critical to maintaining a strong volunteer firefighting team. “My wife and kids have always supported my volunteerism. When the kids were still at home there were lots of times when I had to leave in the middle of a meal or on Christmas morning.” He explains, “In the old days we could count on a few chimney fires as people loaded up their wood stoves or fireplaces with discarded wrapping paper.” 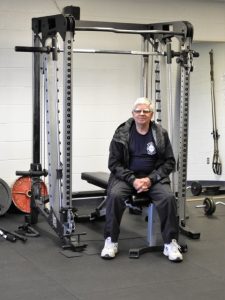 As we take a photo of Mike in the well-equipped fitness room at the station he laughs, “Oh, I will hear about this from my colleagues! I’m sure they’ll say they’ve never seen me work out and they are right!” He explains, “I am an active guy; I enjoy fishing and snowmobiling and working on construction projects for friends and family. If the department maintenance guy needs a hand I’ll pitch in there too.” He smiles, “I’m really not a gym kind of guy.”

There is a July campaign to attract volunteers, which allows training to start in September. Mike explains, “When we interview applicants, it’s important to stress that we do lots of things in addition to fighting fires: ice water rescue, accident extractions, hazardous spill clean up and more. And it’s important to ask what they expect to get out of volunteering. If they think it’s the pure ‘excitement’ of firefighting then they may be disappointed. They need to understand that there are many ways we help and service our communities.”

There are great resources in place for volunteers through the Town of Huntsville. There can be trauma in attending fires and accidents especially when there is a loss of life. A chaplain and mental health professionals are there to ensure that volunteers and staff can get help if they need it. Mikes muses, “I know that before we knew about things like PTSD and the like we had to handle things on our own. I know that there were people who died that I thought about for years. It really bothered me. It’s good that these days we have support.”

The department looks constantly for ways to attract and retain volunteers. Mike says, “Once a month we socialize prior to the meeting, inspect the equipment in detail and enjoy a meal together.” He smiles, “A few months ago we included retired firefighters and it was a huge success so I’ve already told them that they’d better keep inviting me.”

Aside from the monthly meetings, Mike doesn’t think he’ll be hanging around once he retires. “It’s going to be hard enough to leave. I’ve felt as committed to this as I did to my paid job. I think I need to make a clean break at least for awhile. I’ve got lots to keep me busy.”

Mike loves to talk about the fire department but he’s a humble guy who hates to talk about himself so Fire Chief Steven Hernen steps in to give him a little bit of his due.

As Chief Hernen sums it up, “Mike has been a huge part in the success of the fire department.” He sincerely adds, “Although we will find someone to replace Mike’s name on the roster‎, we will never find anyone to fill his boots.”