We began to see marchers many kilometres before the designated march area. On a bus filled with 47 quietly eager Canadians, my friend Sandra Smith and I watched out the window as we passed huge swaths of women, most carrying signs and sporting pink cat-eared hats. Women seemed to spill down every street, merging at intersections only to spread out again. The combined marchers created a living, breathing entity, narrowing and swelling, cheering and chanting, all fueled by varying degrees of outrage and zeal.

Why did we, two white Canadian women, spend a combined total of thirty-one hours on multiple buses over the course of a hectic weekend, to participate in the Women’s March on Washington? Although we had many reasons in common, we also ‘marched our own march’. I carried with me a personal history of sexual violence, which Trump brags about subjecting women to. So far, at least 13 women have accused Trump of sexual assault, including his ex-wife—something that 1-in-3 Canadian women experience. Also, as a lesbian and a feminist, I live in a world that values female solidarity. Never one to say, “I’m not like other girls”, I’ve always been a staunch supporter of sisterhood. I’ve been witness and participant to the amazing things women can do when we are actually empowered, which is to say, when we have power over our bodies, decisions, education, and the way our lives take shape.

Each woman who marched did so for her own reasons, but I also believe that we did so for other women’s reasons, as well. Though I am unlikely to require an abortion, I support access to abortion on demand and without apology. Although I am statistically much less likely to experience intimate partner violence, I advocate for all women to live lives free of violence. And although I will not experience racism, or ableism, or many other oppressions faced by women in our community and across the planet, I still stand, linked, with the women who do, as it is all women’s battle to end any woman’s suffering. As Audre Lorde says, “I am not free when any woman is unfree, even when her shackles are very different from my own.”

We lost our Canadian contingent almost immediately, so began to let the crowd lead us. To my dismay we missed Gloria Steinem but the roster was filled with feminist, anti-racist activists. As we made our way, we encountered many local women, mostly black Hillary supporters (a staggering 93.5 per cent of black women in Washington voted for Clinton) who cheered us on, thanked us for our presence, and spoke with us about their experiences as Americans and residents of the nation’s capital. As a Canadian, I had been able to be somewhat removed from the devastation of a Trump presidency, but amidst Americans, you could almost feel the weight of urgency. The marchers were in good spirits and there was immediate camaraderie amongst us, but the underlying sense of indignation made it clear that we all wished we didn’t have to march against this sh*t. 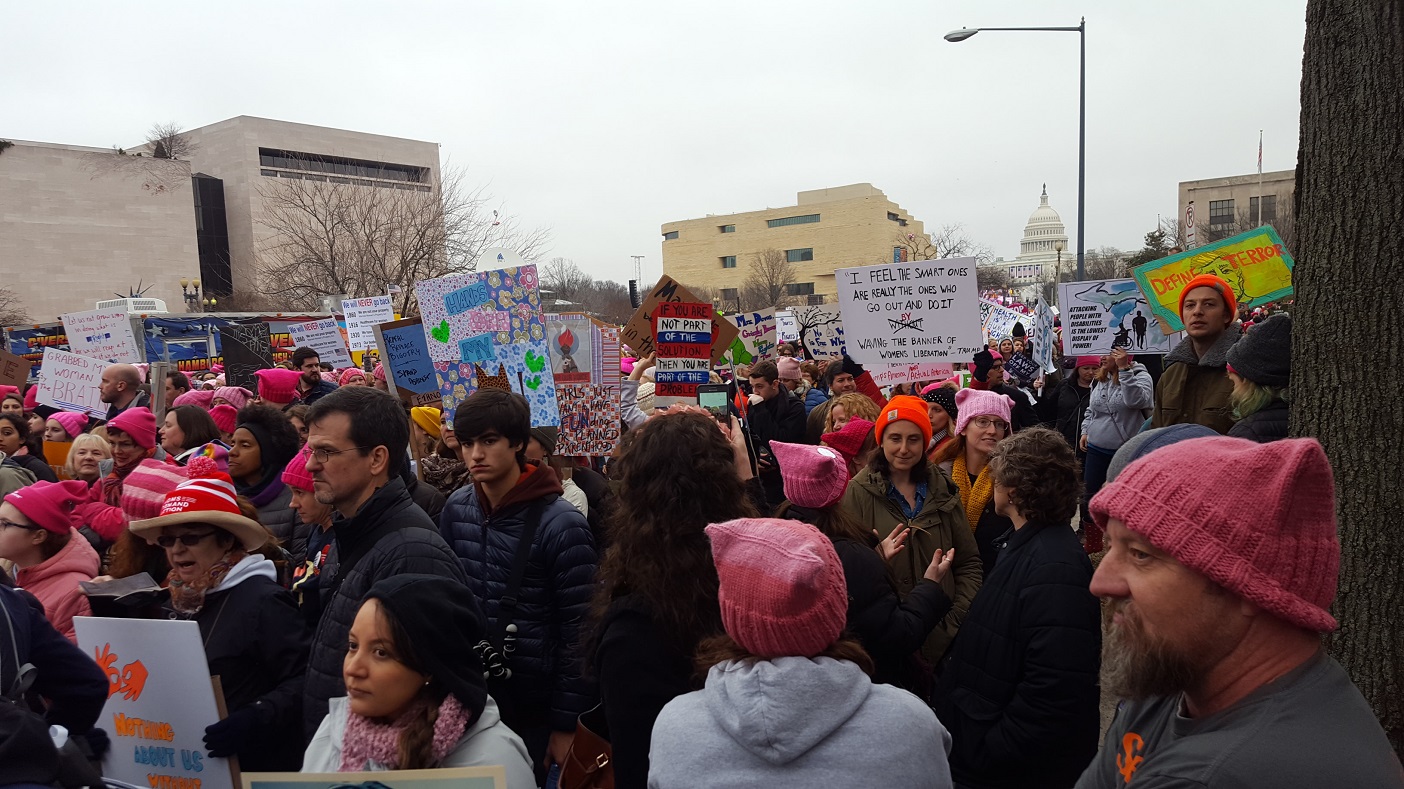 After seeing Angela Davis speak and Janelle Monae lead the rallying cry of “Say Her Name!” (a reference to Sandra Bland, a black woman murdered in police custody, arrested for failure to signal a lane change), we began to march. We didn’t get very far before Sandra broke into dance upon hearing Madonna’s distinctive voice, but we continued our march. Women weaved in and out of the major arteries, and though the march followed Pennsylvania Avenue, women streamed down every surrounding street and sidewalk. It’s fascinating to be a part of a march so huge—you are immersed in your immediate surroundings, you can really only see and hear the nearest few hundred people. At the time we were told to anticipate 200,000 people, but to hear later the numbers had more than doubled to 500,000, and to see the photographs of a veritable sea of pink hats and protest signs, deeply humbled us. When we later learned women had marched on all seven continents, that we had joined the largest global protest in human history, we knew that the 31 cramped, antsy, and sleep-deprived hours on the bus had been worth it.

Besides, what was 31 hours when compared Gladys Radek’s three-month cross-Canada trek to raise awareness and demand justice for missing and murdered indigenous women, including her 22-year-old niece? Or the U.S. average journey of 40 miles (and upwards of 250 miles in some states) to get to an abortion clinic? Or what about the six-kilometre average walk that sub-Sahara African women make daily to get water for living needs? Across 75 countries, women marched not because we all confront the exact same issues, but because the oppression all women face is cruel, stunting, and completely based in lies.

In the seven days since Trump became president, he has issued executive orders to halt funding and support of any global initiative with pro-choice politics. He has re-enlivened the Keystone XL pipeline only days after a massive oil spill in Saskatchewan. He has discontinued funding for battered women’s shelters and other women’s programs and, as shelter workers, Sandra and I know this will kill women. (Oh, and people are losing their jobs—which, according to Trump, that should be a bigger deal).

Trump has also ceased admitting refugees from several countries including ones in which the United States itself is causing the turmoil. And Trump is moving forward with a $16 million-per-mile wall along the Mexican border, to be paid for by American taxpayers, and ‘reimbursed’ by Mexico against their will.

Trump is days in to his presidency and the dog-whistles of fascism are popping up faster than the muzzled media can fact-check. But in a climate where anything can be fact as long as the person saying it has enough power, it will continue to take more than 500,000 voices to shout down one.

But after the Women’s March on Washington, I learned that I am not just one more voice in 500,000 but that we are one voice, and while our politics may not seamlessly align, it is time we come to learn and use the power of our solidarity, our action, to create the world we know is possible. Oppression thrives on division. But women know that unity births liberation.