You are here: Home / Community / Ever wonder about the person behind that smiling face at Timmy’s? Meet Courtney Wagg

You wouldn’t know it to look at her, but Courtney Wagg is living a perfectly normal life with a disability.

You’ve probably seen her. I certainly have. Many times. She works at the Tim Horton’s on Hwy 11. She’s a busy bee. She can often be seen making her rounds, diligently emptying the garbage bins around the drive-thru and inside, too. But mainly she’s responsible for the inside lobby. She does a lot of cleaning and she’s never one to complain. She has big brown eyes and brown hair to match. Sometimes she’ll look up and see me. I usually smile. She looks like the quiet type, but friendly for sure. Once she told me she liked my hair. I always think to myself, hopefully that girl is appreciated at her job. 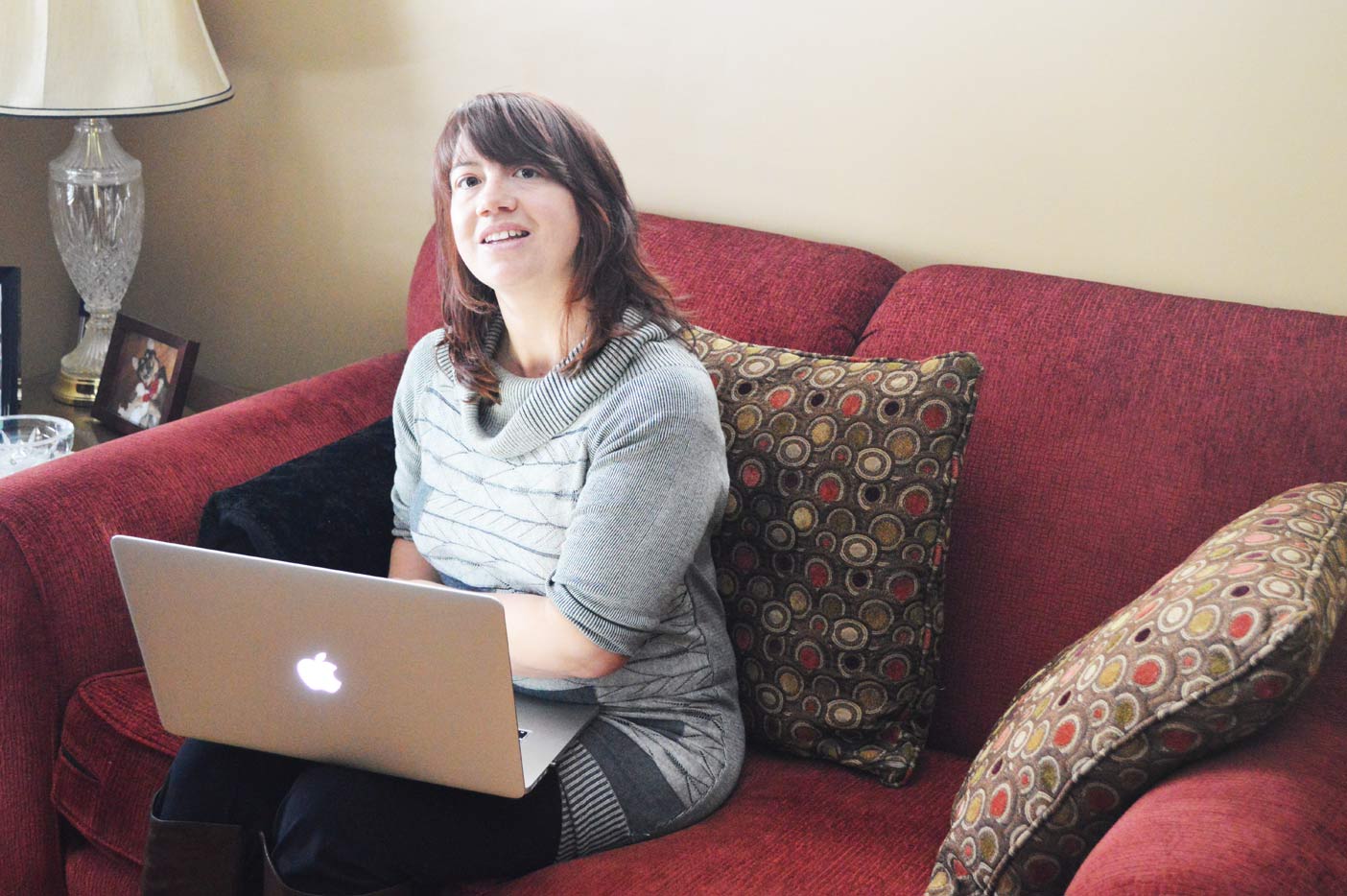 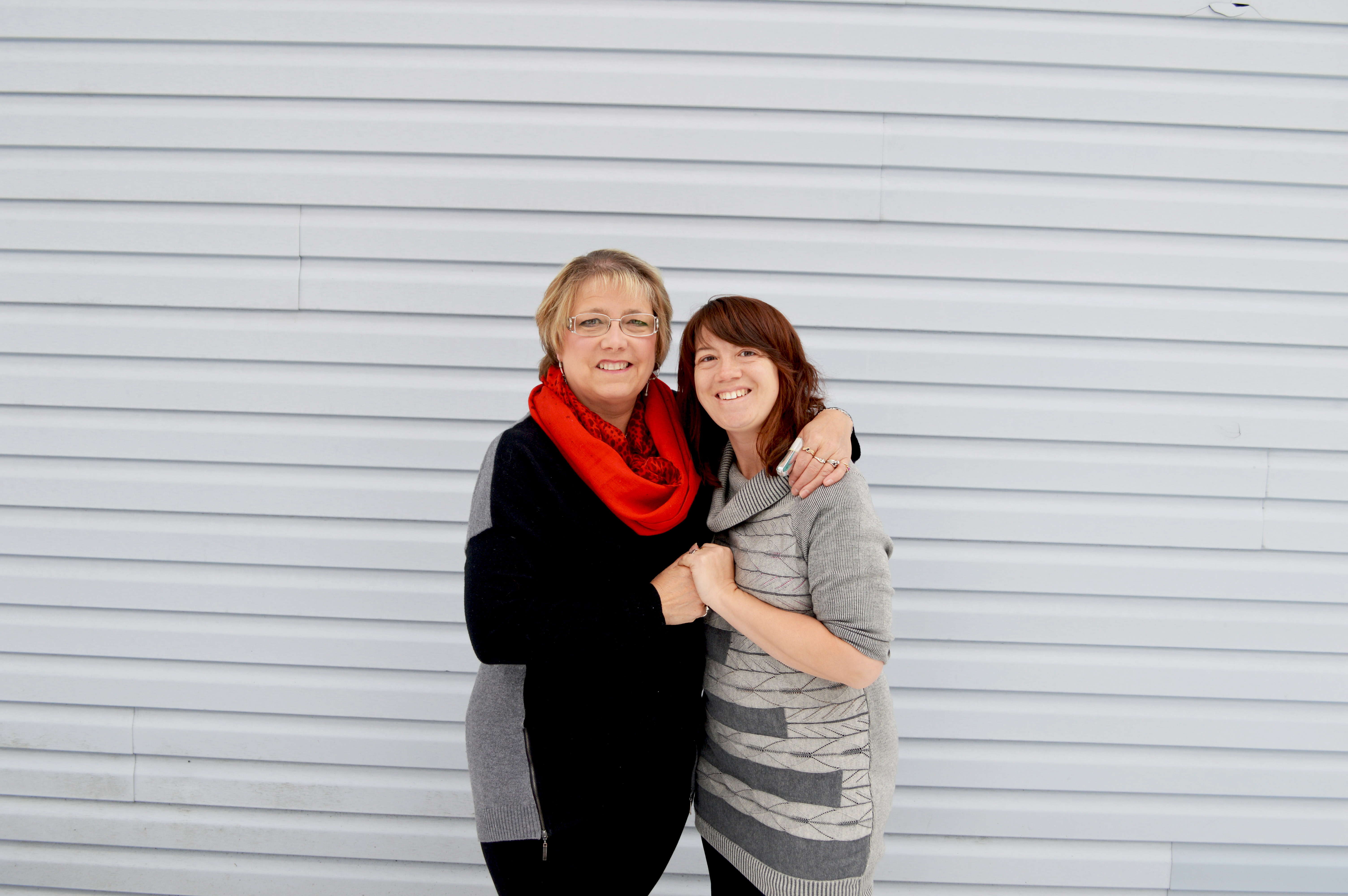 Anyone who frequents the Tim Hortons on Hwy 11 knows Courtney Wagg. Here (above left), she’s comfy on her couch at the Wagg family home. Computers are her thing. Courtney’s mom, Jean (above right with Courtney), has always been her biggest supporter.

She tells me she doesn’t mind emptying the garbage, even In the summer when the smell is rank from baking in the heat. The only thing that makes her upset is when people throw their garbage on the ground. She likes her job because she likes people. She’s been working there for the last 12 years.

Courtney has been living with Attention Deficit Disorder (ADD) for most of her life. It’s a neurobiological disorder that makes it difficult for people to control their behavior and to maintain their focus. To be honest, I didn’t even know ADD was considered a disability. Her mother, Jean, tells me that up until Courtney was about six, she was a thriving child who met or exceeded all her milestones. She was “flying around in a walker at six months” and walked and talked early. But then Jean starting noticing a change.

“Once she was into kindergarten, her development wasn’t on the scale it should have been,” Jean explains. “As a parent we didn’t see that. She wasn’t quite doing everything she should have been, but overall she was doing well. Finally, she was diagnosed by a doctor when she was about six. He told us she wouldn’t graduate from high school. That she’d be pregnant by the time she was in grade nine. I left his office crying.”

The way Courtney describes her early experience with the onset of her ADD is straightforward. Little things would set her off. She’d get mad and extremely frustrated. It was difficult for her to maintain focus on her schoolwork. Learning to read was a huge challenge for her and to this day she is still working on her writing skills.

I’d get really agitated when things didn’t go right… I would just get very angry. They [doctors]did a lot of tests because they didn’t know what was wrong with me. They gave me one pill. It changed my moods pretty bad. I wasn’t on it that long. Courtney Wagg

Having ADD and attending a regular public school meant extra take-home studies. Courtney also had to have an Educational Assistant by her side for learning purposes beginning in grade five. For Jean, it also meant bumping heads with a few teachers along the way. One teacher told Jean that he didn’t know how to teach Courtney. Courtney’s mom tells me about the bullying. It was pretty heartbreaking for Jean to watch her only daughter get picked on for something she had no control over. Kids, with all their sweet innocence, can be so cruel. Once, Courtney was pulled across the yard. Another time her backpack was thrown over the fence. Courtney even ran away from school. Luckily, she went to where she felt safe and ended up at her mom’s workplace.

In Courtney’s own words, she had a hard time making friends. She usually kept to herself. She spent a lot of time hanging out with adults because it was easier. She could communicate better with them. It’s like they understood her, she says. 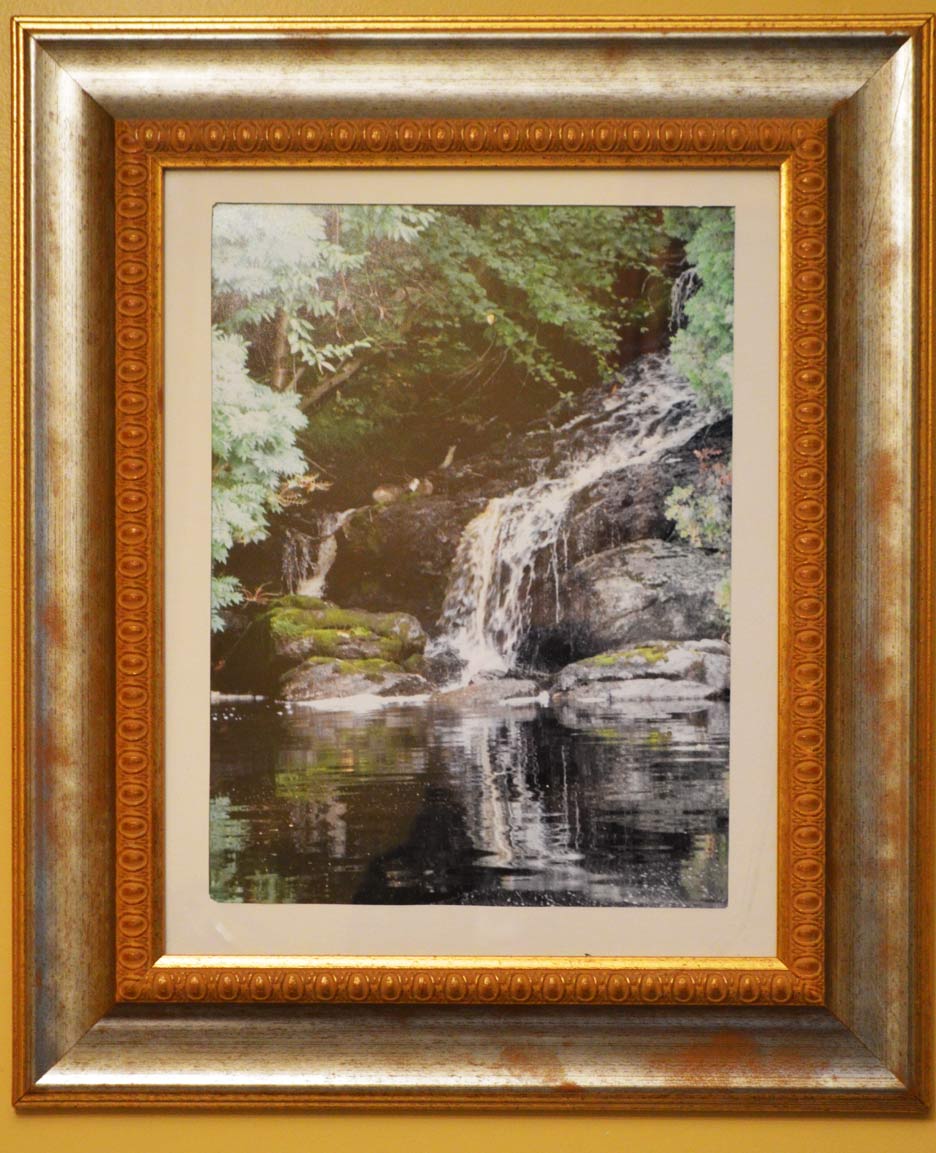 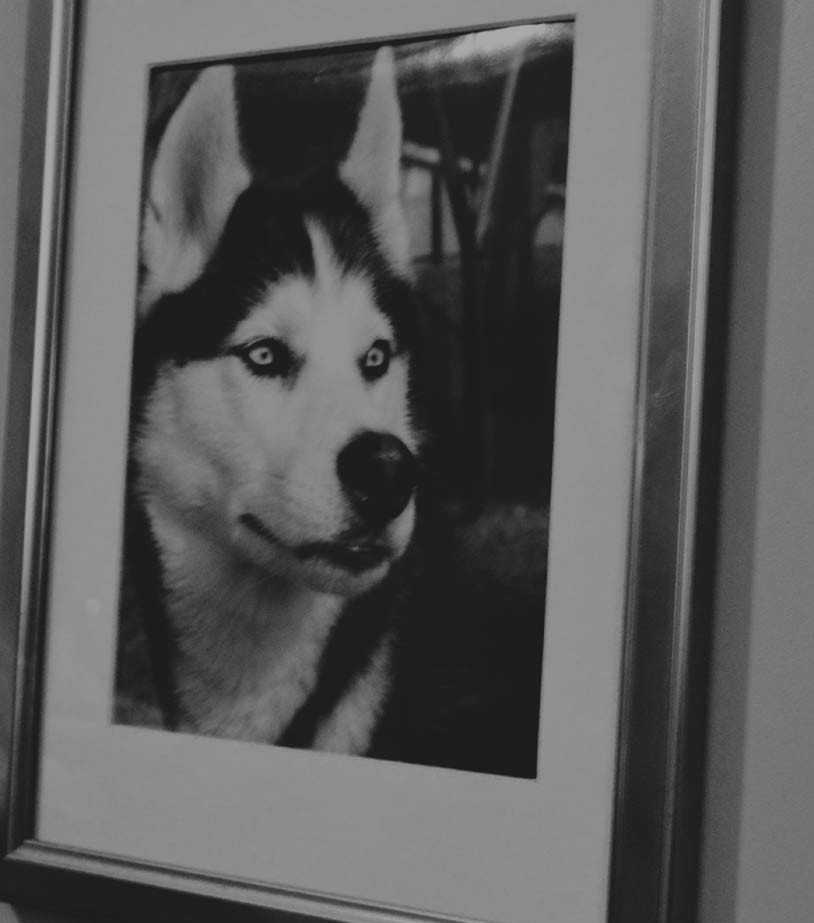 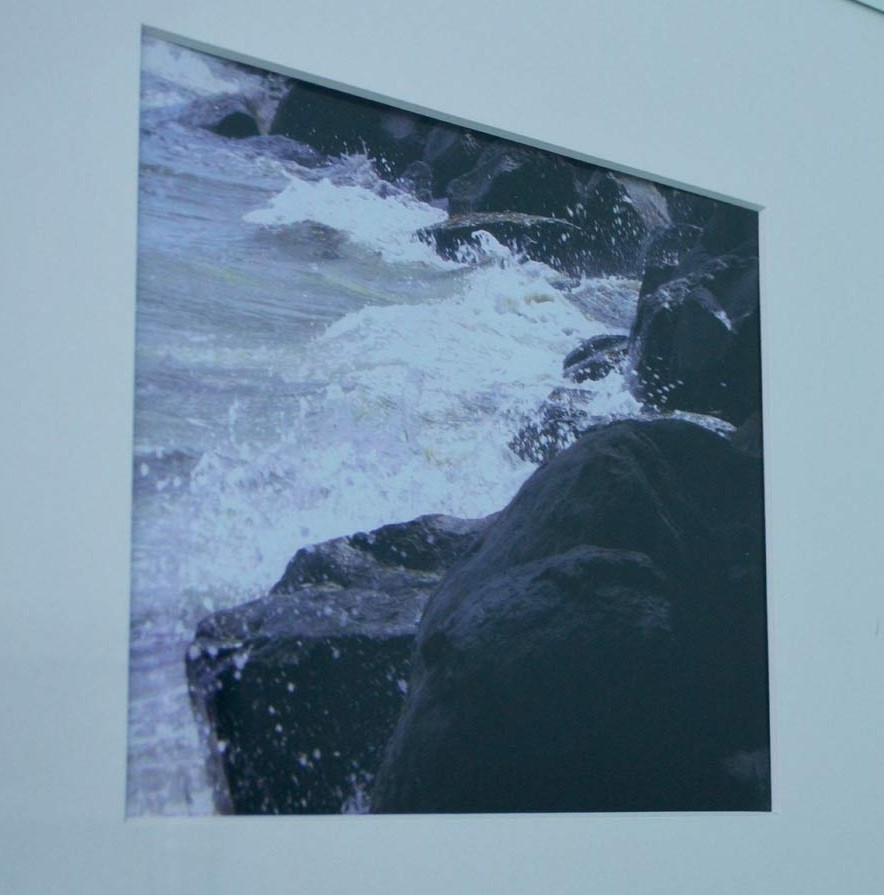 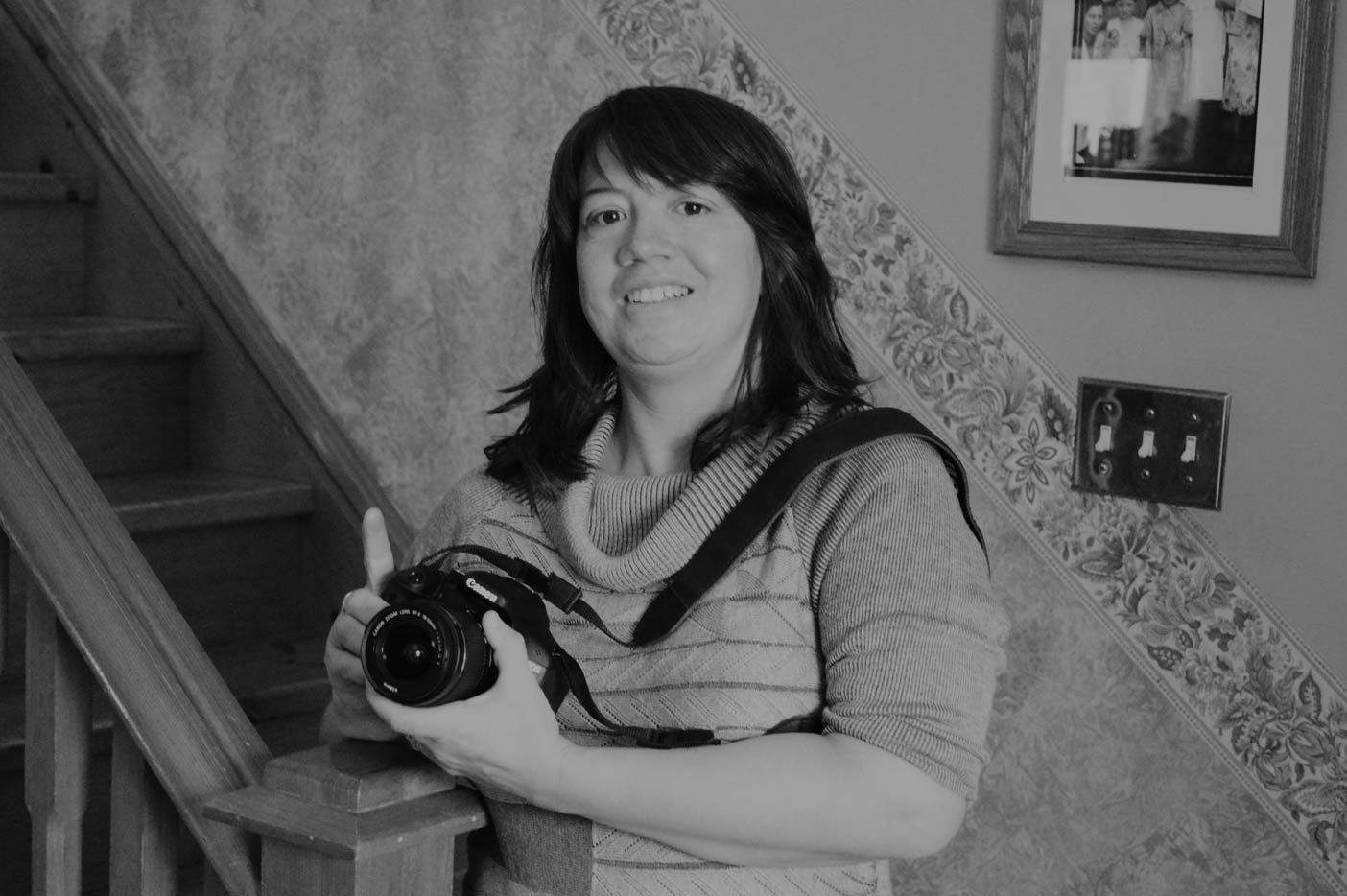 (Above) Courtney has a good eye for capturing some pretty amazing images on her Canon camera. A beautiful photo of a waterfall and other pieces of artwork displayed in her family home prove she might be missing her calling as a professional photographer. The neighbour’s dog has even been one of her subjects.

When she was 13, Courtney was diagnosed with scoliosis. She was required to wear a full body brace for 16 hours a day for two whole years. Every six months, the family headed down to SickKids Hospital in Toronto so a new cast could be made and adjusted to fit her growing body. To this day, Jean praises the hospital. It’s not only where the best and most caring doctors out there worked hard to correct the curvature in Courtney’s spine, but it’s where her learning disabilities were officially labeled as well.

She isn’t on any medication to treat her ADD. And what’s so remarkable about Courtney is that she has learned to deal with it, in her own way. Stepping away from a situation that gets her all worked up is usually the best remedy. She’s a working woman in her 30s now. She pays rent to her parents. Courtney has a lot going for her. She has an amazing eye and has found a hobby as a budding photographer. Dozens of framed photographs (or artwork as her mom calls it) line the walls in the Wagg family residence. She’s computer savvy and loves anything to do with electronics.

“Courtney has a heart of gold. She’s a hard worker. She’s independent… more independent than I am. In my own eyes, I have a lot of pride in my daughter. That’s the best way to sum it up.”

If you enjoyed reading about this extraordinary person you may be interested in these stories as well:
Happy and healthy, this eco-friendly mom spreads the love
This Wolfe leads the pack by example