You are here: Home / Entertainment / Traversing Wild premieres at the Algonquin Theatre on May 19

TICKETS FOR TRAVERSING WILD ARE AVAILABLE AT THE ALGONQUIN THEATRE, DOORS OPEN AT 6:30PM

Why would someone push themselves to exhaustion, going head-to-head against a wilderness that doesn’t care if they succeed? Documentary filmmaker Joel Perella aims to answer that question in Traversing Wild, which  follows seemingly normal people as they go beyond their perceived limits to bike, run and paddle to the finish line of a 150-kilometre expedition race in just 24 hours.

Set in the backcountry near Parry Sound, Traversing Wild examines what drives those adventurers; what makes them heroes, if only among a small group of people; and what the rest of the world thinks of their attempts to traverse the wild.

Algonquin Outfitters is hosting the premiere of this documentary, your chance to see it in its entirety before it hits the film circuit in shorter form. It happens for one night only – Friday, May 19.

Perella said he decided to take on the project because the spirit of the racers, who essentially get lost for up to 30 hours, really captured his attention. “Fifty per cent of them don’t finish but they love the challenge,” said Perella. “There’s big camaraderie.”

The film is centred around four, university-age people who did the Wilderness Traverse four years ago and “did quite well”. Their story is unique in that most of the competitors are older.

So what’s it like to try to film adventure racers as they make their way through the bush? In a word: challenging.

The crew members involved in filming Traversing Wild have all been adventure racers so they knew what they were getting into. They were given a map of the race route and were tasked with capturing as much footage as they could, a job easier said than done.

“The biggest challenge is finding the teams,” said Perella. “You go to the transition areas but the real story is what happens on course. It’s difficult to find them – they’re faster than we are going through the bush. You don’t know what you’re going to get, but what came out was amazing imagery.”

Competitors were provided with GoPros, which Perella said provides some comic relief footage.

With hours and hours of film, Perella then had to wade through it all to select the moments that would tell a compelling story. “It’s more than just ‘they came out, they worked hard, they won’.”

He’s been asked to film the race again this year, but in the meantime he’s getting Traversing Wild ready for the film festival circuit. The premiere at the Algonquin Theatre will be a rare chance to see it in its entirety.

“I hope people enjoy it,” said Perella. “We had a good time putting it together. To learn more about how these people operate – it’s inspiring. We hope we can instill some of that inspiration (in the audience) –you can try a race, but it’s also how you look at challenges in day-to-day life.” 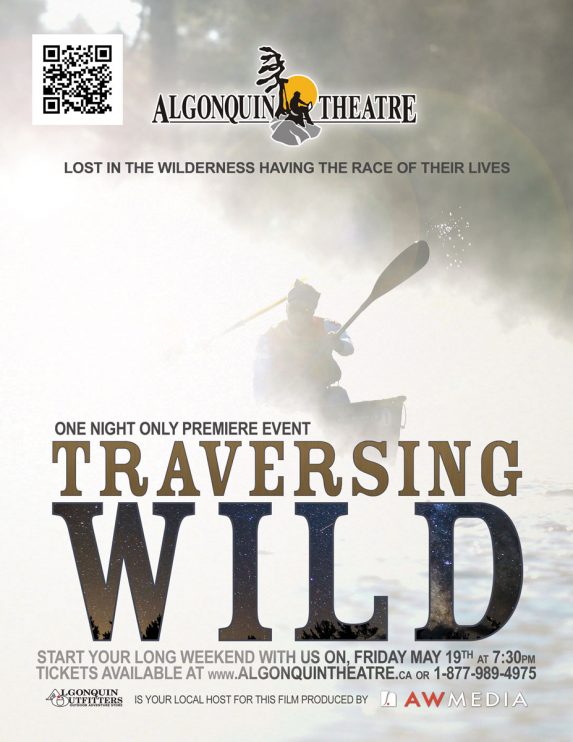