You are here: Home / Uncategorised / A Sponsored Profile / Totem Juice Company: from seed to bottle and back again

A Huntsville couple are putting good health at the fingertips of locals with a new business. Brent and Rebecca Ellerson started Totem Juice Company after making a lifestyle change that they realized they could share with others.

“Right around the time our son, Jack, was born, we realized we were mortal,” laughs Brent. “We needed to stick around for our kids and be good role models.” They had also just watched the documentary Forks Over Knives – a film that touts the health benefits of rejecting animal-based and processed foods – and were inspired by its message.

Cold-pressed juice is a trend right now. But yoga was a trend on the fringe once…

They switched to a mainly organic, whole-foods, plant-based diet for their son but a busy schedule didn’t allow them to completely follow suit. “We were blending and freezing our own organic baby food, but at the same time we’d eat a pizza for dinner because we were so busy. We realized we couldn’t be saying one thing and do another.”

The Ellersons began making smoothies and juices as an easy way to fill in the gaps in their diet. Then, a year and a half ago, they offered to lend Jenny Spring of The Spring Farm – a local, urban farm – the empty plot of land beside their house in town. “It was a vegetable lease – we gave the land and she gave us weekly vegetables. Some of the produce went straight from the garden to our kitchen and then the pulp went right back to her garden compost.”

Rebecca and Brent soon realized that they could sustainably do the same thing on a larger scale and a business idea was born. They developed flavours and built a juicer adjacent to the garden. They now buy their produce from The Spring Farm’s plot in season and juice 1500 pounds of it every week. The pulp – 700 to 800 pounds of it – is returned to the garden’s compost, often the same morning.

The process as local as you can get. Jenny and Oliver from The Spring Farm pick the produce from the garden in the morning and walk it over to the juicer. It goes through a washing process – rinse, sanitize, wash – before going into the juicer, a large, hydraulic press that applies 11,000 psi of slow pressure to extract the juice. “Cold-pressed juice keeps the cells and enzymes intact,” explains Brent. “When you use a blender, the chopping slices the cells and even the small amount of heat produced by a spinning blade starts to denature the enzymes. The cold-press process keeps the cells and enzymes alive and we bottle them right away. No one is doing seed-to-bottle as fast as we are.”

It’s incredibly efficient, but it begs the question: what happens in the winter?

Herbs and small greens will still come from The Spring Farm’s greenhouse and indoor grow lights. The rest of their organic produce will be sourced from Pfennings, an organic farm near Waterloo, and Toronto’s food terminal. It’s a necessity that takes a toll on a small business. “In the winter our costs go up substantially – as much as 40 per cent,” says Brent. “It’s difficult to set standard pricing when there’s that much difference between summer and winter.”

The equivalent of five or six good-sized salads – two-and-a-half pounds of produce – goes into every bottle of Totem juice. “You can get six to seven of your daily 10 servings of vegetables on the run.” It’s a concept that’s been well received by local shoppers to their juice bar behind The Great Vine on Huntsville’s Main Street.

“I think the trust is gone in the big corporations,” says Brent. “People are turning back to conscious, reliable sources of food. You know the people you’re getting your food from that way and there are measures of control. You can ask questions – where did the beets come from, can I see them? Yes, you can. And we can even ask the farmer about the soil they grew in.” About 65 per cent of the company’s business comes from locals with the remaining 35 per cent comprised of cottagers and visitors to the area.

Brent also believes that younger generations are becoming more conscious of food choices because they are seeing older relatives getter sicker at younger ages than previously. “In the 1970s and 1980s, the fast food movement wasn’t created with health in mind. People are switching to being more preventative.”

The trend to healthier lifestyles is one Brent is happy to see and they’re riding the wave at its leading edge. “Cold-pressed juice is a trend right now. But yoga was a trend on the fringe once – a lot of people thought it was strange but now it’s everywhere. Health-based, simple trends are awesome. Our next step will be shortening the seed-to-bottle time in elite freshness even more. We want to get ahead of that curve.”

TOTEM Juice Bar (aka ‘The Juice Box’)
36 MAIN STREET EAST — P1H 2C8  HUNTSVILLE ONTARIO  (705) 380-4354 hello@totemjuice.com
(Down the boardwalk connected to the back of our partner ‘The Great Vine’ natural health store) 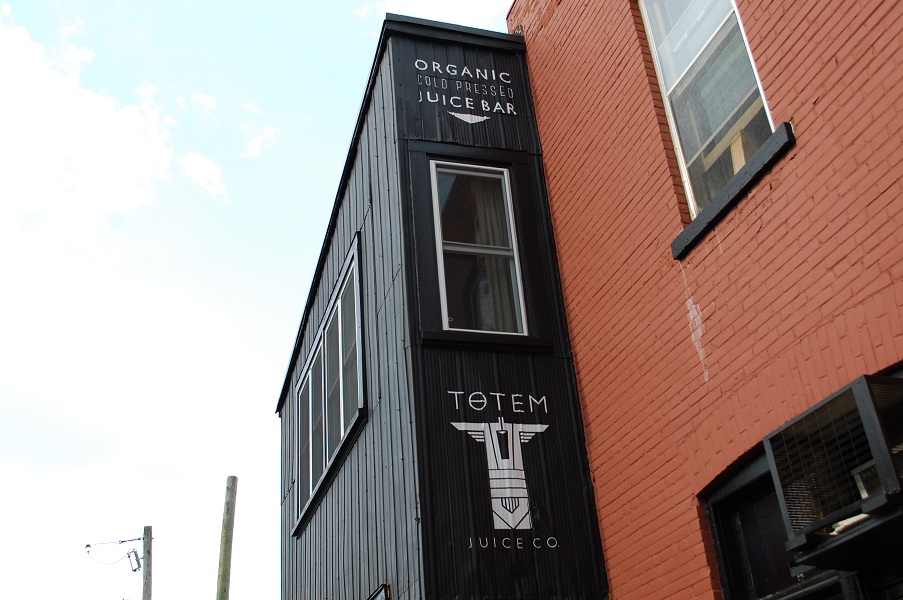 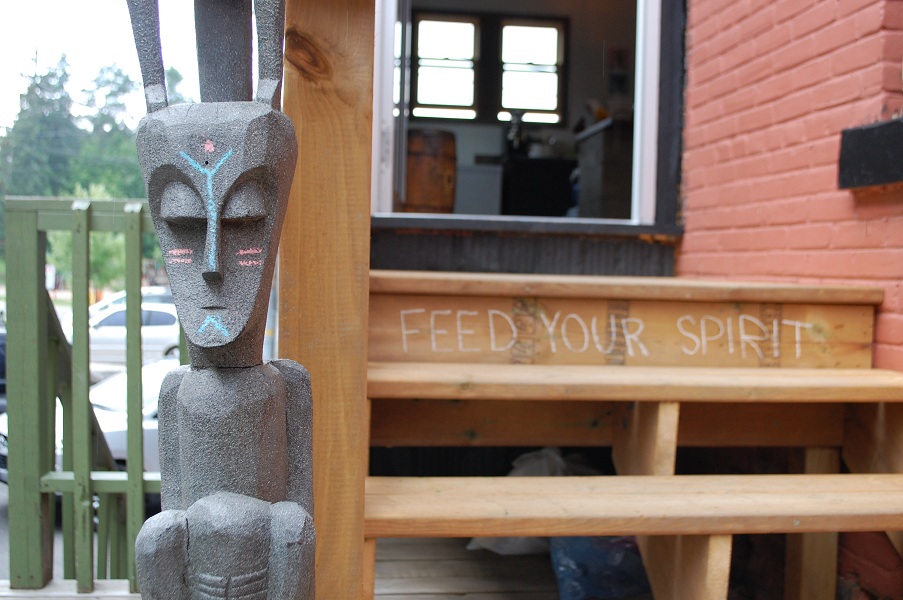 Feed your spirit with Totem Juice 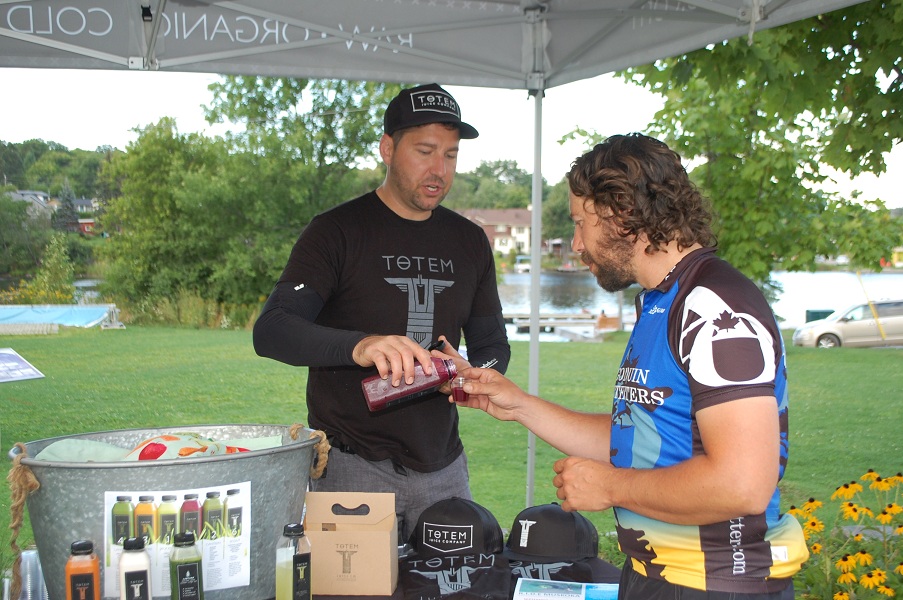 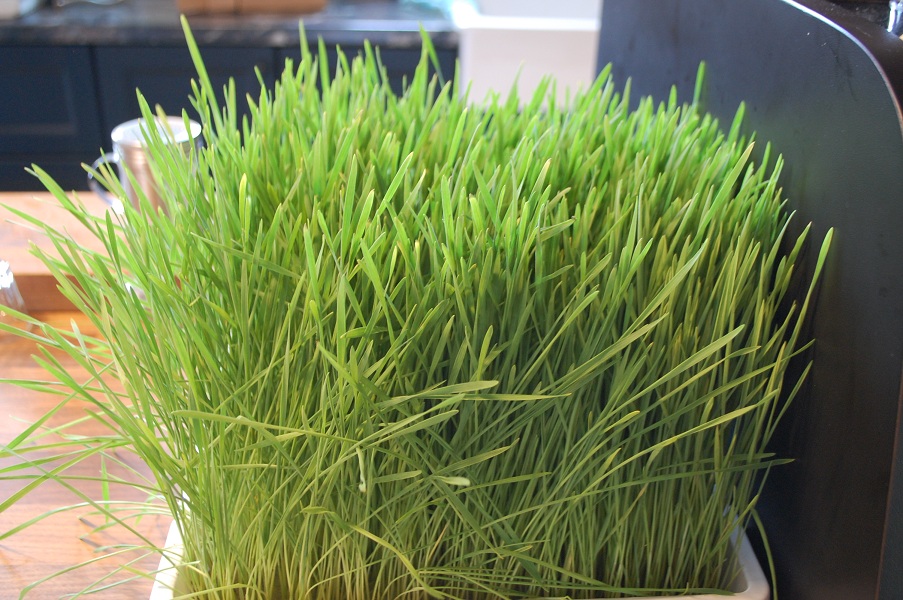 Fresh wheatgrass graces the counter of the juice bar 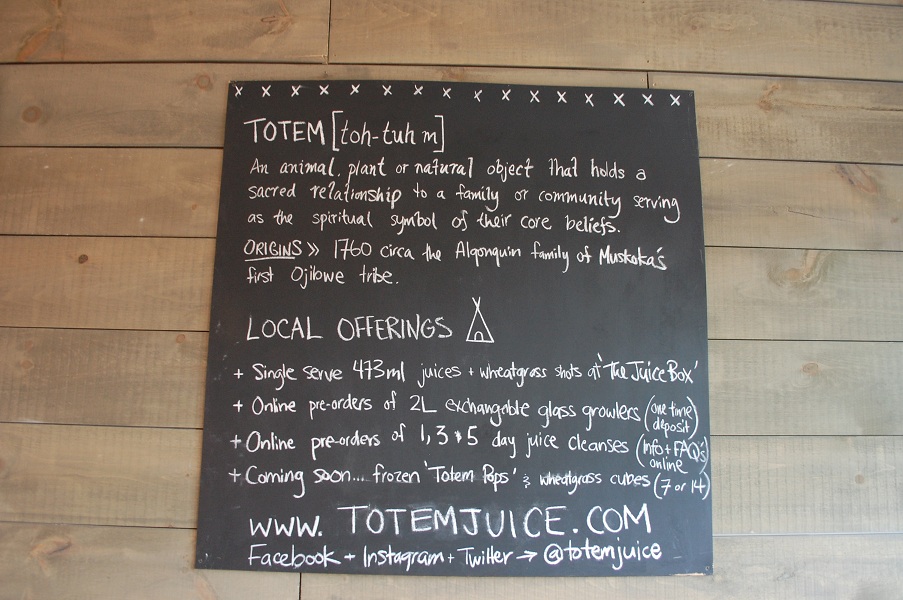 A menu board at the Totem Juice Company juice bar