You are here: Home / Community / The Canadian Ski Patrol is about more than winter skiing

Don’t let the name fool you – the ski patrol isn’t just about skiing.

The Canadian Ski Patrol is an organization of mostly volunteer first-aid responders created in 1941 by Dr. Douglas Firth. Back then, they were a solely a first aid and rescue group that patrolled ski hills, coming to the aid of injured skiers. Fast forward to 2015 and you’ll find the ski patrol active in their communities year-round. Not all of them are even skiers.

Locally, you’ll see them on the slopes at Hidden Valley Highlands Ski Area and on the Nordic and skating trails at Arrowhead each winter, but they also provide first aid support at events like Ironman Muskoka, Ironman 70.3, Muskoka River X, Band on the Run, and Huntsville DockFest, and offer basic first-aid training.

“Nationally there are about 5000 Canadian Ski Patrol volunteers,” said Jodie Marc Lalonde, Canadian Ski Patrol Muskoka Zone VP of Operations. “Locally we have more than 30 people who put in thousands of hours a year to help people in our community, both on the slopes and off.”

Three rookies have just started this year’s training – a 60-hour course that culminates in an exam and practical skills test. There’s an abbreviated course for those who are already health care practitioners. It’s not too late for new recruits to join but they’d need to sign up very soon, he said. Returning volunteers re-certify annually. “We are first-aiders who actually use our first aid training.”

Funding for their operations – primarily equipment costs – comes from local fundraising. The annual Thanksgiving ski swap and sale at Hidden Valley Highlands Ski Area is part of that. They also ask for an honorarium for the community events they provide first-aid support to.

This season, Muskoka Zone ski patrollers will be replacing their familiar blue and gold uniforms with red vests or jackets emblazoned with white crosses. The change is the result of a nation-wide rebranding of the Canadian Ski Patrol. It happens just in time for celebrations in 2016 to commemorate the ski patrol’s 75th anniversary.

You can support the local ski patrol and get some new or gently used ski gear at this weekend’s ski swap and sale. Gear drop off is on Friday, October 9 from 6-8pm or Saturday, October 10 from 9am-12pm. The sale runs Saturday, October 10 from 9am-4pm and Sunday, October 11 from 10am-3pm at Hidden Valley Highlands Ski Area, 1655 Hidden Valley Road. The ski patrol is holding a clothing drive at the same time in support of their national organization. Bring 30 pounds or more of gently used clothing in clear bags and be entered in a national draw for a ski trip to Big White.

For more information on becoming a ski patrol volunteer, visit www.skipatrolmuskoka.ca or call 705-788-4918. 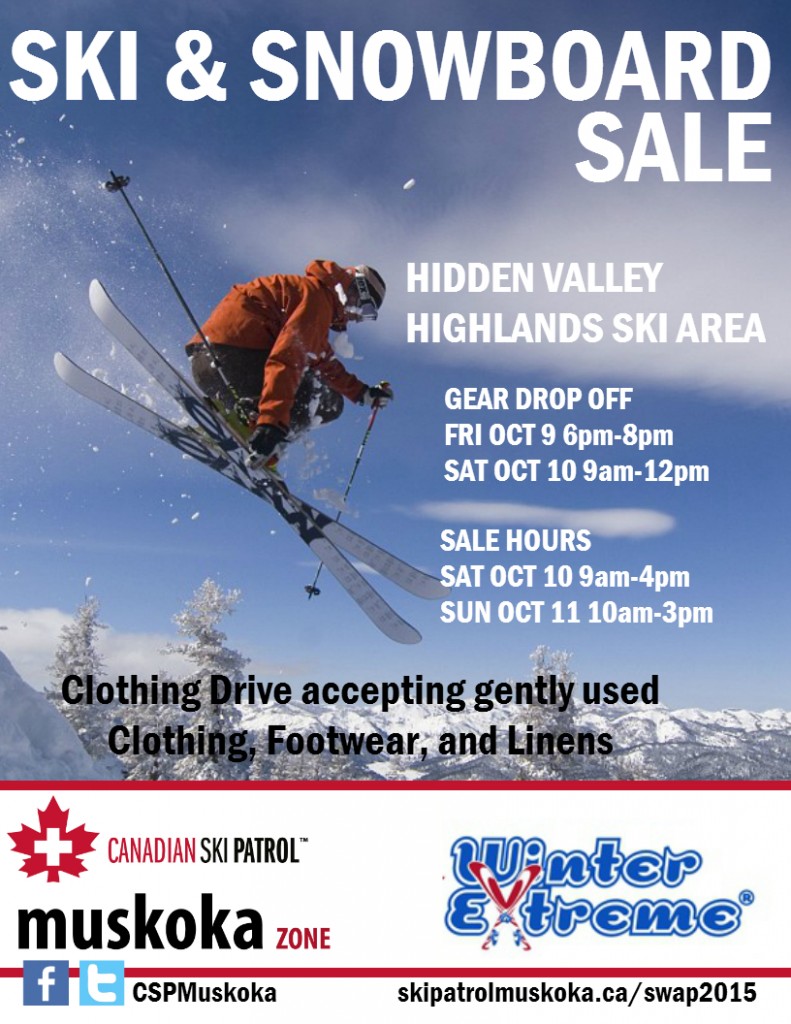