You are here: Home / Commentary / The basics of climate change explained for non scientists ~ Hugh Holland

Scientists have shown that a growing layer of greenhouse gasses (including CO2 from burning fossil fuels) is collecting in the atmosphere, acting as a greenhouse and trapping an increasing amount of heat from the sun. When white glaciers and white polar ice that normally reflect heat are melted, they expose dark surfaces that absorb more heat, and both the warming and the melting are accelerated. 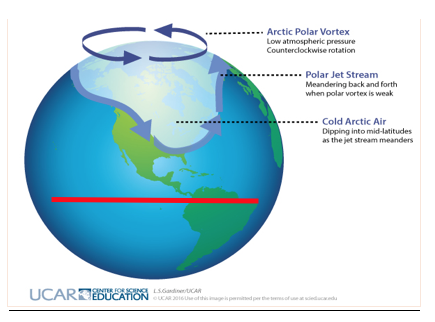 The polar vortex is a mass of low-pressure cold air swirling like a whirlpool (vortex) above the earth’s poles. (It is about 1,000 km in diameter)

Natural convection tries to push the rotating mass of high-pressure hot air from the equator towards the poles, thereby constraining the polar vortex to their normal north and south polar locations.

The interface between the rotating masses of cold and warm air is called the jet stream.

Rapid polar warming is reducing the temperature differential between the poles and the equator, thereby destabilizing the jet stream and causing the polar vortex to intermittently push masses of cold polar air to mid-continent, followed by bursts of warm equatorial air moving toward the poles.

80 per cent of the extra trapped heat is absorbed in the waters that cover 70 per cent of the earth’s surface, resulting in thermal expansion that raises sea levels.  According to the US National Ocean Service, sea levels have risen 2.6 inches in 21 years, but that rate of rise will increase exponentially as more ice melts and more dark surfaces are exposed.  This will make low-lying coastal and inland areas (including 1,000 inhabited islands, eight of the world’s 10 largest cities and 40 per cent of the US population) more vulnerable to storm surges, large-scale flooding, soil erosion and damage to all types of infrastructure.

Effect of and on People

The world’s leading climate scientists have been ringing alarm bells for 30 years. But climate change is complex, so it takes time and effort to understand it.  Every year is different, so erratic patterns of occurrence have made climate change hard to prove and easy to ignore and deny. But rapidly increasing evidence is now making the picture much clearer.

The world is trapped in a classic dilemma. We will not achieve emissions targets and curb climate change with half measures. We need to implement every feasible management tool and technical solution to conserve energy and to rapidly reduce our dependence on fossil fuels, but not before fossil fuels can be replaced by clean energy sources.  A world of eight billion people simply cannot function without energy.

People like to complain about the cost of energy, but average families now spend more on their digital devices than on energy. We could survive without the internet. We cannot survive without energy.

It is easy to blame the politicians, but we the voters allow them to hoodwink us with attempts to differentiate themselves from other parties. For 30 years, the NDP and the Greens have spread irrational faith in wind and solar power which can help but will never replace coal, and they have spread irrational fear of nuclear power which is the only clean, safe and reliable source of energy that can replace coal.

In my view, the federal Liberals have the most realistic balance between the environment and the economy. It will take the world a few more decades to replace oil, so the current government is working to get the needed pipelines built – – but in the most environmentally responsible manner. The current review should result in approval of the Trans-Mountain pipeline by the end of June.  The universal carbon tax engages all end consumers in both energy conservation and the shift to clean energy.

The Conservative’s approach at both the provincial and federal levels is to put the entire burden on industry. That is equivalent to punishing farmers when people eat too much of the wrong food. With the Conservative’s approach, both energy conservation and the shift to clean energy will ultimately take longer, cost more, and will indeed make Canadian industry less competitive with the US.

So far, Ford’s environment plan consists of a list of disconnected ideas with few specifics and little thought as to how one idea will impact others. For example, increaing the speed limit will mean 11 per cent more fuel consumption and emissions (Aerodynamic drag increases dramatically with speed). The fight will start as soon as the government picks which industries will carry the burden.  Why has Andrew Scheer not revealed his environmental plan?  Like Ford, he will reveal it just before voting day with the hopes that he can defeat the Liberals with distractions on other issues.

The only thing that matters to the Trump administration is money and the stock market.  China is the biggest source of carbon emissions, but they are also more advanced in the shift to electric vehicles along with a widespread network of universal charging stations.

Climate scientists are now telling us we have 12 years (three election cycles) to act if we want the next generation to avoid the most devastating effects of climate change.  It’s time to replace petty self-serving politics with serious national and international cooperation and action to mitigate and adapt to climate change. Arguing that the other guy should start first is as futile as arguing for the best deck chair on the Titanic.  Yes, we will have to pay more now because of foot-dragging for the last 30 years, but you won’t like the alternative.