You are here: Home / Community / Strumming straight from the heart

When you’re young you don’t know where you’re going to end up. For years, you hang out with the same group of friends. But as you get older, life tends to take us down different paths. That’s just the way it goes.

I stay connected with hundreds of my old school buddies through Facebook. Clayton Earl is one of them. I went to public school with him for a few years. I graduated high school with him. At one point, I think we were even a couple. But that was a long time ago.

We haven’t really talked in about 15 years. Now we’re both 33 and have two kids. I’ve been hearing lots about him lately. What caught my attention recently was an Indiegogo campaign that he’s initiated. He’s hoping that through generous donations from the community and anyone else who’s willing to support his cause, that he’ll be able to reach his fundraising goal of $5,000 in order to put out his debut album titled Now You Know Me, which will also come packaged with a special documentary. The documentary will give listeners an inside look on the making of the album and aims to raise awareness on mental health issues. One dollar from every package sold will go toward the Canadian Mental Health Association. But no one will know exactly what it’s about until its release. He doesn’t want to let the cat out of the bag. If it has an impact on just one person, then that’s a great thing.

A while ago, I saw a YouTube video of his one and only released song to date I Need You, which he wrote about his mom, who passed away from cancer in 2002. It’s catchy and definitely a tune you’ll want to listen to again and again. I didn’t know he could play the guitar let alone sing.

He tells me it didn’t come easily. Unlike playing sports, which came naturally to him, music was something he had to put a lot of heart and soul into. But at a pivotal moment in his life he was drawn to pick up the guitar. He was simply looking for a new outlet to channel his energy and emotions.

“I really had to work at it,” he tells me of becoming musical not that long ago. “My mom had bought me a guitar when I was kid and I’d always get frustrated and it sat around the house forever, untouched. One time when I was living in Kingston, that guitar got stolen out of the house I was living in. Years later, I saw the same model of that guitar at a garage sale. If that wasn’t a sign I don’t know what is. I bought it for $30. That’s the day I started playing.”

He hasn’t put it down since. He promised himself he wouldn’t. Every day for a whole year, whether it was for a 10 minutes or a couple hours, he played. He learned from books for beginners, watching YouTube videos and from taking a handful of lessons from local musicians Tobin Spring and Sean Cotton.

Once he got the hang of playing the guitar, he started to write his own songs. (His CD will feature 11 original tunes.) He looks within and uses significant events and people, like his wife and kids, and everyday situations as the sources for his inspiration.

At first, he wasn’t too keen on singing, though. He would invite Tobin over to his house to sing what he had written. His other musician friends encouraged him to try singing. He took a shot in the dark and set aside his insecurity. Being able to sing and play the guitar at the same time was more difficult than he thought. But it’s true, Clayton will tell you, practice makes perfect.

He started attending open mic nights at On the Docks Pub and that led to him being featured on Hunters Bay Radio’s Talent on the Bay. He then took the stage for live performances with James Gray (who will be producing his upcoming album) and Scott Gilson for Sunday Sessions at the Studio Theatre at Chaffey Hall.

The more he performed, the more comfortable he got in front of an audience. Eventually, he started booking gigs. He’s played at The Mill on Main, the Huntsville fairgrounds, Community Living Huntsville and a bunch of other venues around Muskoka.

I still can’t stand to hear myself. I think a lot of musicians are like that.

From the very start, his wife has always been one of his biggest supporters and his two kids often join their dad for a family jam. 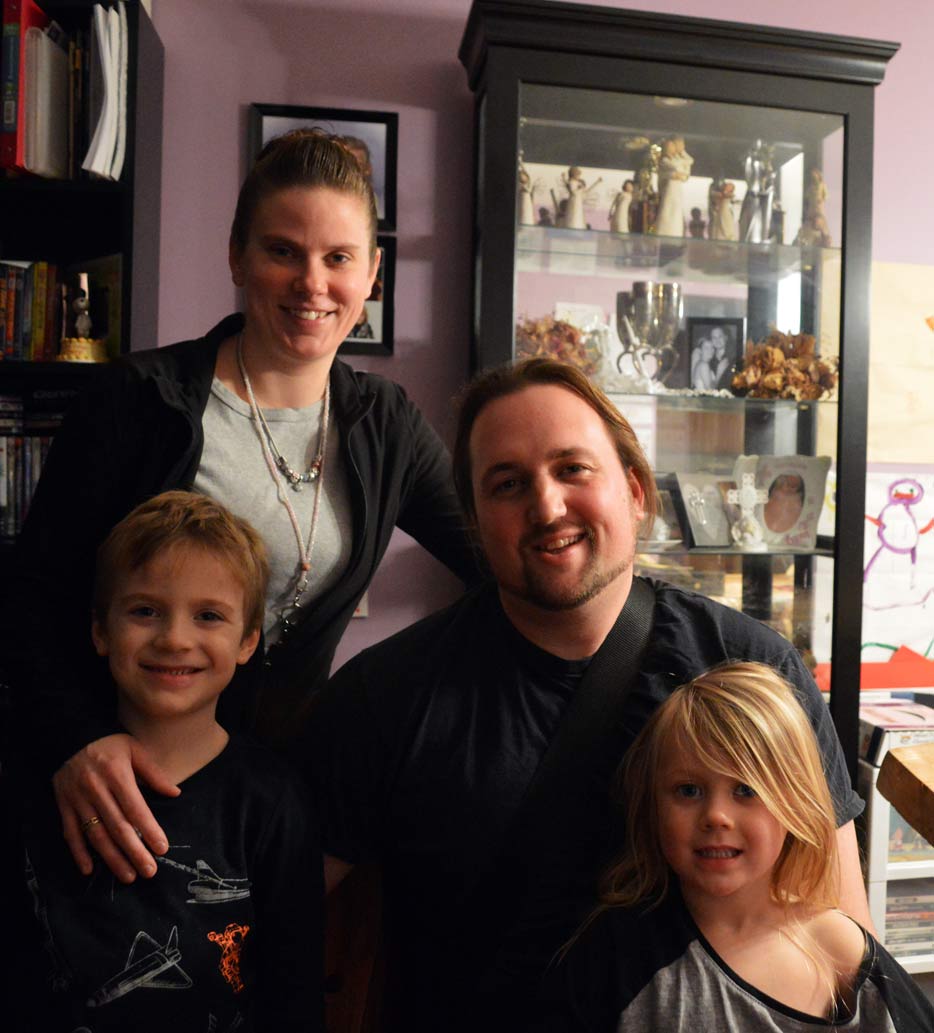 Clayton at home with his wife Leslie-Anne and kids Jake and Jordyn. 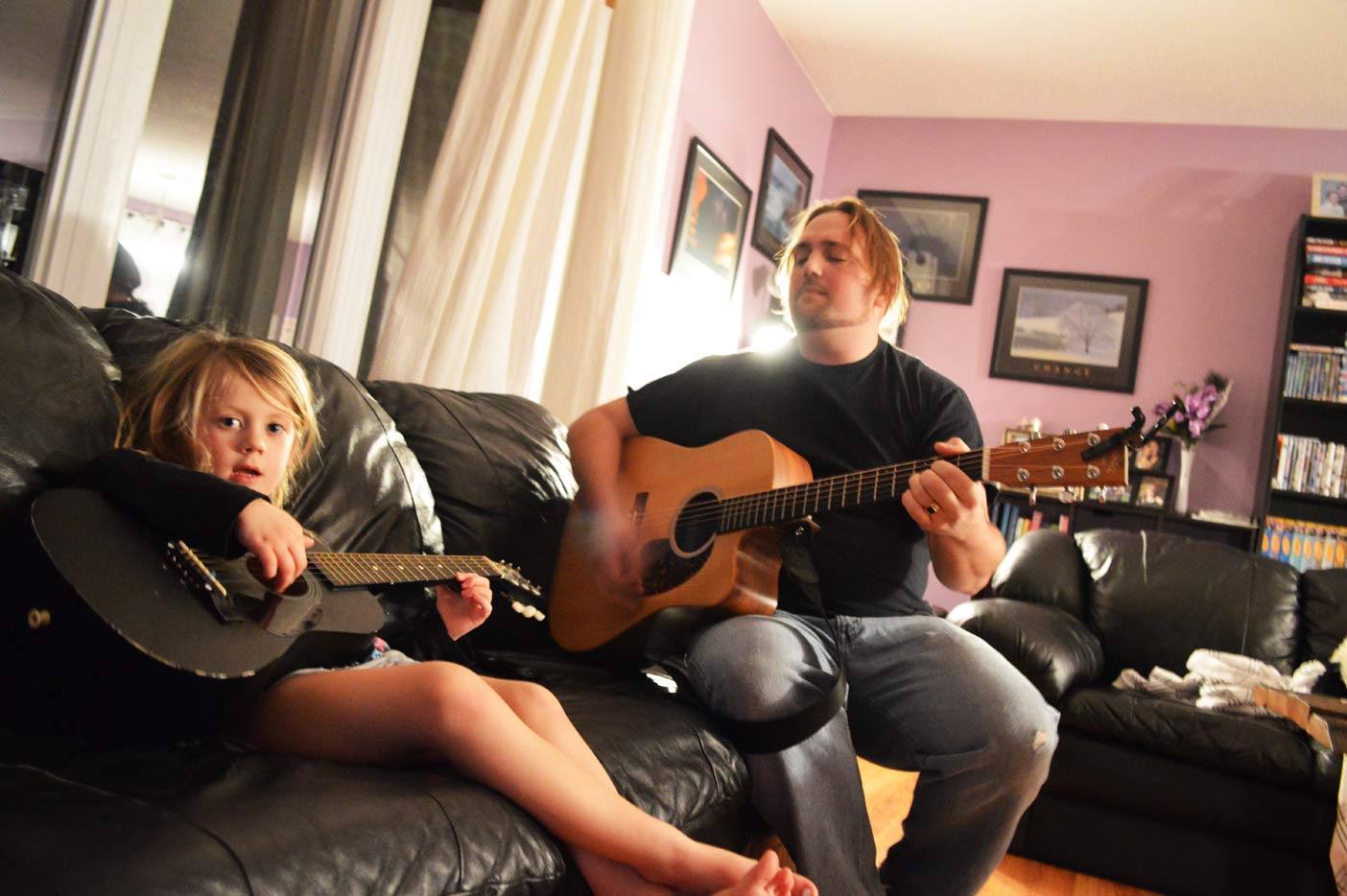 His daughter loves playing guitar with her dad. They rocked an awesome version of Wagon Wheel.

In between his business as a cleaner and a part-time server, he also teaches beginner guitar lessons.

When asked why after so many years of forgetting about that first guitar his mom got him and the frustration that accompanied when he would try to play, that he was finally ready to give it his all, he replies:

“I was a lot more patient this time… probably because I have kids. I was able to exercise patience to be able to learn the guitar and I was determined not to give up. It was a natural progression for me. I started getting better at playing, then a little better at singing. I’m five years deep doing this and not stopping any time soon.”

Currently, Clayton is working on finishing his album which is being produced by James Gray, who, over the last few years, has become a good friend of his and has been a “real believer” in Clayton’s music from the start. Mark Boucher, who has also directed and produced a few other music videos and documentaries, is working on Clayton’s documentary, and just released a trailer for it on Wednesday. (To view the trailer visit his campaign page at www.indiegogo.com/projects/now-you-know-me#/).

Clayton is anticipating a release for his CD and documentary this summer.

He has four gigs booked so far for 2016. Keep up with what Clayton’s doing on Facebook at Clayton Earl Music.