Thanks to a committed group of volunteers and strong community support, Huntsville is one step closer to welcoming a Syrian refugee family. One of the first hurdles for Syrian Refugee Sponsorship (SRS) Huntsville, the local group hoping to sponsor a family, was raising the $20,000-30,000 needed to support a refugee family for the one-year sponsorship commitment.

At the end of last week, the group was closing in on $10,000 raised. The Muskoka Mindfulness Group contributed $2,500, the United Church granted the sponsorship group another $5,000, and students in Huntsville High School’s Interact and Me To We clubs raised about $500, said Louise Parkinson, communications chair for SRS Huntsville. The Aspdin Community Hall Board also made a donation to the cause, at the urging of the group’s secretary, Thelma Beaudry. “I advocated for it because I think we have a responsibility to,” she said. “It was a struggle on some level because we try to keep our efforts local, but this is a big deal.” The board voted to donate $1,000 in surplus funds to SRS Huntsville.

And then a local man stepped up with a donation of $28,000 to put the group well beyond its goal.

“I got this email asking how our fundraising was going,” said Parkinson. That email was from Bob Nunn, and he told Parkinson that he and his wife Jackie were going to donate the full $28,000 that the group was striving for. “He said that his parents were immigrants, so he has those values of making a better life in a new country,” said Parkinson. “And although he was initially on the fence about it, he said he was really sick of seeing the negative publicity – the racism, people calling every Syrian a terrorist – and he had this urge to do something to stop the tide.”

Donations are continuing to arrive and the committee will need to decide what to do with the extra funds raised.

It could be that we sponsor more than one family or we could sponsor a larger family, which could be hard for some communities to accommodate.
Louise Parkinson, SRS Huntsville Communications Chair

There are fundraisers being planned by SRS Huntsville for the new year and local public schools – Huntsville Public, Muskoka Montessori, Pine Glen, Spruce Glen, and Tawingo College – have also expressed an interest in helping.

So that community members can learn more about the process, SRS Huntsville is hosting an information session on December 1 at 7:00pm at Trinity United Church. A representative from AURA, the refugee sponsorship group that the committee has applied to, will be available to answer questions. AURA is a branch of the Anglican Diocese of Toronto and the Toronto Conference of the United Church of Canada, and is a Sponsorship Agreement Holder (SAH) with the Canadian Ministry of Citizenship and Immigration.

“Hopefully the meeting will create some momentum,” said Parkinson.

In addition to financial donations, the group will need volunteers for various tasks, such as driving the family to appointments, helping with accommodation and house hunting, and introducing the family to various community activities, as well as donations of clothing and household items. At a recent SRS meeting, a member of the Huntsville community donated an entire condo full of furniture and appliances which will be stored until a family arrives.

For more information about SRS Huntsville, visit their website www.srshuntsville.com. 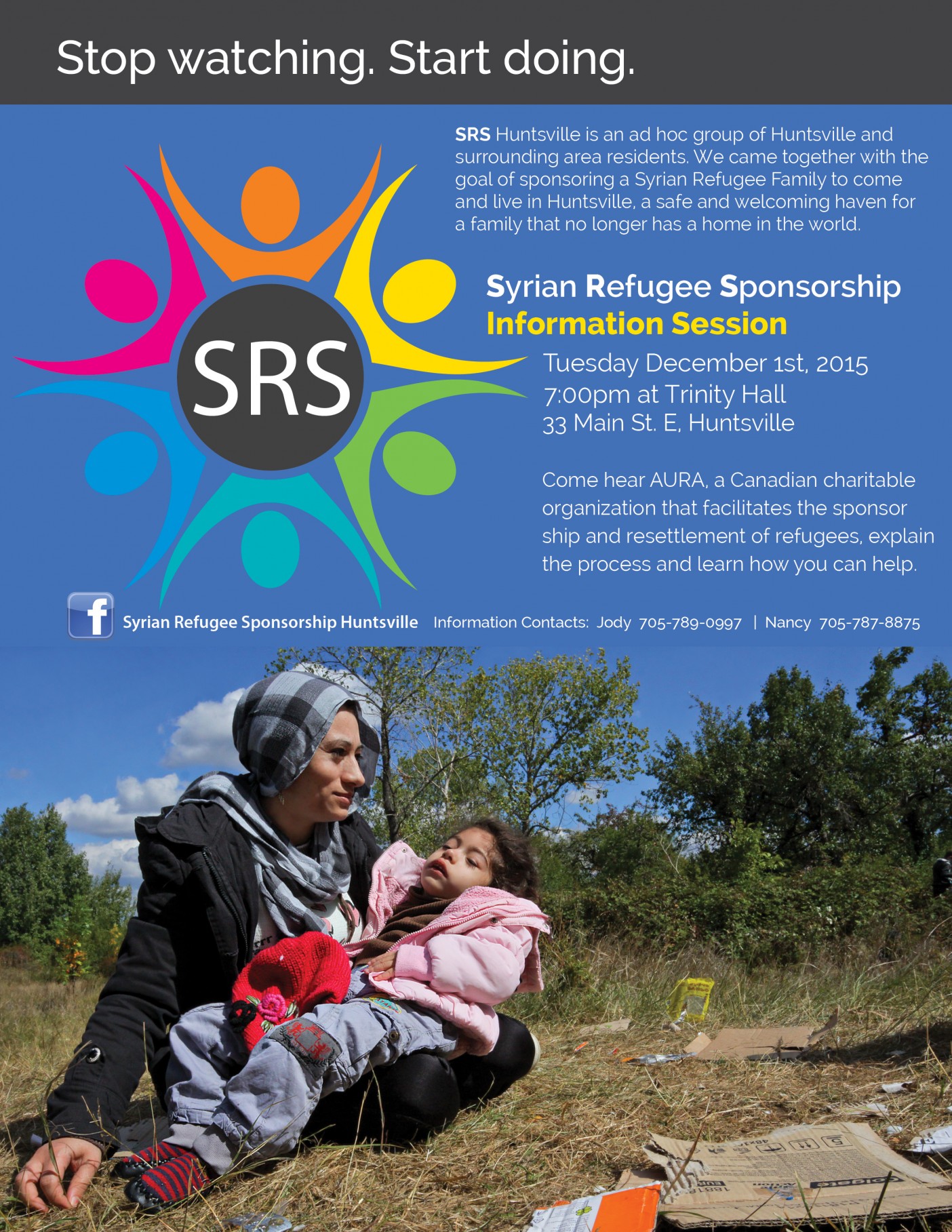