You are here: Home / Feature / Sorting it out: Meet Ralph Gibson

The Salvation Army has a team of volunteers who work tirelessly to bring joy into the homes of those less fortunate at Christmas time. It’s an annual undertaking that requires a lot of time and a lot of effort. There’s a common theme among these unsung heroes: they are there to give hope and many of them do it quietly and don’t need a pat on the back or reassurance that they’re doing a good thing. Ralph Gibson is one of those people…

It’s a big job but somebody’s got to do it.

Ralph has been organizing the Salvation Army’s Christmas food hampers for hundreds of local families in need for the last five years. And as big and as hectic and as time-consuming as it is, he doesn’t mind doing it. In fact, it’s an annual undertaking he thoroughly enjoys. There’s a lot of work to do but he certainly doesn’t fret. Nor does he stress or get overwhelmed or get bent out of shape. It always gets done. Ralph leads a team of dedicated volunteers who find it in their hearts, year after year, to put whatever they have to do on hold to make the season bright for those who are less fortunate.

In the few years that he’s been doing it, he’s watched the numbers steadily increase. More and more families are in need. That’s a sad reality, he says.

He knows there are others out there who won’t ask for help even though they desperately need it. Perhaps they have too much pride. But if they could swallow their pride and ask, without a doubt the Salvation Army would help them.

Ralph was born and raised in Hamilton but the Salvation Army has been a constant in his life. Although he regularly attended church his whole life, he never really knew the extent of how the Salvation Army operated. Not until he came here, that is. When it came time for Ralph to retire, he and his equally awesome wife Cathy decided to plant new roots in Huntsville.

They couldn’t have picked a better town. They love it here. And instead of finding a part time job to keep busy, Ralph decided it was time to give back. He sort of stumbled into volunteering at the Salvation Army. But it was probably meant to be anyway. He believes in what the Salvation Army stands for and its mandate Giving Hope Today is one the organization clearly delivers.

“It’s surprising how many people think the Salvation Army only helps homeless people,” says Ralph. “We don’t just help the homeless. We help people who are working and are struggling to pay their bills and make ends meet.”

From the moment the food bins go out around town to collect non-perishable items from the public — the first Wednesday in December; this year it fell on the 6th — Ralph is at the Salvation Army. He’s there every single day, arriving usually around 8 a.m. and stays for most of the day. He also takes it upon himself to do random pickups if requested. The word ‘no’ isn’t really in his vocabulary. He’s there to do whatever he can. As the volunteers trickle in over the course of the day, Ralph assigns them various jobs in the building’s giant sorting room. One thing that’s evident is the camaraderie between the volunteers. They laugh, they joke, they eat lunch together. It’s like one, big, happy family. And there’s a common theme among them: everyone who is pitching in is doing it out of the goodness of their heart. 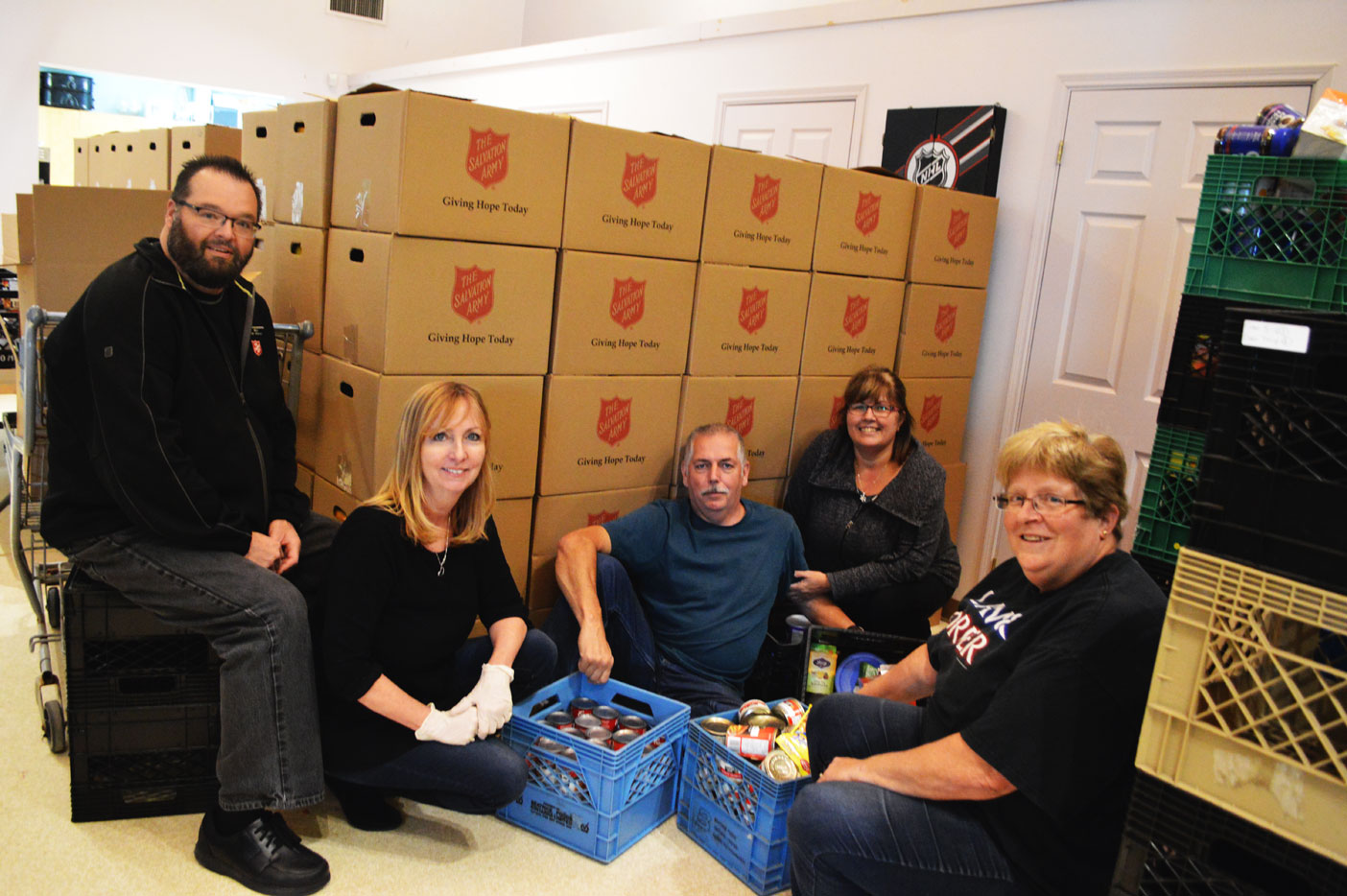 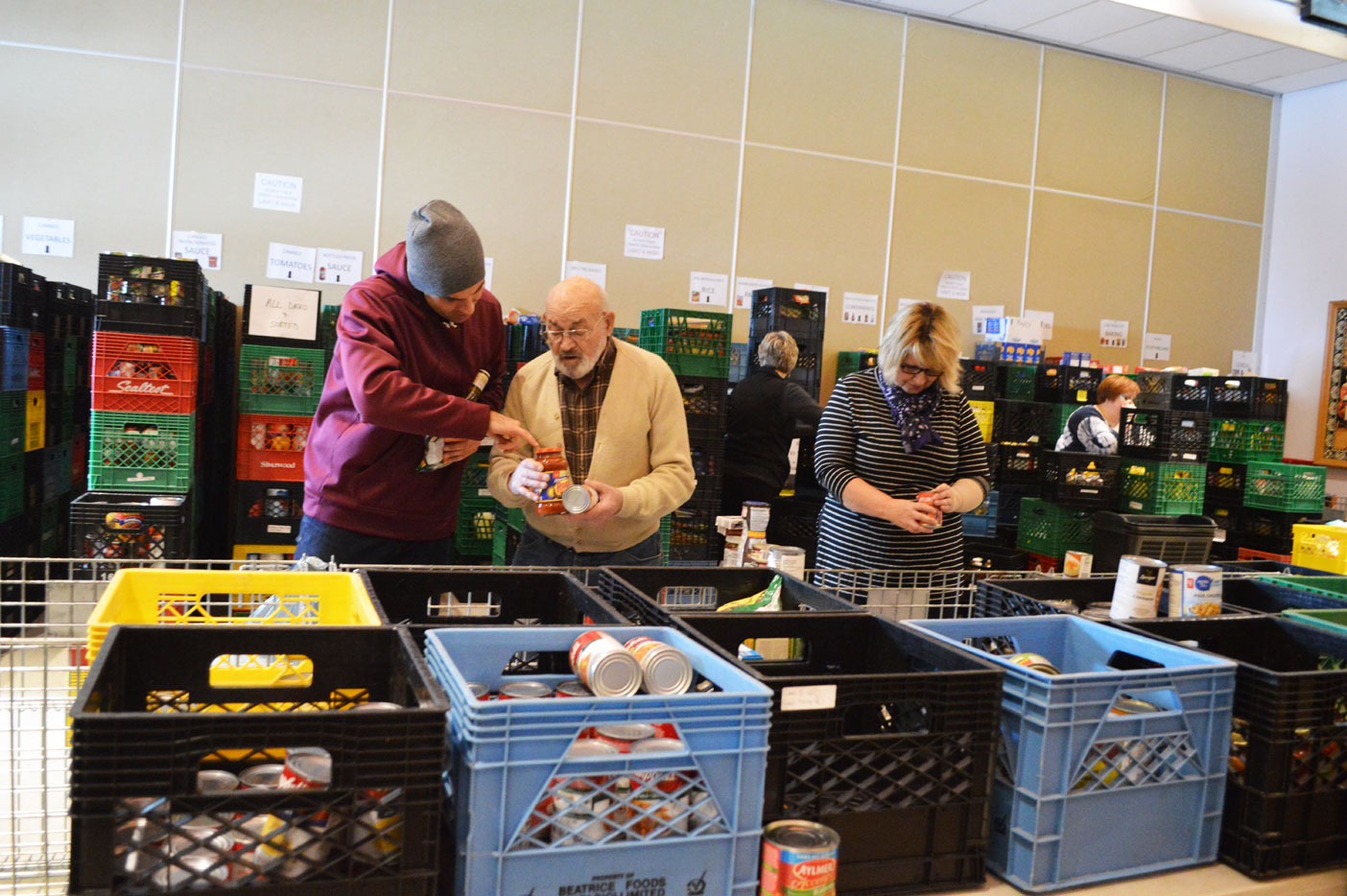 Above left: Salvation Army Huntsville’s Major Darren Wiseman (left) with a handful of his trusty volunteers (from left) Carolann Mckay, Ralph and Cathy Gibson, and Pauline Grimes. Without these kind-hearted folks, the Christmas hampers wouldn’t be as amazing as they are.
Above right: There’s a whole system in place in the sorting room at the Salvation Army. The amount of food donations that came in is a testament to the generosity of the town. Volunteers check expiry dates and sort the items in bins. It’s a long process but the hard work of many volunteers gets the job done.

It’s very rewarding. You’re doing what you can to make a difference. When we first moved here we would travel in November. The one year we came back and everyone said what we were missing by not being here. I won’t miss it now. It’s that important. We reschedule when we go away because it means something to us to be here.

Last year, volunteers put together more than 260 Christmas hampers complete with a turkey dinner (with all the fixings). This year, there will be over 300 hampers going to families in need. The need seems to be growing at an alarming rate. The fact that the Salvation Army is able to meet the growing demand is simply a reflection of the generosity of the people in this town

“We get people coming through the doors every day and it breaks your heart to see what they’re going through. It’s hard to see the need that’s out there, but it’s a blessing to be able to help.”

However, what really warms Ralph’s heart is when he hears from people who have been helped, who are generally extremely gracious that they’ve been able to turn their lives around and offer to volunteer. That, says Ralph, adds another rewarding element to his job.

Stepping up to the plate to give some of his time to help the community isn’t something he’s doing for any sort of recognition. Ralph does it because he wants to and because he can. It’s about helping those who need it. Especially at Christmas. It’s a special time. A lot of love goes into the Christmas hampers that are given to families. There’s a bit of everything and then some extras. Ralph has seen despair turned into joy handing one over to a family in need.

He speaks highly of everyone he works with at the Salvation Army, and that includes staff and the volunteers.

“It’s an amazing team to be a part of,” he says. “As I like to put it, my volunteers make me look good.”

And even when Christmas is over, when it’s well into the new year, Ralph will continue to stop by and lend a hand. It’s become his home away from home and his foot will always be in the door.