You are here: Home / News / Residents worry about size of Deerhurst redevelopment

Skyline’s expansion plans for Deerhurst Resort are too big. That’s what the Huntsville and District planning and economic development committees heard from members of the public at a joint meeting held Aug. 12.

Neighbouring residents expressed concerns about the traffic congestion both on land and water, the effect the proposed development would have on services and property values in the area and the overall impact a development of its size would have on the general ecological, cultural and economic wellbeing of Muskoka.

“We all know that National Geographic, two different years, said that Muskoka was one of the top vacation spots in the world. They didn’t list shopping, multi-tier condos and ‘anyone can have a piece of the lake for $199,000.’ They listed open spaces, clear water and vistas. I do not want it and I do not think you should give away our protection of those things to Skyline,” an area resident told committee members to applause from the audience.

About 80 people gathered at the Active Living Centre to hear from municipal staff and Skyline representatives about the next set of approvals sought to take the planned development expansion to the next level.

An amendment to Huntsville’s Official Plan, giving a green light in principle to the Deerhurst Village Resort development concept, was approved last fall. The Official Plan policies would permit another 486 apartment-style residential units, a hotel containing 156 hotel units and up to 4,500 square metres of commercial retail space. 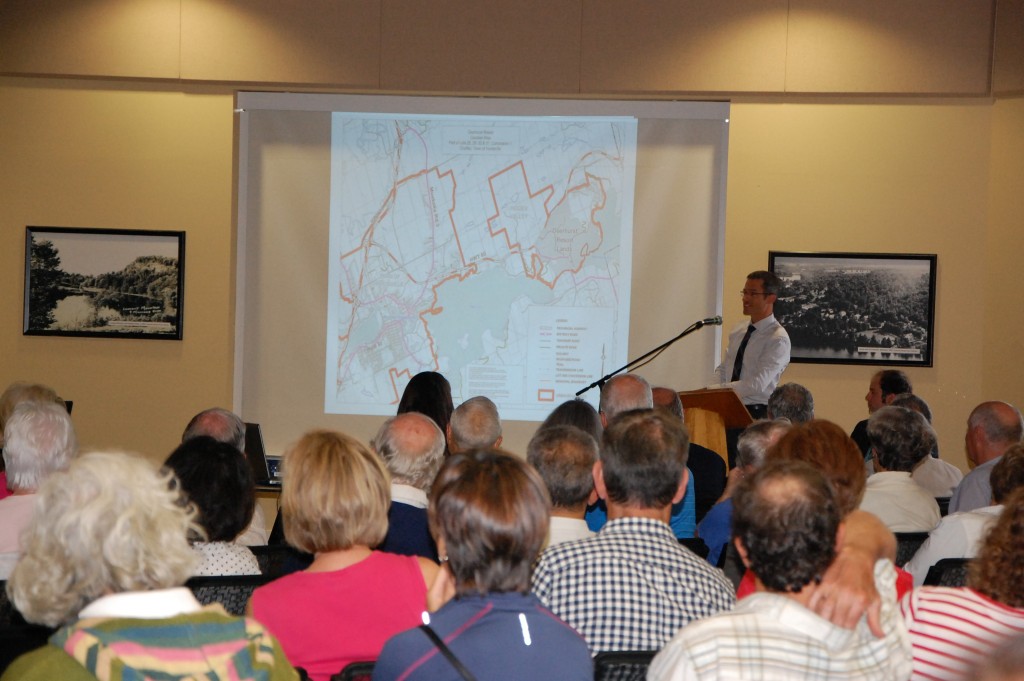 “We think it’s important to keep reminding each of you that the Deerhurst Village proposal is a very large development, in fact the largest development in Muskoka history,” Rob Hurst, president of the Peninsula Lake Association, told the joint committee.

The Association has been working on the project for the past three years and is part of an extended organization referred to as the Deerhurst Working Group. The group is made up of resident associations from Woodland Heights and Hidden Valley as well as neighbouring lake associations made up of Fairy, Vernon and Lake of Bays.

He said his own membership is divided on the issue, while there are those who vehemently want the development stopped; others support it as a much-needed economic development for the area.

He applauded Skyline’s response to concerns expressed about the protection of the ecological and historical value of the canal between Peninsula and Fairy lakes.

“Skyline has in fact expanded the conservation zone along the canal, between the bridge and the wetlands.”

Other concessions by Skyline include a maximum building height of four storeys rather than the five previously proposed, despite the fact that many still think that’s too high.

“We don’t want to find a situation when one of these parcels is sold off in a year or two or five and a developer comes back and says ‘well you know what, I know it’s four storeys but I need five or more. We think this is an important principal to protect our Muskoka tree line and not just for this development but for all development across Muskoka,” said Hurst

Skyline has also agreed to a tree buffer to hide the four condominium buildings proposed for the west riverfront.

“We believe these trees need to be planted now, by professional arborists, so the trees are established and growing long before the condominiums go up,” said Hurst.

Traffic congestion was mentioned several times by those who took to the microphone. One area resident said traffic studies she observed were conducted during off-peak hours.

Hurst said his group shares concerns raised about traffic, road conditions and parking congestion and does not believe enough study has been done on these issues.

Questions were also raised about whether Skyline, which is seeking approval to subdivide the proposed development area into an additional seven parcels, is planning to stay for the long-haul.

“None of you asked is Skyline here for the long-term,” Hurst told committee members. “Because of course the hotel and the golf courses are for sale…These seven development parcels, which likely will be sold off, means that Huntsville and the District must be ever more vigilant to ensure that all of the details and obligations that were negotiated and approved … are implemented accurately and with no fuss,” said Hurst.

Other concerns expressed involve the resort’s maintenance sheds, described as an eyesore. Hurst called for the removal of the sheds as part of any subdivision approval. Skyline vice president of development Paul Mondell, said the sheds would be removed from the Canal area and located elsewhere pending conversations with staff.

“Deerhurst must continue to evolve as a more sustainable economic generator and in our opinion must do so through an expanded range of existing and new amenities in response to an increasingly sophisticated clientele, which is seeking a more diverse range of experiences,” explained Mondell, adding that development would take place in stages pending economic outlook.

Prompted by questioning by District planning committee member and mayor of Lake of Bays Bob Young, Mondell said any part of the development is for sale at any time.

The zoning amendment application and subdivision of lands being sought by the proponent are expected to return to both Huntsville and District planning and economic development committees for recommendations to councils at a later date. Huntsville will revisit the rezoning application at its next planning committee on September 16, 2015.